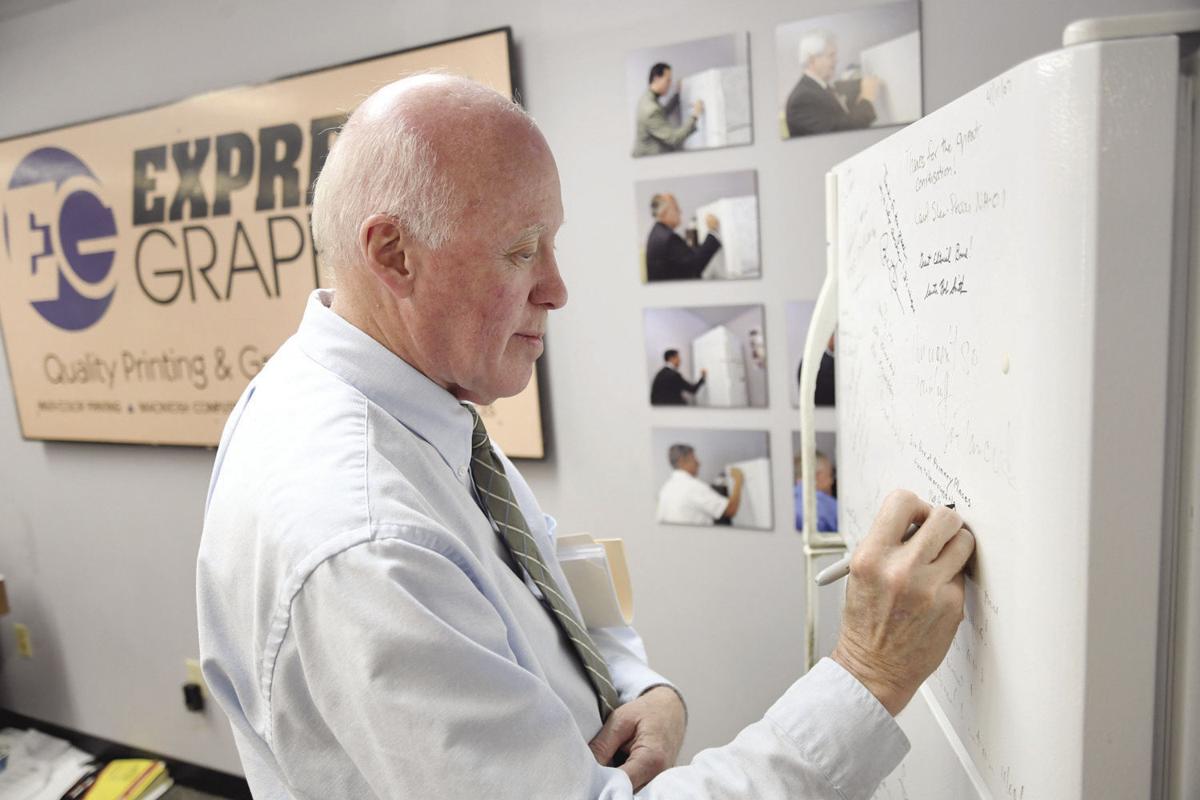 Secretary of State Bill Gardner signs "Icebox One" following a chat with Sun staff during a recent visit. The Sun's refrigerator has been signed by many presidential candidates through two primary cycles. (JAMIE GEMMITI PHOTO) 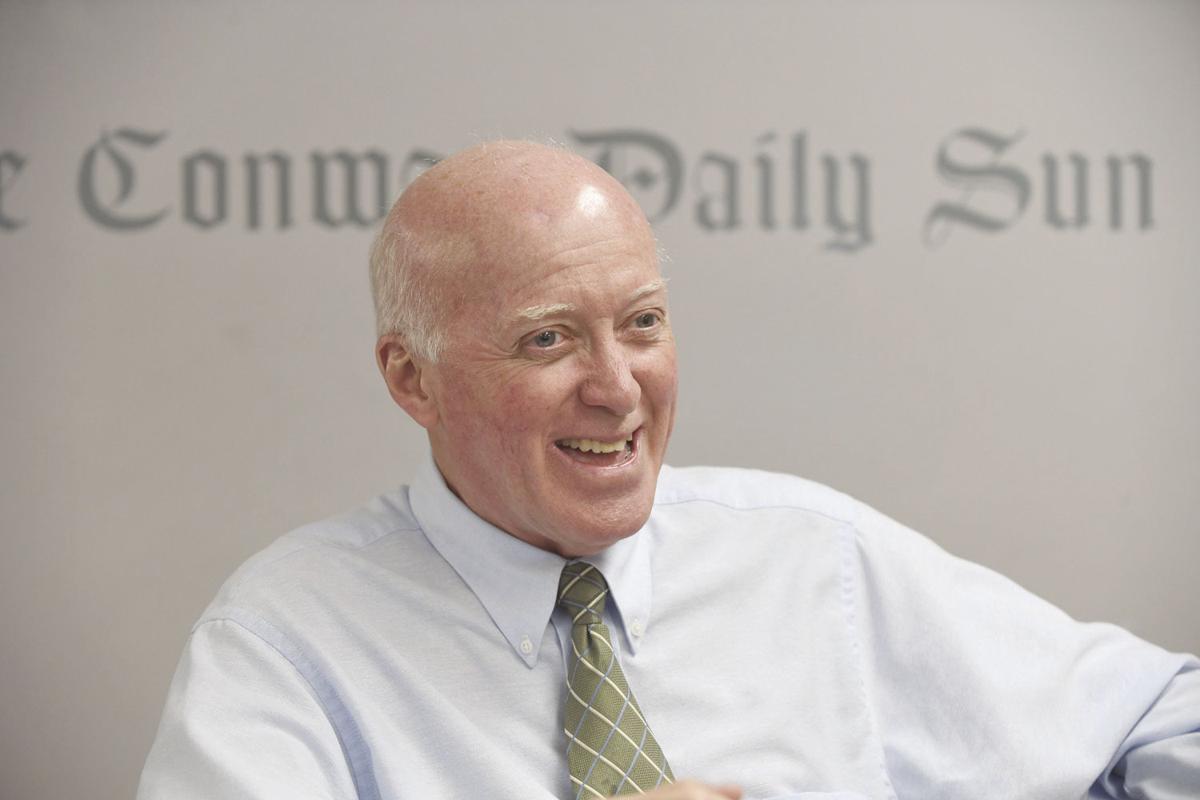 Secretary of State Bill Gardner signs "Icebox One" following a chat with Sun staff during a recent visit. The Sun's refrigerator has been signed by many presidential candidates through two primary cycles. (JAMIE GEMMITI PHOTO)

CONWAY — New Hampshire Secretary of State Bill Gardner regaled the Sun's editorial board Aug. 14 with stories about his four decades of service and talked about the vital role Granite State voters play in defending the first-in-the-nation primary.

Members of the Legislature will vote for whom they want to be the next secretary of state following the Nov. 6 election.

Gardner, of Manchester, is the nation’s longest-serving secretary of state and the widely recognized guardian of the Granite State’s first-in-the-nation presidential primary. He has held the office for the past 42 years.

Gardner was in Wolfeboro and Conway on Aug. 14  to speak to election officials. He also agreed to speak with the Sun in his first ever editorial board meeting.

During the nearly two-hour session, Gardner spoke with obvious enthusiasm about not only for the job but also the history of the office.

After nearly an hour of stories, he was asked what is the single most important thing he wanted Sun readers to know.

He also vowed to never create any political action committees or raise money for a campaign to win the Legislature's approval every two years.

Apparently, Van Ostern is taking a different approach. According to a recent NHPR report, the Democrat was in Boston earlier this month raising money for his bid to unseat Gardner. Two years ago, Van Ostern was the Democratic nominee to be New Hampshire's governor (losing to Chris Sununu).

"There is no need for that in an office like this," Gardner said of raising money to be elected secretary of state. "You are not running on a party ticket.

"That's the kind of office it is, and I won't want to see it change."

The job includes overseeing state and federal elections and proofing 9,000 unique ballots for towns and cities across the state.

At the end of the meeting, Gardner and the Sun discussed the first-in-the-nation presidential primary, which New Hampshire has held since 1920. He said he has “a role” in protecting it from the other 49 states, but he doesn’t do it on his own.

The secretary of state schedules the dates for the Democratic and Republican primary elections ahead of all the other states. It's a date he keeps under wraps. "There have not been a lot of leaks," he quipped.

The reason his office sets the date is because it's freer from political influence than the governor or a legislative committee, for example.

He said in the 1990s, two states, one of which was Arizona, attempted to take the first-in-the-nation primary away from New Hampshire. But a Center Harbor woman called him and said her brother was the governor of Arizona and that she would "take care of him.” A month later, Arizona dropped its bid.

Gardner feels he’s gotten support from residents, candidates and even fate. “As Abraham Lincoln once said, ‘Just get me some lucky generals,’” said Gardner. “In life, there’s a lot of that.”

He said in the 2016 primary, New Hampshire saw a turnout of about 52 percent, the highest in the nation. He said the next highest was Wisconsin (49 percent). The average state turnout was 29 percent.

Gardner said only about 4 percent of voters voted by absentee ballot.

He said presidential candidates tell him that of all the primaries, New Hampshire is the one they remember best.

He said when Donald Trump came to fill out his candidacy papers for the Republican Primary in 2015, Trump seemed interested in Gardner telling him about how some towns still have the same voting machines they had 135 years ago. Gardner told Trump that a decade prior, the feds had given states billions of dollars for modern equipment, much of which already has been thrown away as outdated.

Gardner also told Trump that he was filling out paperwork on the desk of the man who wrote the bill to create the New Hampshire primary.

After doing the paperwork, Gardner said Trump pulled an envelope out of his jacket pocket and held up a check, explaining that he was told he had to use a bank check (to file his candidacy fees).

“‘I can tell you, if I used my personal check I have more money in my account than this bank does,’” said Gardner, quoting Trump.

Gardner also spoke about how New Hampshire's elections would be difficult for computer hackers to invade, for a couple reasons.

For one thing, state law specifies that residents must vote on a paper ballot rather than on computers. The vast majority of municipalities use an optical reader machine to count them. And polling takes place on a town level, not the county level, in a central location and connected to the internet as with other states.

"‘I would do just what New Hampshire does,’" Gardner quoted Hursti as saying.

The story has been amended to say that former state Rep. Peter Sullivan (D-Manchester) is also running for secretary of state.