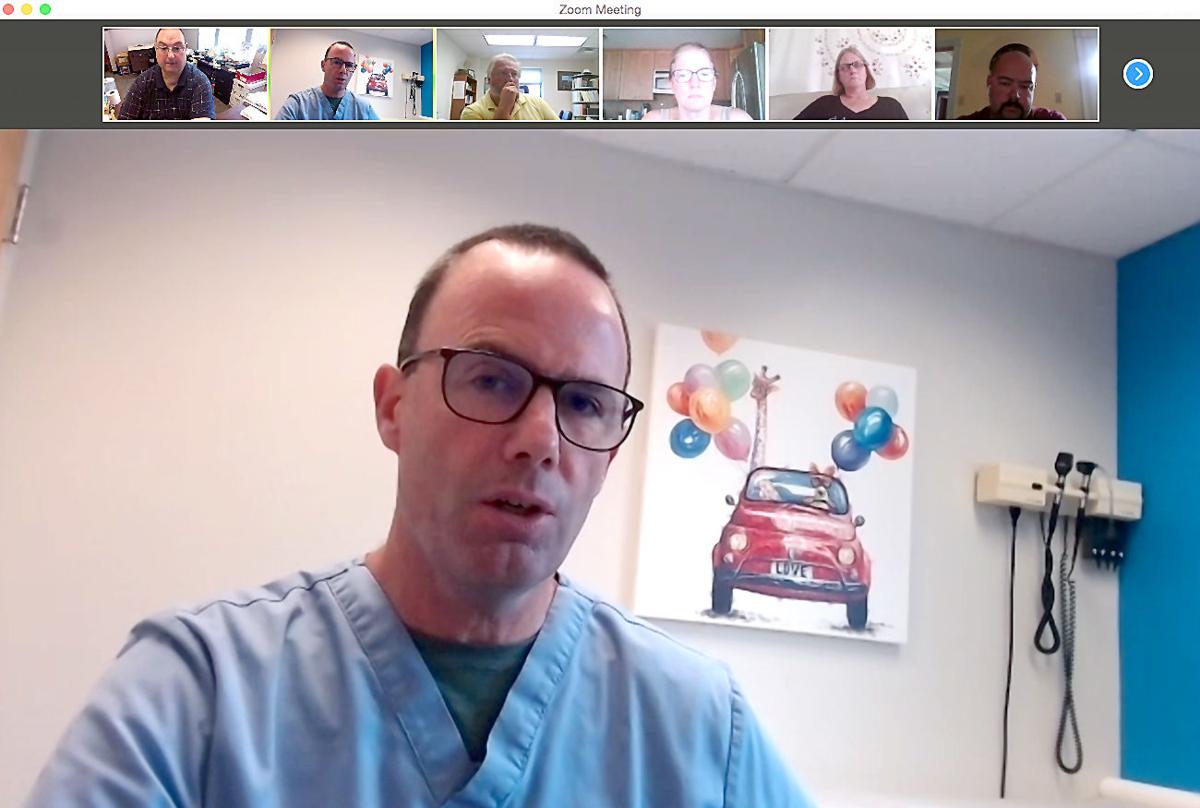 "I think we have the backing of science and the medical community to do what we're trying to do here,” Dr. Rich Laracy of the Saco River Medical Group said Wednesday with regard to the American Academy of Pediatrics releasing a statement encouraging schools to return in person if possible, during Wednesday's Zoom meeting of the SAU 9 Re-Entry Committee. (LLOYD JONES PHOTO) 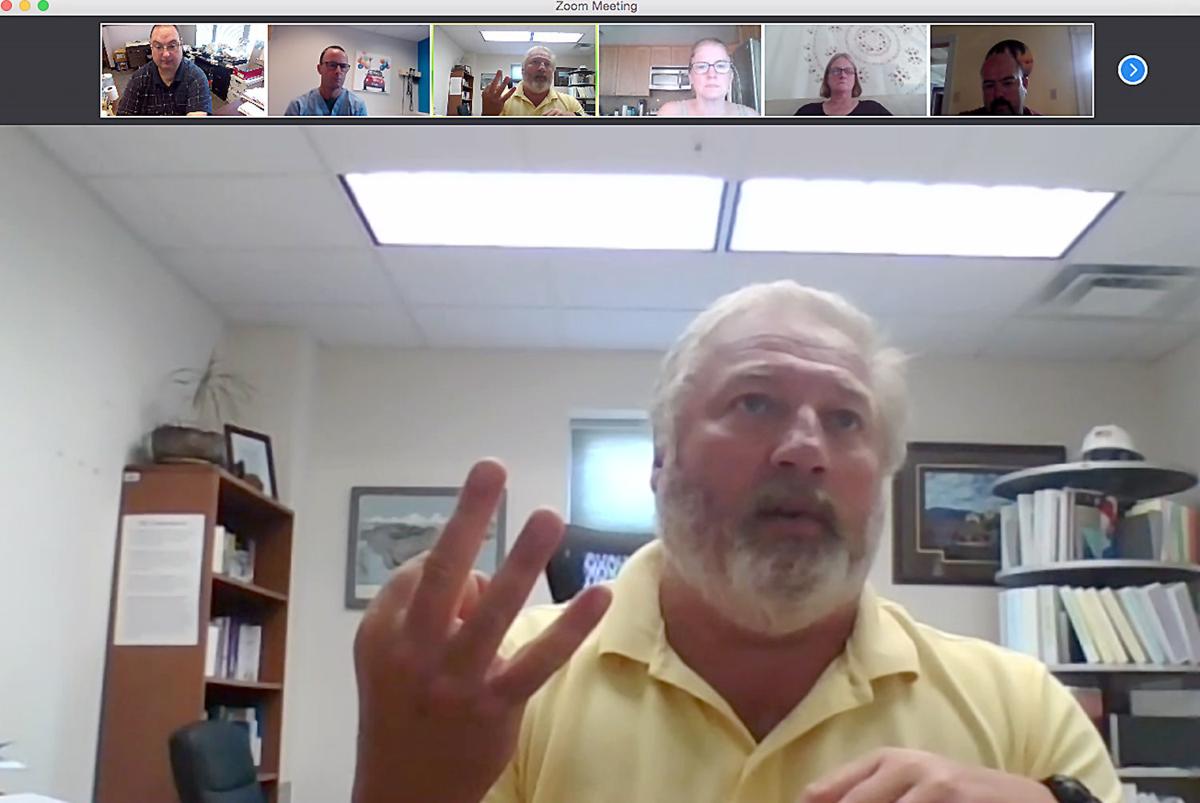 Superintendent Kevin Richard said the SAU 9 Re-Entry Committee is looking at three options — a face-to-face return to instruction; the possibility of a hybrid form of in-school and remote learning; and remote learning, which children and parents did for the final 12 weeks of the 201920 school year during Wednesday's Zoom meeting. (LLOYD JONES PHOTO)

"I think we have the backing of science and the medical community to do what we're trying to do here,” Dr. Rich Laracy of the Saco River Medical Group said Wednesday with regard to the American Academy of Pediatrics releasing a statement encouraging schools to return in person if possible, during Wednesday's Zoom meeting of the SAU 9 Re-Entry Committee. (LLOYD JONES PHOTO)

Superintendent Kevin Richard said the SAU 9 Re-Entry Committee is looking at three options — a face-to-face return to instruction; the possibility of a hybrid form of in-school and remote learning; and remote learning, which children and parents did for the final 12 weeks of the 201920 school year during Wednesday's Zoom meeting. (LLOYD JONES PHOTO)

CONWAY — “Schools Must Open In The Fall!!!” That was the message President Donald Trump tweeted out Monday morning, which quickly received a tweet from National Education Association President Lily Eskelsen Garcia: “You forgot to add the word, ‘Safely.’”

Whether or not schools can open and do so safely has become a national debate this week.

The SAU 9 Re-Entry Committee with its nearly 50 members met Wednesday via Zoom. The committee hopes to come up with a re-entry plan for the public by the first week of August. While Superintendent Kevin Richard and the community members hope classes can resume this fall, they may look quite a bit different.

The committee is looking at a face-to-face return to instruction; the possibility of a hybrid form of in-school and remote learning; and just remote learning, which children and parents did for the final 12 weeks of the 2019-20 school year.

The listed goal of the committee is “to develop a dynamic operational plan for the return to SAU 9 school facilities for students and staff members,” and “this will include multiple paths for a return.

The first day of classes is scheduled for Monday, Aug. 31. Teachers are set to return Aug. 26.

“One of the things that we talked about with the administrators this morning is we can’t get paralyzed by analysis on this project; otherwise, we won’t be able to move too far,” Richard told the committee at the start of the 80-minute meeting.

He added: “I have the confidence that these plans that we’re making are going to be really good plans, the best that we can and (to be as safe) as we can.”

With the county doing relatively well in terms of low cases of COVID-19, Richard is optimistic school can happen, but he also added, “things change from week-to-week, even day-to-day.

“If people want to make this return happen, it absolutely can happen,” he said. “And I think we can do a very good job of that. It’s going to be inconvenient for some folks.”

The American Academy of Pediatrics on June 29 took the position that students should be in classrooms for in-person learning as soon as possible.

“The importance of in-person learning is well-documented, and there is already evidence of the negative impacts on children because of school closures in the spring of 2020,” the group representing 67,000 pediatricians wrote. “Lengthy time away from school and associated interruption of supportive services often results in social isolation, making it difficult for schools to identify and address important learning deficits as well as child and adolescent physical or sexual abuse, substance use, depression and suicidal ideation.”

He added: “I was surprised, and it’s encouraging. So I think we have the backing of science and the medical community to do what we’re trying to do here.”

“It was huge when that came out,” Richard said. “It was like, OK, because the easy default is to say we’re going to stay remote (learning). There are so many different reasons to, but if we can come back, we should come back is really the piece. It’s easier for us to say we plan on coming back and then go to remote instruction in August, then say, ‘Well, we’re going to start remotely at the end of August, and then try to plan for coming back.’ I think it’s easier to go to unplug than it is to try and plug it back in.”

Richard has been in constant communication with the three local unions (Conway Education Association, Conway Education Support Personnel and American Federation of State, County and Municipal Employees) ,keeping them apprised of where things stand and collecting input from each.

“The biggest thing I hear are concerns from people who have pre-existing or existing conditions that make them nervous,” he said. “Whether ‘I am 65 years old, I’m not sure I want to spend my last couple of years teaching and put myself at risk when I’m getting close to retiring.’ Or, you know, ‘I’m married to somebody who has this condition that may be impacted.’”

NEA-NH, in a June 29 release, shared the results of a survey it conducted with its membership. “More than 75 percent of the educators surveyed were not comfortable returning to the classroom without a vaccine or effective treatments,” the release states. “One in three were very uncomfortable heading back to the classroom under those conditions.”

Also, “More than 80 percent of the educators answering the survey were concerned about their health and safety if schools were to reopen; 40 percent very concerned.”

“Schools are not designed for social distancing,” said Megan Tuttle, NEA-New Hampshire president. “Classes and hallways are already overcrowded, and many of our schools have inadequate HVAC systems resulting in poor air circulation. These are prime COVID-19 transmission conditions. If we’re not ready to make the investments necessary to make our buildings safe, then we’re not ready to reopen them.”

In another release Tuesday, Tuttle stated: “We will not be bullied by the President of the United States and his Secretary of Education (Betsy DeVos) to open our schools before they are safe. No president should threaten the parents of children with higher taxes by de-funding public schools just because they want their children and the people who educate them safe and protected during a pandemic.”

The state Department of Education’s task force unveiled its recommendations to Gov. Chris Sununu on June 30 for schools opening this fall. The task force urged districts to prepare for multiple scenarios — in-person learning with new safety protocols; remote learning similar to what happened the final 12 weeks of the past school year; and a hybrid of the remote and in-person education.

The task force develops its recommendations from the input of six workgroups — “a focus on instruction, student wellness, operations, technology, student voices and associations.”

Appearing on WMUR’s “Closeup” on Sunday, DOE Commissioner Frank Edelblut talked about the task force and shared his hopes for the 2020-21 school year.

“We expect to be open for in-person instruction in September,” he said. “That being said, we know some individuals, some students, may have concerns. It may be they themselves have underlying health concerns or they live with somebody or know somebody who has those risks. We want to make sure we can accommodate all of our staff and students who are coming back into that learning environment.

“That will be accommodated by offering a hybrid learning opportunity for those students or educators so they can engage in learning remotely,” Edelblut said. “That will look different in different school settings. Some of that may be we have a school district that is going to be offering in-person instruction across the board for most of the students, but they may have an educator, who perhaps because of underlying health conditions cannot engage back in the school, but they may run a remote instruction opportunity for those students.”

Edelblut does not envision educators having to “do double-duty,” where they teach a class in-person and remotely. “You want to make sure everyone has a workload that is sustainable and that they can be successful with.”

Tele-Talk question: Should classrooms reopen regardless of the pandemic?

The SAU 9 Re-Entry Committee is currently coming up with a practical plan for schools to reopen to students by the end of August. Superintende…