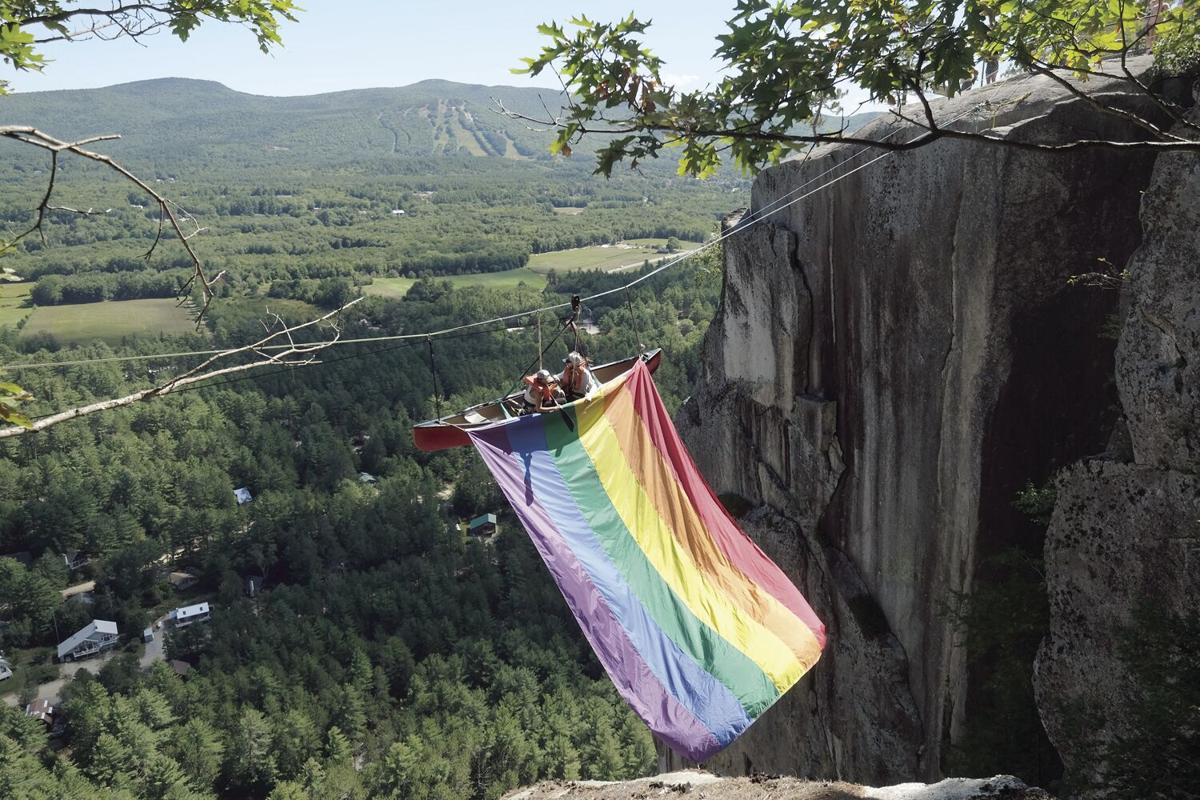 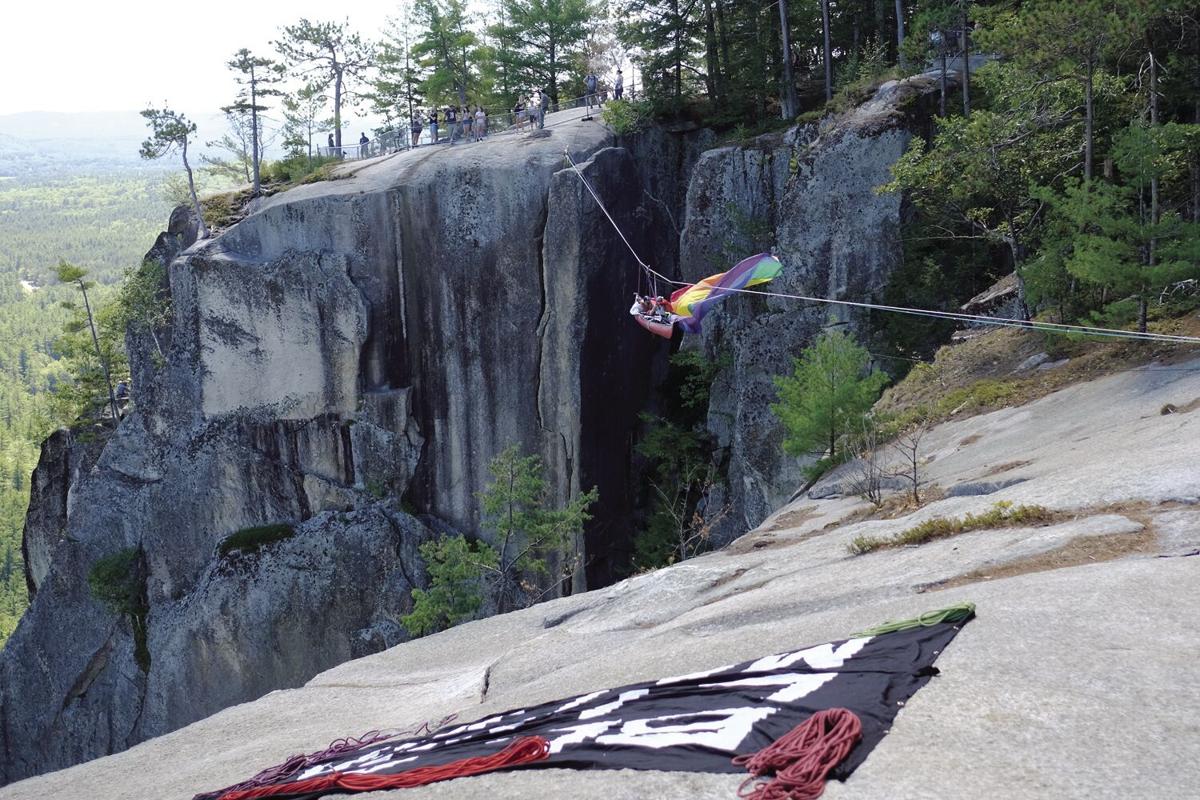 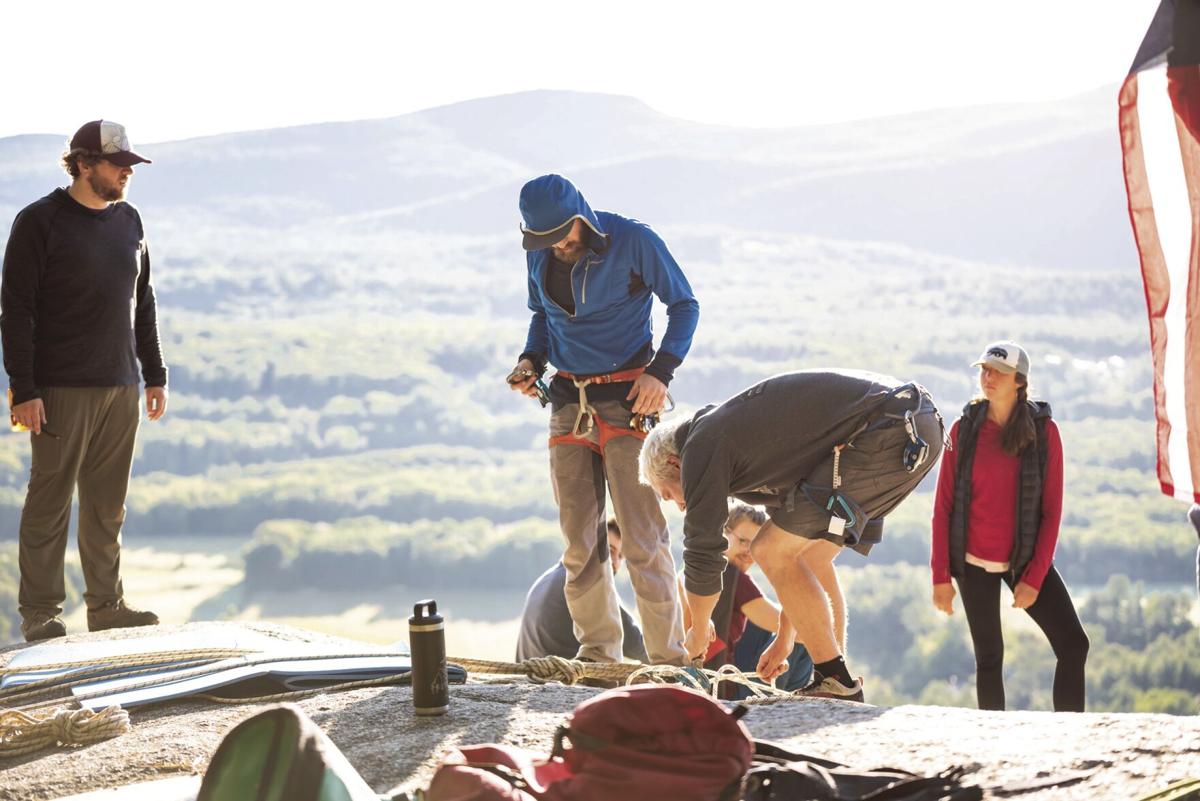 Freddie Wilkinson (bending) helps get the ropes together for the protest as Brady Callahan (second from left) tries on climbing gear. Josh Laskin (left) and other supporters look on. (COURTESY JOSH LASKIN)

Freddie Wilkinson (bending) helps get the ropes together for the protest as Brady Callahan (second from left) tries on climbing gear. Josh Laskin (left) and other supporters look on. (COURTESY JOSH LASKIN)

CONWAY — In a protest stunt that caught the attention of police, N.H. State Parks and many tourists, local protesters strung a canoe, rainbow flag and Black Lives Matter banner 350 feet in the air in front of Cathedral Ledge in North Conway last Saturday.

Protest leader Quddus Snyder, 41, of Eaton said the League of Voters for Equality (LOVE) and members of the greater Mount Washington climbing community were responsible for the daylong event, dubbed “Climb for Equality.”

“The idea was to create a spectacle on Cathedral Ledge with climbers and the large banner flags and the flying canoe to raise awareness and support the national cause for equality and also bring attention to the local scene,” said Snyder.

“The outdoor community wants to make it known we welcome diversity.”

The Bartlett police and a State Parks employee did come, but they allowed the event to continue, said Snyder, noting, “There wasn’t a clear enough rule shut us down.”

Bartlett Police Chief Chris Keaton confirmed that officer David Courville responded but said the “forest service” was in charge of handling the situation.

Calls and emails to State Parks were not returned by deadline.

The ropes and the flags and all the gear involved were all taken down and packed up by 8 p.m. Nothing was damaged in order to make the stunt happen, Snyder said.

“The climbing community is very serious about protecting this shared resource,” said Snyder, adding the climbers clean up the cliffs every year. “There is no vandalism no graffiti. If there is anything climbers take seriously, it’s stewardship of the cliffs.”

Serving as inspiration was a stunt that local climbers pulled off at Cathedral Ledge in 1986. Snyder said the idea came from Freddie Wilkinson of Madison, who Snyder described as an accomplished climber and author who has written for The New York Times and National Geographic.

“We wanted to re-create that stunt in 2020 with the additional meaning behind it which is the equality and civil rights message,” said Snyder.

He said the stunt was basically a “tyrolean traverse” with a canoe.

Wikipedia defines that as “a method of crossing through free space between two high points on a rope without a hanging cart or cart equivalent.”

The canoe was sent back and forth in the gap all day with groups of two sitting in it a half-hour at a time. He said hundreds of tourists walked to the top to watch from the viewing area. But Snyder said only climbers were allowed to ride the canoe.

“We had conversations with people about the meaning of the event and the message,” said Snyder, who said some of the tourists were people of color. “They were blown away by the stunt and highly entertained as well.”

However, the stunt was controversial and there’s been a “lively” debate about using the cliffs for politics on Facebook. “The vast majority of people agree with the message; where there is disagreement is the method of delivering the message,” said Snyder.

Among the critics was Zac Mercauto of Fryeburg, Maine, Carroll County vice president of the Trump campaign of 2016. Calling the stunt dangerous, he said it opens the door to other groups doing the same thing.

Snyder said ordinarily he wouldn’t want to see political flags on the cliffs but these are “extraordinary” times.

Snyder said to get the canoe suspended in mid-air, four climbing ropes were tied to about five trees on one side and attached to pre-existing rock-climbing bolts and fixtures on the other.

He said the first line is walked across, then you use that line to bring the other three across. When pulled tight, the ropes are out over the span. Pulleys were used to move the canoe.

The canoe and the gear were delivered Friday night. About 15 people arrived at about 5 a.m. Saturday and rigged it before sunrise.

Asked if the stunt was safe, Snyder said some of “valley’s leading rock climbers” were involved and they made sure it would be “very, very safe.” Snyder said he’s been climbing at Cathedral Ledge for 17 years but that he’s never seen as much traffic and tourists on Cathedral Ledge as there were Saturday.

The Sun asked Snyder whether any more protests/stunts might be on the horizon.

“I think we’ve got another one brewing,” said Snyder.

At first BLM is all about peaceful protests, but eventually it morphs into Burn Looting (&) Mayhem.

Anyone that's upset about the LBGT and BLM movements, obviously haven't lived in their world. Yes, all lives matter, but this isn't a movement for all lives. It's a black movement. A lot more people would understand if "Too" was added at the end of Black Lives Matter. I hope these movements bring equality and tolerance. It's long overdue.

No monument was shrouded. Ropes were tied to about five trees on one side and attached to pre-existing rock-climbing bolts and fixtures on the other. As for those that considered this stunt dangerous,,,,,,,,rock climbing is dangerous! So is adding fuel to an angry fire.

I agree that no natural monument should be shrouded with political ideology. In this case there was no shrouding of a natural monument. But, I would love to do something about Mt. Rushmore! Sadly, even if the presidents faces were taken off, Borglum's assault to the mountain will never bring back the Six Grandfathers that were naturally there. No one stopped that assault.

I think some of the words in these posts say a lot more then they intended to. Intolerance!

A quote from Freddie Wilkinson on why they did it

"You have to pass so many Trump signs on the way up here on Rt 16, we wanted people to know they're welcome in the Valley.... the difference is, the Trump signs support a presidential candidate and are on people's own property, nobody is hanging it off the ledge. The "woke" are as immature amd ignorant as they can get...

Thanks Angry White People for kicking off the comment section totally on brand. Happy to see that 'BLM has made it to the Washington Valley' - to my LGBTQ and BIPOC friends, I see you. Loved reading about how this idea came about, particularly in reference to 1986.

I’ve had just about enough of the outrageous behavior that’s going on here and in the rest of the country. Personally I couldn’t care less who one chooses to sleep with nor do I believe that one life matters more than another. I’m sick to death of hearing about LBGTQ and the BLACK LIVES MATTER MOVEMENT. Again, I don’t care who anyone has a relationship with nor do I think that one life is more important than any other. What I do care about is having things shoved down my throat. The constant barrage being forced on people is unacceptable. Yet, if anyone complains they’re labeled a racist or homophobe. I am neither. I just don’t feel the need to march and parade or pull ridiculous stunts to gain recognition of my beliefs or practices. I’m disgusted by the fact that a community monument like Cathedral Ledge was used in this manner. I’m also disgusted by the fact that people were put at risk of serious injury to pull this little stunt. It seems to me that there is only one side that is allowed to speak. If someone holds an opinion that differs from what is considered politically correct, they’re immediately attacked. Odd for a group of people who preach tolerance, don’t you think?

Nothing is shoved down your throat. Turn your head as we who oppose injustice and intolerance turn our heads away from the Maga hats and trump signs.

Well that is a typical slanted bit of reporting with one quote raising concern about mis-use of public property. I am appalled and dismayed that draping these banners was not stopped. Now kowtowing to BLM has reached Mt. Washington Valley.

Monuments of nature should never be shrouded in political ideology. Shame on the climbing community and others for using Cathedral Ledge as a political pawn. To this former rock and ice climber, the stunt was a despicable act of political zealotry that never should have been allowed.