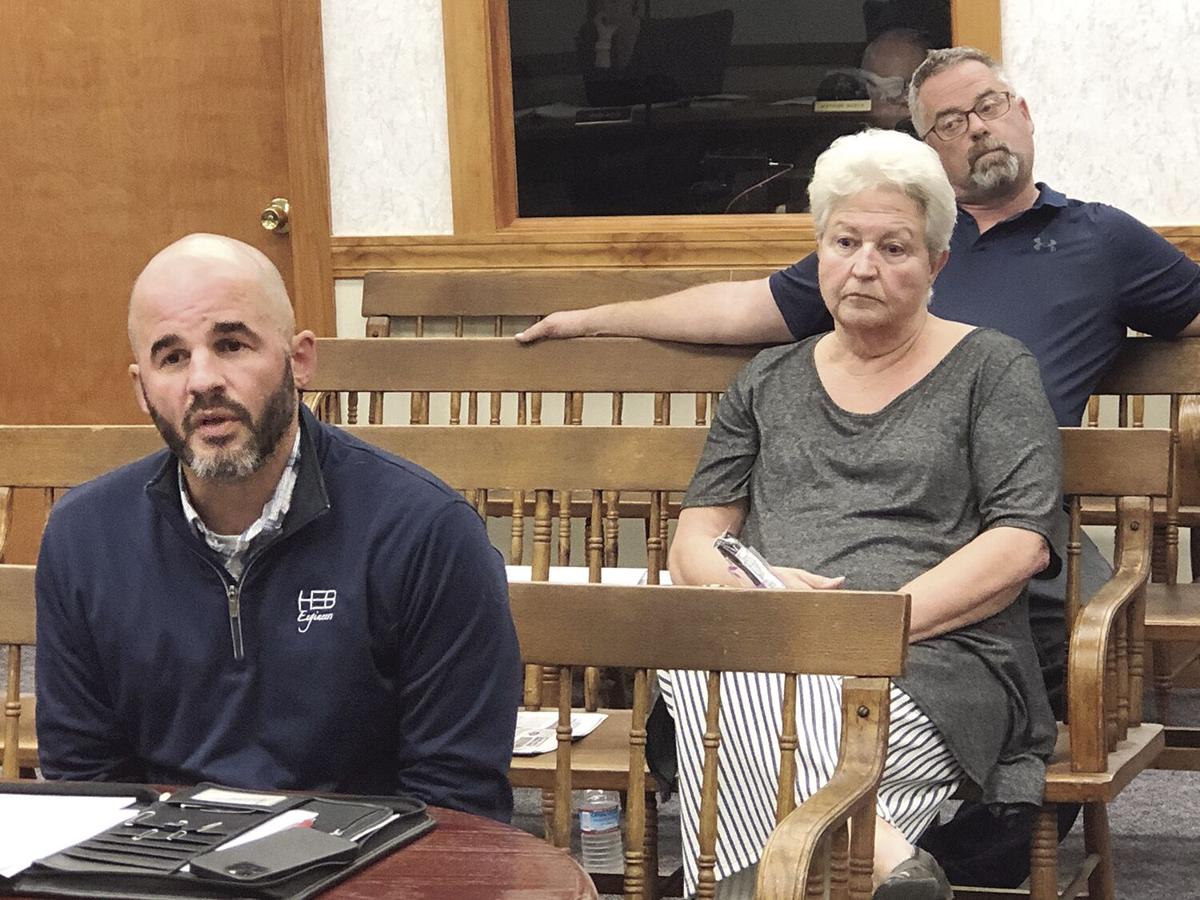 Project engineer Josh McAllister (foreground) of HEB Engineers speaks at the Conway Planning Board about the Redstone Group project planned for Technology Lane in Conway. Also in the audience (behind McAllister) is MWV Chamber of Commerce Executive Director Janice Crawford. (TOM EASTMAN PHOTO) 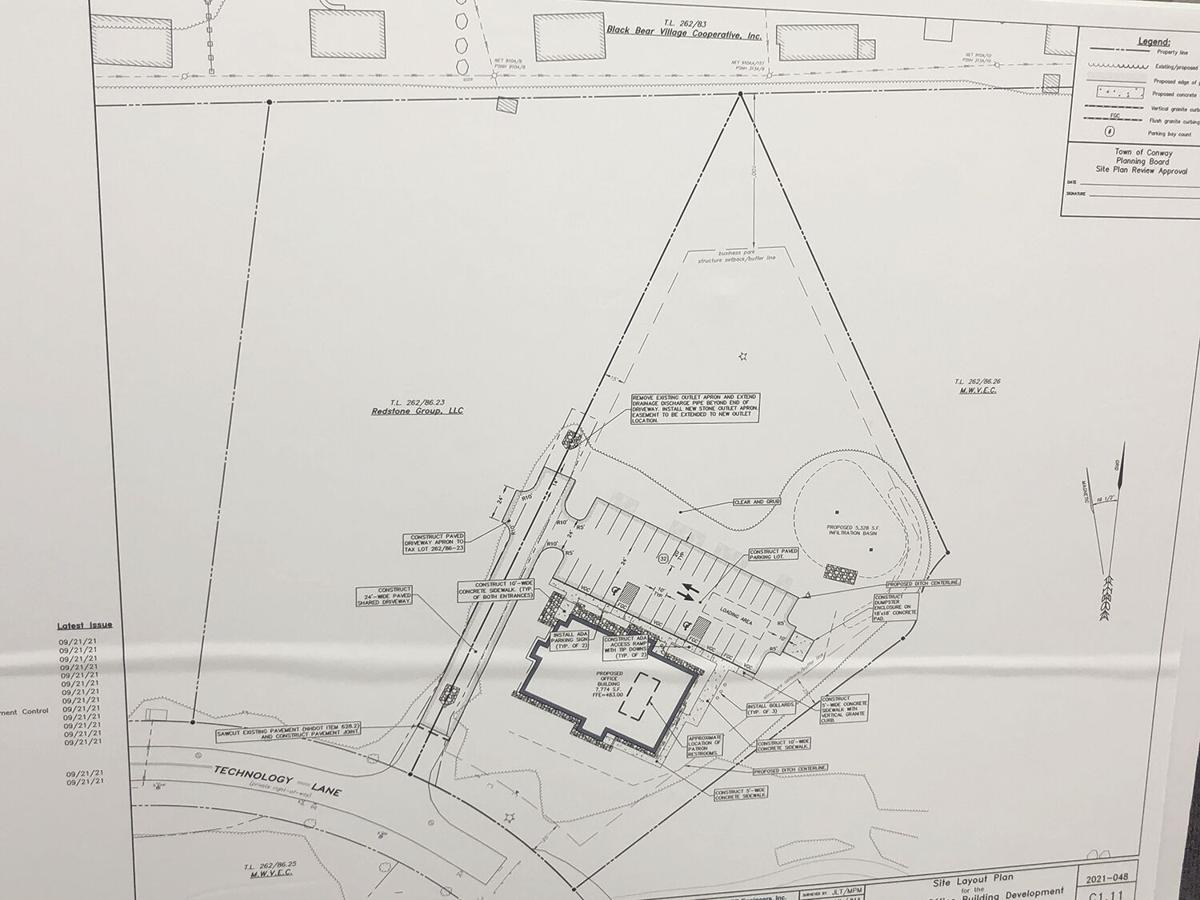 The Redstone Group, LLC of North Conway received conditional approval from the Conway Planning Board Oct. 14 to build a 7,774-square-foot office building with associated infrastructure on Technology Lane in Conway. (HEB ENGINEERS) 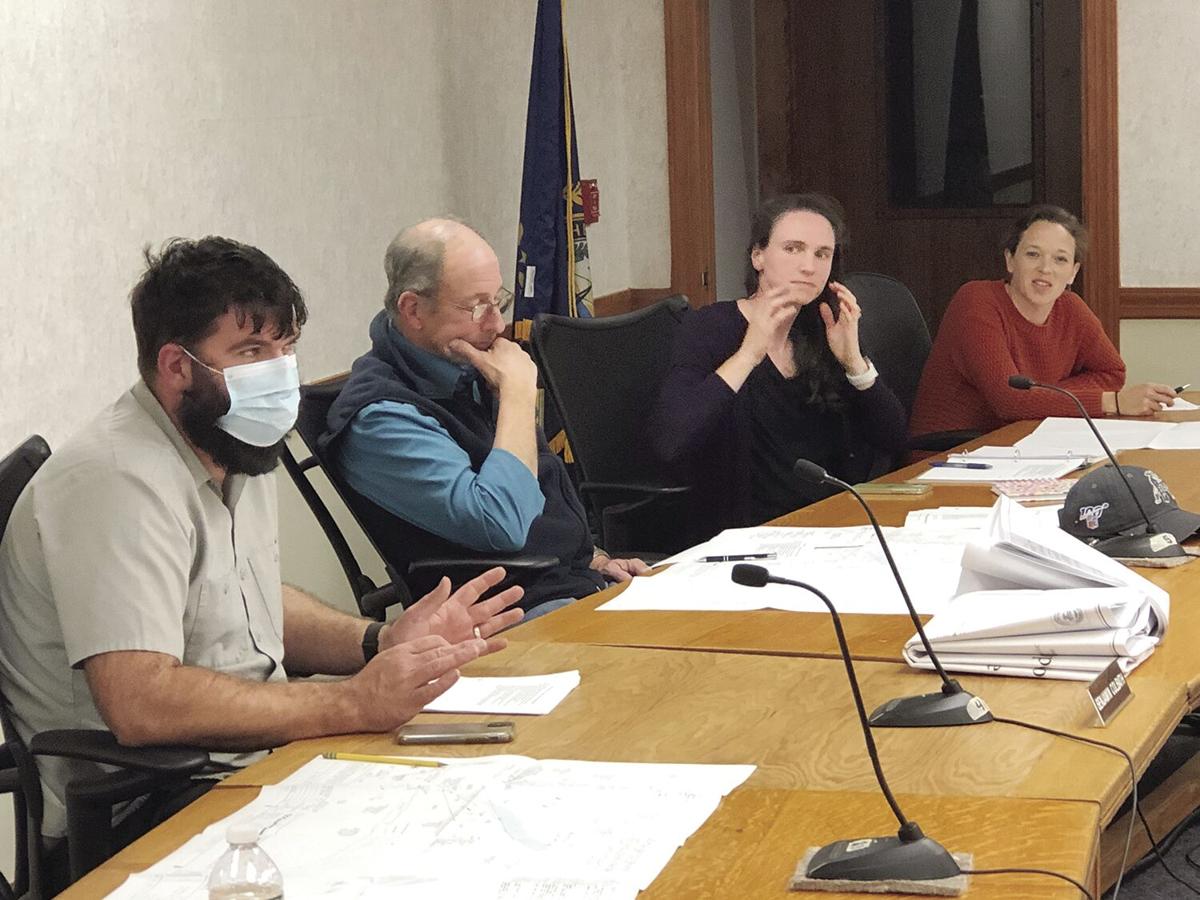 Project engineer Josh McAllister (foreground) of HEB Engineers speaks at the Conway Planning Board about the Redstone Group project planned for Technology Lane in Conway. Also in the audience (behind McAllister) is MWV Chamber of Commerce Executive Director Janice Crawford. (TOM EASTMAN PHOTO)

The Redstone Group, LLC of North Conway received conditional approval from the Conway Planning Board Oct. 14 to build a 7,774-square-foot office building with associated infrastructure on Technology Lane in Conway. (HEB ENGINEERS)

CONWAY — The Conway Planning Board last week held a first reading of a proposal that would allow compact cluster housing developments by conditional use permits.

The board is trying to craft an article to appear on the town warrant in April.

They reached that after a back and forth on whether the town needs to attract working families or single workers in need of housing.

Porter said modular homes are a viable alternative for many when it comes to affordable housing, noting he himself lives in a mobile home park in Conway.

“To me, 300 square feet is not a whole lot to have, just a couch and a kitchenette (and bathroom),” said Porter. “The majority of people in this valley say they really don’t want to see that in this valley.”

Colbath responded, saying, “I understand, but we’re not trying to solve everything at once. So, instead, we do nothing?”

Board members ultimately agreed to increase the square footage to 600-1,200 square feet.

Speaking from the audience, Harrison Kanzler, executive director of the Mount Washington Valley Housing Coalition, said he had worked with previous member Earl Sires on his original proposal.

Colbath said the board would continue to work on the proposal, with planning assistant Holly Whitelaw reminding the board the town’s new planner, Jamel Martin Torres began work Oct. 17.

Sires, who moved out of Conway last winter, offered his proposal to the board last January. The proposed article as it now stands says:

“In order to encourage the development of affordable primary residences and enhance residential housing choices in Conway, the Planning Board may grant a conditional use permit for compact cluster housing developments under the following conditions:

• All dwelling units shall be in single-family detached structures or duplexes.

• All dwelling units shall be served by municipal water and sewerage.

• All dwelling units shall have a floor area of not less than 600 square feet nor greater than 1,200 square feet.

• All dwelling units shall be used for long-term residency and as primary residences; and short-term transient occupancy of any dwelling unit is prohibited.

• The minimum lot size shall be 1/4-acre for the first unit and 5,000 square feet for each additional dwelling unit on a lot.

• The minimum frontage for any lot shall be 50 feet.

In other action, the board gave unanimous conditional approval to the Redstone Group LLC of North Conway to build a 7,774-square-foot office building on Technology Lane in Conway.

There was little discussion and few questions asked of project engineer Josh McAllister of HEB Engineers of North Conway.

McAllister, who has worked on projects located at the MWV Technology Village’s campus going back 14 years, said the project was approved for a special exception by the Conway Zoning Board of Adjustment July 21.

He said that projects in the business development park on Technology Village first require special exceptions before they can come before the planning board for full site-plan review.

He said a local resident is affiliated with the Redstone Group LLC and that he plans to rent two offices at the site.

In July, Jac Cuddy, executive director of the MWV Economic Council, told the Conway Daily Sun that the council had recently sold Lot 4 to the Redstone Group.

He said the buyers also had a purchase-and-sale agreement to acquire the adjacent Lot 3. He said Lot 3 and 4 are both about 2.5 acres.

According to McAllister, the Redstone Group is a land investment real estate holding company with at least one local principal but he declined to provide further details.

According to tax records at Conway Town Hall, the group’s mailing address is 138 Nickelback Road, Conway.

The board also had a first reading of a proposed planning board bylaw that would allow an alternate to be invited to sit on the board for discussion and ask questions even if he or she was not sitting on the board and voting at that session; he or she would also be allowed to speak from the floor.

It would allow someone to stay on throughout a project’s review even if they were not voting.

“Originally, a non-voting alternate could ask questions from the floor if they were not sitting on the board but they could not participate with the board in discussions,” said Porter.

A second reading of the policy is set for the board’s next meeting Oct. 28.