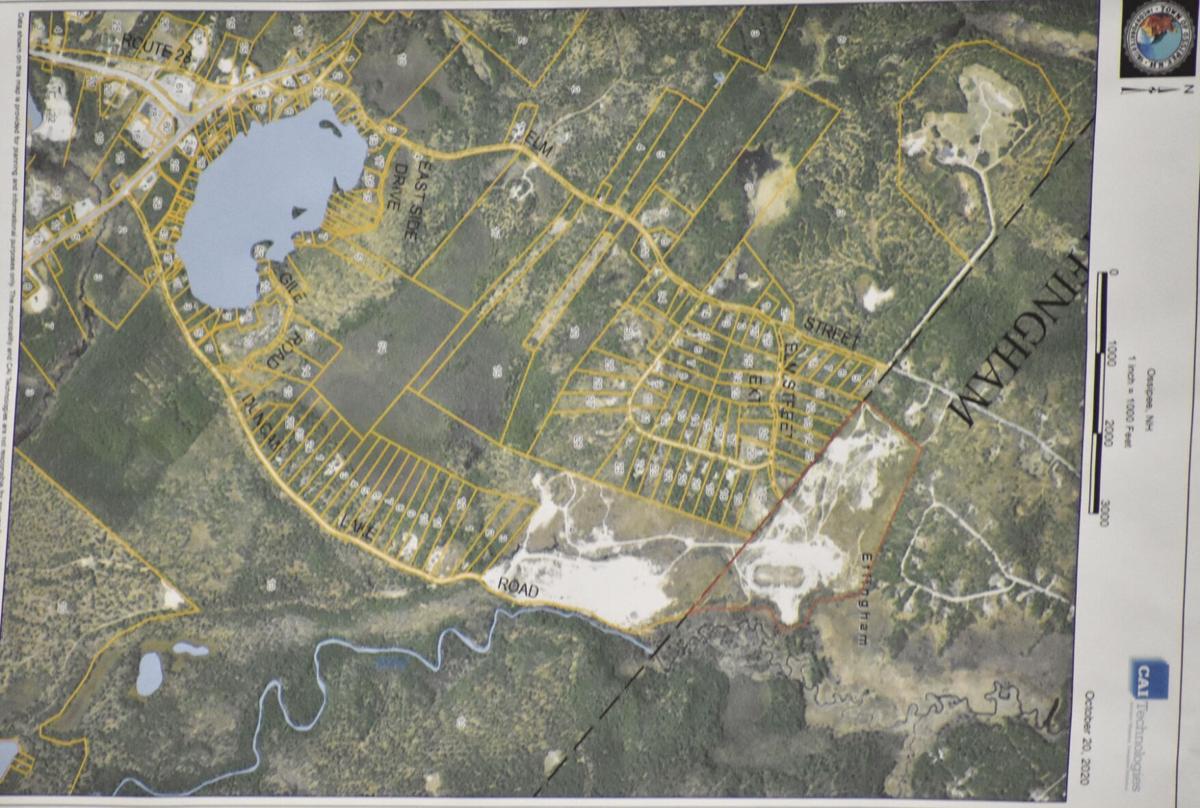 Duncan Lake Road residents are concerned that trucks from a gravel pit in Effingham will spread dust and cause other hazards for them. (DAYMOND STEER PHOTO) 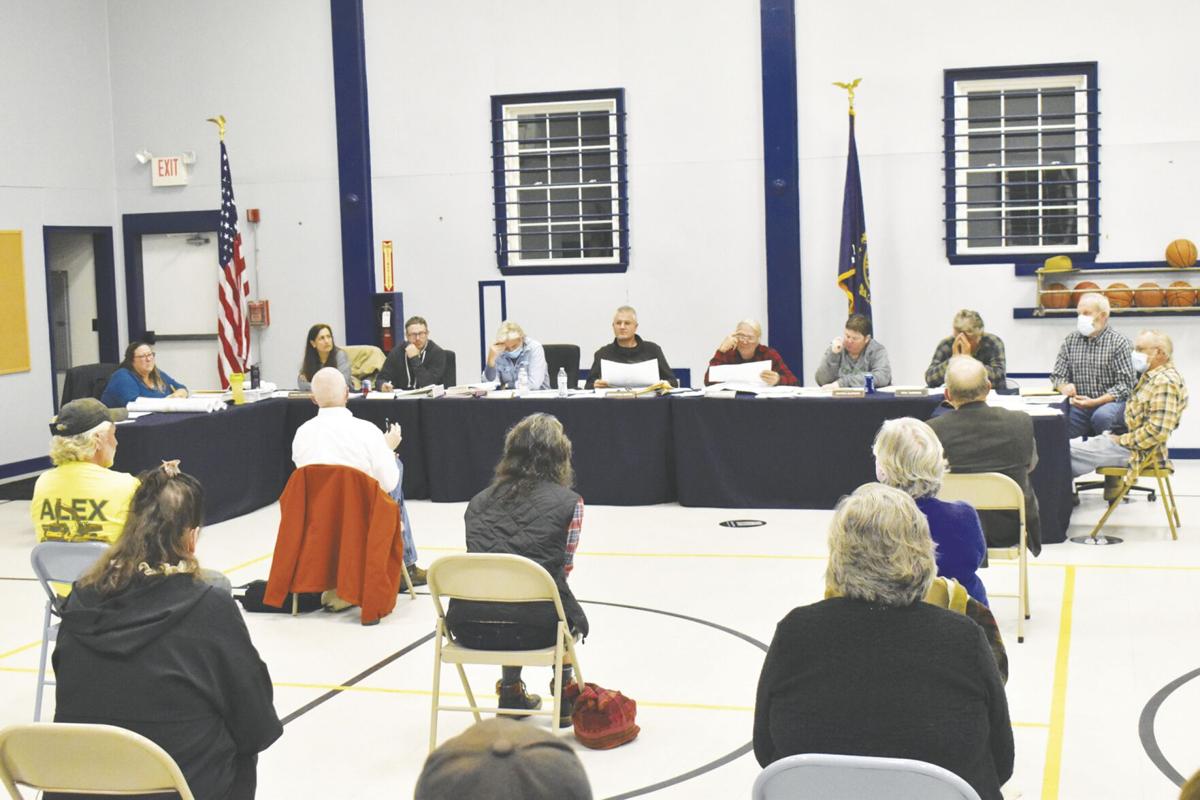 Duncan Lake Road residents are concerned that trucks from a gravel pit in Effingham will spread dust and cause other hazards for them. (DAYMOND STEER PHOTO)

OSSIPEE — About two dozen Ossipee residents Tuesday asked the planning board to prevent an Effingham gravel pit from using Duncan Lake Road for fears of dust, and traffic and one woman said truck rumbling would damage her house.

William Angelini Jr. of Groveland, Mass., is seeking approvals from Effingham to excavate the so-called Angelini Borrow Pit located at the Effingham end of Duncan Lake Road, which runs to Route 16 in Ossipee slightly south of the Route 28 Route 16 intersection.

The reason the Ossipee Planning Board was discussing the project is because state law says when the sole access to a property under consideration is located in another municipality, that other municipality has the right to review it, said Jim Rines of White Mountain Survey & Engineering of Ossipee who represented Angelini.

Sixty-eight acres of the 87.7 acre property is “available for extraction,” according to Rines, as reported in the Aug. 13 Effingham Planning Board minutes.

Rines said the pit is expected to generate 40 trips per day, counting both inbound and outbound trucks, and a maximum of about 60 trips per day. Angelini can’t use Elm Street Extension for moving gravel because it’s a private road, and he has no right to it.

There is a neighboring gravel pit owned by Green Oak Reality Development at 125 Duncan Lake Road.

Residents dread the idea of having twice as much truck traffic going by.

“Something's got to give," Duncan Lake Association President Gordon Pilotte said. “Just because we have truck truck traffic doesn't mean we have to deal with double truck traffic.”

He added that Duncan Lake Road residents and others in that general area will likely file for tax abatements if the project is given the green light.

Duncan Lake Road resident Jeannie Zwoboda raised concerns about how the already dusty conditions on the road would be made worse by this project.

“I'm so close to the road that I can see great clouds of dust coming through,” said Zwoboda. “I can't breathe sometimes. And breathing is important to me.”

Zwoboda said the trucks that go by already shake her house, and that’s not good for its structure.

Rines said that Ossipee selectmen have calculated that the additional road maintenance that the project would cause would cost the town $9,000 per year. Rines said Angelini is willing to pay some of the cost so long as its split with the Green Oaks pit.

Angelini himself confirmed what Rines said.

"I'm not the only one using it," said Angelini, adding he was seeking a "happy medium" when it comes to sharing road costs.

Angelini said it's been a particularly "dusty summer" and that cars have been contributing to the dust issue as well.

Jim Eastham of Duncan Lake Road agreed with Pilotte by saying he would file for an abatement too if the project passes.

He said the trucks are speeding over the 25 mph speed limit and their banging around wakes him up in the morning. He said if the project passes he will be subjected to 10 trucks per hour 10 hours per day. The road is already littered with potholes.

Eastham wondered where his tax money is going because the town can’t seem to remove the potholes from the road.

“So please, this is not a joke for us,” said Eastham. “That house on that road is my retirement money, they're going to put me in a nursing home if I ever sell it, and you're going to cut the value of it by a third, just because of truck traffic? No thanks.”

Selectmen’s representative to the planning board Jonathan Smith said the reason the road got in such poor shape this year is the town’s grader conked out and the town was without one for several months. The town has a loaner now.

He said the road maintenance will be greatly improved when the new one arrives.

Ossipee residents aren’t the only challenge that Angelini and Rines face.

There is another gravel pit at 125 Duncan Lake Road in Ossipee owned by Green Oak Reality Development. Trucks from Angelini’s pit would have to travel over an access road controlled by the Green Oaks, which objected to Angelini’s proposal to use that access road to haul gravel.

“Green Oaks asserts that they don’t have the right to use that right of way for this particular application — that may play out in court on a later date,” said Sullivan, adding he was also concerned for the residents of Duncan Lake Road as the number of heavy trucks would double.

“They walk there, they have horseback riding, kids ride bicycles there, it’s a significant impact.”

But Rines said that there’s nothing in the right of way language that specifically prohibits the access road from being used for hauling gravel. He also said that whether the project should be approved depends on whether Duncan Lake Road is capable of supporting the additional truck traffic.

“The traffic impact study will determine how many trips there are, and then that will trigger what that road width needs to be,” said Rines.

Ultimately, the planning board voted to table continue the discussion to Nov. 17 so they could do legal research into their options as to what conditions they could impose on the project.