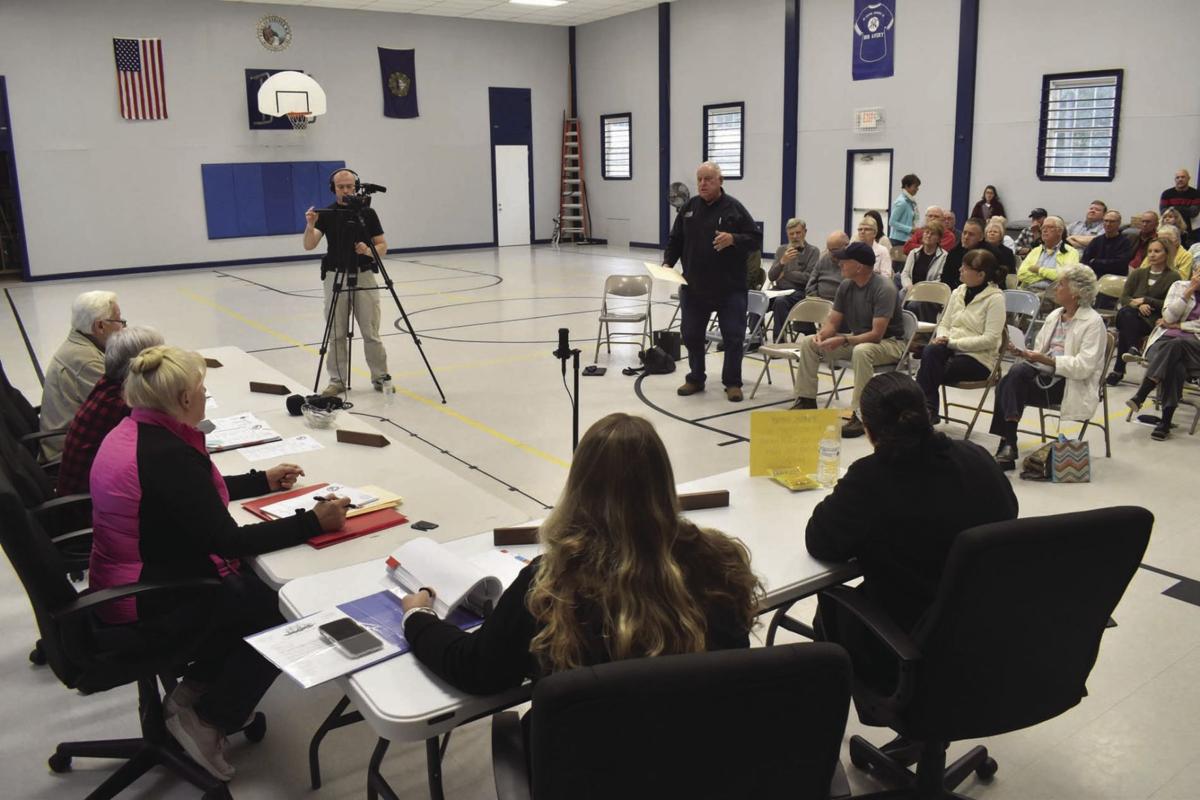 Over 50 people, including Donald Meader (standing in the audience) came to the Ossipee selectmen's meeting Sept. 30 to complain about a contractor's assessing work. (DAYMOND STEER PHOTO) 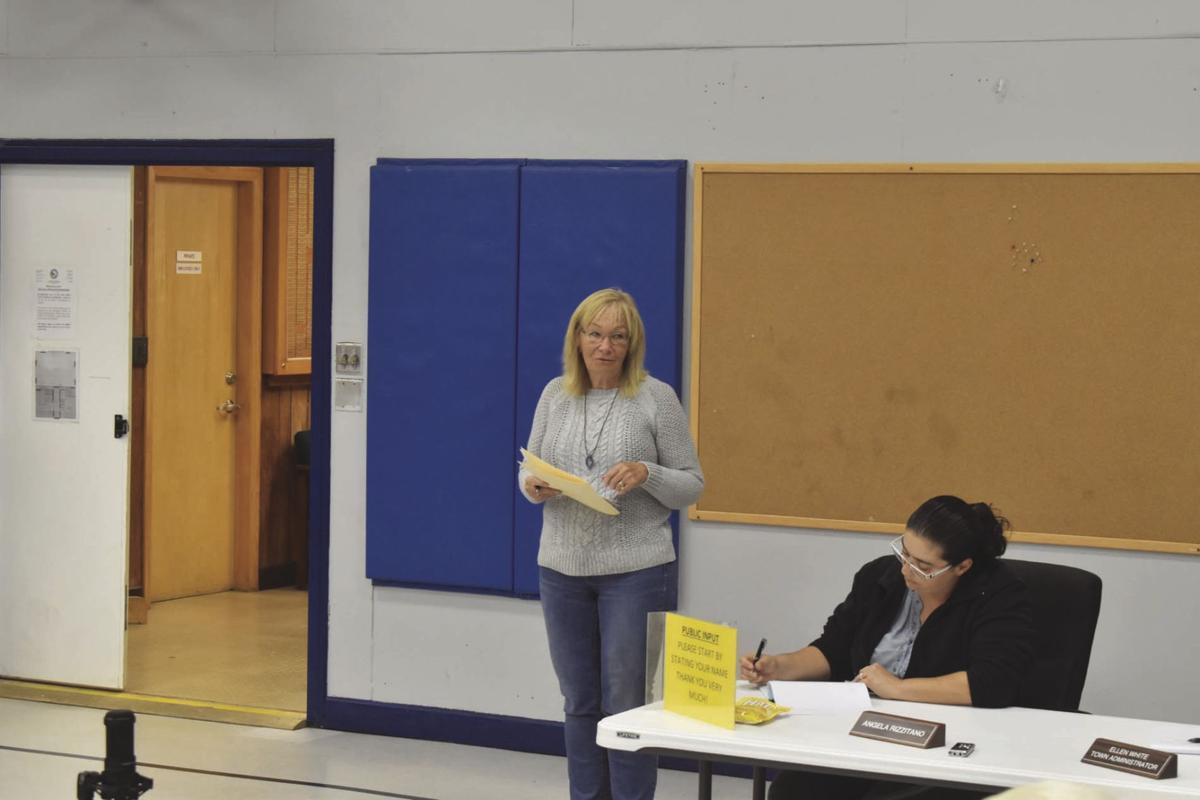 Paula Moore, president of Windsock Village, told Ossipee selectmen Monday that residents of her community are "troubled and concerned" by the assessed values on their properties. (DAYMOND STEER PHOTO)

Over 50 people, including Donald Meader (standing in the audience) came to the Ossipee selectmen's meeting Sept. 30 to complain about a contractor's assessing work. (DAYMOND STEER PHOTO)

Paula Moore, president of Windsock Village, told Ossipee selectmen Monday that residents of her community are "troubled and concerned" by the assessed values on their properties. (DAYMOND STEER PHOTO)

OSSIPEE — Approximately 50 Ossipee residents on Monday demanded to know why a contracted assessor said their property values have increased by as much as as 100 percent.

Selectmen vowed to provide answers at their next meeting.

Ossipee is doing a townwide revaluation.

Soaring Heights and Windsock Villages Residents fear their tax bills will go up dramatically or disproportionately with other areas of town based on the preliminary assessments that they have been given in September.

Windsock Village and Soaring Heights are private aviation communities in West Ossipee that share a 4,000-foot turf runway (NH69) between the two developments, with Windsock containing approximately 115 homes and Soaring Heights having about 27 homes.

Residents came to question assessments made by the town-contracted Granite Hill Municipal Services of Concord. They also questioned the professionalism of the company’s workers.

During public input, Donald Meader said he’s an owner of a restaurant in town (Pizza Barn) and also owns properties at Windsock Village.

He said the 2018 equalized ratio for Ossipee meant that based on sales data, properties were under assessed by about 15 percent.

“In what I have reviewed and looked at, I have not seen that the sales justify that.”

The assessment issue was also on Monday’s agenda.

First to speak was Paula Moore, of Windsock Village. She said residents are “extremely troubled and concerned about the assessed values of their properties.”

Moore, a real estate broker, said the values are inconsistent with market values. She provided the information to the selectmen.

The Sun reached out to Granite Hill over Facebook and received the following statement Tuesday: “The property values in Ossipee are not finalized yet. I find it hard to dispute what doesn’t exist yet. Those property owners should follow the statutory appeal process under RSA 76:16 when they get their tax bill in November if they believe they are aggrieved.”

Linda Hatfield, president of Soaring Heights, said Granite Hill pointed to the “uniqueness” of the community.

“What we find when we look at the market value is it’s unique because it’s difficult to find buyers in the market where we live,” said Hatfield, adding that things like the fact they have to pay for their own snow removal and covenants and restrictions, don’t seem to be getting factored into the assessments.

Hatfield said the assessor told them that assessments in the town went up by 22 percent on average. However, in Soaring Heights and Windsock went up 38 percent and land values were up 86 percent.

Bob Pustell of Windsock Village said the reason why it’s tough to find buyers is because relatively few people want to live in an aviation community versus on a lake or by a ski mountain.

“When you are selling a unique property like Windsock or Soaring Heights, if you want to get that wonderful price, you need to be on the market a long time or be extremely lucky to have that buyer come along right away,” said Pustell, who said he is an aviation enthusiast with desire and the money to purchase in the community.

Stephen Ciavola of Windsock said the value of his property has supposedly increased nearly $70,000 in the past two years. He said the assessment on his property increased from $194,000 to $260,000.

“I don’t have marble countertops, I don’t have hardwood floors,” he said. “How is it possible to reach these numbers?”

Later in the meeting, Ciavola described how increases like this might force his family out. He is a former detective from the Lowell, Mass. police department. He came to New Hampshire about four years ago after his wife suffered a serious brain injury, and he found Windsock to be a safe place to raise his 2-year-old daughter. While in Lowell, he had to worry about drive-by shootings and carjackings.

Before purchasing, he did due diligence and determined he could afford to live there.

Greg Howard of Windsock Village said he’s been unable to schedule an appointment with the assessors because of his work schedule. Howard has been emailing back and forth with the assessors trying to get information about the draft assessments. He added that the town has a deadline with the the state in the middle of this month.

“It needs to be impressed upon the assessors that they need to come up with some type of satisfactory resolution for this so that the town is not put in a bind going into this fiscal year,” said Howard.

White told the Sun that the town has until Oct. 14 to submit the Summary Inventory of Valuation (Form MS-1) to the New Hampshire Department of Revenue Administration.

Residents had the opportunity to meet with the assessors last week to review their property information.

Some residents said representatives of Granite Hill were rude or that they didn’t allow time to explain their situation even after their meeting started late.

“We didn’t even get to address our four issues,” said Nancy Wogman. “Part of which was our property has increased 100 percent from the previous assessment, and I do not understand that.”

One man asked what would happen to residents if they can’t make an appointment with the assessor.

Town Administrator Ellen White said the numbers are being finalized. Property owners may file for an abatement after they receive their final tax bill, which normally comes out in December. White said Granite Hill has been the town’s contracted assessor for about seven years.

Selectman Sam Martin, in response to a questioner, said that she recommends people periodically check their tax cards for mistakes.

At the end of the meeting, Martin said the town, either the selectmen or the staff, would ask Granite Hill about the concerns residents presented and the selectmen would announce the results.

“I would like answers to some of the questions that I’ve heard,” said Martin.

The other selectmen, Martha Eldridge and Sue Simpson, agreed they also want answers.

“I would hope by the next meeting I can make a statement to some degree,” said Martin, adding selectmen meet next on Oct. 7.

White said the assessor normally has office hours at the Selectmen’s Office on Wednesdays from 9 a.m.-4:30 p.m., but there are some inspections scheduled this Wednesday (today) and the assessor isn’t expecteing him in until around 11 a.m.

The Assessing Clerk can schedule an appointment for property owners with him. She can be reached at (603) 539-4181.