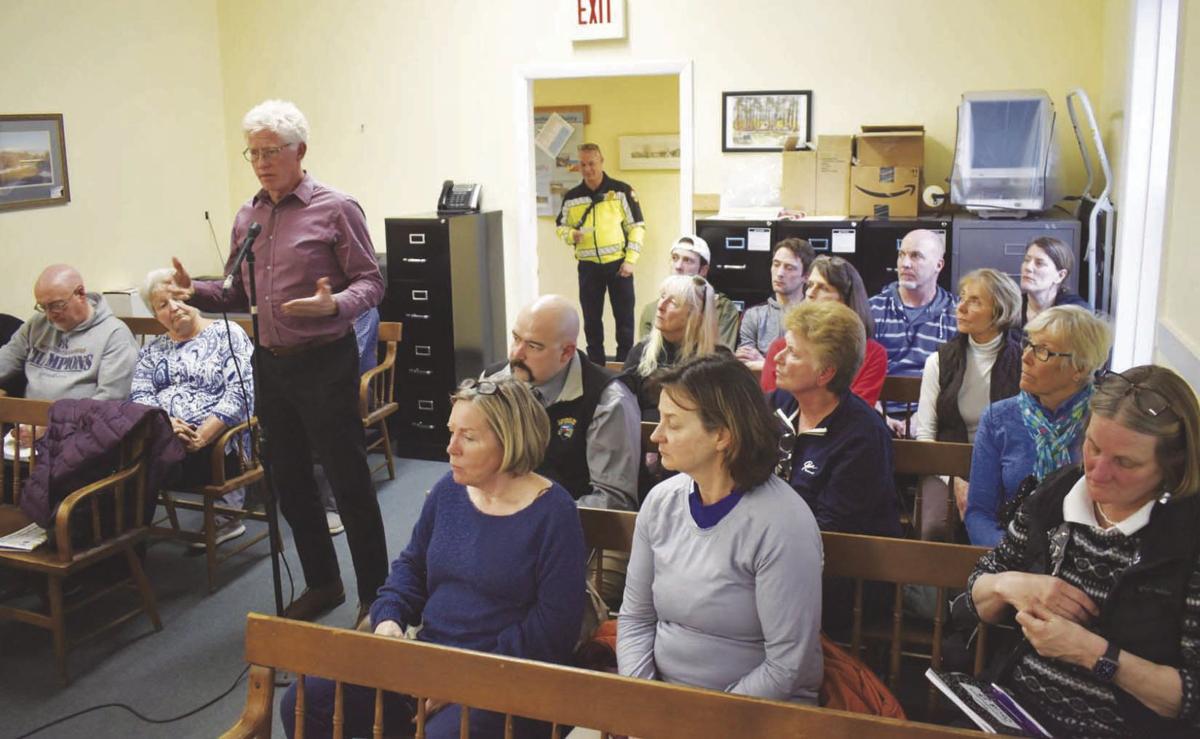 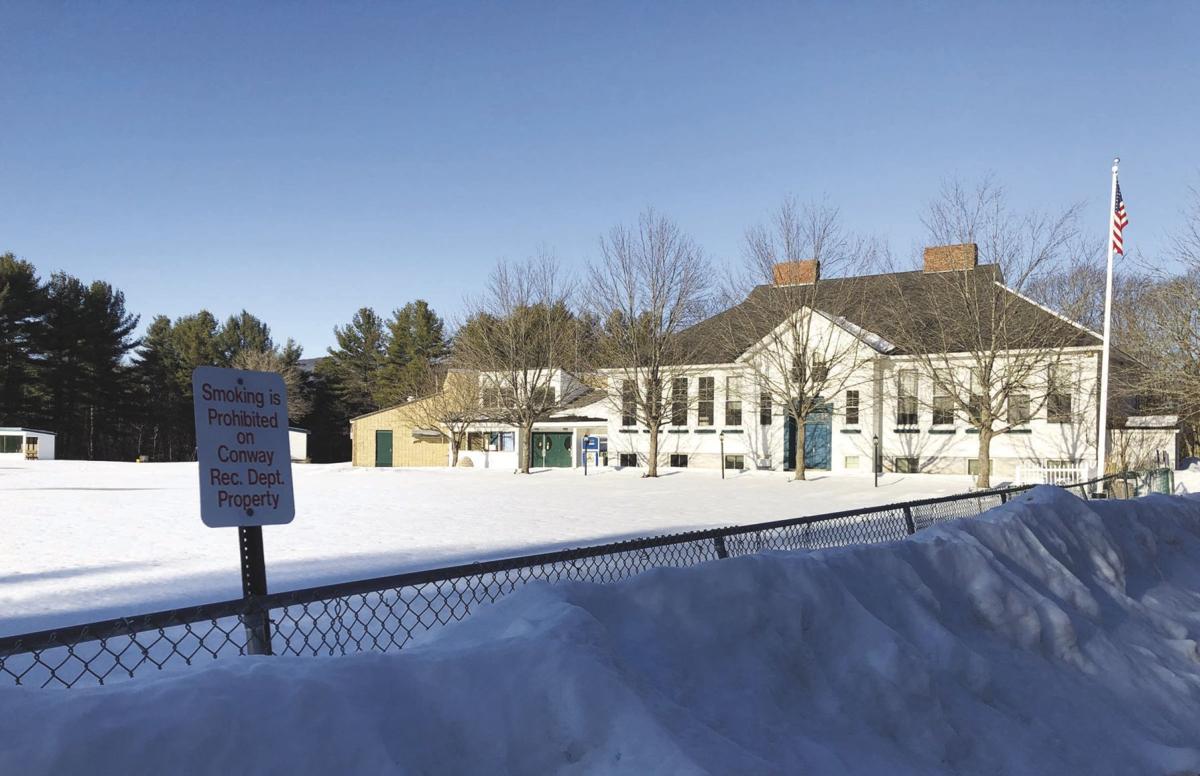 CONWAY — Selectmen gave a warm reception to an idea brought forward by a group of tennis enthusiasts to put the old Conway Community Building to use as indoor tennis courts through a public/private partnership. Other town officials, like Town Manager Tom Holmes and Recreation Director John Eastman, also gave the proposal a big thumbs up.

After Conway Parks and Rec moved to converted space at Kennett Middle School last year, selectmen decided to poll voters on selling the property. Article 30 on the April 14 ballot asks the town to give selectmen permission to sell the old recreation facility located at 1808 E. Main Street.

Since the article was written, several other factors have come into play.

First was New Hampshire Primary voting on Feb. 11. Traditionally, the old rec center had been the town polling place. But once the building was closed, voting was switched to Conway Elementary School. That did not prove popular as traffic in Conway Village backed up for miles, and people complained they never got to vote.

Then, at town deliberative session on March 4, resident Ray Leavitt stood up to say he will be mounting a protest over selling the community building. He said the property, which contains a ball field, is used by parents and children to play pickup games.

“I just think it’s a really valuable asset for us and just because we can develop the piece of property doesn’t mean we have to do that,” said Leavitt. “I will be lobbying really hard to see that (the article) gets defeated.”

Mark Hounsell moved to change the wording to say selectmen would have to come back to the town for approval of a sale to a particular buyer. But the motion failed. The article will be placed on the ballot as written.

However, Leavitt said, “I’m more than confident I can defeat this thing.”

Eastman said he was concerned that “if the Center Conway field goes away, we’ve now lost two fields that have been used actively. If we lose two fields, I’d hate to come back here in five years and say we need to buy a piece of property to put a ball field in.”

The association has about 50 members and two pros, Justin and Chris Chaffee, who coach and give lessons to members and the public, including children.

The association was formed last year with the closing of Cranmore Fitness, which housed indoor courts for years. The association cut a deal with Cranmore to use those courts this winter, but that arrangement is coming to an end soon as that facility will be turned into a hotel.

Guerringue said without the courts, the Mount Washington Valley would lose indoor tennis. His plan involves keeping the gym and tearing down the original school, where the courts would go in. He said selectmen have several reasons to support his proposal.

“Center Conway wins by having something recreational; the tennis community wins, of course; the town wins, having a polling place; and John Eastman wins,” said Guerringue. “I’m sure he’s not thrilled about losing another ball field.”

Later in the meeting, town manager Tom Holmes clarified that the existing gym in the community building would be too small to be a polling place for presidential elections but a space encompassing two tennis courts would have more than enough room.

Eastman said having a partnership with the association would offer a “good opportunity” to provide lessons to children. He also said the valley’s pickleball players could use another place to play.

He said managing the facility wouldn’t be a big deal. He also said several local sports organizations will be competing for fields.

Holmes told the Sun Wednesday that statute RSA 41:14-a indicates that the Conway Planning Board and Conservation Commission will have to make recommendations on Article 30.

Tonight (Thursday), the planning board will discuss the community building sale at their meeting starting at 7 p.m. at town hall. The conservation commission was to discuss it Wednesday after press deadline.

Money to build the new facility would be raised privately, and the association would run it as a membership-based club fall to spring, said Guerringue.

Then from May to September, the facility could be opened to the public because association members would have outdoor courts to use in the warmer months.

Earlier in the meeting she asked whether there could be a fitness center there as well, and Guerringue said that’s a possibility.

“I think this might be a workable situation on that piece of property,” said Selectman Carl Thibodeau. “But I think what we need is more detail.”

Selectman Steve Porter said the plan is deserving of consideration.

“I’ve always been an advocate of having plenty of fields for the kids to play ball,” said Porter, adding there has long been a community of tennis enthusiasts in the valley and that ball fields aren’t easy to come by.

About Davis Park, selectmen’s chairman David Weathers said enclosing them would mean there would be no room for floodwaters from the nearby Saco River.

He said if the association were to use the old rec center, there would need to be a discussion about costs.

“I do think that there would be a desire and a need for a certain number of people to have a tennis court, I don’t disagree with that at all,” said Weathers. “But really, it’s matter of what the voters see (as a need) and who is going to be responsible for it.”

Selectman John Colbath asked what would happen if residents vote to sell the property. He asked if the association could buy it for a reasonable price and rent it back to the town.

“Is it going to cost $1?” asked Guerrigue, adding in all seriousness that it would be worth more than that if put on the market.

Later on, Guerringue said the United States Tennis Association has given the North Conway group funding to provide lessons to children and the USTA could possibly give tens of thousands toward a capital campaign to construct the building.

Colbath said, “I’ve seen the Chafee brothers in action at Cranmore, working with young players. And we need more of that.” That comment got a round of applause.

“If it’s going to benefit us in the town and benefit the people of the town, I’m willing to cut a deal,” said Colbath. “I really am.”

Seavey said she was “super in favor” of the tennis facility idea, but voting down Article 30 needs to be dealt with first. However, Thibodeau noted that Article 30 only grants selectmen permission to sell the property but doesn’t require them to do so.

Weathers encouraged the tennis enthusiasts to return after the town vote. “If you want to sharpen your pencil, wait and see what the results of the vote is on the 14th, and then we’ll go from there,” said Weathers. “Hopefully, we get some solid direction from the voters on what they’d like to do with the property.”