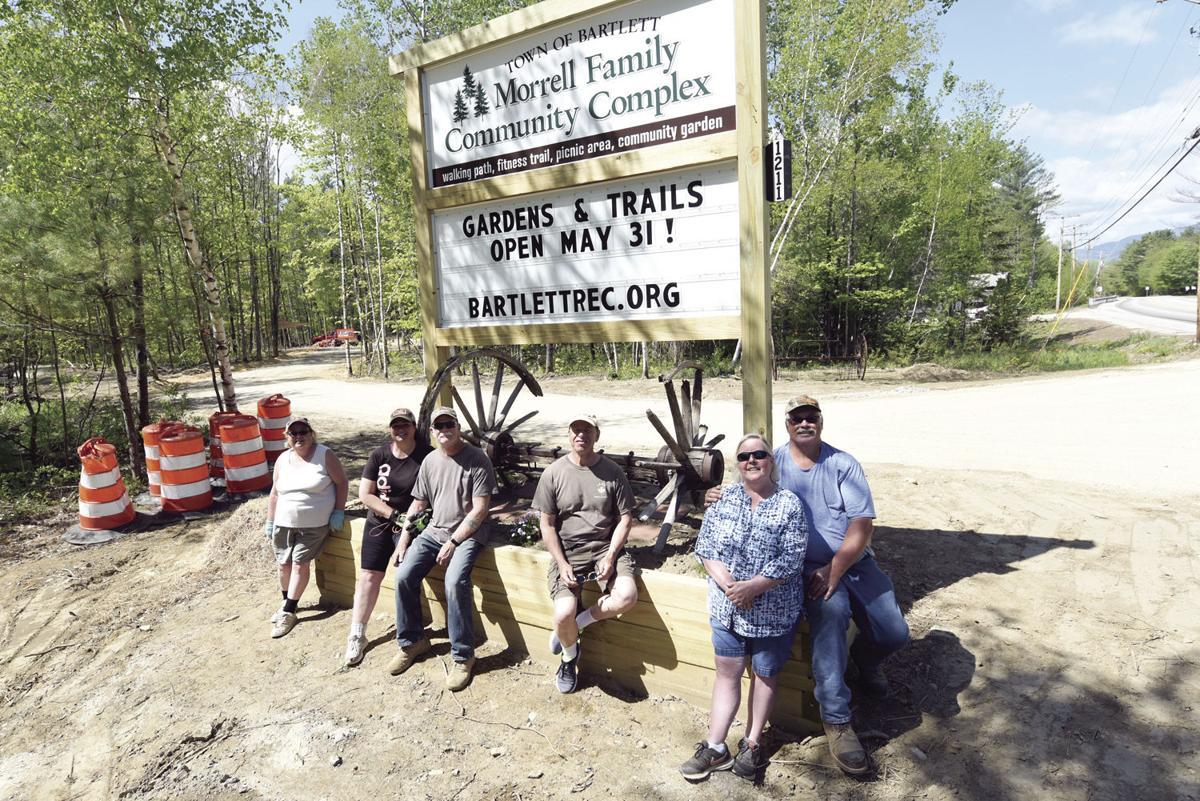 Some of the crew who have been working on the Morrell Family Community Complex in Bartlett are (from left) Corinne Briggs, Angela Huertas, Ron Lanigan, Steve Hempel, and Annette and Steven Libby. (JAMIE GEMMITI PHOTO) 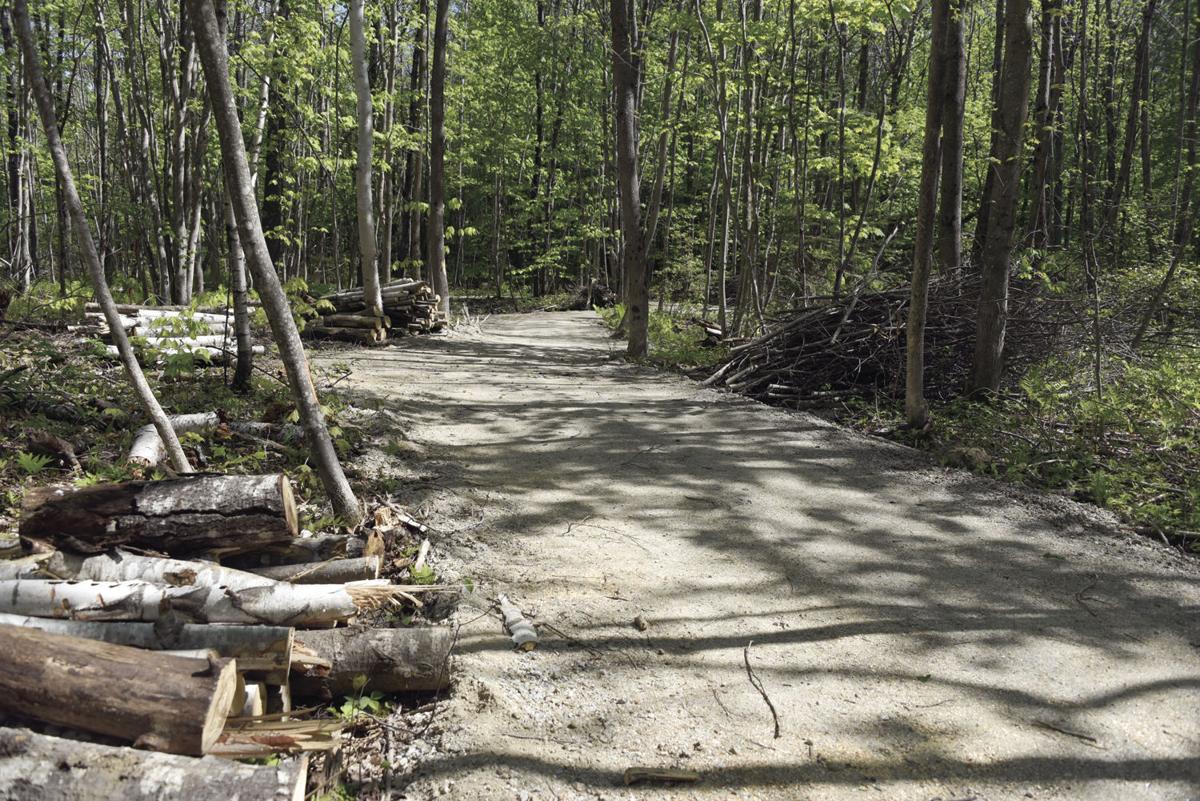 Walking is stable and firm on the paths that are paved with hard-packed crushed gravel and bridges sturdy enough for a vehicle at the Morrell Family Community Complex in Bartlett. (JAMIE GEMMITI PHOTO) 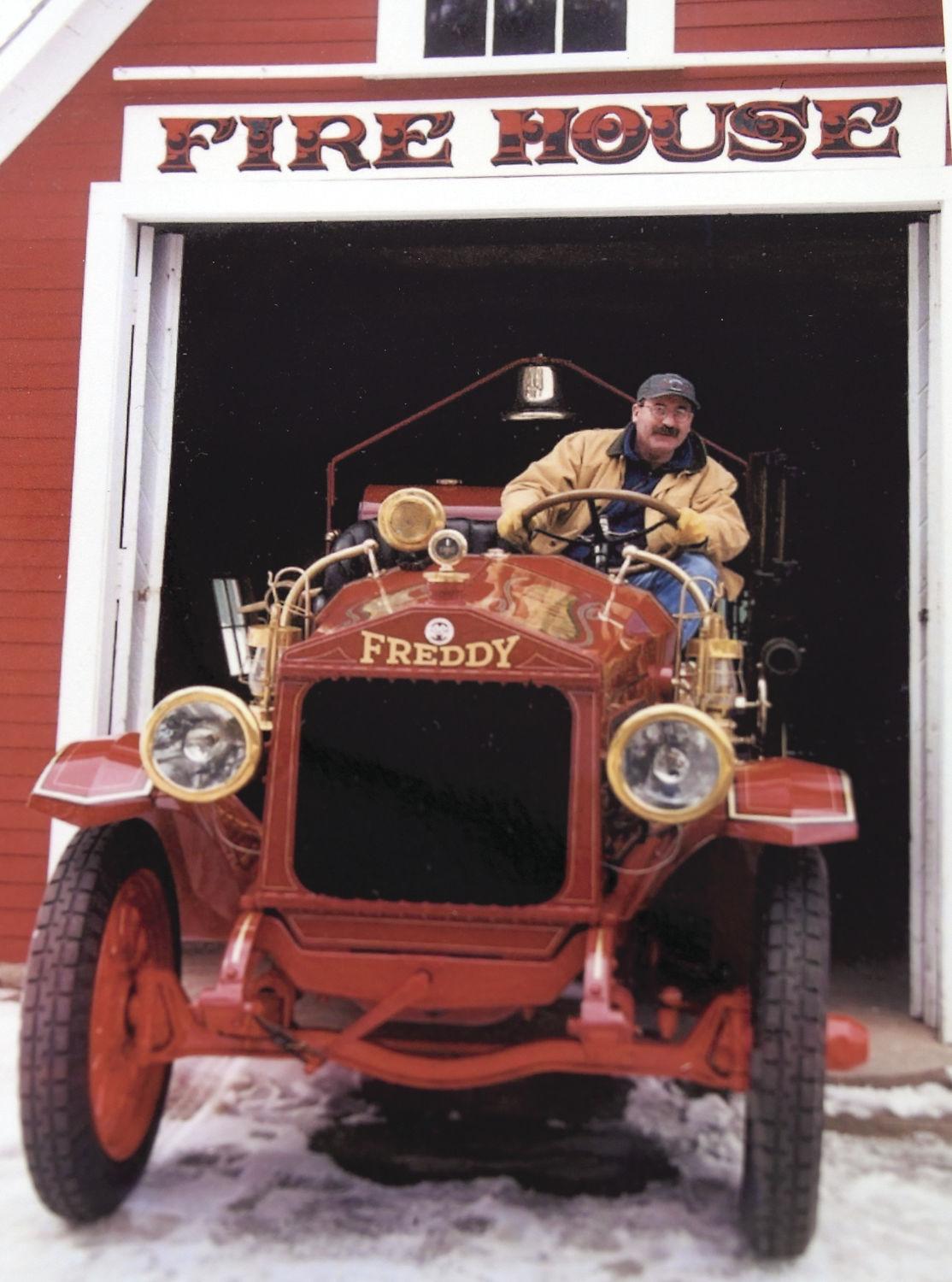 Stoney Morrell (1956-2006) acquired the land that his family gifted to the town for the complex. Morrell was president of Story Land in Glen. (COURTESY PHOTO) 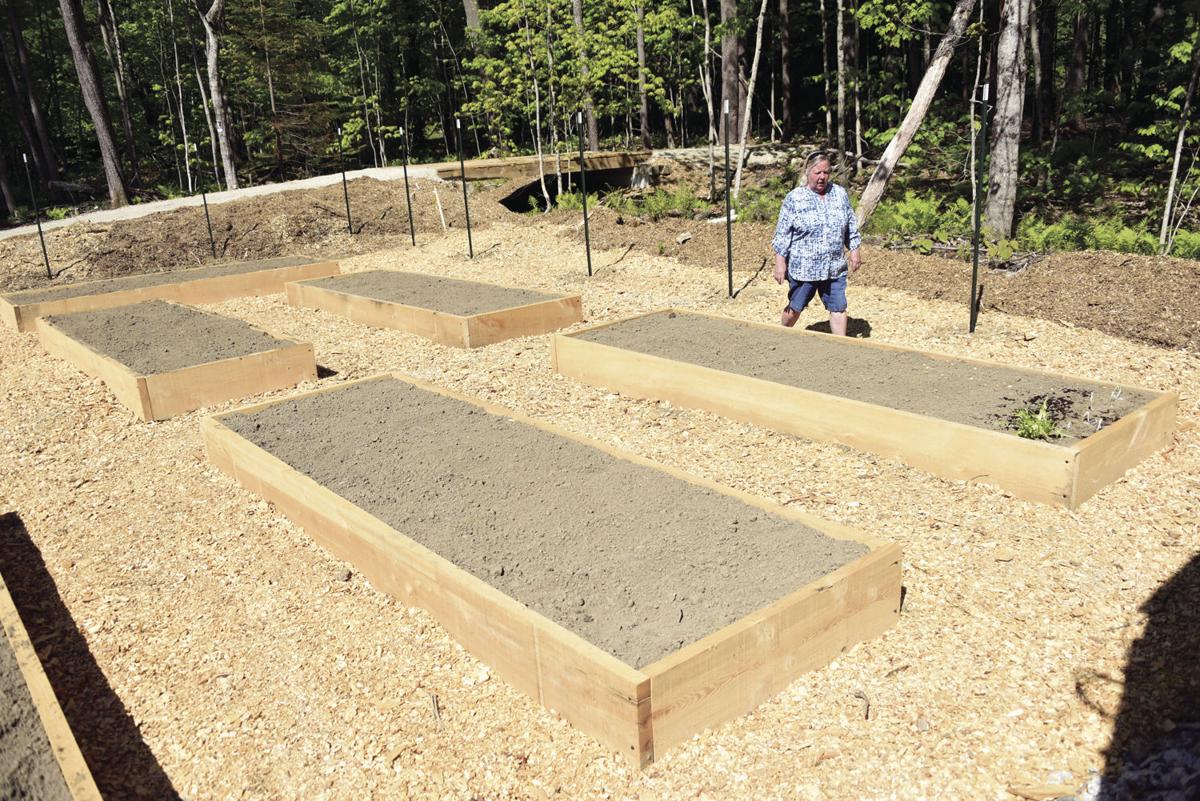 Annette Libby shows the height of the foot tall garden beds at the Morrell Family Community Complex in Bartlett. There are also 2- and 3-foot beds. (JAMIE GEMMITI PHOTO) 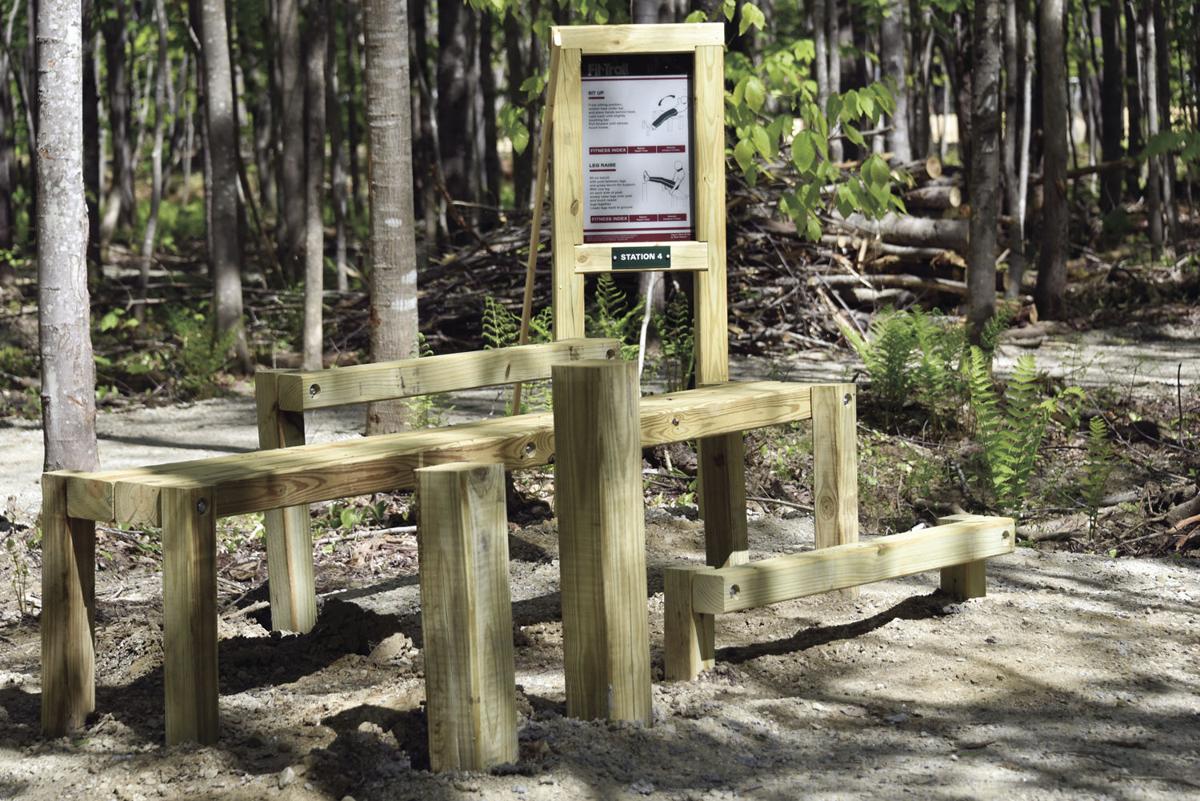 Fitness station 4 includes sit-up and leg-raise equipment on the Morrell Family Community Complex trails pictured Tuesday. In all, there are 10 fitness stations on the trails. (JAMIE GEMMITI PHOTO)

Some of the crew who have been working on the Morrell Family Community Complex in Bartlett are (from left) Corinne Briggs, Angela Huertas, Ron Lanigan, Steve Hempel, and Annette and Steven Libby. (JAMIE GEMMITI PHOTO)

Walking is stable and firm on the paths that are paved with hard-packed crushed gravel and bridges sturdy enough for a vehicle at the Morrell Family Community Complex in Bartlett. (JAMIE GEMMITI PHOTO)

Stoney Morrell (1956-2006) acquired the land that his family gifted to the town for the complex. Morrell was president of Story Land in Glen. (COURTESY PHOTO)

Annette Libby shows the height of the foot tall garden beds at the Morrell Family Community Complex in Bartlett. There are also 2- and 3-foot beds. (JAMIE GEMMITI PHOTO)

Fitness station 4 includes sit-up and leg-raise equipment on the Morrell Family Community Complex trails pictured Tuesday. In all, there are 10 fitness stations on the trails. (JAMIE GEMMITI PHOTO)

Those were values that the late president of Story Land, Stoney Morrell, held dear.

But his legacy lives on at the Morrell Family Community Complex, the first phase of which will officially be opened on Sunday, May 31, at 9 a.m.

“We’re hoping to have a short ceremony Sunday morning, but with a very long ribbon to allow for safe social distancing,” said Annette Libby, director of the non-profit Bartlett Athletic and Recreation Association, which is inviting Bartlett officials and volunteers to help celebrate at the parcel just south of Bartlett Village.

The 22-acre complex is comprised of two lots — the former Schultze property to the east and the former Nickerson parcel — that were purchased in the early 2000s by Morrell (1956-2006), whose parents, Bob and Ruth Morrell, founded Glen’s Story Land theme park in 1954.

The land, managed by BARA, “is public land, open to everyone, residents and non-residents alike,” said Libby.

Reached for comment, Gene Chandler, Bartlett selectmen’s chair, said: “I think Annette and husband Steve have done a great job organizing it and getting all the volunteers to work on this. They deserve a big pat on the back.

“I hope it is used and that people take advantage of it. It’s pretty exciting. It’s a job well done — or almost well-done, as they are quite yet not finished.”

The complex features raised community garden beds, wooden pedestrian bridges over slow-moving streams, picnic tables, a tent-roofed pavilion, a fitness trail and nature trail. There are solar panels on the roof of the garden shed to power watering pumps for the gardens. The trails will be used for snowshoeing and ungroomed cross-country skiing in winter.

They are all components of Phase One, which that Stoney Morrell undoubtedly would have celebrated as good community uses for the property.

The next phase will consist of clearing land for a multipurpose recreational field for soccer, football and other sports; a softball field; and a Little League field, which Libby said will probably happen in a few years.

“I think it is a great, safe place that people of any age will be able to go to and enjoy a walk and get some physical activity in a natural setting without having to walk up and down the road (Route 302),” she said.

In addition, “you can go and garden and take a little walk with your family, with a ‘Carry-in, Carry-out’ policy for trash and for people to pick up after their pets. I am really looking forward to seeing people get out and use it,” said Libby.

The gardens and pathways, as well as the pavilion and grill and one of the two picnic tables, are all Americans with Disabilities Act-compliant, she said.

“We wanted to make it so people of all abilities could use it,” said Libby, noting that while there are slight rises on some sections of the trails, “people in wheelchairs will be able to handle that.”

Stoney Morrell logged with horses, and Marshall thought it was fitting to have Battles and Rex on hand.

It didn’t take long for Rex to kick into action, hauling a 12-foot log out of the woods to where the attendees gathered.

At the groundbreaking last July, Nancy Morrell donated $1,000 to help spur on giving from the community — that upped the then-fundraising total to $67,000. Since then, it has increased over the past year to $150,000.

Fundraising has been ongoing since fall 2011.

“That’s a lot of bake sales and cupcake sales. This has all been fundraising, with no taxpayer money,” said Libby this week.

She said that Phase One consists of about 7 acres and includes a three-quarter-mile, 10-station fitness and nature trail on the westernmost parcel, along with 25 raised community garden beds, which have been built at varying heights of 1, 2 and 3 feet off the ground.

“We’ve got 25 raised garden beds, which we have rented out at an annual fee of $35 to community members, mostly from Bartlett but a few from the whole valley as well, so far, but we probably have room for a total of 75,” Libby said.

“We’ve run out of wood to use for the beds, however; we will be getting a shipment of some more from White Mountain Lumber ... by the end of next week,” said Libby, noting that along with the garden plots is a tool shed that has everything that a gardener could need (rakes, shovels, hoes, hand tools).

Libby said the association is working with Gibson Center for Senior Services board member Dr. Marianne Jackson, who a year ago was recognized for her work to create a sustainable, age-friendly community in the valley, following the American Association of Retired Persons global model.

Gardening and fitness/walking trails are part of an age-friendly community under that AARP model, Jackson noted, saying the Bartlett complex ties into those goals seamlessly.

“I took a walk on the trails at the facility late last week, and I was very impressed,” said Jackson, a Madison resident and retired physician who is vice president of the Gibson Center.

“Annette Libby and the Bartlett Athletic and Recreation Association have done an extraordinary job of making this facility a place that is able to accommodate people of all ages and all mobilities,” said Jackson, noting that the facility could very well be a model for other communities to follow.

“You can replicate that, not only in our 10 other valley towns but nationally, and we will look to post that on our website. The joy of the AARP Age-Friendly model is that it can be shipped out anywhere and show how to learn from intergenerational models,” Jackson said.

Libby said she looks forward to working with the Josiah Bartlett Elementary school on nature education programs, including having students learn about a worm farm for the gardens.

“I need to speak with Principal Joe Yahna about whether they could take the worms and shelter them over the winter,” she said.

“Just haven’t had time yet as we have been busy getting everything finished, but it’s an example of how we will be hoping to be working with the school,” said Libby, who said gardening classes with the University of New Hampshire Cooperative Extension Service are also envisioned as well as possible programs with Tin Mountain Conservation Center of Jackson/Albany.

She said students in the Josiah Bartlett science class will be asked to come and identify tree, plant and flower species along the fitness trail, which will then be marked along the trail.

Three fir trees will be planted in Stoney Morrell and children Taber and Halie’s honor at the entrance by the sign, Libby said, to replace one that Morrell had planted 30 years ago on the original parcel that unfortunately was anonymously cut down this past winter by an unknown person possibly for use as a Christmas tree.

“The logo on the sign represents those three trees that were originally planted by Stoney to represent him and his two children,” she said.

“We decided to plant three new trees at the entrance to Phase 1 and to make our logo on the sign depict the three trees in their honor,” said Libby.

Contacted this week, Taber Morrell, now 32, said he and his sister, Halie, 30, a professor teaching forestry at College of the Atlantic in Bar Harbor, Maine, will not be able to attend Sunday’s ceremonies as they are sheltering in place.

But he was ecstatic to hear that the first phase is nearing completion, and said he and Halie will be there in spirit.

“This project involves so many of the aspects of life Dad loved, from helping to conserve the natural beauty of our area, to the fun of sports with friends and family, and above all our community in the Mount Washington Valley,” said Taber, who works for the Townsend Historical Society in Townsend, Mass.

“Having the opportunity to combine all of these in one place, that’s just about perfect! I know that somewhere, behind his mustache, Dad’s smiling from ear to ear,” Taber Morrell said.

Added friend Sut Marshall, who along with wife, Margaret, donated the nearly 400-acre Marshall Conservation Area off West Side Road in Conway in 2015: “This facility celebrates all of the things that Stoney loved. Family, the outdoors, sports, nature. It is a fitting tribute.”

Donations may be made to Morrell Family Community Complex, in care of Bartlett Athletic Recreation Association, P.O. Box 323, Bartlett NH 03812.