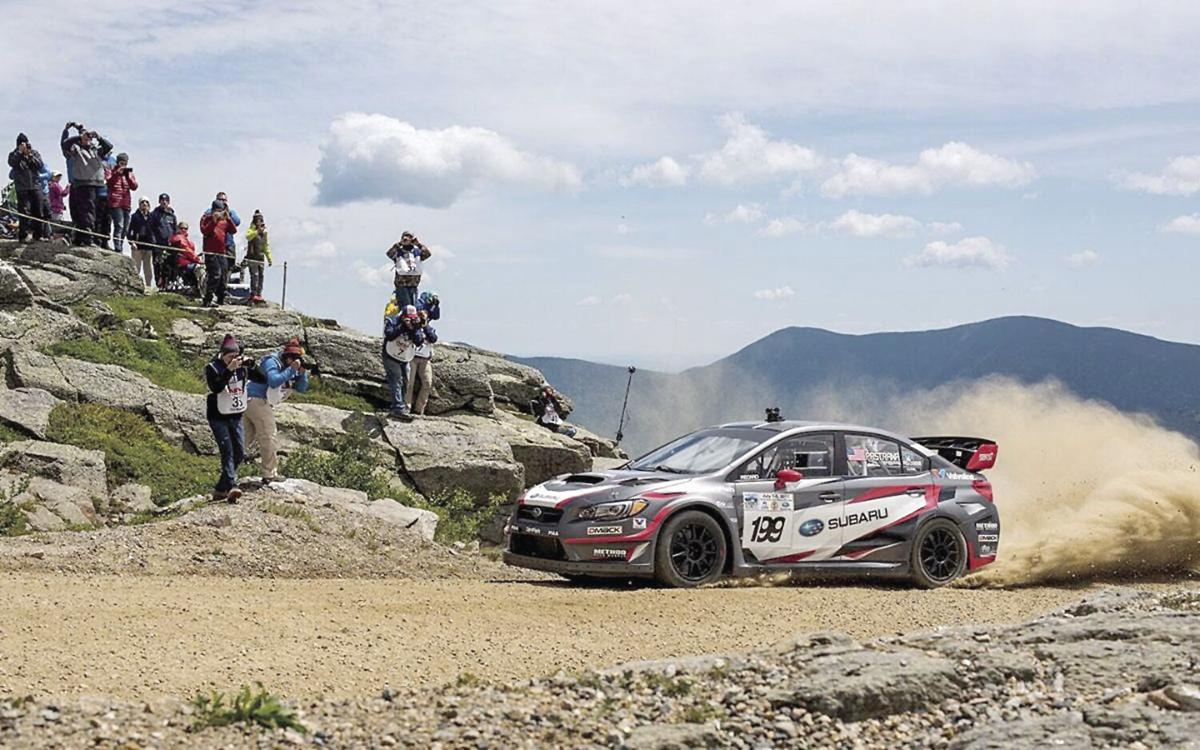 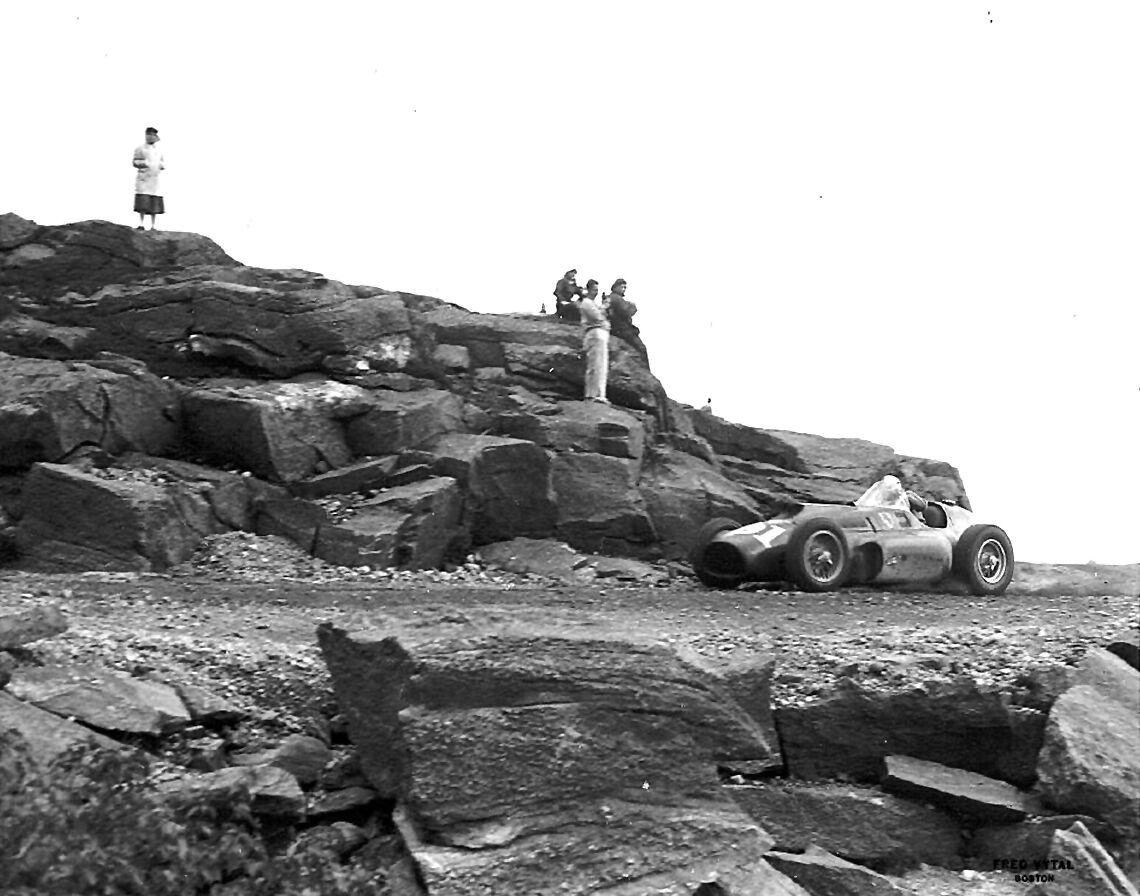 Since the first Mt. Washington Hillclimb was run in July 1904, many well-known drivers have competed and won the Climb to the Clouds such the legendary Carroll Shelby. Shown here rounding the famous Cragway Turn just above tree line, Shelby, driving a specially prepared Ferrari Grand Prix roadster, posted a record-setting time of 10:21.8 seconds on his way to victory in July 1957. (COURTESY PHOTO)

Since the first Mt. Washington Hillclimb was run in July 1904, many well-known drivers have competed and won the Climb to the Clouds such the legendary Carroll Shelby. Shown here rounding the famous Cragway Turn just above tree line, Shelby, driving a specially prepared Ferrari Grand Prix roadster, posted a record-setting time of 10:21.8 seconds on his way to victory in July 1957. (COURTESY PHOTO)

PINKHAM NOTCH — Speeding will once again be allowed, even encouraged this August when the 2021 Mt. Washington Hillclimb takes place on the famed Mt. Washington Auto Road on Aug. 13-15.

The Sports Car Club of New Hampshire announced Wednesday the event, originally scheduled for July 9-11, but moved back due to COVID-19 concerns, will take place a month later.

It was also announced that Subaru of America will return as the event's title sponsor and that Yokohama Tire will join the event for the first time as the Hillclimb's presenting sponsor.

“The Sports Car Club of New Hampshire is proud to welcome back Subaru of America as title sponsor of the 2021 Mt. Washington Hillclimb for the third consecutive event,” said Rob Widdick, president of the Sports Car Club of New Hampshire. “We’d also like to welcome Yokohama Tire to Mount Washington for the first time as the event’s presenting sponsor. Both Subaru and Yokohama Tire have a long history of success in motorsports across the globe.”

He added: "The Sports Car Club of New Hampshire would like to thank the Mt. Washington Auto Road for once again hosting this world-renowned Hillclimb as well as the hundreds of volunteers who are crucial to the success of the event. Lastly, with the pandemic nearly behind us, we'd like to thank everyone, including the many competitors, for their patience and understanding as we've navigated this unprecedented situation to reschedule this historic Hillclimb."

The 7.6 mile “Climb to the Clouds” is without question one of the ultimate proving grounds for both drivers and automobiles anywhere in the world. The serpentine tarmac and gravel road is lined with trees, rocks and dramatic drop-offs as it winds its way to the 6,288-foot summit of the Northeast’s tallest peak — Mount Washington.

“Subaru is once again thrilled to support the Mt. Washington Hillclimb in 2021,” said William Stokes, motorsports manager for Subaru of America. “The Mt. Washington Auto Road provides a challenge unlike any other, and the Sports Car Club of New Hampshire has done a great job in putting on the event. Subaru has been able to set new records every time the event has been run since 2011, so we’re looking forward to more fireworks in 2021!”

Set for Aug. 13-15, the Subaru Mt. Washington Hillclimb presented by Yokohama Tire will serve as a multi-day motorsports festival filled with a variety of activities for all ages including the Yokohama Tire Fan Zone, which will host antique vehicle displays, a variety of food and memorabilia vendors and an autograph session on Aug. 14.

The three-day weekend will be topped off with the return of the historic Subaru Mt. Washington Hillclimb presented by Yokohama Tire event which takes place Sunday, Aug. 15.

“It’s great to see the legendary 'Climb to the Clouds' return,” said Fardad Niknam, Yokohama Tire’s senior director of product planning & product marketing. “We’re thrilled to be the presenting sponsor of the 2021 Subaru Mt. Washington Hillclimb presented by Yokohama Tire and be involved with such a historic race. We look forward to working with the Mt. Washington Auto Road and the Sports Car Club of New Hampshire, as well as Subaru of America on this highly competitive, fan-favorite race. It will be a perfect venue to show the strength and versatility of our ADVAN tires.”

Race organizers from the Sports Car Club of New Hampshire are expecting a full 80-car competition field this year with some of the most talented competitors from across North America. They’ll be driving an array of equally impressive Hillclimb, time attack, road race and rally cars — all competing for “King of the Hill” honors in one of the most exciting events in all of motorsports.

“Since 1904, we’ve had a long history of car racing on Mount Washington,” said Tobey Reichert, general manager of the Mt. Washington Auto Road. “When the first ‘Climb to the Clouds’ was held, we took our place in racing history and became a proving ground for man and machine. We’ve continued with this great tradition off and on over the years and are thrilled to once again be getting ready for the Subaru Mt. Washington Hillclimb presented by Yokohama Tire in August 2021. We know that technology is changing year after year. Over the past several races we have seen an amazing skill-set behind these amazing machines. This summer we fully anticipate even more excitement and records to be broken.”

The course record was set in 2017 by the overall winner Travis Pastrana, who set a blistering fast record-setting time of 5 minutes, 44.72 seconds on the 7.6-mile tarmac and gravel course driving a 2017 Subaru WRX STI Hillclimb Special for Subaru Motorsports USA/Vermont SportsCar.

Additional information regarding volunteering, spectating and lodging for the 2021 Subaru Mt. Washington Hillclimb, presented by Yokohama Tire, can be found on the event’s official web site: mt-washington.com/climb-to-the-clouds.