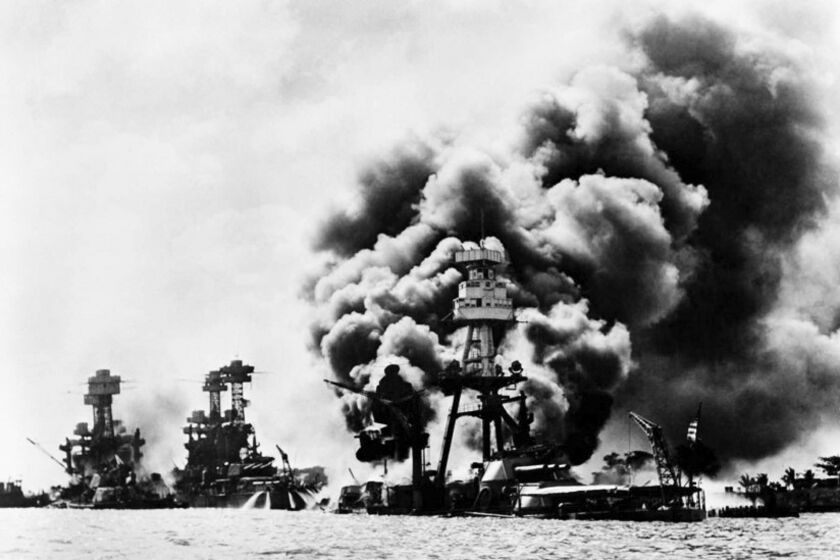 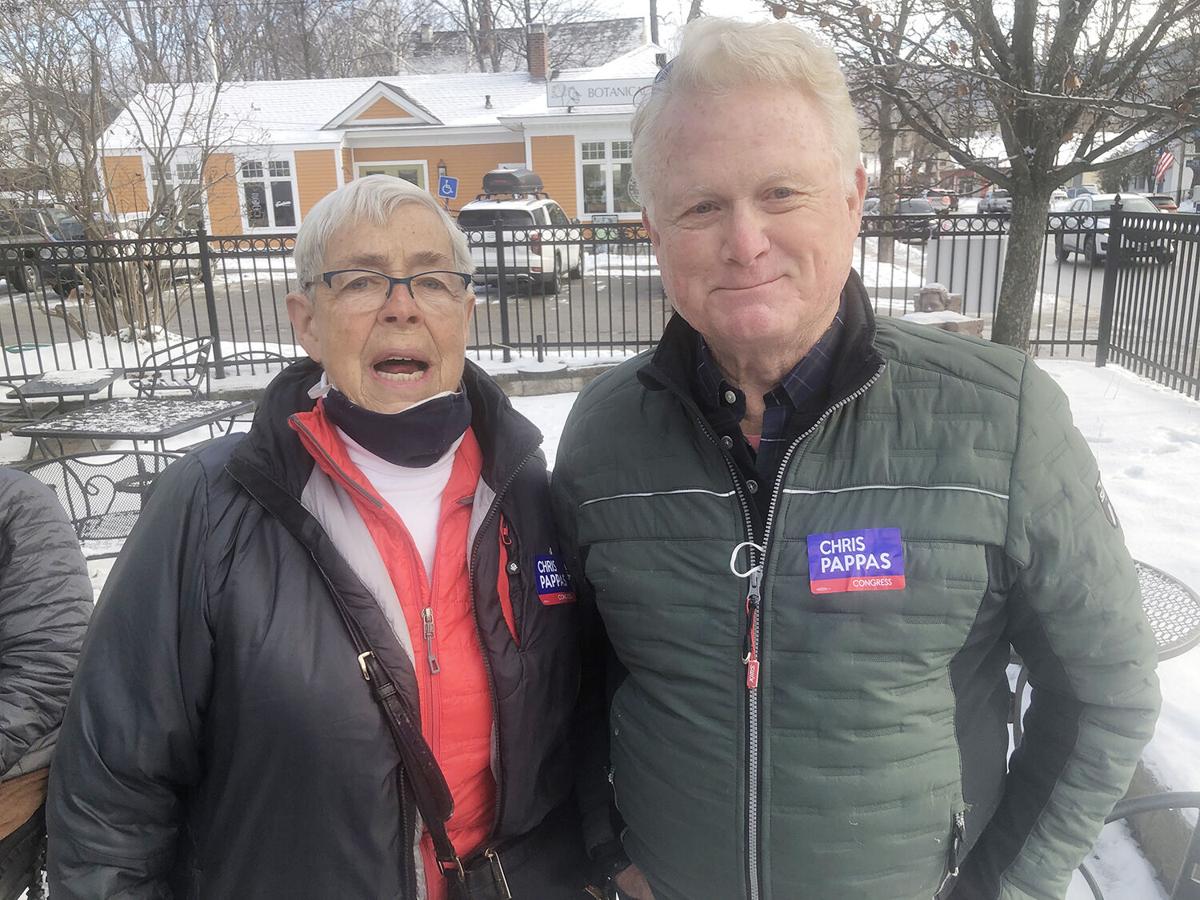 Gail Paine (left) of Intervale and state Rep. Chris McAleer (D-Jackson) seen Sunday in North Conway both shared their family connections to the air attacks on the Naval fleet at Pearl Harbor by Japanese forces on Dec. 7, 1941. (TOM EASTMAN PHOTO) 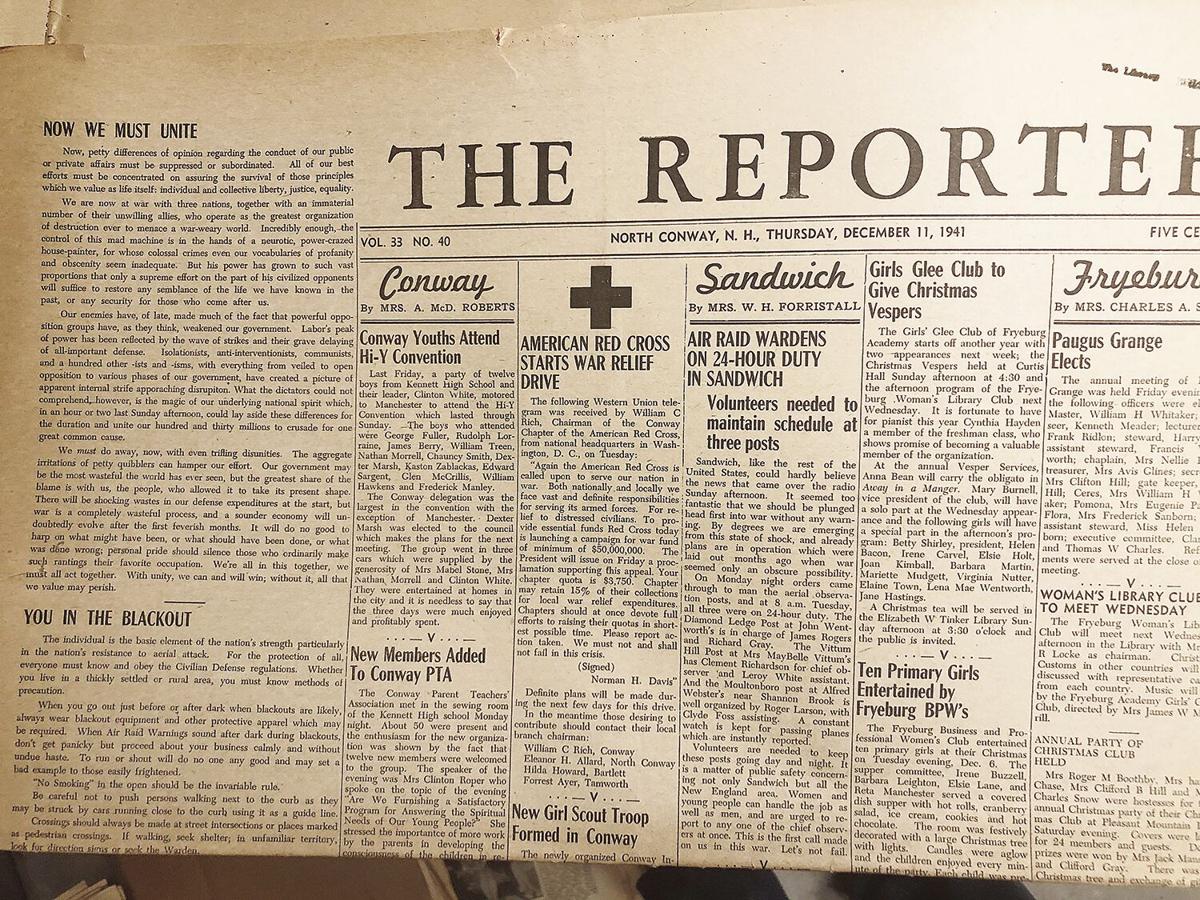 A front page editorial (at left) in The Reporter urged Americans to unite in the war effort against Japan, Germany and Italy following the surprise attack on Pearl Harbor on Dec. 7, 1941. (TOM EASTMAN PHOTO)

Gail Paine (left) of Intervale and state Rep. Chris McAleer (D-Jackson) seen Sunday in North Conway both shared their family connections to the air attacks on the Naval fleet at Pearl Harbor by Japanese forces on Dec. 7, 1941. (TOM EASTMAN PHOTO)

A front page editorial (at left) in The Reporter urged Americans to unite in the war effort against Japan, Germany and Italy following the surprise attack on Pearl Harbor on Dec. 7, 1941. (TOM EASTMAN PHOTO)

CONWAY — Today marks the 80th anniversary of the Japanese surprise attack on the U.S. Naval Fleet at Pearl Harbor in Honolulu, Hawaii by the Imperial Japanese Navy Air Service on the morning of Dec. 7, 1941.

Ceremonies will be held at the USS Arizona Memorial today in Hawaii with about 150 World War II veterans, including approximately 40 Pearl Harbor survivors, present at Kilo Pier for the main ceremony. Eight hundred members of the public were awarded seats in a lottery to view the livestream at Pearl Harbor National Memorial’s Visitor Center.

Like the terror attacks of 9/11 in September 2001, the events of Dec. 7, 1941, scalded the American public’s sense of safety and prompted President Franklin D. Roosevelt to urge Congress to declare war on Japan on Dec. 8, marking America’s formal entry into World War II.

Roosevelt famously proclaimed in his address to Congress that Dec. 7 would be a “date which will live in infamy.”

Nine Granite State servicemen — five sailors, one Marine, two soldiers and an airman — were among those killed in the attack.

Although ceremonies were held in Manchester on Sunday, no local ceremonies are planned for Conway to commemorate the attack, American Legion Post 95 Commander/Army veteran Jim LeFebvre of North Conway said it is a time for all Americans to pause and reflect on the sacrifices of that day eight decades ago today.

“It is somehow a fitting tribute to the 16 million Americans who served on active duty in World War II that two days prior to the 80th anniversary of the day that ‘will live in infamy’ (Dec. 7. 1941) Bob Dole, one of the members of America’s greatest generation, passed away,” LeFebvre told the Sun

“As you drive around the Conway area and pass a school, a Post Office, or other state or federal government facilities, not to mention local American Legion Posts, take a moment to really think about what the flags flying at half-mast symbolize. They are clearly meant to honor former Sen. Dole, for his lifetime of service to America, but equally importantly, they represent our final salute to yet another member of the generation that destroyed Nazi Germany and the Japanese empire. Less than half a million World War II veterans are still with us, and they join ‘the forever post’ about a thousand times a day. May they Rest in peace, knowing that they are honored by us all for their service and sacrifice in defense of America.”

Former Post 95 Commander John Pandora, 91, of Brownfield, Maine, was 11 years old on the day of the attack on Pearl Harbor and living in Brownfield.

“That was before television, of course, so I heard it like everyone else on the radio as my parents were listening to it about the attack,” said Pandora, who said like 9/11, it was a shock to everyone to hear the news.

“My father — who was an electrician — enlisted in the Navy in 1943, even though he and my mother had five kids with a sixth on the way. He was 33. He didn’t ask for a deferment — he felt it was his duty to do what he could. They sent him to electrician school and he was sent to Pearl Harbor — he served on a minesweeper that got sunk while on duty in the Pacific in late 1944. He got sent home in 1945,” said Pandora, who joined the Navy following high school in 1948, although he was not called up until 1949.

At Sunday morning’s re-election campaign launch at the Frontside Coffee Roasters in North Conway by U.S. Rep. Chris Pappas (1st District, D-N.H.), among the 20 or so in attendance were Gail Paine of Intervale and state Rep. Chris McAleer (D-Jackson).

Paine said she was 4 years old when the attacks occurred and two of her uncles had joined the Navy prior to the attack. “I remember it. My Uncle Bill and Ted Eisenhart (of Philadelphia) had already joined so it was crushing when it happened. They served in the Pacific during the war,” said Paine.

McAleer said his father, Robert McAleer, had been enrolled in ROTC at Harvard and was serving as chief engineer aboard the medium light cruiser, the USS St. Louis (CL-49) at Pearl Harbor the day of the attack.

“He never saw any of it happen as he was down in the engine room — it took a few hours to get the engine going but they did and were able to get it safely out of port. It was not attacked, but later he was serving on the Cleveland class light cruiser, the USS Columbia at the Battle of Leyte. They got hit by a kamikaze (off Lingayen Gulf on Jan. 8, 1945). He was awarded the Bronze Star and after he got out he served in the reserves and retired as a captain,” said McAleer.

This reporter’s personal connection to the attacks of Pearl Harbor is through my late father, Navy Capt. Robert S. Eastman (1919-70), who was supposed to graduate from the Naval Academy with the Class of ’42 but after Dec. 7, 1941, he and his classmates received their commissions and were sent to active duty. It was the start of a 25-year naval career for him — and our family.

For more on World War II history, go online to wrightmuseum.org or visit it in Wolfeboro when it opens, May through October, as it is a great resource about the war years.