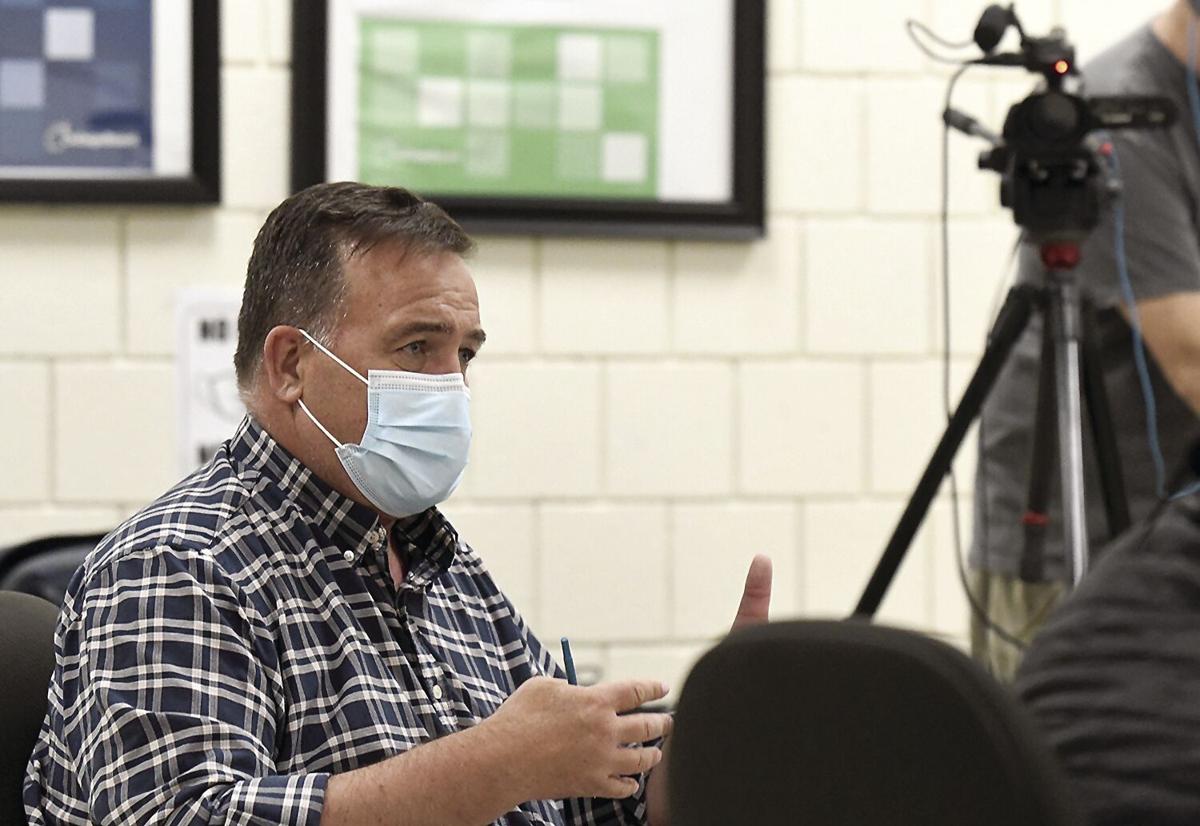 Jim Hill, director of administrative services for SAU 9, explains plans the Upper Saco Valley Land Trust has to install a bridge connecting to the playing fields and the Ravine Trail at Kennett High School in July to the Conway School Board on Monday night. (LLOYD JONES PHOTO) 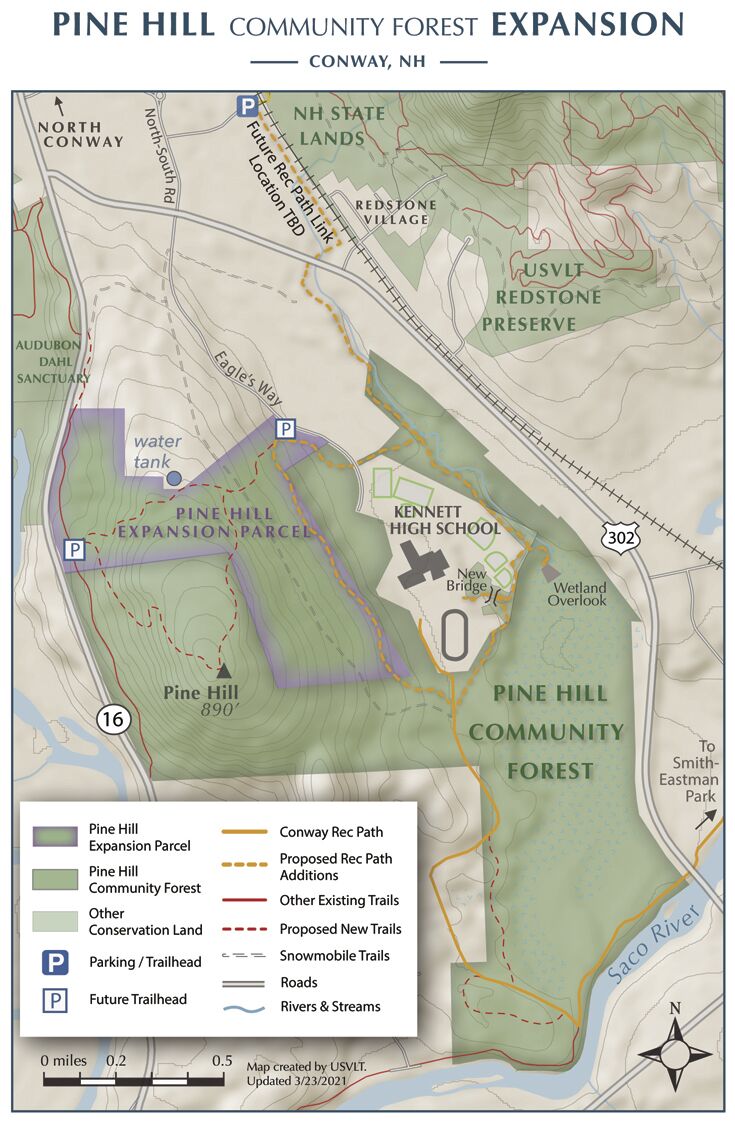 Jim Hill, director of administrative services for SAU 9, explains plans the Upper Saco Valley Land Trust has to install a bridge connecting to the playing fields and the Ravine Trail at Kennett High School in July to the Conway School Board on Monday night. (LLOYD JONES PHOTO)

CONWAY — Softball fans and outdoor enthusiasts will have no excuses to be late to games when they visit the playing fields at Kennett High School in July. The Upper Saco Valley Land Trust hopes to complete a bridge from the bus parking lot to the athletic fields, which eliminates roughly a quarter-mile walk for spectators.

“It’s great news,” Joe Mosca of the Conway School Board said at the board's May 24 meeting.

In addition to making it easier for players and spectators to get to the fields, the trail system is expected to eventually connect to the Conway Rec Path Trail.

The bridge is a prefabricated steel truss pedestrian bridge, 45 feet long and 6 feet wide. It has a projected cost of $34,285, and officials estimate it will cost an additional $7,000 in labor for the six-week installation project.

The project, which will be funded primarily through grants, will not cost the school district a penny.

Land steward Peter Howe met with the school board on Feb. 10, 2020, and received unanimous support for the project, which should begin construction in June and be complete in July.

“When Kennett High was first constructed (in 2007), we needed to affect some wetlands to access. and as a result, developed a plan with the state to mitigate this effect by placing several acres in a conservation easement that’s overseen by Tin Mountain Conservation,” Superintendent Kevin Richard said.

“Part of that conservation area is a steep ravine between the bus parking area and the softball field on the opposite side. Several years ago, due to the long walk from the general parking area to the softball field (for home and visitor spectators), the (Conway School Board’s) Facilities Committee examined the possibility of installing a bridge across the ravine. At the time it was too cost-prohibitive and not a priority.

He added: “Over the past year, the Upper Saco Valley Land Trust has been working with the Pine Hill Community Management Committee (Jim Hill, director of administrative services for SAU 9, is the district’s representative on that committee) to develop a master plan for the area as it relates to recreation and education for the school and general community.

"As part of that plan, a representative of USVLT met with the Conway Facilities Committee last year to give them an update on where things were going, and the facilities committee was extremely supportive of the progress that was being made," Richard said.

Hill, said he was amazed by the scope of work that is taking place.

“I had no idea when I when I got involved in this stuff of how much stuff is going on valleywide and towards Fryeburg,” he said. "I just saw the Maine news that they’re looking at a feasibility study to connect the Fryeburg Rail Trail to Standish, Maine.”

He added: “I think this is going to be a trail network that in the next 15 years is going to go from the upper part of the Mount Washington Valley all the way to Portland, Maine, and this is just a piece of it.”

The land trust acquired 460 acres of land surrounding Kennett High School to create the Pine Hill Community Forest in 2018. The trust then formed the Pine Hill Management Committee to manage the land as a community resource “for fostering recreational and educational opportunities while protecting the ecological and scenic value of the area.”

Howe said that in 2019, the committee worked with a professional trail consultant to “create a comprehensive trails plan” for Pine Hill. They identified the construction of a “Ravine Trail as a high-priority project.”

Hill spoke about what is being called the “Ravine Trail.”

“This is looking to connect basically the high school to the (Conway) Rec Center trails, which goes down over towards where the old Eastman Covered Bridge landing is,” he said.

“There were other projects that they were looking at doing in a phased approach, but those required some wetland’s type permitting. So they decided to kind of take this a little bit out of order. USVLT knew they had the support of the school after they had their presentation (last year) and the facilities committee’s support.”

There’s a lot of support for a bridge to the ballfields, according to Hill.

“I think seven or eight years ago, we looked at this again,” he said. “There were parents that were complaining that you had to park in the general parking area and had to walk up by the loading dock out around. And we looked at the cost of putting a bridge across from the main parking area to the softball field, and again it was just cost-prohibitive.”

Hill added: “This group has gone out and found the funding as part of this trail network to do this at no cost to the district. And it is just this is the tip of the iceberg on where the trail network is going. There are representatives on (the committee) there that are our hiking folks, there are mountain biking folks, there are ATV people, there snowmobile people and it is such a great cross-section, cross country skiing, you name it, they are represented. And everybody is so respectful that this is going to be huge over the next 15 years. And we're starting it off at the school. And it's going to be interconnected with this whole thing. Do I sound excited?”

Joe Lentini, chair of the school board, asked if the bridge would lead to a trail that connects with the Saco River under the bridge on Route 302.

“Yes, it does,” Hill replied. “And there's a piece that they started to the right of that maintenance building (next to Gary Millen Stadium on the KHS campus) that they did a few years ago that goes up there. This group and the folks that they work with are professional trail designers looking at irrigation, erosion and all types of things. It's really amazing.”

“They’re hoping to install the bridge by late July, does that then open up access to the back ballfields at that time,” Mosca asked. Hill said it would.

“By next fall, when sports start up again, people will have access out there,” Mosca said.

“It's not going to be a major structural thing, but you’re going to be able to get from the parking lot to the softball field much easier,” Hill said.