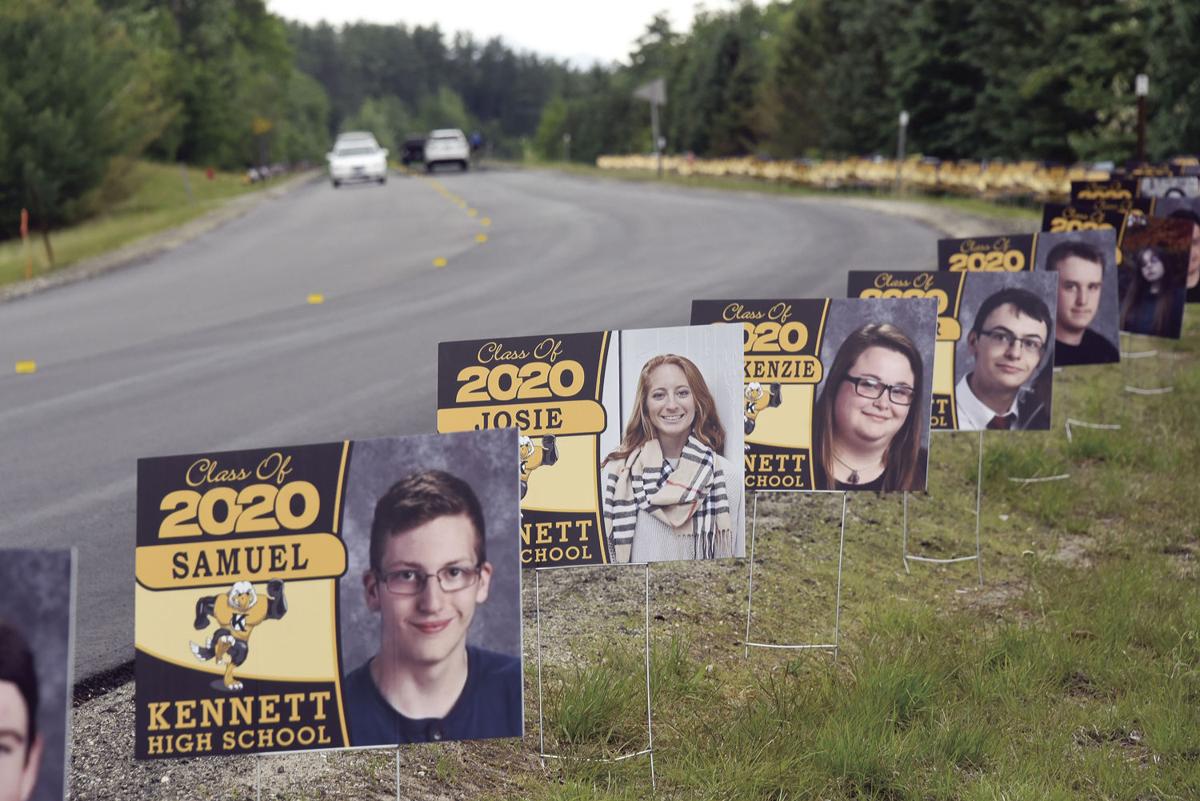 Yard signs with photos and names of the Kennett High School Class of 2020 graduates are seen along North-South Road in North Conway on Wednesday. The graduation is planned for the top of Cranmore Mountain on Saturday, with graduates and their guests traveling to the summit by chairlift. (JAMIE GEMMITI PHOTO) 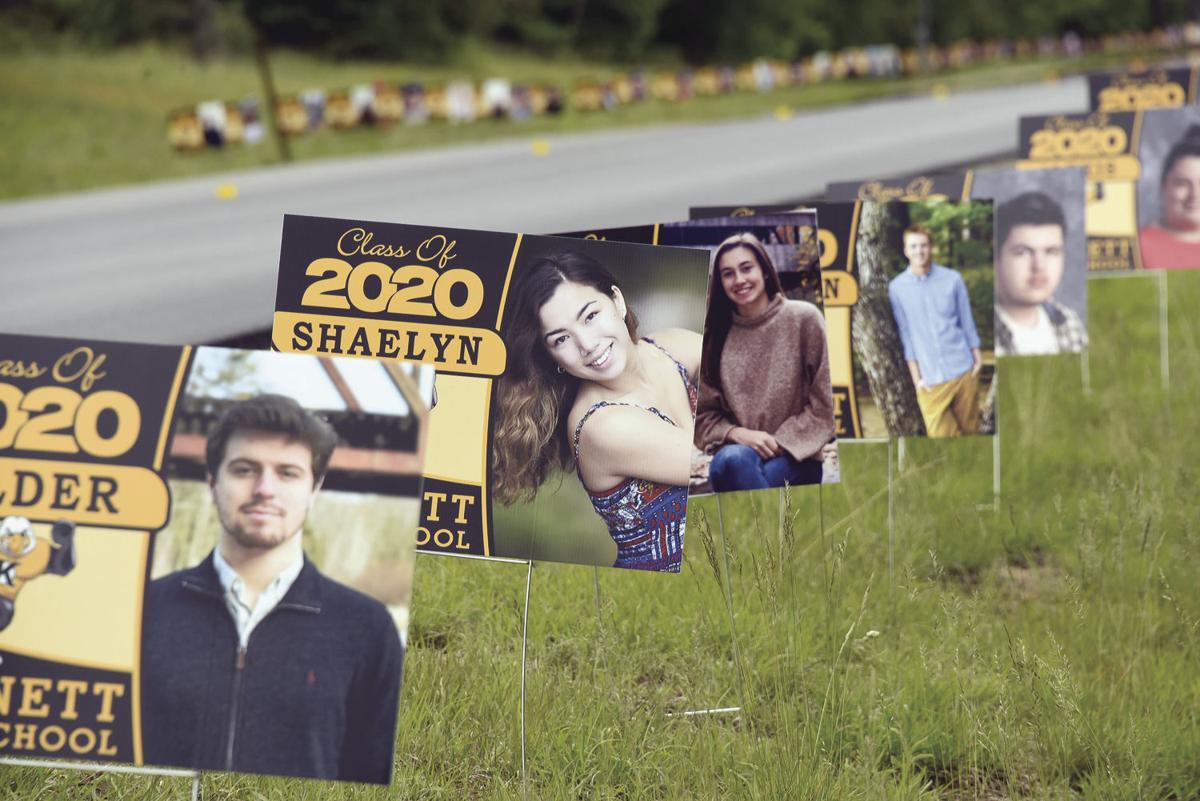 Each of the approximately 165 Kennett High graduates is represented on a yard sign placed along North-South Road in North Conway Wednesday. (JAMIE GEMMITI PHOTO) 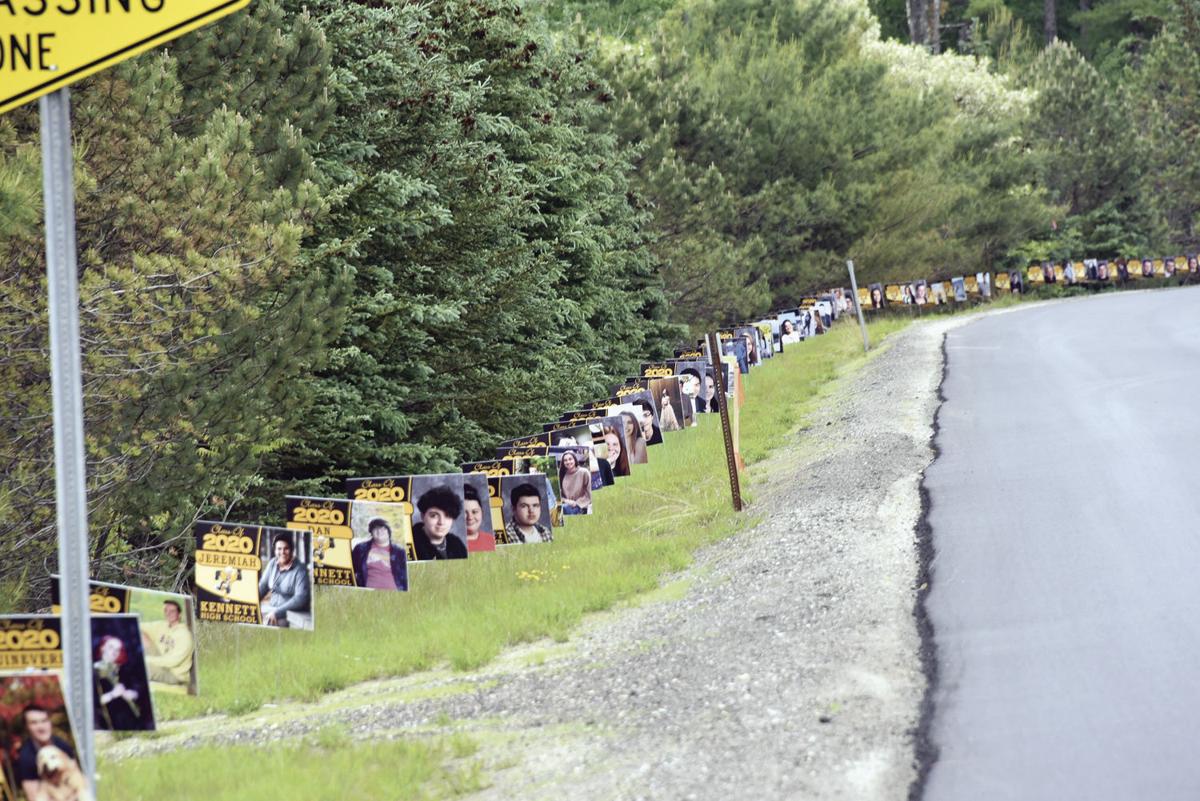 Yard signs with photos and names of the Kennett High School Class of 2020 graduates are seen along North-South Road in North Conway on Wednesday. The graduation is planned for the top of Cranmore Mountain on Saturday, with graduates and their guests traveling to the summit by chairlift. (JAMIE GEMMITI PHOTO)

Each of the approximately 165 Kennett High graduates is represented on a yard sign placed along North-South Road in North Conway Wednesday. (JAMIE GEMMITI PHOTO)

CONWAY — A graduation unlike any other is set to take center stage for the Kennett High Class of 2020 this Saturday.

The hometown flock of Eagles, who finished their final third of the school year remotely due to the COVID-19 pandemic, will receive their diplomas atop of Cranmore Mountain in North Conway, most after riding to the summit in the Skimobile Express quad chairlift.

Graduation is scheduled to begin at 8:30 a.m., running until about 4 p.m. For each of the approximately 165 students who are graduating, the ceremony will take a little more than half an hour, including the chairlift ride in which he or she will be accompanied by up to four guests.

The day will be capped by a planned caravan through North Conway and Conway villages, kicking off at 6 p.m.

The forecast looks good for Saturday. AccuWeather is calling for a high temperature of 73 degrees, and “pleasant with times of sun and clouds,” and a 12 percent chance of rain.

“The big day is almost here,” KHS Principal Kevin Carpenter said by phone on Thursday. “It’s been a lot of work, but it’s all going to be worth it, these guys deserve a day to remember.”

Pre-graduation festivities actually kick off Friday at 7 p.m. with pre-recorded graduation speeches and the presentation of special awards being aired on Valley Vision (Channel 1301) and on the Kennett High YouTube channel.

Graduation will also be live-streamed on the Kennett YouTube channel at 8:30 a.m. Valley Vision plans to re-air graduation next week.

Kennett has received requests from national media (CNN and Getty Images) to cover the graduation.

Due to the coronavirus, social distancing must be adhered to.

Unlike other Kennett graduations where nearly 1,000 people have turned out to Gary Millen Stadium to celebrate the graduates, the public is being asked to save their cheers until the caravan later in the day.

Each of the graduates and their guests, who have been given tickets, has been assigned a specific time to arrive at the mountain, no more than 15 minutes before their planned chairlift ride.

“We know people want to be there to be supportive and to see their friends, but we’re asking them to please refrain from doing so,” Carpenter said. “The time to see these seniors is during the caravan — come out and be loud and proud.”

“Thank you, Raven, Phoebe, Grace, Sophie and Reilly for all that you have done for graduation, but also this year,” Carpenter said. “I know all of you have been active members of the Kennett community and I appreciate everything you have done.”

“On graduation day, I'm hoping that everything goes as planned (especially in terms of people following the rules due to social distancing) because I really couldn't have asked for a better graduation under these extremely different circumstances,” said Stimpson, who lives in Intervale.

Stimpson, who plans to attend James Madison University in Harrisonburg, Va., the fall, said her four years at KHS have flown by.

"Seeing my high school career come to an end is just really putting into perspective all of the hard work my classmates and I have put into getting to where we are today, and where we are going in the future, as well as how much the adults in our school, community and families have supported us to help us all succeed,” she said. “It also really shows just how fast it all goes by.”

She said she will remember friends, teachers and family, as well as the very different circumstances of her final year of public school.

"Despite the disappointment from not ending the way we hoped for, I'm just so grateful that our community, school administration, faculty and parents are all putting in so much effort to still celebrate us, and I think it’s the best way to celebrate us under these very different circumstances,” she said.

Once each student reaches the summit of Cranmore, he or she will stop at the east bowl, be announced by Carpenter, presented with their diplomas, have a photograph taken and be acknowledged by Superintendent Kevin Richard and Conway School Board Chairman Joe Lentini, then proceed to the Meister Hut, where another photo will be taken on the ledges. Then the student and his or her guests will head back down the mountain.

Special arrangements are being made to handle the press because of the national attention the event has received.

Carpenter said: “Cranmore has brought on Drive Brand Studios (of Kearsarge, owned by Nancy Clark) to handle the media publicity related to the event, which they're going to help us coordinate and bring in a crew to actually do some filming in advance, do some pre-canned interviews, and then they'll send out a B-roll (is supplemental or alternative footage to intercut with the main shot) so that we don't have to worry if people are trying to fight to get in.

“We will have that all set for them so that any media outlet that wants it can just have access to that so we can continue to make sure the focus is on the graduates," he said, noting that Drive Brand is also planning to have a videographer to create a commemorative film of the event.

Capping off the day, the Kennett Karavan, as it’s being called, will assemble at the high school with vehicles lining up on Eagles Way at 5:30 p.m., then head up North-South Road, turn left onto Kearsarge Road, then loop back south down Route 16, eventually ending in the parking lot of the Ham Arena on West Main Street in Conway Village.

This will be Carpenter’s first graduation as principal.

While he is sad that this year's class has missed out on such traditions as the prom, spring sports seasons and senior skip day, Carpenter said, students have been very appreciative of the school's and and the community's efforts.  "As bad as all of this has been, I think we’ve all really had a chance to connect Kennett with the community a little bit more.”

“We’ve had so many people step up to offer to help and their support,” he said. “It’s really been a true team effort.”

Joking, he said, “My fear is if people love it, what do we do next year?”