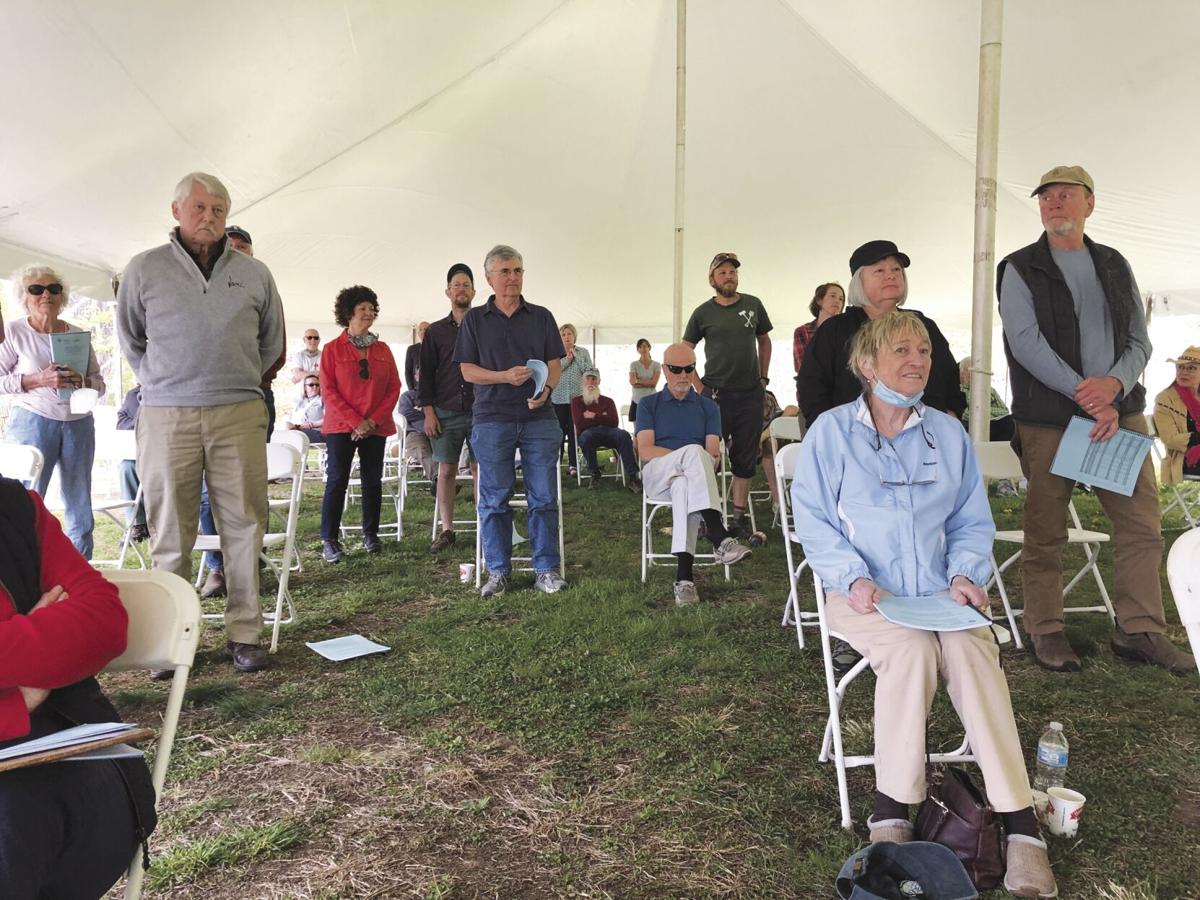 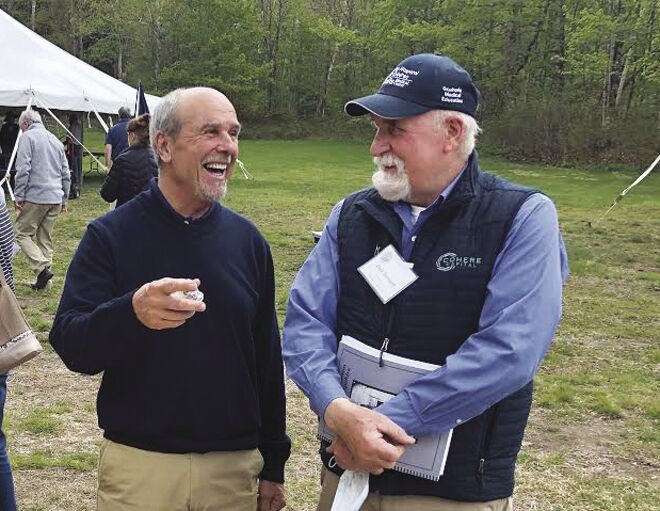 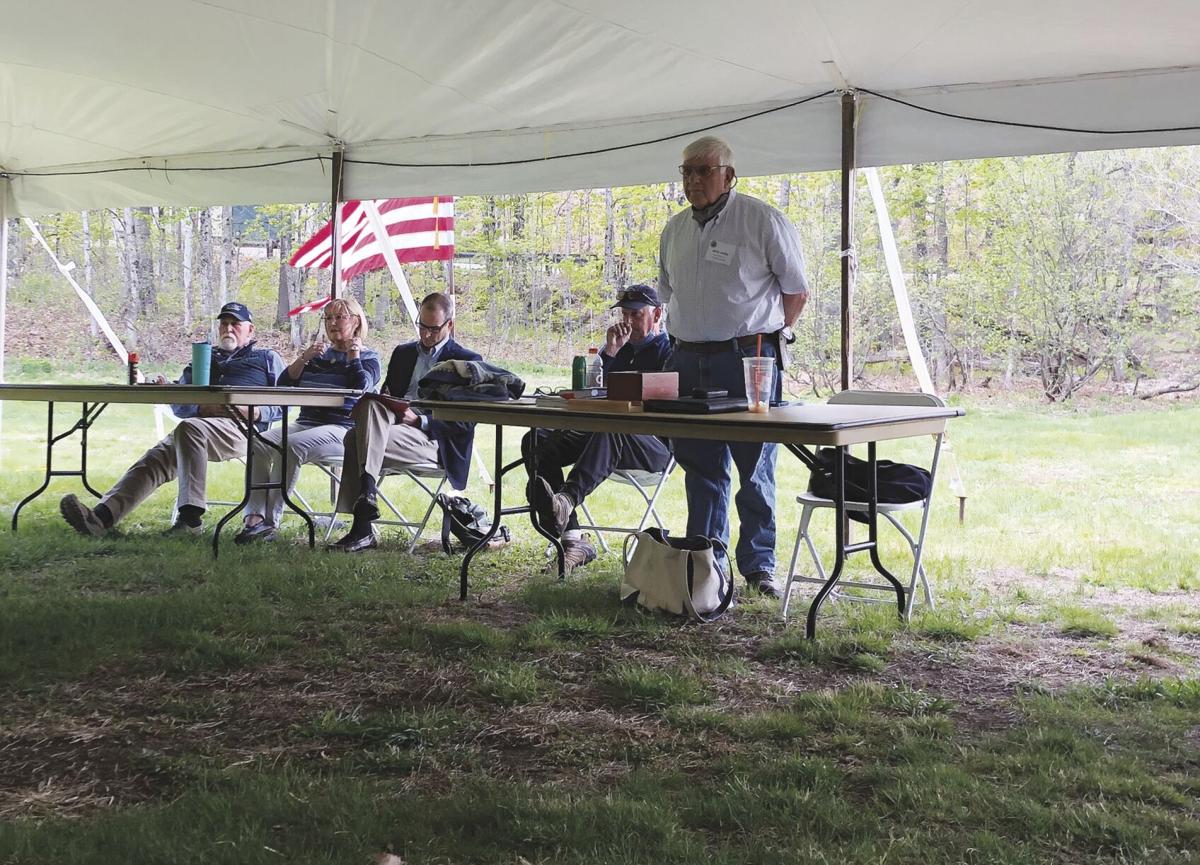 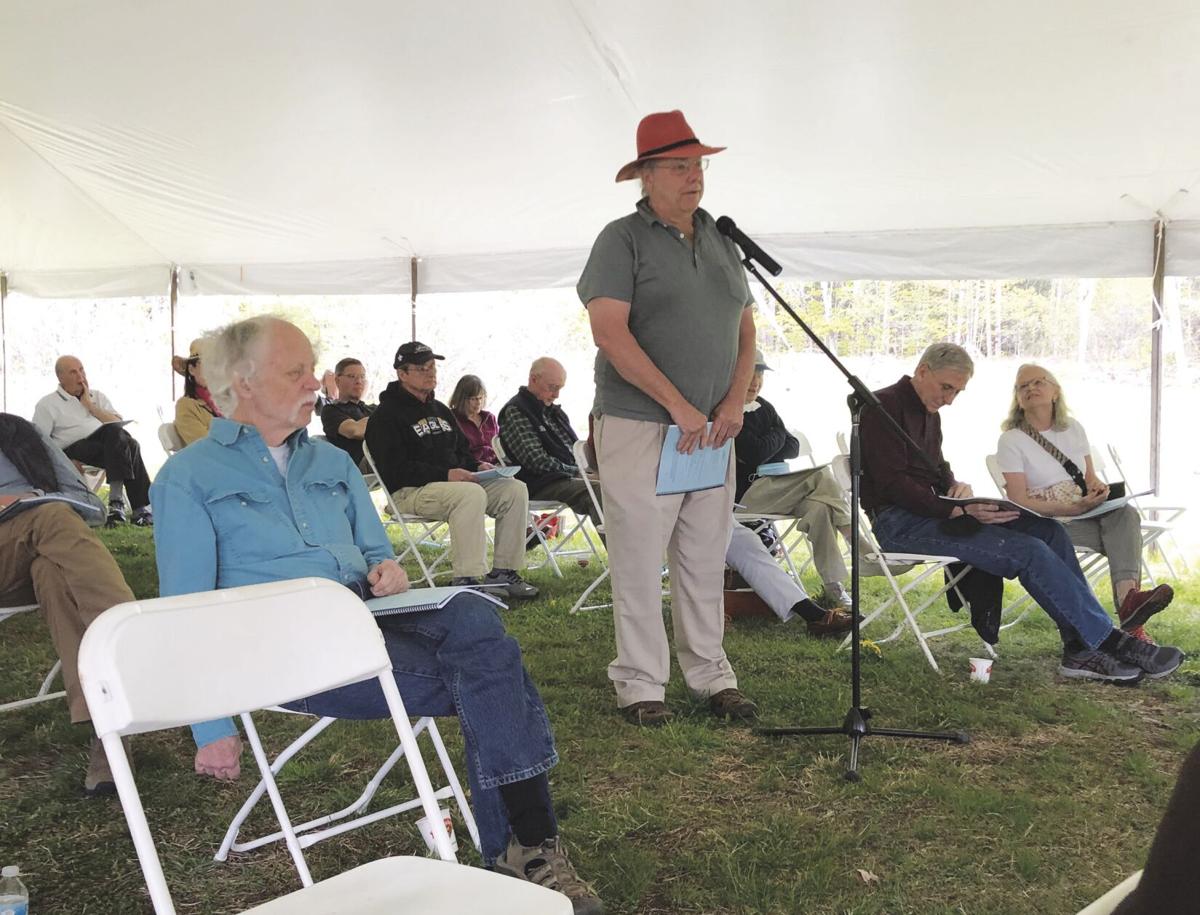 JACKSON — About 90 citizens turned out for Jackson’s town meeting last Saturday morning. It was held under a tent behind the Whitney Center, and most doffed their masks.

Moderator Willis Kelley, presided, along with selectmen Dick Bennett (at his last meeting; he chose not to run), Barbara Campbell and John Allen, and town counsel Peter Malia of Hastings Malia of Fryeburg, Maine.

Most of the 11 warrant articles were dealt with quickly. All passed.

Receiving the most discussion was Article 9, petitioned by selectmen to prohibit fireworks without a permit. The most controversial was Article 10, to rename the town for geologist Jackson, was petitioned by Assistant Town Moderator Jerry Dougherty.

Article 3 dealt with the operating budget of $2,374,832. Resident Sarah Clemons brought up the point that town employees and their salaries weren’t listed as either full-time or part-time in the town report. She also noted a 3 percent “across the board” increase in salaries and said, “We have to understand that our pocketbooks must be thought about.”

Article 4 was to raise and appropriate $268,500 to be placed in capital reserve funds for the fire department, police cruiser, Bartlett/Jackson ambulance and road reconstruction, among others.

Article 5 was for $103,500 in appropriations for expendable trust funds, including bridge repair, transfer station and police department equipment.

Article 9, to adopt an ordinance to regulate fireworks, set off a lively discussion, starting with fire department member Peter Benson, who said the article was confusing. He asked if just anyone could get a permit to set off fireworks.

Police Chief Chris Perley explained that the ordinance (defeated last year) included the language about exempting licensed fireworks displays “because if we didn’t have that exception, then we wouldn’t be able to have Independence Day fireworks.

“Those people are professional, they’re trained, they have insurance liability, fire suppression systems, so that’s why the licensing was in the original ordinance, and that’s the ordinance the selectmen are now proposing as well,” Perley said.

But Benson pressed him, saying Section II prohibits fireworks “within the boundaries of Jackson by any person not licensed, by permit of the town,” so, he said, the town is the permitting authority, not anybody else.

“If we’re talking about prohibition, let’s prohibit, but if you’re talking about regulating, that’s what this is,” Benson said. “I just want to get this cleared up before I come in for my permit on July 3.”

Bennett said, “You’ll get a permit if you have a state license to be an operator and if you can show a certificate of insurance that you are insured for a fireworks display.”

Benson responded, “That’s not the way the ordinance reads.”

Bennett said, “That’s what the town will require to get a permit.”

Asked to weigh in Malia said he did not help write the ordinance. “I am hearing this for the first time.” But, he said, “My understanding is that it exempts small fireworks displays.”

People would have to vote “yea or nay the way it is written because we can’t amend it now. Presumably it has been through a public hearing process. Perhaps Mr. Benson will vote against it. The rest of you will have to make your own decision.

“I heard you say it’s not like a burn permit. You won’t be able to get a permit for a private party. So it is more of a prohibition, except for the bigger events. Maybe you’re not satisfied with the way it’s written, but that’s how it has been interpreted,” Malia said.

Jeff Maynard asked selectmen to explain the motivation for the permit, and Bennett replied that “short-term rentals are probably driving this.”

Fireworks at short-term rentals, Bennett said, “have been a problem with people coming up from Boston, driving through Ossipee, seeing the big fireworks store, stopping in, buying a bunch of fireworks, going up to Tyrol for the weekend and shooting off fireworks at midnight, and the police really don’t have the leverage to go in and stop that behavior.

“I was against the ordinance last year because I was a fan of fireworks,” Bennett continued. “But I can see that it is needed now in order to have that in the realm of police enforcement.”

Resident Robert Burton reminded people that fireworks are legal in the state of New Hampshire. He said if you have a family gathering, “you want to shoot off a couple of Roman candles, to have the police come down and be able to prosecute, that’s taking it way above.

“If we have problems with the short-term rentals, let’s work that out as a law, maybe do what Conway does so we can spend a lot of money on attorneys,” Burton said, to laughter. “Now the thing that’s here, if I shoot off a couple of bottle rockets, I’m going to be arrested?” He then advised people to defeat the ordinance.

Perley said fireworks merchants keep a list of towns that don’t prohibit them. “As soon as you have an ordinance, you will be on the state list, ‘these are prohibited.’ So that will reduce the instance of the disturbances.

“When this ordinance was proposed, it was because there were complaints,” he added. “You may say it’s about freedom, and you may say everybody likes them, but our phone rings off the hook every summer because of fireworks.

“As far as safety, I think it’s a fool’s errand to say it can be done safely. You may handle them, and you may not get hurt, but the International Association of Fire Chiefs says there are no safe consumable fireworks,” Perley said.

Residents stood to vote. There were 60 ayes, 27 no votes. The article was declared passed.

Resident Frank Benesh opposed the article. “Measured by what was his century, Andrew Jackson accomplished a lot of exemplary things, most notably leading the victory at the Battle of New Orleans, which had he lost may have had a very dramatic influence on what happened at the Louisiana Purchase. Perhaps even reverting back to Spain.

“I think it’s a hopeless task to try and measure historical figures by today’s standards,” he said.

Dougherty reminded the group that Andrew Jackson was responsible for the Trail of Tears that displaced 100,000 Native Americans, and during which “over 15,000 children, women and men died.” By any standards, he said, “that was horrible. This was a man who bragged that his reins for his riding horses were made from the flesh of Native Americans.

“This is intolerable, then or now,” Dougherty said. “I think we have a man, Charles Jackson, who has ties to this area, whom Mount Jackson was named after. By voting this up or down, we’re still going to be Jackson tomorrow,” he said. “It’s just what’s in our heart.”

Article 11, “any other business,” brought recognition for outgoing Selectman Bennett, who humbly tipped his cap to the ovation.

Absolutely Ridiculous!!! Woke Cancel Culture has come to the north country! This is very sad!

Glad i dont live there.