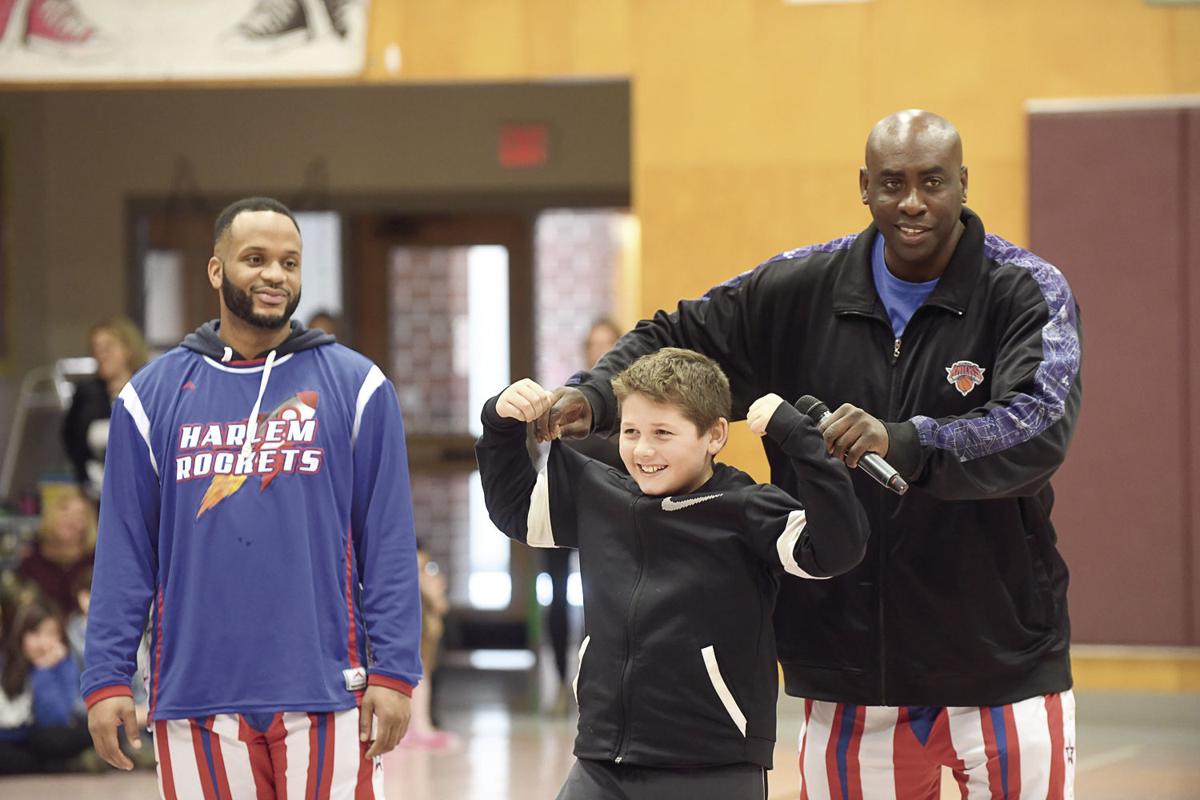 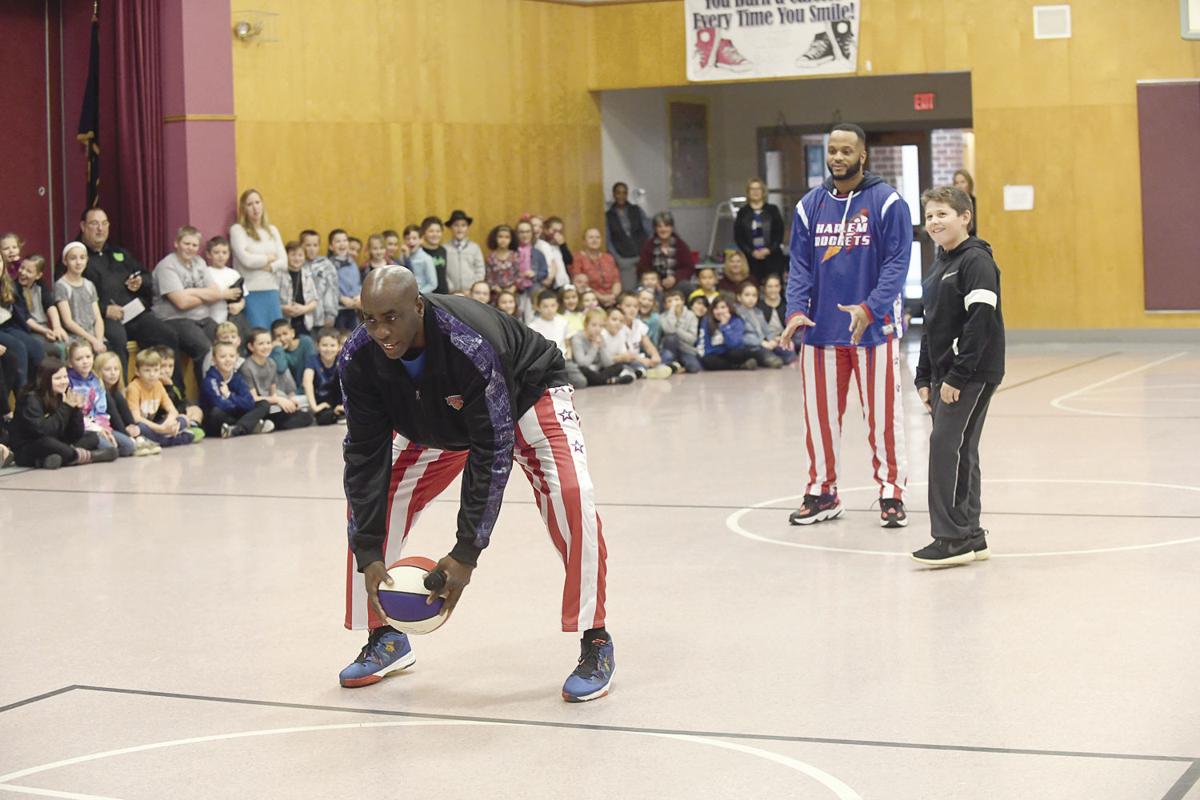 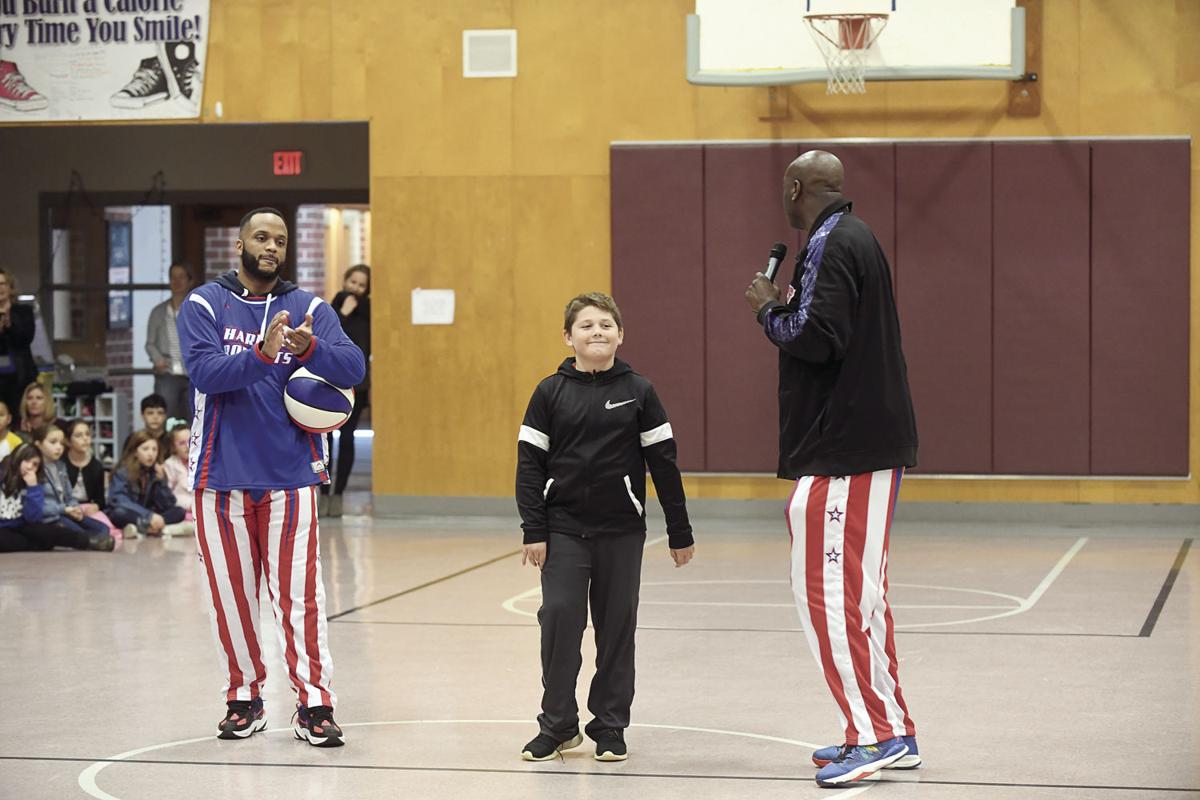 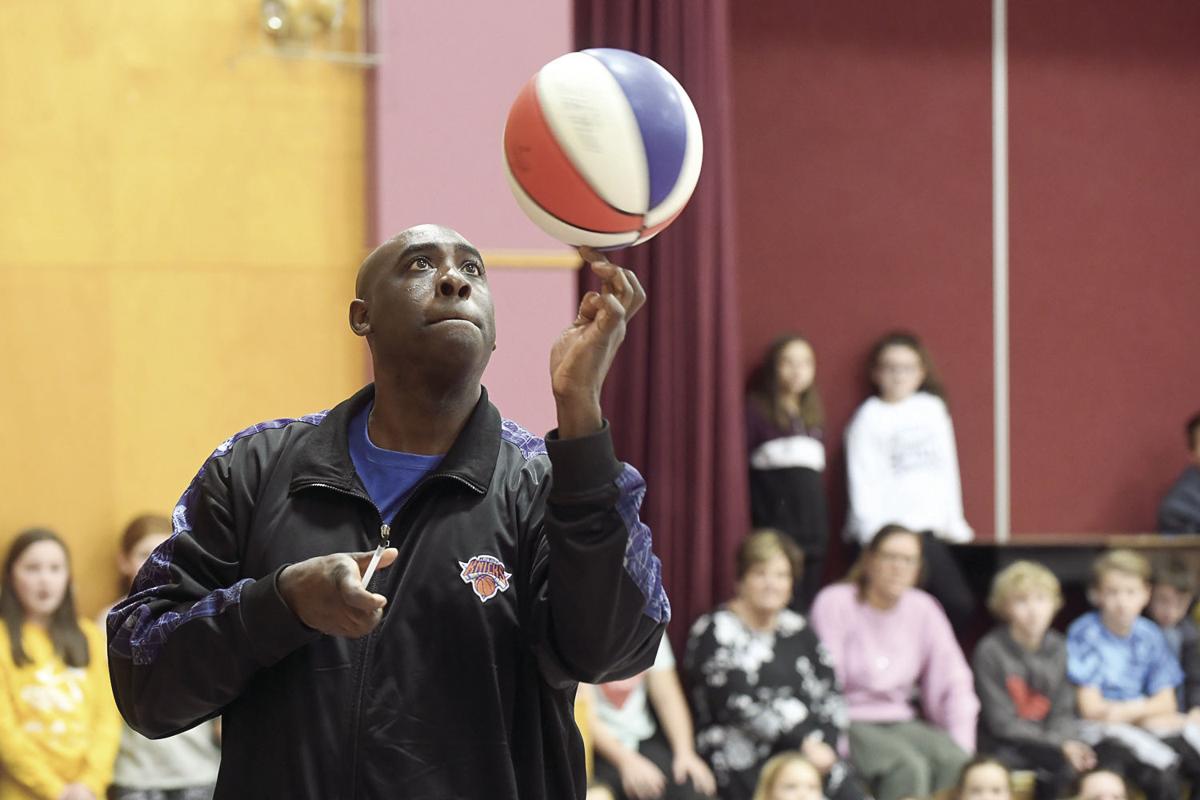 CONWAY — Basketball with a message — that’s what the Harlem Rockets brought to the local elementary schools in the Conway School District on Thursday before squaring off against the Kennett Middle School All-Stars later that evening. The event benefits the KMS eighth-grade field trip to Philadelphia next spring.

Kevin “Showboat” Jackson and Jerome “Swish” Harris, who played for the Penmen of Southern New Hampshire University, made stops at Conway Elementary, John H. Fuller and Pine Tree Elementary schools Thursday morning to drum up attendance for the evening’s festivities and also to talk about respect. Respect for yourself, your family, your classmates and your teachers.

The Harlem Rockets were formed in August 1993, by Brig. General (Ret.) George Mitchell, who according to the team website, had worked for the Harlem Magicians for several years. In the summer of 1993, he formed his own team.”

The Rockets received a hero’s welcome before a packed student body at Pine Tree School in Center Conway, the first stop of the day for the round ball wizards.

Harris delighted the Pandas by living up to his nickname and swishing a half-court shot on just his third attempt.

Jackson, who played in the NBA Summer League for the LA Clippers and played professionally in Turkey and France, admits he’s the comedian of the team and likes doing trick shots.

“Something strange happened to Swish and Showboat when we came to your school,” Jackson said. “We were walking to the gym, walking down the hall just like this, and then we heard someone say, ‘What are you doing in our school?’ I said we’re not here to hurt anyone, we’re here to do a little presentation before the show tonight.

At that point, Jackson asked, "Where is Landon Ramsey?"

The fifth-grader came out onto the court through a sea of cheers from his schoolmates.

Jackson ran Landon through a few drills, and he passed them with flying colors, including sinking a free throw that tickled the twine and drew nothing but net.

Jackson shared a trick shot where he spun the ball on a finger on his left hand, then transferred the spinning ball onto the tip of pen and finally tapped it off the backboard and through the basket.

“I was able to do this trick because practice does what?” he asked. The students, as one, yelled “practice makes perfect."

Jackson ended the visit with a message: “I don’t want you to tell the teachers that the work that they give you is too difficult and that you can not do it because you can with a lot of practice,” he said. “With the Harlem Rockets, we travel all over and visit hundreds of schools every year. One of the most important things that we like to see is students getting a good education. We take education real serious. Many of us have gone on and graduated from college because we don’t want you to think that we are just basketball players — we are educated basketball players.”

Jackson urged the students to pursue their educations.

"Work really hard so that you can achieve your dreams, graduate from this school and go onto middle school, high school and then hopefully each and every one of you will go on to graduate from college.

He told students to respect their teachers and themselves. "You have to have respect for yourself before you can respect others around you," he said. "Respect your classmates. If you play sports, respect your teammates."