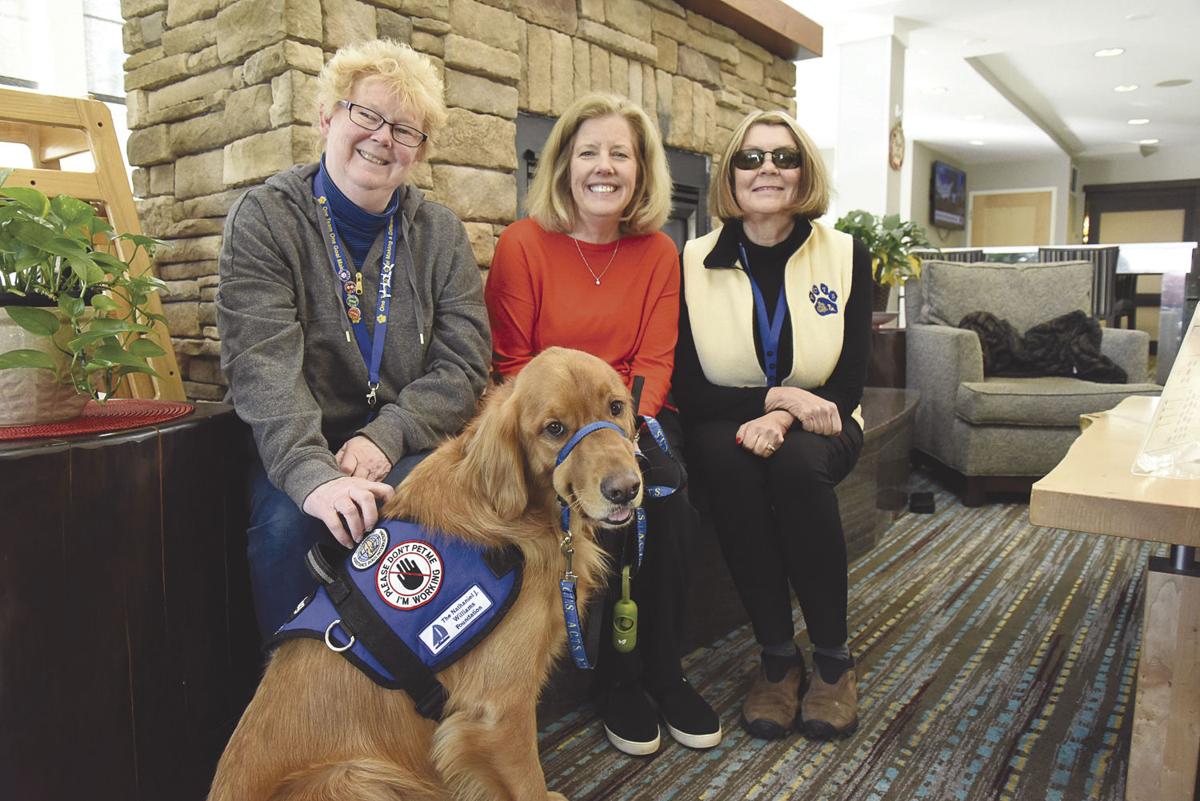 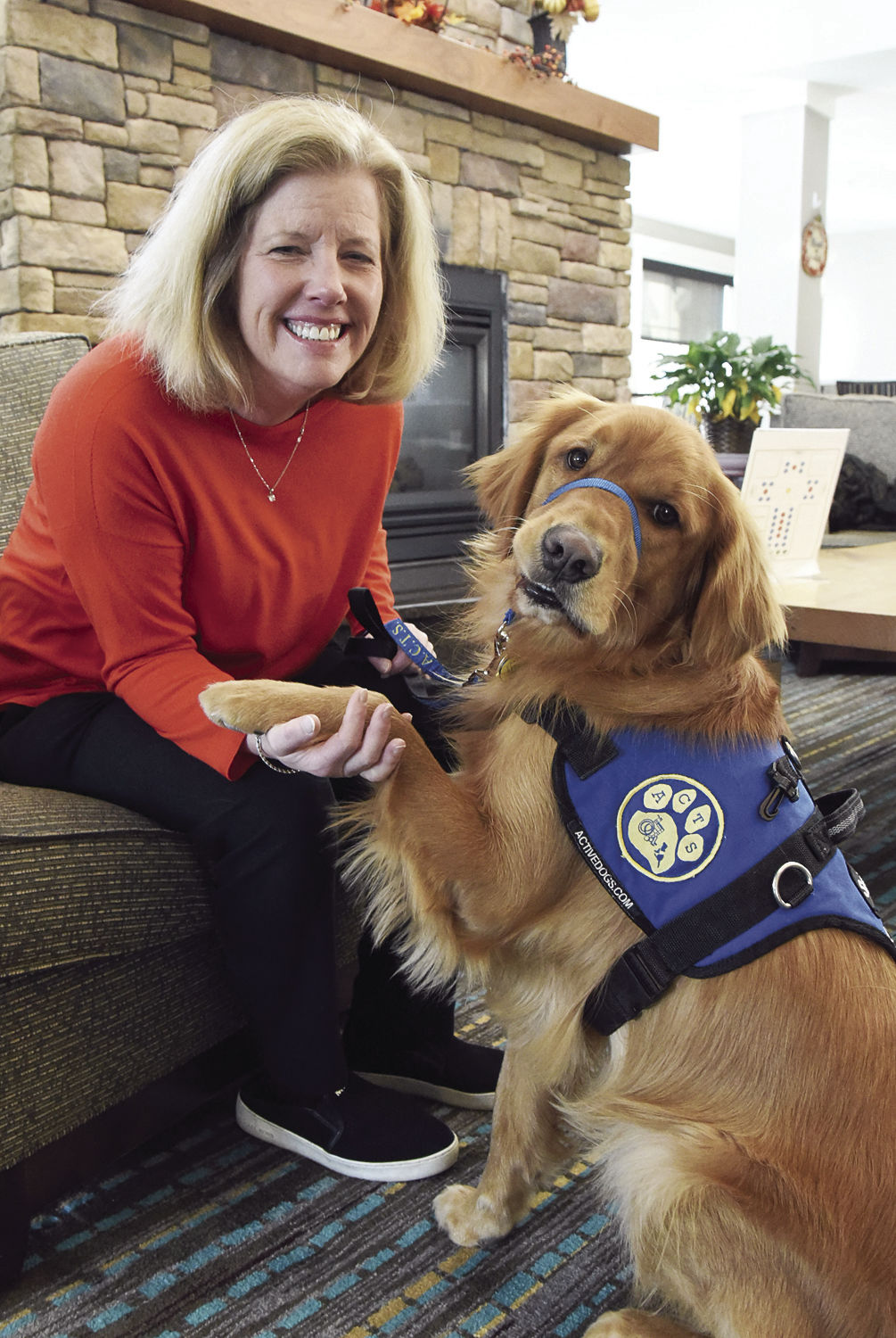 CONWAY — Digger “Diggs” the dog has made many friends as a therapy dog-in-training with Assistance Canine Training Services (A.C.T.S.) in Mount Washington Valley, and now the golden retriever will be making many more as a facility therapy dog for the Seacoast Cancer Center at Wentworth Douglass Hospital in Dover.

Diggs has been doing team training this week in the valley with A.C.T.S. and his new partner, Dr. Barbara Civiello, an oncologist and medical director of the Dover cancer facility.

Accredited by Assistance Dogs International and Animal Assisted Intervention International, A.C.T.S. has been a New Hampshire non-profit for 12 years and is based in North Conway. It trains both service and facility dogs.

In the past dozen years, it has placed 31 dog and client pairings, graduating on average four teams a year.

Diggs has been in training over the past year as a facility therapy dog. According to A.C.T.S.’ chief administrator and head trainer Robin Crocker: “Our facility dogs work five days a week. They work very hard, and they affect the lives of many many people.”

Crocker also owns Telling Tails dog training center in Fryeburg, Maine, which donates space to A.C.T.S. to do their training.

Bred by Hydeaway Golden Acres in Center Tuftonboro and donated by Deb Sellers of Freedom, Diggs, 2, has been seen around the valley for the past 14 months, with volunteer trainer Mary Russell of North Conway at places like Our Lady of the Mountains Catholic Church and post-Mass at the Frontside Grind.

Civiello, Crocker and Nan Ippolito, A.C.T.S.’ director of client relations, with Diggs in attendance, spoke with the Sun on Wednesday at Residence Inn Marriott in North Conway, where Civiello was staying during her training week.

All three agreed Diggs is destined to be a perfect fit in his new role.

“Some dogs show us that they have a special ability that needs to be shared with more than one person,” said Crocker. Digger, she said, “seems to have an ability to find the person in the room that needs his comfort.”

She recalled doing an event with Digger, “and we let a young girl pet him. The next thing we knew he was sitting in her lap. ... We later learned from grateful parents, that Digger had offered some much needed support during that visit.”

Added Ippolito, “This is an amazing placement. Animal-assisted therapy is a field that is being explored more and more.”

Digger visited the hospital and staff at Seacoast Cancer Center prior to placement, where Civiello said the dog immediately performed his caring magic.

“As far as the staff and I am concerned, it was ‘transformative,’” said Civiello. “I loved seeing the nurses and other staff relax, breathe and smile in Digger’s presence.”

During the rest of her training this week in North Conway, Civiello will learn how to handle Digger, how to continue his training and how to use him effectively with both patients and staff.

The training included a visit to Memorial Hospital. Visits to Settlers Green and to Telling Tails were also scheduled.

Civiello said the night before at the inn, Diggs retrieved her slipper from the closet for her. “My other dog at home (a Labrador-hound mix) would go and get my slipper, too, but he would take it off somewhere to go and chew it — but not Digger!” she laughed.

She said she and her husband, Jim, a guidance counselor at the Seacoast Learning Collaborative, a middle school in Rochester, first met Diggs earlier this year as part of the application and review process. She said they were immediately impressed by the dog’s calm, attentive demeanor.

“We both said after meeting him that we hoped that we could get a dog like Diggs, not then knowing that we would end up with him,” said Civiello.

But lo and behold, they were matched up with Diggs, who will live with the couple, and go to work at the hospital with Civiello.

Crocker said A.C.T.S. follows up with clients throughout the life of their dogs.

“We begin by holding monthly follow-ups for six months, then yearly and then every other year,” said Crocker. “After four years, we do a re-certification.”

All of the local A.C.T.S. service dogs will have a graduation ceremony in May at the Journey Church in Center Conway. Last year’s was packed.

Like any foster parent well knows, saying goodbye to a four-legged goodwill animal ambassador is tough emotionally for any trainer — just ask Russell, who became an inseparable part of Diggs’ life over the past year and a half.

“Diggs is doing great and has bonded with Dr. Barbara. No question, I miss him very, very much,” Russell said. “But as long as he’s happy, I am happy.”

“Diggs is a sweet, sensitive, lovable dog,” she continued. “He is very intuitive and knows when someone needs his affection. We are all very proud of Diggs and the good work he will be doing at the Cancer Center.”