The MWV Mudbassadors gave a big shout-out to Mud Bowl fans this week, noting they miss them but will see everyone hopefully at the 2021 Mud Bowl. Shown above (from left) are Renee Ricker, Andrea Martin, Darlene Noyes, Ruth Barone, Brittany Downing and Leeanna Bushey. Missing from photo: Michele Abracinskas, Sonia Belkin, and Monica Belkin (COURTESY PHOTO) 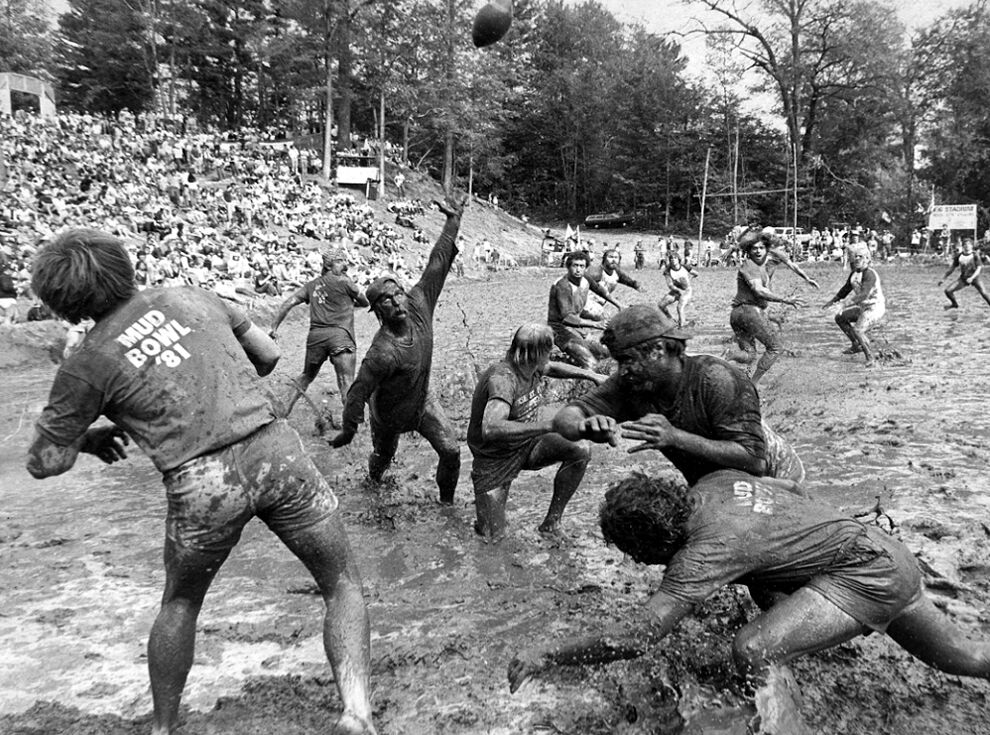 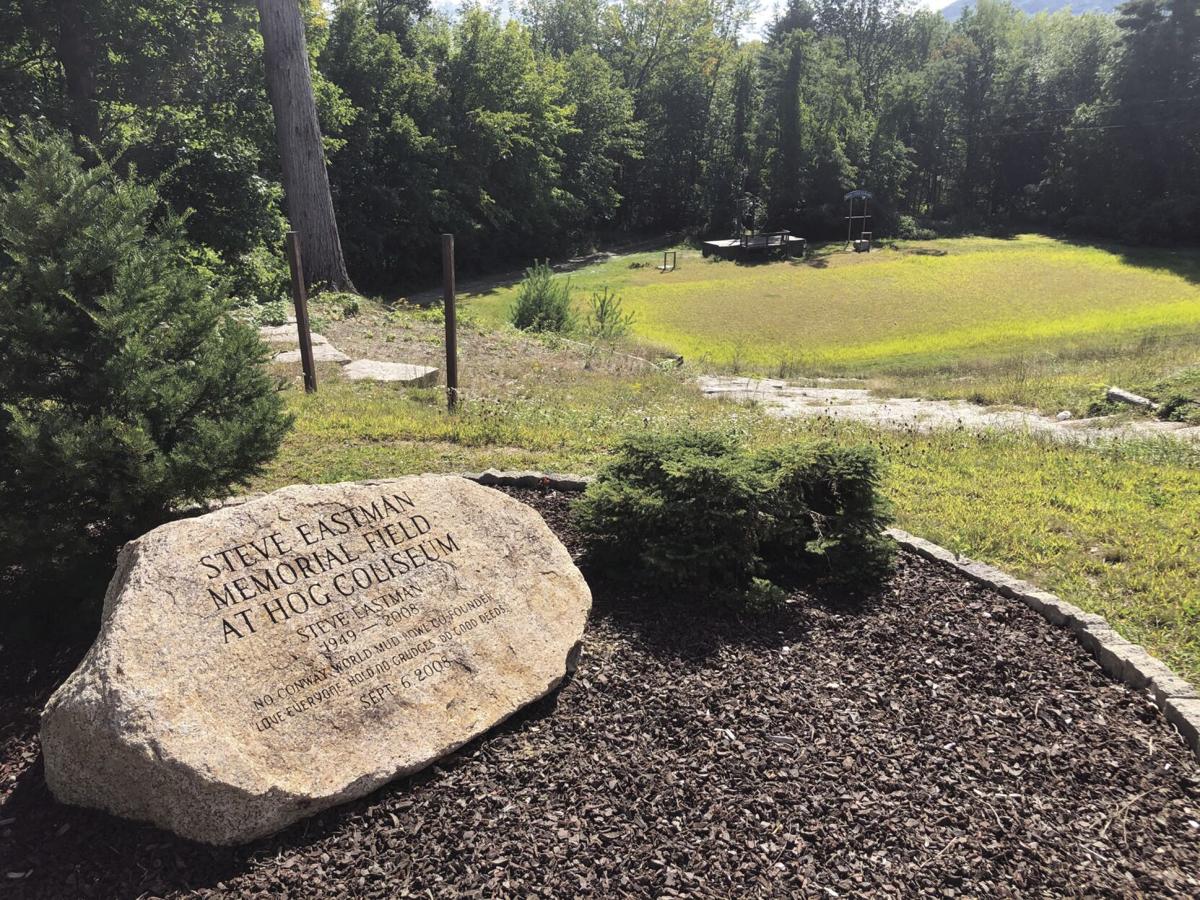 The MWV Mudbassadors gave a big shout-out to Mud Bowl fans this week, noting they miss them but will see everyone hopefully at the 2021 Mud Bowl. Shown above (from left) are Renee Ricker, Andrea Martin, Darlene Noyes, Ruth Barone, Brittany Downing and Leeanna Bushey. Missing from photo: Michele Abracinskas, Sonia Belkin, and Monica Belkin (COURTESY PHOTO)

SO, FROM FLYING CANOE protests above Cathedral Ledge, the primary elections and the start of school Tuesday, life was interesting to cover this week.

But weekend life is definitely not back to normal as for the first time in 45 years, there is no "joy in Mudville."

That’s right — no mud football. No Tournament of Mud Parade or zany skits put on by teams.

There’s an eerie feeling to it all, as though this were some movie, like the plot for “Footloose,” when no one was allowed to dance — well, now, no one’s allowed to play in the mud due to a correct decision by the directors of the North Conway Community Center voting this spring not to go forward with this year’s World Championships of Mud Football due to COVID-19 concerns.

It was the right move. How could you ensure safe social distancing at Hog Coliseum for spectators, let alone for the players?

Still, as what should have been Mud Bowl Weekend came about Friday and into today and tomorrow, it was downright weird — at least for those of us who have helped nurture the fundraising event first held locally in Katie Aguerre’s cornfield near today’s Schartner Farms in 1976.

Games were held at a variety of venues after that, including in Doc Hussey’s field along Route 113 in Conway along the Saco River, and at the base of Cranmore Mountain in 1979 and for the Mud Bowl Olympics in 1980, the latter of which was filmed for WBZ-TV and by “Real People.”

After that world fame, Mud Bowl leaders worked with the North Conway Community Center to build Hog Coliseum out behind the NCCC, transforming it into the jewel of a facility that we know it as today.

And now, the mud momentum comes to a pause.

For this journalist, who went to my first Mud Bowl in 1979, it’s especially odd as I have covered nearly every Mud Bowl since. After all, my late brother Steve “Ear Lobe” Eastman co-founded the MWV Hogs in 1975 with then Alpine “Fun Spot of the North Country” Lounge owner Richard DeAngelis in 1975.

Steve had been transferred to the valley from Sugarloaf, where he had served as editor for Ed Rogers’ paper, the Sugarloaf Irregular. Ed sold his paper, and the new owners had opened a MWV Irregular and sent Steve down here to run it in 1974.

Sugarloaf had started Mud Bowl in 1972, after some University of Maine Orono fraternity brothers moved there to be ski bums. They had started mud football back at the UMaine campus when, during a rainy weekend, alumni and frat brothers challenged each other to a game in a muddy field.

So, when Steve got transferred to North Conway, his old Sugarloaf friends called him to see if he could get a team to play against other ski resort teams in Sugarloaf’s Mud Bowl. Steve talked to DeAngelis, and it didn’t take long to coerce Alpine patrons to form a team — the now 11-time champion MWV Hogs — to head north for the nearly three-hour trip to Sugarloaf.

The goal from the start was to not only have fun, which made for good copy both in the Irregular and The Mountain Ear when Steve co-founded that newspaper in 1976 with business partner Jane Golden-Reilly, but also to extend the summer season and raise some money for local causes.

The Tournament of Mud Parade added to the event’s colorful zest when it was instituted in 1981, the same year as Hog Coliseum was built.

In 1997, the format was expanded, and new committee members came on board, but the goals remained the same. Adding to Mud Bowl two years ago was the addition of women’s teams, many of whom are Crossfit athletes.

Highlights over the years are many, including seeing the New Hampshire Lawnchair Brigade, marching in the parade and then in the mud under the chair-flapping direction of Larry Frates of Laconia.

I also recall photographing the Miller Lite game ball being delivered at midfield to start the first game at the then new Hog Coliseum in 1981 — out of the skies, via parachute.

Or the Hogs entering Hog Coliseum via overhead cable in 1985, with one Hog player — the white-bearded Rick Purneau — getting stuck suspended 10 feet off the ground, and whispering above the roar of the crowd to his teammates, “Hey, guys? Hey, guys! Help me!!!”

And then there was the great interview WBZ-TV’s Bob Lobel did in 1981 in the deep ooze of the end zone with parade participant Jimmy Dean, a 600-pound Maine fair circuit blue ribbon porcine winner. Years later, I watched a show on Bob’s sports TV reporting retirement in which he showed a clip of him holding  a microphone up to the muddy, snorting pig's snout, saying, “Jimmy Dean was my best interview ever!”

That’s not to say that Mud Bowl is everyone’s cup of tea, er, mud.

I always love it when someone tells me with a bit of an upturned nose, “Oh, Mud Bowl? Hmmmm … you know, I have never been to it.”

To that, I always (somewhat diplomatically) respond, “Oh really? Why not? Do you have something against raising money for local charities — nearly $1 million over the years?”

I also add: “Gee. We used to have a thing called the Volvo International Tennis Tournament, and that left and went to Vermont and then on to Connecticut. And then we had the Attitash Equine Festival, but that stopped. But Mud Bowl? It’s still here.”

I spoke with Monica Belkin, NCCC secretary and head of the MWV Mudbassadors, who with her husband, Mud Bowl announcer Jon Belkin, helps carry on the Mud Bowl spirit.

Monica said to show continuity the mud will be tilled at Steve Eastman Memorial Field at Hog Coliseum and that she and her fellow Mudbassadors want everyone to know that while there may not be a Mud Bowl this year, “There definitely will be one next year!”

We all hope so, pending a successful vaccine, right? In the meantime, to echo that time-honored phrase first uttered by former Hogs veteran Paul “Duck” Skolfield, “Hey, Mud Bowl!”

IN OTHER NEWS, kudos to all local and state election officials for their expertise in making this week’s primary voting go so smoothly, as well as to SAU 9 and all local school officials for making the first days back in school a success.

Similarly, nice job to all who participated in Friday’s 19th anniversary ceremonies for 9/11 in North Conway’s Schouler Park.

STAY SAFE and be sure to contribute to the virtual online Jen's Friend Climb Against Cancer, now through Sept. 19 at jensfriends.org. And, go Gronk and Brady and ... go, Tampa Bay? Like we said at the start — the world is strange these days, isn't it?

MUSIC: See you at the Wildcat Tavern for the Cold River Mini Radio Show concerts (Micromasse Sept. 12 and Duke Robillard Sept. 19) and don't miss the live music at Tuckerman Brewing on Fridays through Sundays; the Red Parka Friday and Saturdays; and the Denmark Arts Center's shows at the Bridgton Drive Inn the next few Sundays, with Bruce Marshall playing Sept. 20.