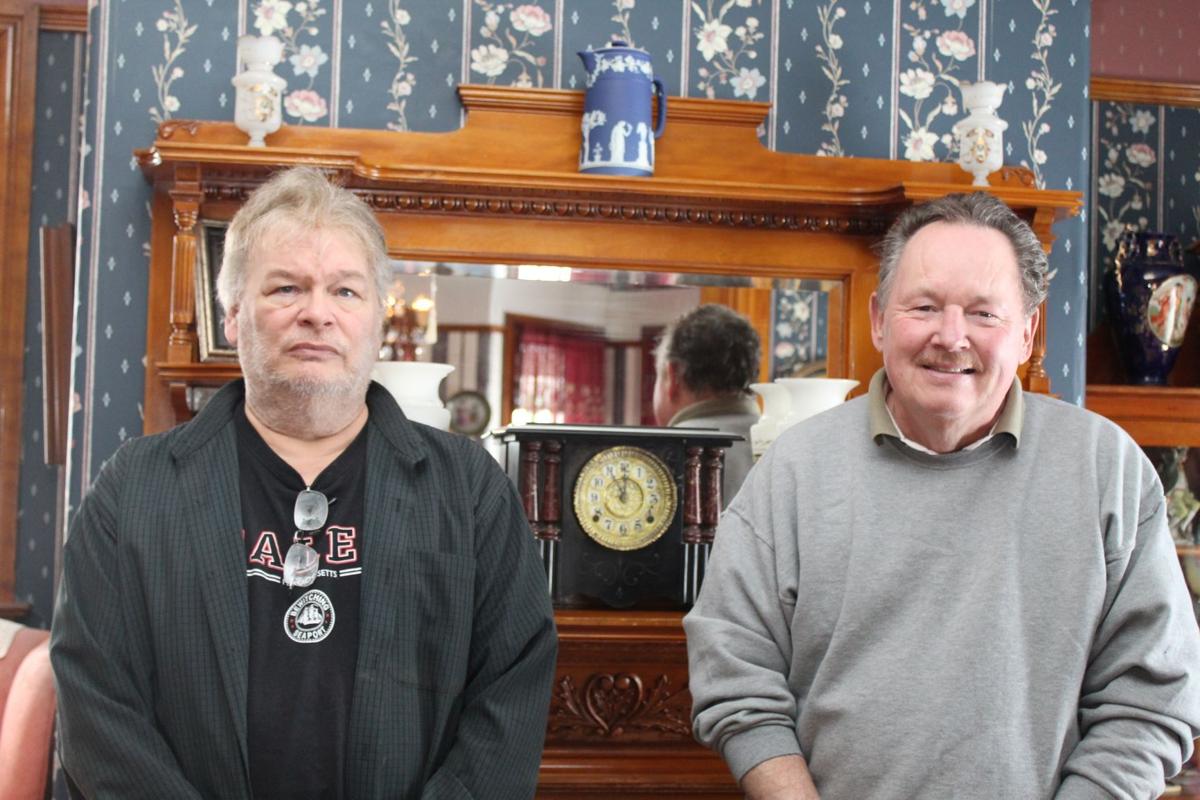 Bob Marcy and Paul Stream own the Libby house Bed and Breakfast and Hostel. The old mansion, now a bed and breakfast, is the subject of an upcoming episode of the Travel Channel show "Kindred Spirits." (PAUL ROBITAILLE PHOTO) 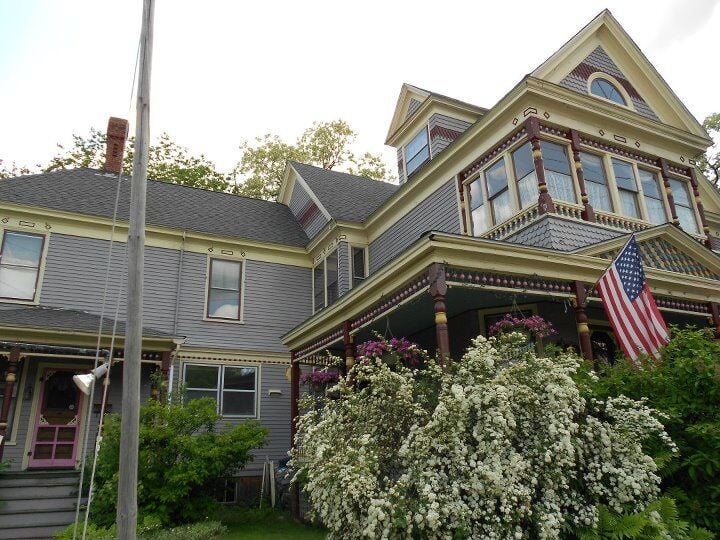 The Libby House Inn was originally the family home of Charles Libby, built in 1888. (COURTESY PHOTO) 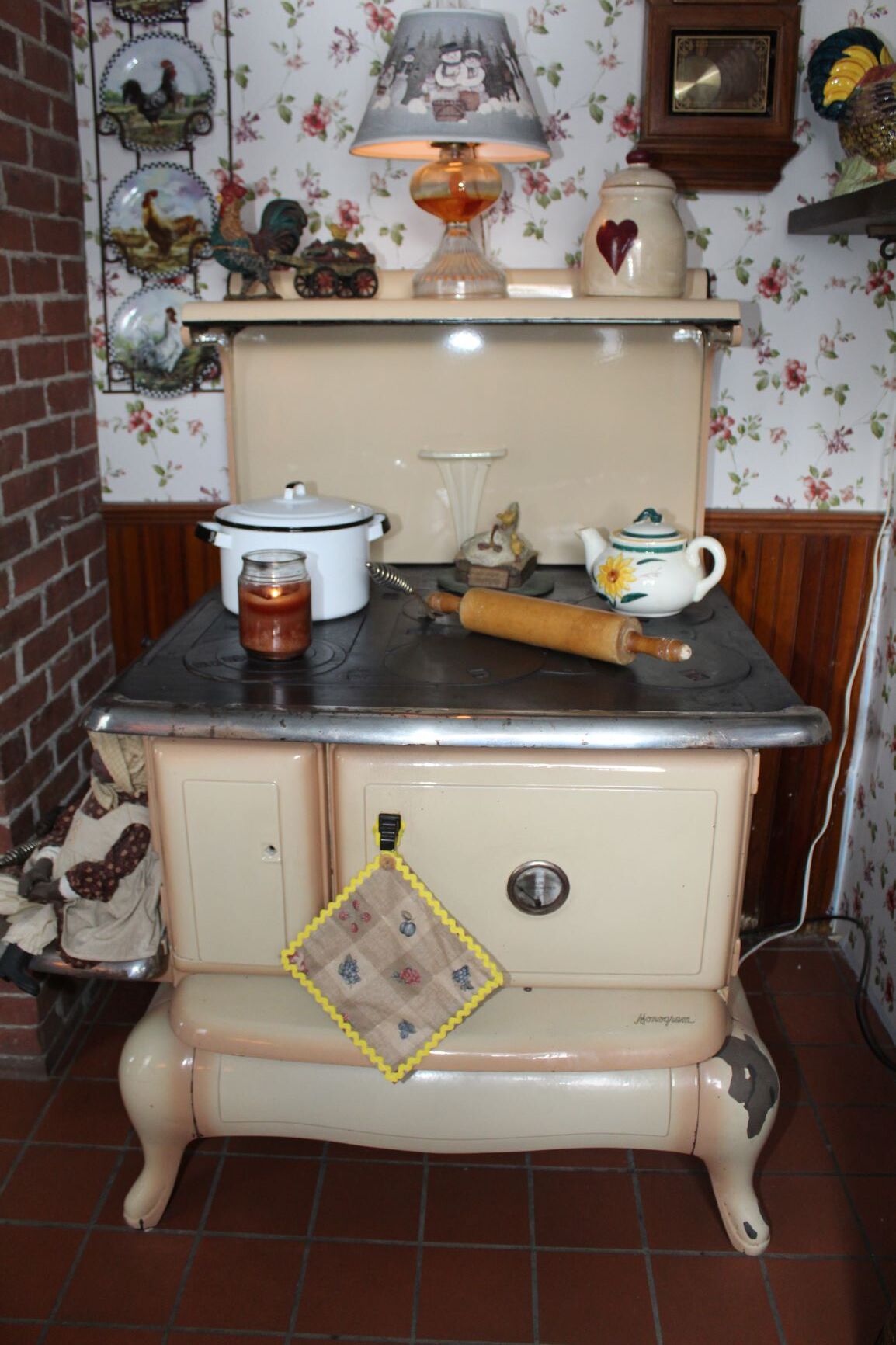 The old Libby house cook stove is among the many original items that can be found in the inn. (PAUL ROBITAILLE PHOTO) 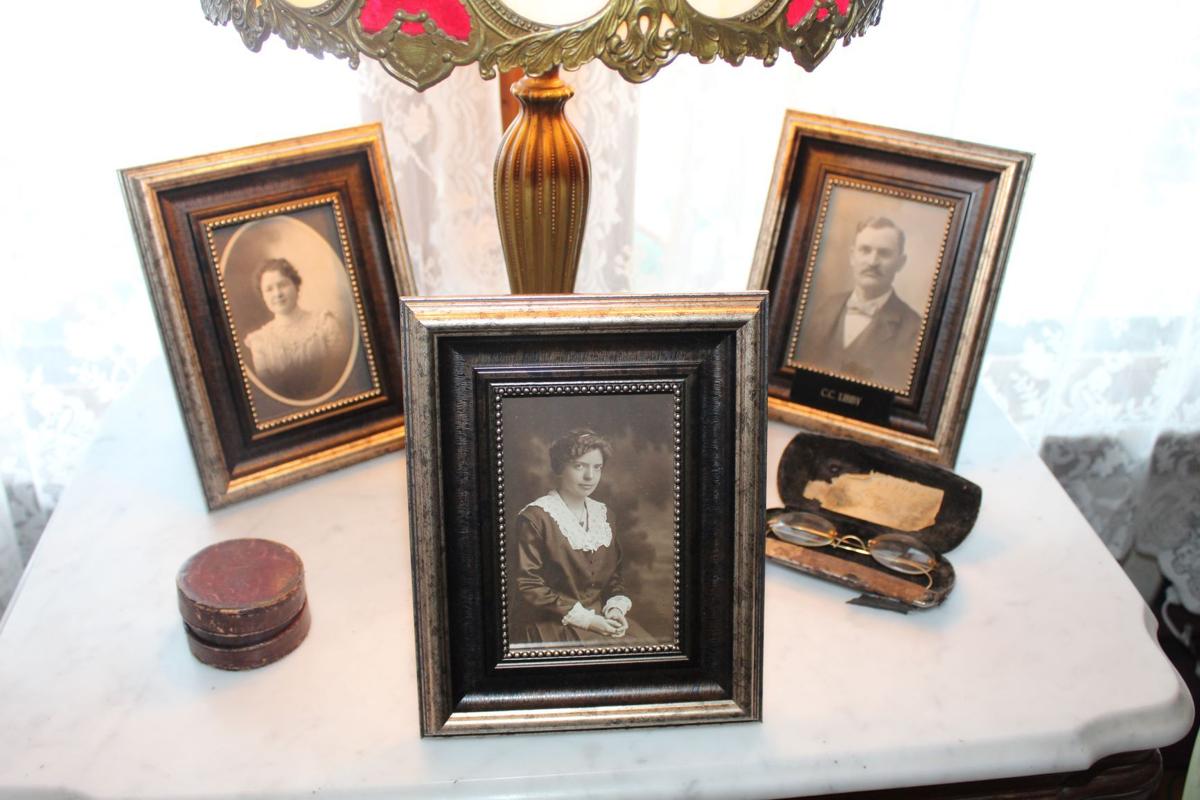 Pictures of Charles Libby his wife and their daughter Joyce Ray along with Charles’ drinking cup and spectacles sit on an antique table in the Libby House Inn in Gorham. A Travel Chan- nel show to air Jan. 30 will look at whether the inn is haunted. (PAUL ROBITAILLE PHOTO) 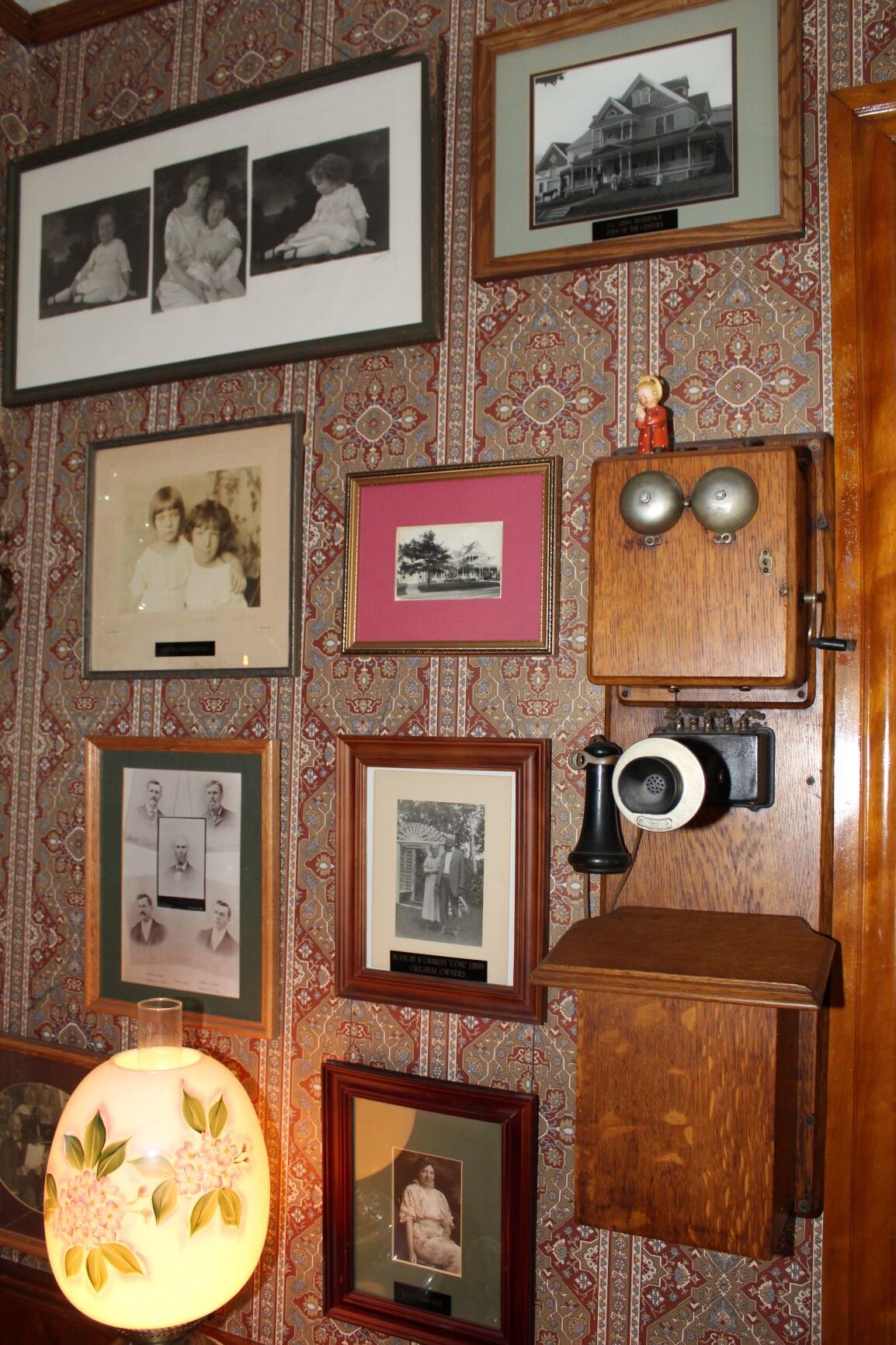 Bob Marcy and Paul Stream own the Libby house Bed and Breakfast and Hostel. The old mansion, now a bed and breakfast, is the subject of an upcoming episode of the Travel Channel show "Kindred Spirits." (PAUL ROBITAILLE PHOTO)

The Libby House Inn was originally the family home of Charles Libby, built in 1888. (COURTESY PHOTO)

The old Libby house cook stove is among the many original items that can be found in the inn. (PAUL ROBITAILLE PHOTO)

Pictures of Charles Libby his wife and their daughter Joyce Ray along with Charles’ drinking cup and spectacles sit on an antique table in the Libby House Inn in Gorham. A Travel Chan- nel show to air Jan. 30 will look at whether the inn is haunted. (PAUL ROBITAILLE PHOTO)

Is the Libby House Inn in Gorham haunted?

The current owners Bob Marcey and his cousin Paul Stream say the question will be answered on the Travel Channel TV show “Kindred Spirits,” to be aired Saturday, Jan. 30, at 10 p.m.

The “Kindred Spirits” website describes the episode: “Amy Bruni and Adam Berry check themselves into the historic Libby House in Gorham New Hampshire to investigate a haunting so vivid the ghostly guests in Victorian dress are mistaken for the living. With help from psychic medium Chip Coffey, they make a startling discovery that uncovers a very disturbing presence.”

Stream said that during the taping of the show there was an incident that validated everything.

“They did find out what was here when they did a taping on the third floor. I cannot tell you what it is, but it is explained in the episode,” he said.

If people want to know what the Kindred Spirits crew found, stream said, they will have to watch the Travel Channel show.

Marcey and Stream previously ran a family business in Maryland which they sold after 32 years. Eventually Marcy ran a bed and breakfast in Salem, Mass., for 11 years.

Friends of his told him about the Libby House and he came up and looked at it and thought it would be a perfect fit for him.

He contacted then owner George “Doc” Reagan and began conversations about buying the house. Marcey also called Stream, thinking the hostel portion of the business, which is run out of the barn, would be a good fit for his cousin.

Stream said he has wanted to run a hostel since 1974 when he hiked the Appalachian Trail.

Stream said that this year the hostel has done well.

“We have put in beds rather than make people sleep on the floor in the barn. A lot of the hikers like to be in town where they can walk to everything,” he said. “We have had all kinds of different people from all walks of life, company CEO’s, doctors, lawyers, you can’t tell them apart from anyone else because the men all have beards.

“A lot of people look down on the hikers but in reality, some of them are highly educated and wealthy people. You cannot tell until you talk with them. “

It took them a couple of years to buy the Libby House from “Doc” Reagan.

Marcy said a developer was interested in buying the Libby House, but Reagan wanted to sell it as a B&B. The cousins came to Gorham and bought the house in September 2014, and Reagan died the following June.

When they finally purchased the property, the cousins learned that some of the original Libby furnishings had stayed in the house.

“That chair, that sofa and another chair in the dining room along with the sideboard all belonged to the Libby family. In the foyer, all the pictures are of the Libby family.” said Stream. “Mandy Bradford has been a great help to us in identifying Libby pieces and stories.”

Mandy is the granddaughter of Leo and Joyce Ray.

Joyce Ray was a daughter of Charles Libby, who built the house in 1888. Joyce Ray died in the house at her dining room table.

“Mandy has been here many times. She has given us pictures and the two wagon wheels in the barn that were once part of the Libby carriage. “Most of the decor in the house is from three generations of Marcy’s families. Neville Hayes donated some of Charles Libby’s personal items such as his eyeglasses, drinking cup and other items to be displayed in the house. Charles Libby built the house in 1888 as a smaller model of his father’s house, which was once on the current McDonalds’ site. Stream said that the ghostly activities seemed to start soon after they arrived.

He said he called Reagan and asked if he had seen anything strange going on at the B&B and he said he had not. But the two owners recalled a couple of strange happenings during their tenure.

Stream said one came the first month or so after the pair were here.

“I heard a conversation on the third floor, so I went to the bottom of the stairs to listen there was no one else in the building. It was two men talking; it was chatter, it was real. I went up the stairs. The conversation stopped briefly. This is what I heard: ‘Mr. Charles I am not going to take that load of lumber down there with one horse. One horse cannot take that load of lumber.’”

“There was a pause and then I assume it was Mr. Charles replying, ‘Well then go down to the stable and get Charley (a horse) and hook him up’ and he named the wagon, but I can’t remember the name of the wagon. Then he says, “They are both big workhorses and they can take the load over to the rail.’ Then the conversation ended. I went up to the landing and pushed the door open quick and there was no one there. My mind is telling me this cannot be happening. How am I hearing this? This cannot be,” Stream said. “But I know I heard it.”

“I don’t like to talk about this because people think I am making it up,” he added.

Marcey said more things happened to Stream since about a year after they took over.

“Paul came down with the flu and collapsed in the bathroom. When he fell, his head hit the door jam and broke his neck and (he) almost died. The incidents increased after that accident,” Marcey said.

Stream said he is limited in what he can talk about because they are under a contract with the Travel Channel, but said he could talk about one that happened after the film crew left.

During the last day the para-normal group was here some of the hikers were questioning Stream about what the group had found and Stream said he could not reveal anything.

“That evening the four hikers went to eat in one of the restaurants and I was alone in the barn, no one around and I heard voices, and it was a conversation. I couldn’t make out all the words. It sounded like two men talking and I thought to myself maybe I had two hikers come in. Then the conversation became clearer. The very second, I poked my head over the top of the stairs the conversation just stopped. Like a flip of the switch,” Stream said. No one was there.

Stream said that he did not contact the producers of the show but that they contacted him.

“Because of COVID-19, the Travel Channel could not go out of the country, so they were looking for locations on the East Coast to film, they were looking at Victorian homes. The film crew was in Salem, Mass., and they needed another location, so we said yes. There was a line from some people who had stayed here on their website that called it the haunted Libby house. So that was how they found us,” he said.

Stream said he wanted the Travel Show to see what Gorham had to offer.

“I did not want it all to be about us. I wanted the town featured also. So, we called the town manger Denise Vallee to open the museum and Tim Sappington came down and opened it up for the film crew.