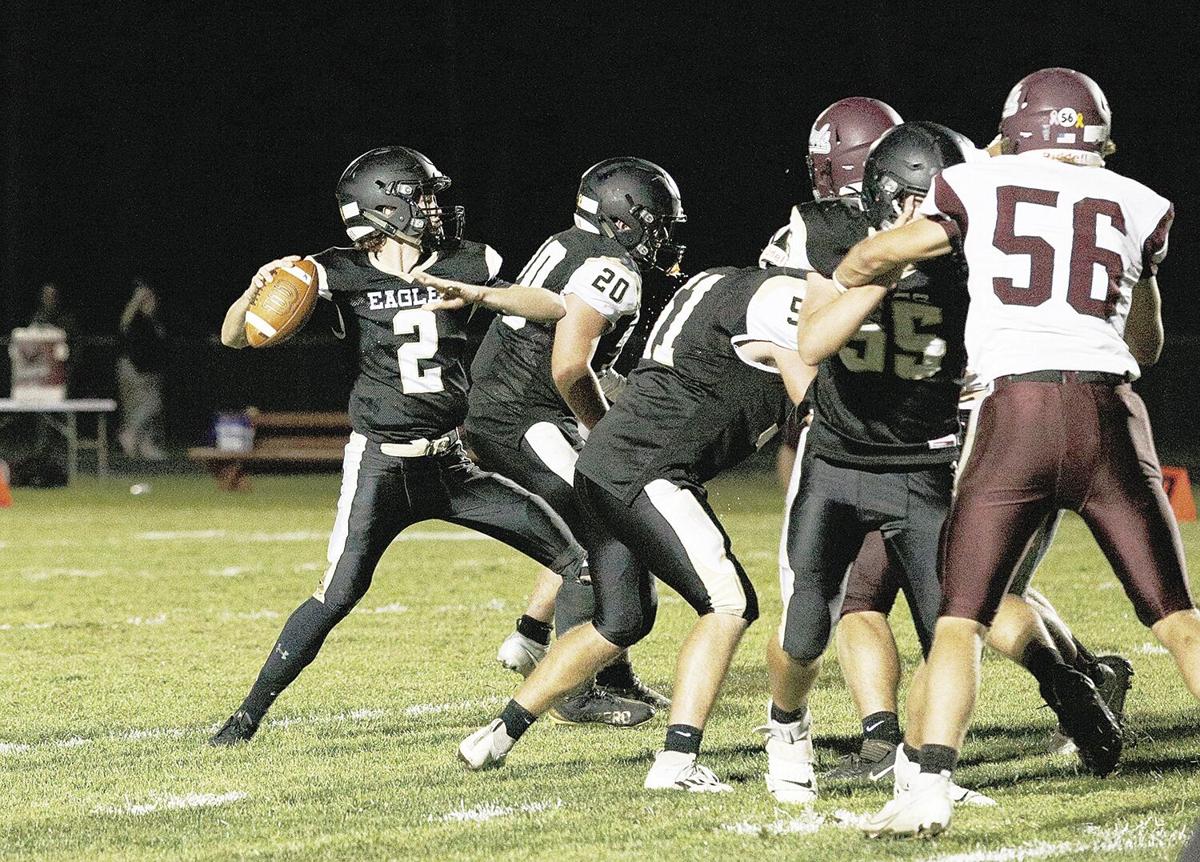 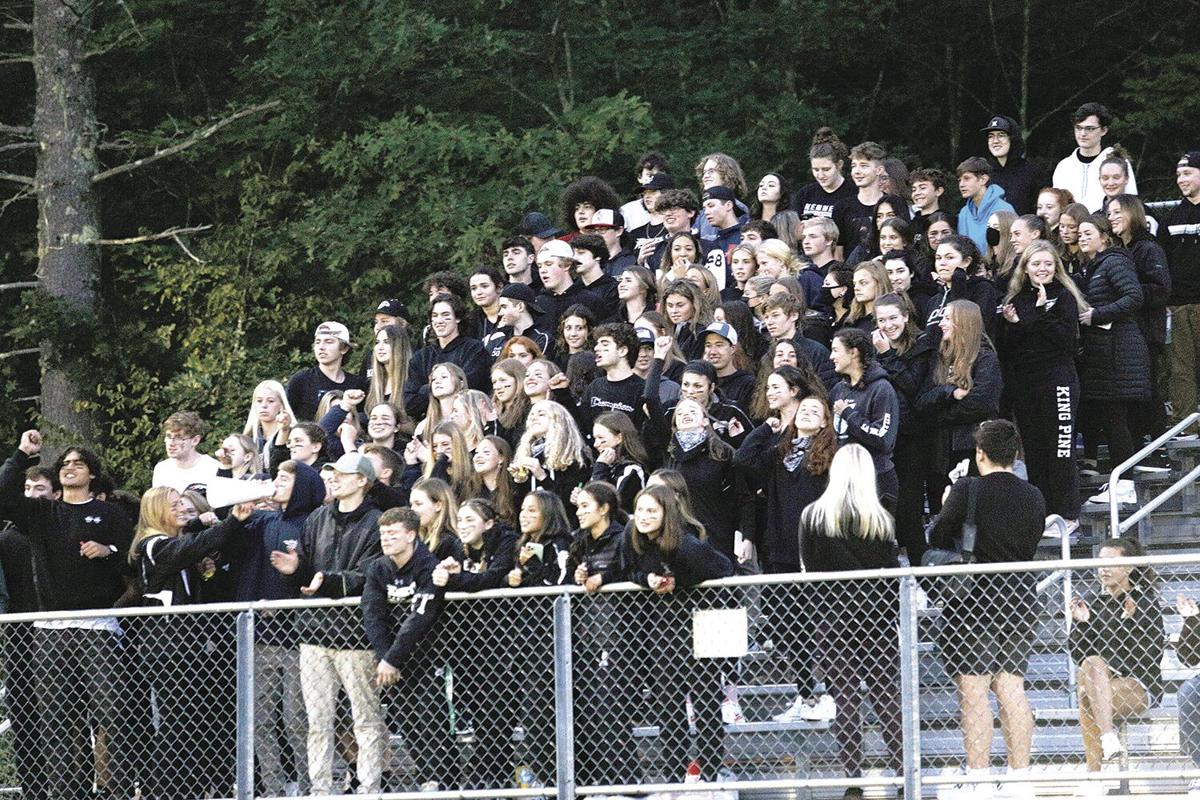 Students cheer on the team at Kennett High School's first home football game Friday night against Timberlane. The visiting Owls 41-0 but the KHS fans, in stands for the first time in two years, were upbeat throughout. (RACHEL SHARPLES PHOTO)

Students cheer on the team at Kennett High School's first home football game Friday night against Timberlane. The visiting Owls 41-0 but the KHS fans, in stands for the first time in two years, were upbeat throughout. (RACHEL SHARPLES PHOTO)

CONWAY — Timberlane quickly proved why it is considered a serious title contender in Division II football this season by scoring touchdowns on two of its first four plays on Friday night. Unfortunately, those scores came at Kennett High’s expense and spoiled an otherwise fun evening at Gary Millen Stadium. The Owls left town with a 41-0 win.

Friday was Senior Night for the Eagles and also marked the first time in two seasons that students were able to attend a home game due to the pandemic.

Timberlane improved to 2-0 on the young season with the win, while Kennett slipped to 0-2 in Division II, and is currently the lone team in the division yet to score a point. The Eagles are blacked 37-0 in Amherst against Souhegan (2-0) on Sept. 3.

The Owls, who shut out St. Thomas 43-0 in Dover on Sept. 3, have outscored their opponents 84-0 after two road games.

Kennett Coach Vaughn Beckwith has one of the younger teams in the division when it comes to varsity experience with just five players returning this fall who saw significant playing time last fall. There are 55 boys out for the team this fall including a record 23 freshmen along with 15 juniors, eight seniors and seven sophomores.

“Sean Carrier played well, had several tackles that saved a TD where he ran down the ball carrier,” Beckwith said of players who had solid games for the Eagles, adding “Kyle Stearns had an interception.”

Before kickoff, the Eagles held Senior Night to recognize the  — and their families for their commitment and dedication to the program.

“We decided to take a page out of last year’s playbook and do Senior Night at the first home game,” Beckwith said.

Kennett opened the game with good field position after Theo Walcott had a 23-yard kickoff return to the KHS 33. Quarterback Camden Bailey connected on a quick 6-yard pass to his younger brother Devan. After a loss of two yards on a run, Evan Koroski had a 4-yard carry, but the Eagles were forced to punt. Sam Seavey had a strong night in the punting department.

The boys from Plaistow got the ball on their own 38-yard line. After talented tailback Dominic Pallaria had back-to-back runs of 13 and 10 yards to reach the KHS 39, junior running back Dan Post went 39 yards up the middle, cut to his right and found the end zone untouched. Fellow junior Harrison Bloom tacked on the extra point putting the Owls up 7-0 with 9:33 left in the opening quarter.

Kennett’s next possession began at its own 18. The Eagles were able to run for a first down — one of just three through the first three quarters — but ended up having to punt after reaching the 30.

The Owls got the ball on their own 35, and on the next play, Pallaria broke two tackles and was off to the races for a 65-yard TD run with 5:21 left in the quarter. Bloom toed the extra point for a 14-0 lead.

The Eagles were able to pick up another first down on their next possession with Bailey finding his tight-end Robitaille, who carried three defenders for a 10-yard gain to the KHS 46. After back-to-back running plays each lost two yards and an incomplete pass, the Eagles were forced to punt.

On their own 24, the Owls quickly picked up 56 yards on a pass from Dominic Coppeta to Ethan Stewart. Only a fine effort by Carrier prevented the TD. Timberlane extended the lead to 17-0 on a 33-yard field goal by Bloom with 30 seconds left in the first quarter.

The Kennett defense stopped the Owls on their next possession. Koroski tackled Post for an 8-yard loss and Isaiah Mojica sacked Coppeta for a 2-yard loss.

The KHS D was equally impressive the next time Timberlane got the football. Holland and Treason Spurlock combined on a quarterback sack, and on the next play, Stearns made a nice read and intercepted a Coppeta pass at the Owls’ 21.

The Eagles had their deepest drive of the night with a Koroski 3-yard run followed by a 9-yard pass to Devan Bailey to get the ball inside the 10. The drive stalled at the 7-yard line on a fourth-down incomplete pass.

The Owls then went 93 yards on 11 plays with Coppeta capping the drive with a 10-yard keeper around the left end for a score. with 22 seconds left in the first half. The PAT was good.

Timberlane led 24-0 at the half and extended the lead to 31-0 on another short Coppeta TD run with 8:35 left in the third period.

Bloom added a 32-yard field goal with 1:48 left in the quarter. The contest went to running time in the fourth when the Owls found the end zone again.

The Saints broke into the win column last Friday with a 46-7 road win over Sanborn (0-2) in Kingston.