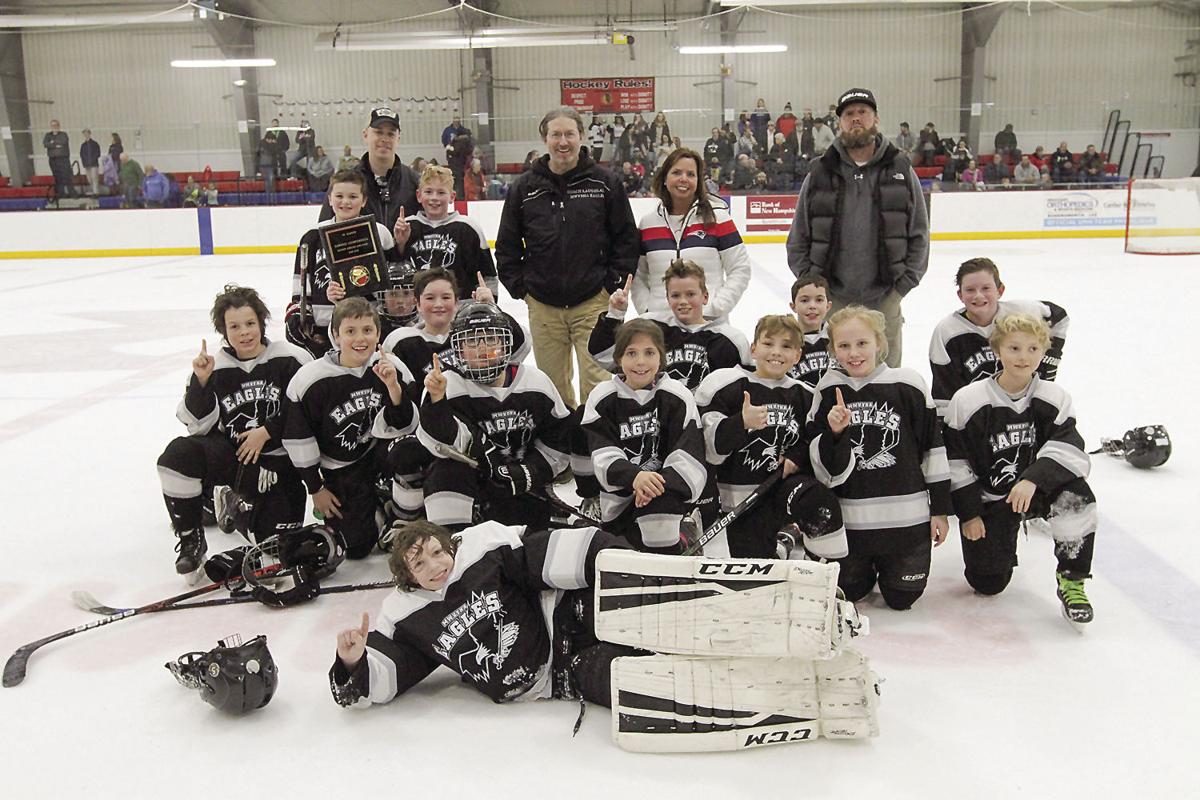 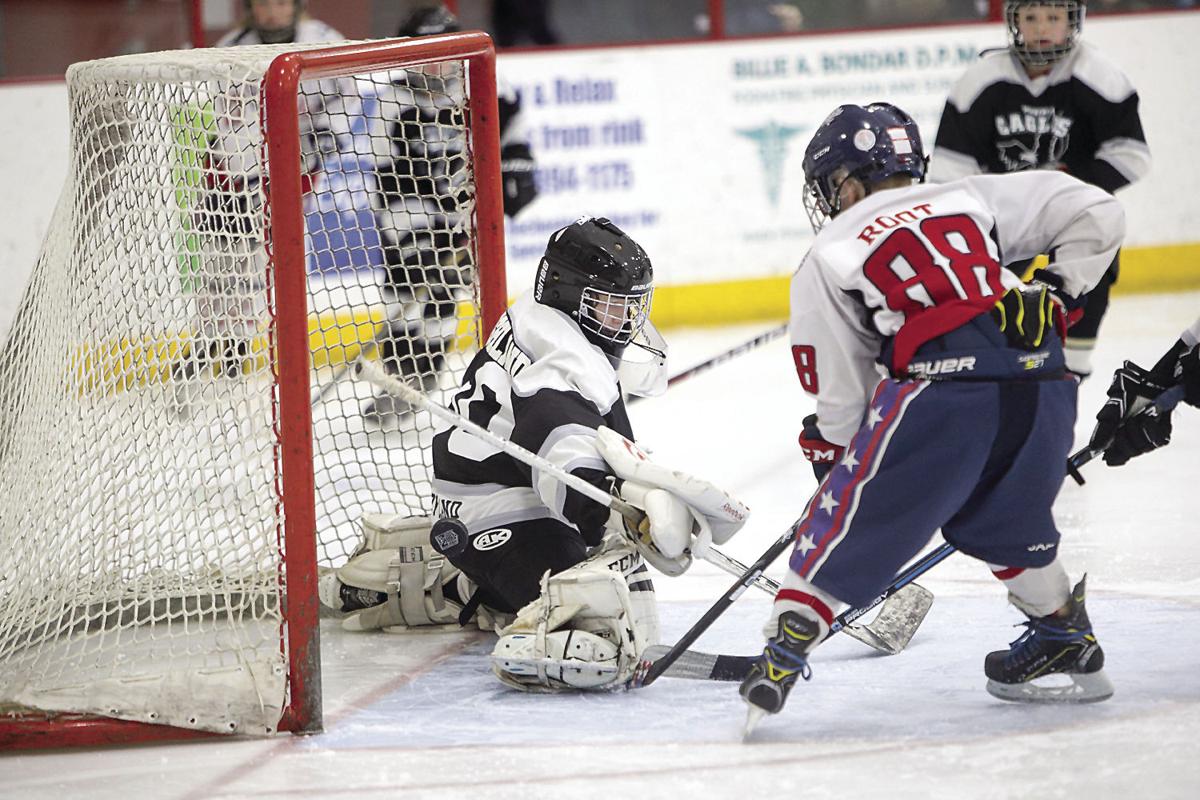 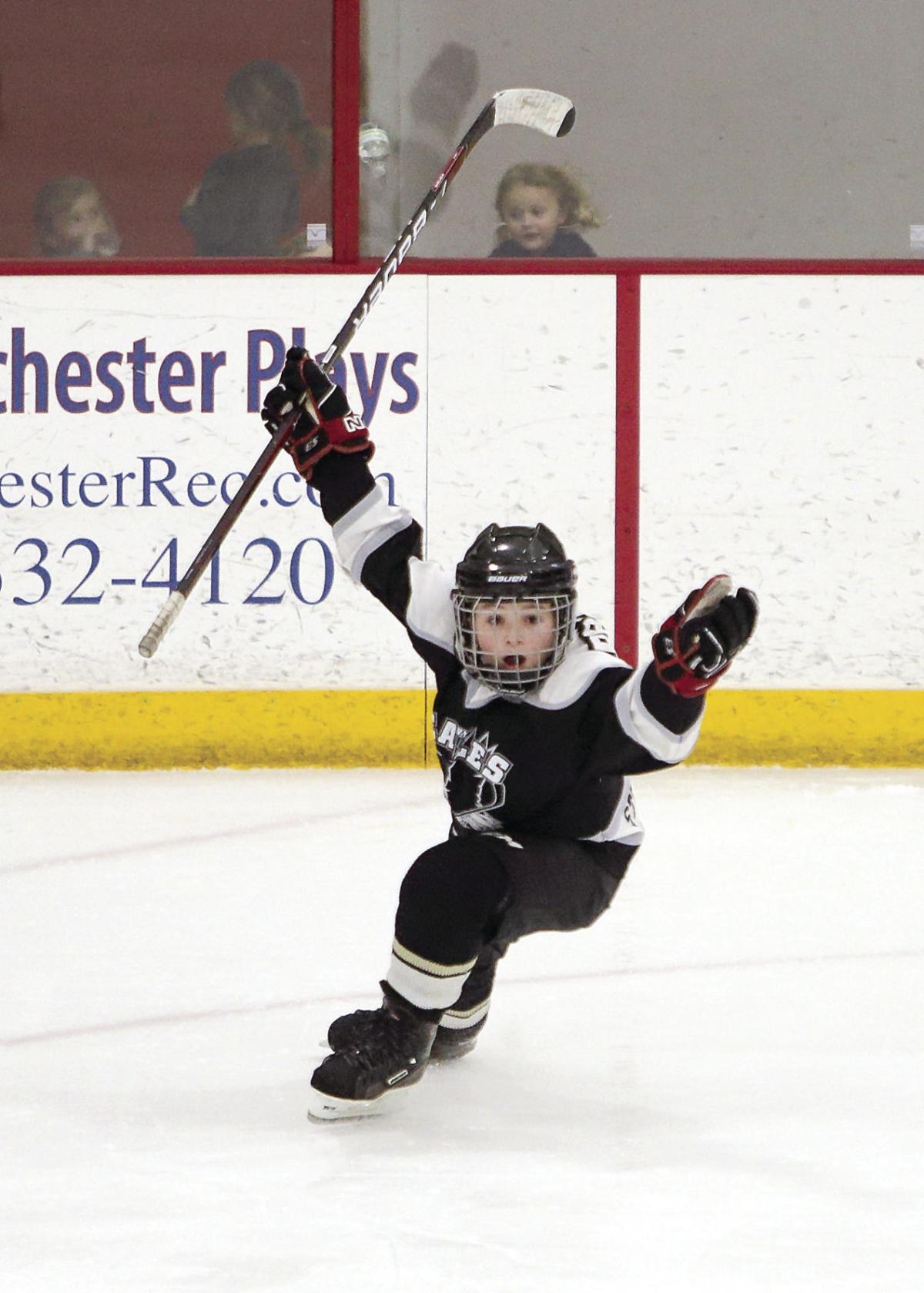 Beckham Brown celebrates after the lighting the lamp with a goal. (KEVIN MURPHY PHOTO)

Beckham Brown celebrates after the lighting the lamp with a goal. (KEVIN MURPHY PHOTO)

The Mount Washington Valley Youth Hockey Association U10 Squirts finished their season with an outstanding performance in winning the annual Seacoast League Tournament. Fortunately, the season wrapped up just as the COVID-19 outbreak was having an impact on professional and youth sports.

The Eagles team saw tremendous growth on an individual level, coming together as a team during regular season play. The U10 level emphasizes skill development for the 8- to 10-year-old skaters. The 16-member squad with five part-time goalies and players filling different roles during game and practice play, had lots of opportunities to develop their skating, puck handling and game play, as well as their chemistry and creativity in playmaking.

All their hard work at practices came together, as they played their best games of the season during the tournament, bringing home championship hardware to the Ham Ice Arena, and earning the respect of their opponents, on-ice officials and fans.

The Eagles opened the tournament with a morning game against Back Bay. The Eagles had faced Back Bay during regular season play and went into the game with confidence that it was a good even matchup.

Grady Pierce kicked things off in the first period with an unassisted goal, followed by a snipe from Caleb Aker assisted by Seraphina Carbonaro. Back Bay responded with its only goal, less than a minute later.

The Eagles dominated the rest of the game with goals from Griffin Howland, assisted by Aker, Beckham Brown from Howland, Cooper Coleman unassisted, and Blake Royer slamming one home from Howland.

A 6-1 win in the morning gave the team a needed shot of confidence for the afternoon, where it faced Concord.

The Concord Capitals 10U Selects had been in a higher tier all season, and the Eagles had never faced them, but the Caps had some strong victories over teams the Eagles had lost to earlier in the season. In playoffs though, anything can happen, and given their performance in the morning, the Eagles showed up to play as a team and appeared ready to take the ice against an opponent who, on paper, seemed unfavorably mismatched.

Concord got the party started with two goals in the first period, and although the Eagles had shots on net, their first period seemed like they hadn’t quite shown up yet. Concord scored again in the midpoint of the second period and again with four minutes left, leaving the Eagles in a four-goal deficit. With a 1:29 left in the second period, Griffin Howland with an assist from Blake Norcross found the back of the net.

During the brief intermission between periods, there was a palpable shift in the team’s energy, as its play intensified, and the MWV players realized they were outplaying their opponent. At 4:12 into the third period, Norcross connected with Howland again, then two minutes later Aker put one in off a pass from Logan McHenry, and the tide had shifted, unfortunately, though, the clock was running down.

However, a Concord player received a slashing penalty at with 54 seconds to play in regulation time, placing the face-off in the Concord end. The MWV coaches called a timeout and pulled goalie Tucker Laughland, moved Griffin Howland to take the draw, and with six Eagles facing four Capitals, the path to the championship game was set. Seventeen seconds from the buzzer Howland buried the puck, putting the game into three-on-three overtime for five minutes.

The Eagles and Capitols went back and forth scoreless for five minutes, playing three-on-three, with clutch saves made at each end of the ice. At the end of five minutes, the game moved to a shootout.

Five shooters were selected and goalie Tucker Laughland shouldered the pressure against the Concord shooters with the best chance to put the Eagles away. The score was still even after the first shootout round, neither team scoring more than the other.

Round two of the shootout started, and the Eagles second skater, Caleb Aker slid one past the Concord goalie. Laughland turned aside the next shot from the Concord player, and Eagles were going to the championship after a barnburner semifinal.

Concord and Back Bay faced off in the last semifinals in the morning while the Eagles rested for their final test of the season. Sunday evening, the Rochester arena was buzzing, with the MWV Pee Wee and Bantam teams also in final games in tournaments that day, and the parents and fans were out in full force.

The Eagles took the ice knowing they were facing a strong and motivated Concord team and their last game would not be an easy one. Concord put goals on the board a couple of minutes into the first period. Griffin Howland gave them an unassisted answer with five minutes left in the period.

Concord scored again in the second period, during an increasingly gritty matchup. The Eagles were stepping up and making key plays defensively, battling along the boards and in the corners, connecting with passes, playing with discipline against Concord’s physical play and cheering each other on.

Going into the third period Logan McHenry fed Beckham Brown who ripped a shot from the top of the right circle putting the game at 2-2 tie with eight minutes left to play. Two Caps penalties helped get some insurance while the clock ran down, and the Eagles held on to the tie against the Concord onslaught. In a harrowing and exciting remainder of the game, both teams played their hearts out. Finally, 1:50 left in regulation, Norcross and Howland connected again, sealing the deal with three goals, and the MWV U10 Eagles became tournament champions with the 3-2 win.

“What made this such an important win for us was contributions from every member of the team,” Head Coach Darron Laughland shared. “Good opportunities start with a puck turnover, a play being broken up, one good pass, a puck battle along the boards. All the kids did the little things well, supporting each other, and with solid defense and strong goaltending, the team had the confidence to make plays and create scoring chances for us.”

He added: “I appreciate all their hard work and the time commitment and work of the coaches, and parents who helped out. Thanks to coaches Tanya Carbonaro, Evan Carrington, Nick Royer and Chuck Seavey. I also want to recognize Brady Shaw and Bryson Wrobleski from the high school team who made it to a ton of practices to work with the goalies and our players. They have been awesome role models and had a big hand in the player’s growth and success.”