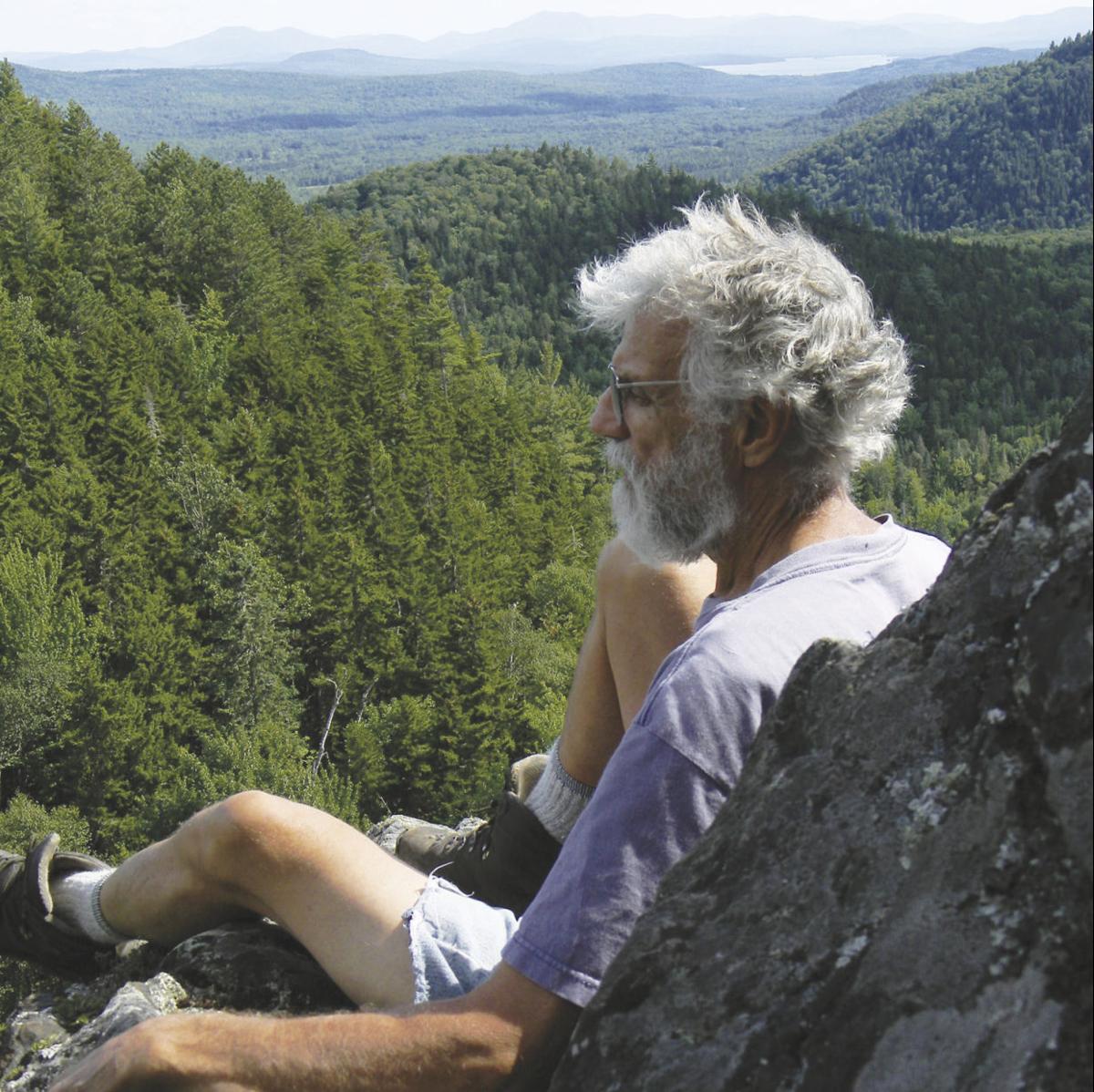 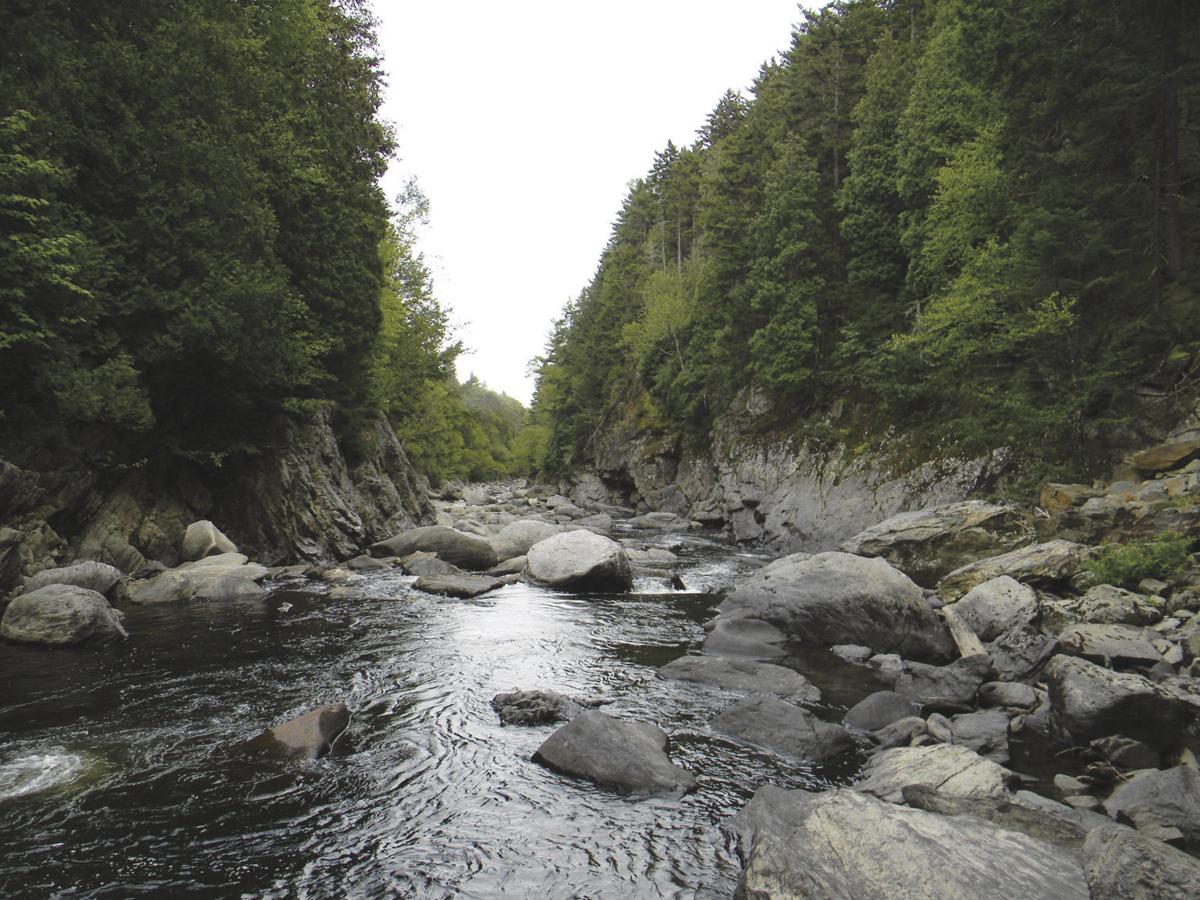 Late July is a good time to go North. Recently, my visiting friend, Carl, and I went up to the Second College Grant north of Errol. We did the moderate yet exciting hike up the Diamond Peaks (2,040 feet).

After the hike, we separated. He did some mountain biking on the well-maintained dirt roads in the Grant, and I bushwhacked down the 1-mile Diamond Gorge, located on the Dead Diamond River. Later, we met up at our car, located outside the gate.

The 27,000-acre Second College Grant, given to Dartmouth College by the state in 1807, is a gem of wild land. Today, it is a valuable recreational resource, a unique place for student and faculty research, and the site of some careful logging to pay for its operating expenses.

Such a place could be easily “loved to death” by too many recreationists. A distinct advantage the landscape has there is that the two access roads are gated, and keys are only available to those in the “Dartmouth family,” including alumni.

However, in the southeast corner of the grant is land designated as the John Sloan Dickey Natural Area, named for a past Dartmouth president, and dedicated in 1976. Within that area are the Diamond Peaks, the confluence of the two rivers, and the gorge.

Non-key holders only need park outside the nearby gate and walk in. The 2.2-mile dirt road walk from the gate up to the trailhead for the 1.1-mile Diamond Peaks Trail is scenic and well worth doing in itself.

Carl and I live in different paradigms. He is a research scientist, with a lab in the Bronx. His days often end after midnight. I get up with the sun, and settle down when it sets. Hiking on my own, I’m usually back home by late afternoon.

When Carl and I head north for a day in the North Country, leaving Jackson mid to late morning, I know it is going to be a long day, but I don’t mind. It is well-worth it to make this summer pilgrimage and get back late.

North of Berlin, we soon hit the 13 Mile Woods Scenic Area along the Androscoggin River. Just before that, passing Pontook Dam, the view left included a ridge in Dummer with new wind towers.

In Errol, we had to stop at Cote’s, where he bought an outdoor jacket and I bought some fishing essentials. North of Errol on Route 16, we drove 12 miles to the Dead Diamond Road on the left, and drove in a few hundred feet to the pull off on the right just before the gate.

Carl was going to mountain bike in, and meet me at the Diamond Peaks trailhead. So, I started walking in before he was ready.

Just a hundred feet after the gate, a scenic swamp opens up to the left, with mountains behind. An old osprey stick nest is there in a tall dead tree, and this time, the osprey flew up.

I walked past the maintenance cabin called Gate Camp, crossed the bridge over the Dead Diamond — wide and shallow at that point — passed the turnoff for the grass airstrip and climbed up the long uphill road next to the gorge, which I could faintly hear, far below. In spring high water, it is much louder.

Soon, the road leveled out, and I passed the cabin called the Peaks Cabin. There were cars there, and Dartmouth students hanging out on the porch. A few more bends in the road brought me to a road junction with a cabin called the Management Center. The Diamond Peaks Trail started there, across the road. There was no one around.

I settled in a rocker on the porch of the cabin. It was an incredibly peaceful spot. Big cumulous clouds rolled by overhead, above the forest.

“This is what most of New Hampshire used to be about,” I thought to myself.

Carl showed up after walking his bike up the long hill. After he locked his bike to the porch, we started up the Diamond Peaks Trail. I highly recommend this hike. The trail climbs to a ridge and follows it over a couple false summits with great views south out over steep cliffs.

The actual lookout is on a clifftop just beyond the highest summit, and has a panoramic view of the north country, with the Magalloway River winding past spruce bogs below, Lake Umbagog quite a way south and Old Speck on the southern horizon.

We lingered most of an hour. The way back down, past steep lookouts, was just as pleasant as the climb.

Back at the cabin at the tail end of the afternoon, we readied for our separate plans. Carl was going to bike northwest on the Dead Diamond Road as far as he could, then turn around and bike downhill all the way to the car. I was going to walk back past the Peaks Cabin, make my way down to the shore of the Dead Diamond River and bushwhack a mile down Diamond Gorge, and then continue on the road to the car.

I found a wide fisherman’s path to the river, and was soon was making my way down the rocky shore. The water wasn’t high, and I was able to cross from one side to the other. But it was necessary to get my boots wet.

I made my way into the gorge. It was never too narrow or fast for passage, yet often I was up to my middle in the water, with a smooth, steep ledge for the shore. I took my time, careful of slippery rock and secure footing on the bottom.

The water was not crystal clear, but murky and warmer. Although the river flows through healthy forests in the grant, the Dead Diamond flows through miles of clear-cut country in the townships upstream, and this has hampered its purity and health over the years.

Trout struggle in it, and most have fled to tributaries, and even out into the Magalloway, where there is cooler, more oxygen-rich water. Scientists are studying the trout in the Dead Diamond, and have even implanted radio transmitters in them to track their movements.

I knew I was finally reaching the bottom of the gorge when I saw a couple standing on the shore kissing. When they realized they weren’t alone in Eden, they pulled apart and headed up the path to the road. I reached the pool, and after a quick dip to get the sweat off, followed them.

Later on, Carl reached the car a short while after me. We headed to the Northland Dairy in Berlin for dinner.