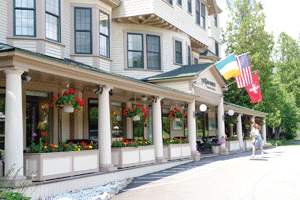 The Wentworth in Jackson is one of the last remaining grand hotels of the White Mountains. (JAMIE GEMMITI PHOTO) 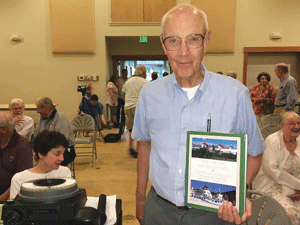 The Wentworth in Jackson is one of the last remaining grand hotels of the White Mountains. (JAMIE GEMMITI PHOTO)

JACKSON — Of the 24 grand hotels that once graced the White Mountains in the 19th and early part of the 20th century, only five remain: the Omni Mount Washington Resort, Mountain View Grand, Eagle Mountain House, Wentworth Resort and the Balsams.

The first four are still open — and if developer Les Otten succeeds in his plans to transform it into a world-class ski and year-round resort, the Balsams will join that select group, pending development plans.

These celebrated structures, present and past, were celebrated in a talk hosted last week at the Whitney Center in Jackson by the Friends of the Jackson Public Library and N.H. Humanities Council.

According to the featured speaker, architectural historian Dr. Bryant F. Tolles Jr., in the late 19th-century and 20th century, the hotels "were a vital, shining symbol of summertime leisure and recreation."

As Tolles related in his July 8 talk to about 80 history enthusiasts, the first White Mountain hotels began as roadside inns or taverns in the 1820s.

Bryant Tolle wrote the book on the grand hotels of the White Mountains. (TOM EASTMAN PHOTO)Early innkeepers included Samuel Thompson of the Kearsarge House in North Conway, as well as the Rosebrook and Crawford family of Crawford Notch, who led early tourists on guided hikes.

"The grand hotels reached their peak from 1885-1910 before slowly but marginally declining," Tolles noted.

At the height of the White Mountain hotel industry, there were as many as 200 hotels, inns and boardinghouses in the region, each of which able to accommodate more than 40 guests. The largest — the Profile House in Franconia Notch — took in roughly 600.

Out of the 200 hotels, however, only 24 had the opulence to qualify as "grand," Tolles said.

Many were entirely self-sufficient, with on-site farms offering fresh produce, dairy and meat. Some, such as the Mount Washington, even had their own water-powered printing presses to churn out daily menus.

Beginning with the arrival of the railroads in the 1850s, trains bringing passengers from Portland, Boston, New York and Philadelphia ushered in a time of prosperity for the mountains, with resorts catering to the wealthy upper class who could afford to spend their summers away from the city heat.

They could even stay on top of Mount Washington, with the first Summit House built in 1852, and the Tip Top House in 1853.

The subsequent gilded era after the Civil War brought luxury to a new level.

"While this era and its accompanying lifestyle are mostly long past," said Tolles, "there remains a great fascination with that era."

Tolles has had a lifelong love for the White Mountains, out of which grew his fascination with the hotels and cottages of the region.

"My affinity for the region and the Granite State as a whole inspired me to write my 1979 book, 'New Hampshire Architecture,' which contained many references to the state's grand resort hotels," said Tolles, a part-time summer Sandwich resident.

In 1997-98, he served as curator of a special exhibit by the New Hampshire Historical Society on the grand hotels.

Following three years of extensive research, that led to the publication of his book, "The Grand Resort Hotels of the White Mountains: A Vanishing Legacy." Though now out of print, the 1998 book is available on Amazon.com, as well as at public libraries in Jackson, Bartlett, North Conway and Conway.

In his hourlong presentation, Tolles related how the word "grand" connotes everything about what these massive places represented in their heyday: imposing, luxurious, dignified, stately, grandiose ...

"There is no question that 'grand' is a powerful word indeed, and these synonyms characterize the hotels," said Tolles, showing images of structures lost to the mists of time: the Pemigewasset House in Plymouth; Sugar Hill House of Franconia; and the three Profile Houses of Franconia Notch, which were once located below the visage of Old Man of the Mountain and on the shores of Profile Lake; and the Alpine House in North Woodstock.

There was also the Flume House, also in Franconia Notch; the Sinclair House and Maplewood of Bethlehem (the Casino still serves as the clubhouse for the Maplewood Country Club); the Waumbek of Jefferson; the Twin Mountain House in Twin Mountain; the Fabyan House and the ornately designed, gingerbread-house-like Mount Pleasant House in Bretton Woods; the Crawford House at the site of today's Appalachian Mountain Club Highland Center at the height of Crawford Notch; the Glen Houses at the base of the Mount Washington Carriage (now Auto) Road; the four different Gray's Inns in Jackson (now the site of the Jackson Public Library); the Iron Mountain House, also in Jackson on the site of today's Red Fox Bar and Grill; and the Kearsarge House, once located at the site of today's North Conway Community Center and the adjacent former center which is planned to soon become the North Conway branch of the Franconia-based New England Ski Museum.

Then there was the old Hotel Randall, once located near the Eastern Slope Playhouse, as well as the 1981-restored Eastern Slope Inn (built in 1926 as the Hotel Randall), which is listed on the National Register of Historic Places, as are the Mountain View Grand in Whitefield, Eagle Mountain House and Wentworth Inn in Jackson, and the Omni Mount Washington Hotel in Bretton Woods.

"I define 'grand' as those which were able to accommodate 200 or more guests and which were often designed in styles to connote opulence, lavishness and a sense of escape in their cultural, dining and recreational experiences," Tolles said.

Coaching parades in North Conway and Bethlehem, resident orchestras, hotel interleague baseball games, the rise of golf and tennis ... all were part of the resort life in the latter half of the 18th and early 19th centuries, Tolles related.

As he writes in his book, "After the economic hard times of the 1870s and a resurgence of prosperity, Americans embraced the grand resort hotels for reasons that went beyond their traditional basis of appeal ... Responding to the new, romanticized vision of outdoor life and athletic competition, the hotels supplemented the old, well-entrenched evening promenade, the seeking of cures and other quite sedentary pursuits with a rich array of sporting activities including hiking, fishing, boating, bicycling, golf, tennis, lawn bowling, croquet, badminton, archery, horseback riding, polo and baseball."

NIH Director on Omicron: 'There's no reason to panic' but go get boosted

Tolles noted that the hotels "introduced several important conveniences and advances in technology, including improved fireplaces, steam heat, gas and electric lights, improved sanitation and water systems, elevators, bell and telephone communication systems and box-spring mattresses before either were generally available in the American home."

He also spoke about such early tourism characters as the "Philosopher of the Pool" in Franconia Notch; primitive mapmaker and homespun poet Franklin Leavitt of Lancaster; and John "English Jack" Vialls, a British adventurer who lived in his "Ship" near the Crawford House summers from the 1870s to 1912 after helping to build the Portland & Ogdensburg Railroad through Crawford Notch in 1875. He used leftover timbers from the Mount Pleasant House for materials for his crude shelter.

The colorful Vialls was known to bite off the heads of frogs and snakes for the right price to entertain visitors to his wooded shack near the base of Mount Willard, and also sold copies of his life story, told in verse.

Leading characters in the story also were the architects behind the behemoths, including New York's William A. Bates, designer of the Queen Anne-styled Wentworth Hall, built for Gen. Marshall Wentworth in Jackson in 1882 (and restored by developer Ernie Mallett Jr. in 1982).

The Wentworth is now owned and operated as the Wentworth Resort Hotel by Ellie Koeppel, widow of late hotelier/owner Fritz Koeppel.

And there were the era's noted hoteliers, such as the Barron, Merrill and Barron Co., which owned and operated several properties, including the 1859-built Crawford House from 1872-1908. That grand hotel closed in 1975, its contents sold during a memorable and emotional four-day auction in 1976, with the unoccupied shell of the once glamorous structure burning in 1977.

The Crawford House's restored depot now serves as an Appalachian Mountain Club information center, offering historical displays on the history of the site.

Like the stately Crawford House, Tolles noted that most of the grand hotels were hastily built and made of wood, resulting in so many falling victim to fire.

Others were not maintained and were razed after the lifestyles of the rich and famous changed following the growth in popularity of the automobile, which led to the rise of motor court cottages and shorter vacation stays.

But carrying on the grand tradition for those who want to experience a glimpse into the past world of the grand hotels are the gracious 1902-built and recently renovated Omni Mount Washington Resort in Bretton Woods.'

The Balsams, meanwhile, awaits its transformation.

"They all give us pause and optimism and are evidence that the grand resort hotels phenomena in the northern Appalachian Mountains and New Hampshire's White Mountains will endure well into the 21st century, despite fires, physical obsolescence, competition and the ever-changing nature of tourism," Tolles concluded.

The Omni Mount Washington opened to winter use in 2000 by its previous North Country owners (Joel and Cathy Bedor and Susan and Wayne Presby of the Cog Railway) was sold to CNL Lifestyle Properties in 2006, and was managed by Omni Resort Hotels, which bought it in 2015.

The grand hotel has added a spa, as has the Mountain View Grand.

The Wentworth is adding a new, larger handicap-accessible elevator.

And the Eagle rebuilt its grand porch this spring.

The Eastern Slope Inn, meanwhile, has seen new life as an inn and timeshare hotel under the ownership of Joe Berry and partners since 1980.

The grand resorts appeal to those seeking a historical experience and elegant accommodations, note local hoteliers, such as Craig Boyer, general manager of the 96-room Eagle Mountain House and Golf Course, owned since 2012 by George Eaton.

"We are always keeping up the maintenance work," said Boyer, noting that several more improvement projects are planned in the future.

As for the inn's clientele, Boyer said guests come for the hotel's ambience.

"Most people who come to stay here do their research online, and they know what to expect — it's what they are looking for. They like its history and its charm."

Grand they all are, at that, reminders of a time when the White Mountains of New Hampshire first beckoned tourists to sample the delights that still bring visitors from around the region, the country and the world.