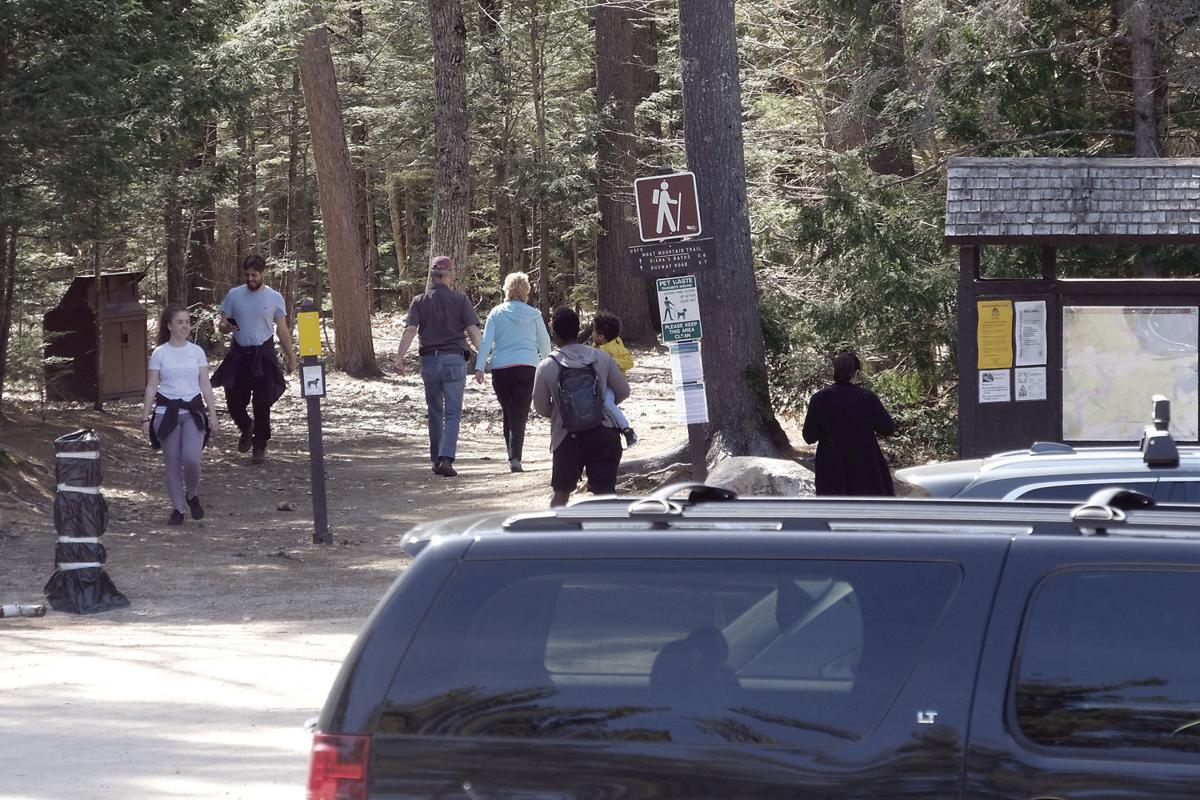 Visitors throng Diana’s Baths recreation site in North Conway last Saturday despite the trailhead being closed by the White Mountain National Forest due to the COVID-19 pandemic. (JAMIE GEMMITI PHOTO) 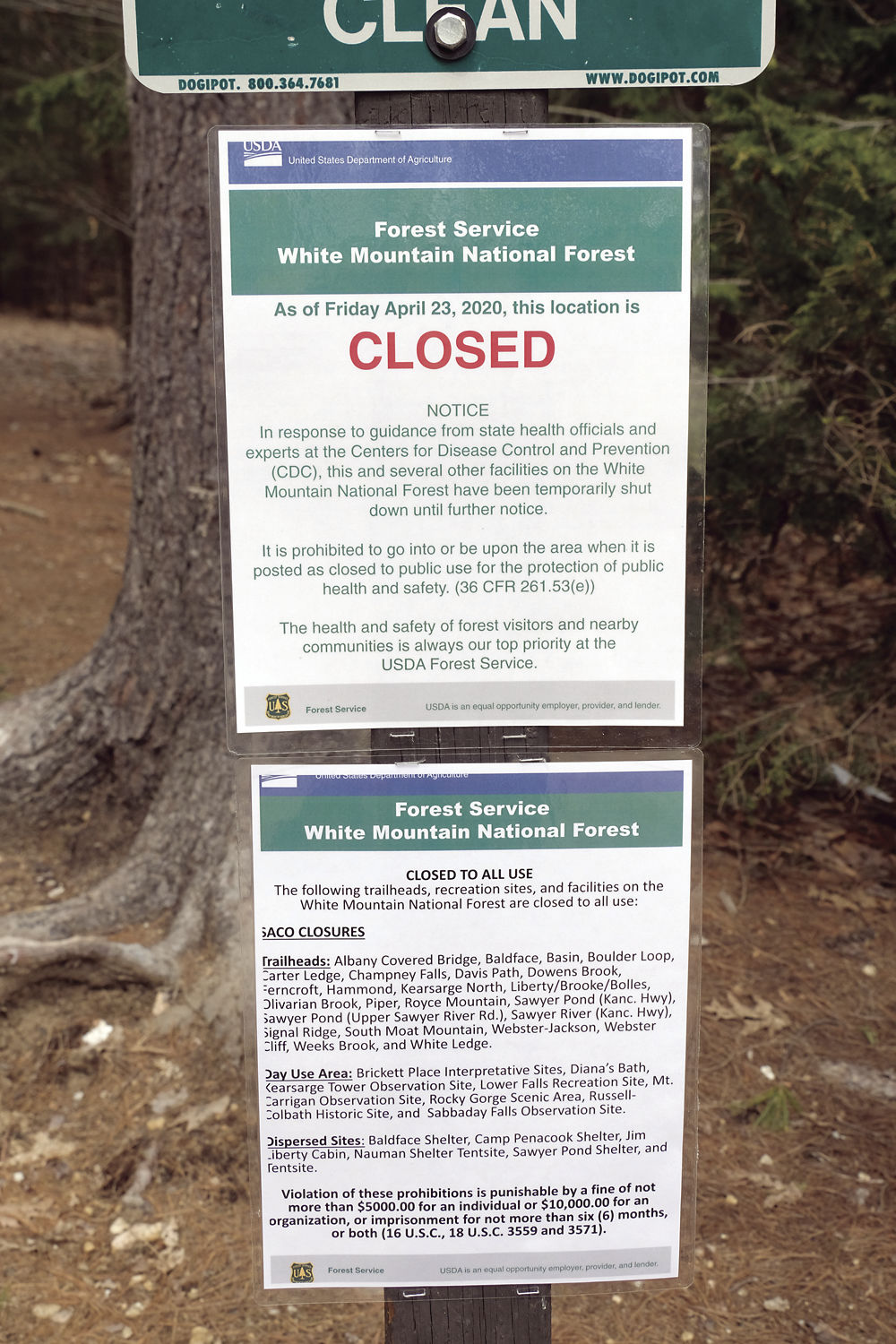 A notice (at bottom) was posted by the White Mountain National Forest with other signs at Diana’s Baths recreation site, listing trailheads closed due to COVID-19. (JAMIE GEMMITI PHOTO) 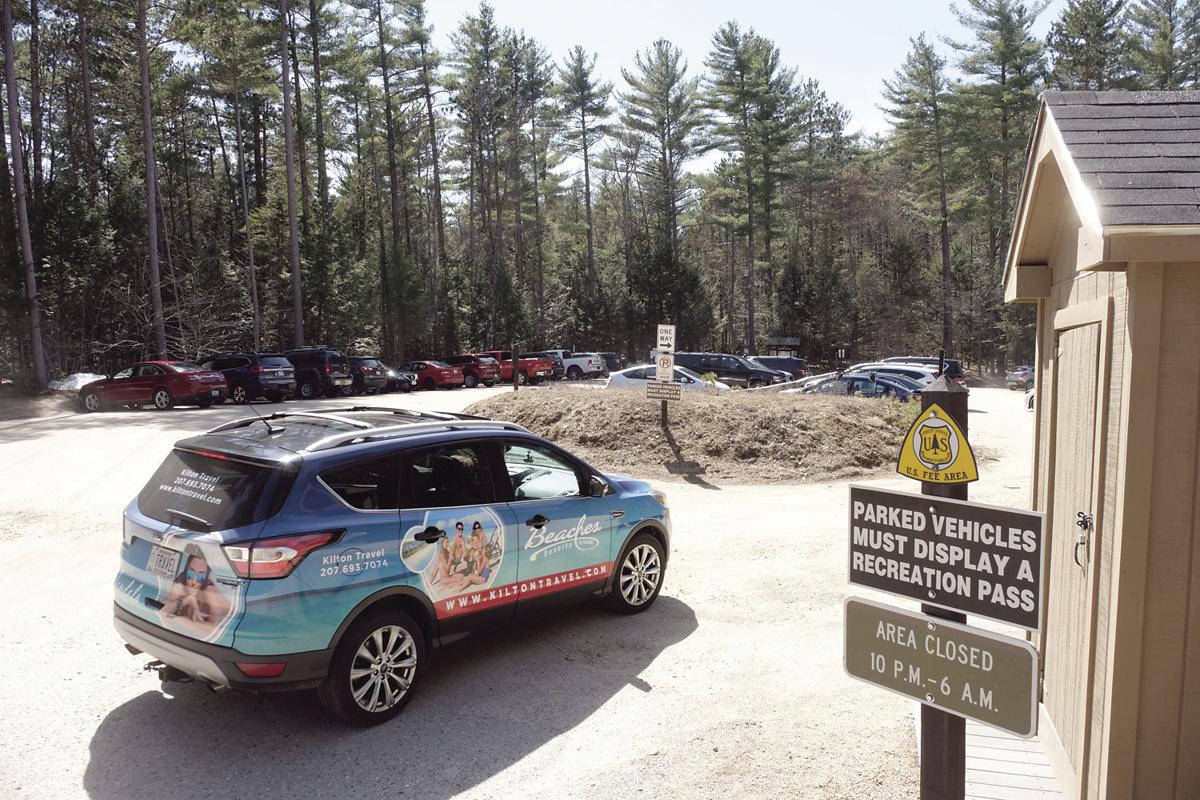 Many vehicles were parked at Diana's Baths recreation site in North Conway on Saturday despite the trailhead being closed by the White Mountain National Forest. (JAMIE GEMMITI PHOTO)

Visitors throng Diana’s Baths recreation site in North Conway last Saturday despite the trailhead being closed by the White Mountain National Forest due to the COVID-19 pandemic. (JAMIE GEMMITI PHOTO)

A notice (at bottom) was posted by the White Mountain National Forest with other signs at Diana’s Baths recreation site, listing trailheads closed due to COVID-19. (JAMIE GEMMITI PHOTO)

Many vehicles were parked at Diana's Baths recreation site in North Conway on Saturday despite the trailhead being closed by the White Mountain National Forest. (JAMIE GEMMITI PHOTO)

CONWAY — Although the White Mountain National Forest announced last Friday that it was shutting down high-use trailheads until further notice as a way to promote social distancing due to COVID-19, that didn't deter a number of people from parking at Diana's Baths recreation site and along local roads over the weekend, seeking a place to hike.

While New Hampshire has a "Stay Safe at Home" order in place, unseasonably high numbers of visitors have been visiting the national forest, resulting in increased potential for exposure to coronavirus, WMNF said.

In a statement released April 24, acting forest supervisor Connie Carpenter said that trails would remain open but would be accessible only by foot traffic.

"If you are able to walk to the trailhead without driving, you can access the trail. Parking on most WMNF roads is prohibited," she said. "Remember to pack out what you pack in."

Violations would be punishable by a fine of not more than $5,000 for an individual or $10,000  for an organization, or imprisonment for not more than six months, or both, the statement said.

With the trailheads closed, a large number of people came up Mount Surprise Road in Bartlett in order to get outside and do some hiking.

At one point on Saturday, "five cars arrived at one time (one from Massachusetts, two from New Hampshire and two from Rhode Island)," said Sun Sports Editor Lloyd Jones, "and they parked right on our property.

"I had to tell them they were on private property and that there is no parking on town roads until May 1 due to the (winter) road ban," he continued.

"They proceeded to drive to the end of the road and blocked Wink Lees' yard and driveway. He had to put up 'no parking' signs."

"Diana’s Bath just now," said Lauren Purtell of North Conway, posting a photo of the packed parking lot on the WMNF Facebook page. "If none of this is going to be enforced, why bother?"

The Sun reached out to the WMNF Public Affairs and Partnership Liaison Sherman Hogue on Monday asking him to clarify enforcement of the closure.

"I can push your questions up to the Regional Office with our proposed answers, but I do have to let you know, it can take a bit for them to respond due to the high volume of stuff they are currently dealing with," said Hogue.

Jeff Leich, who is the executive director of the New England Ski Museum, with branches in Franconia and North Conway, lives in Conway near Diana's Baths.

He said he saw the situation there Sunday morning at around 11:30 a.m. while running errands with wife, Martha. He said he saw three cars and a camper parked there. He said there was a closed sign but that it was "relatively small."

"I'm sure the forest service has their hands full before they get their seasonal help in trying to put these orders in place," Leich said, adding that the service hasn't been able to barricade all the trailheads yet.

Leich says he "has a ton of sympathy for the people who are trying to put these orders into effect," adding that he knows they don't have the manpower to enforce the orders.

But he said it would "be nice" to have barricades make the point before someone pulls in and unloads.

Leich also noted the forest service closed the Cutler River Drainage about a month ago, warning the public on social media a week in advance that a closure was likely because of the need for social distancing.

"In this case, it seems the official announcement came without much preparation," said Leich.

Conway Police Lt. Chris Mattei and the Carroll County Sheriff's Office Lt. Mike Santuccio both told the Sun on Monday that the Diana's Baths parking lot is under federal jurisdiction and that they are trying to talk with the forest service about it.

"Why did the forest service spend money to run this notice if they weren’t going to enforce the closings? Parking lots were jammed with cars from out of state," noted Virginia Moore on the WMNF Facebook page.

"At $5,000 per pop, it seems some enforcement expenses could have been covered, at least a sign or some barriers to discourage parking and hiking."

But not everyone thought the closure was a good idea. Lindsay Stone, who identified herself as a nurse, posted on the WMNF Facebook page that "a trail is not where this is being transmitted. People need fresh air, 6 feet apart from one another. People need exercise. This is unnecessary ... After fighting this awful virus on the front lines every week, now I don’t even have my outlet in the woods."

As a resident of MA, I just wanted you to know that some of us are taking all of this seriously. As much as I would love to be up in your neighborhoods hiking, I have the self control, unlike some others apparently, to stay home and obey NH policies. I, too, deplore the entitled disregard for your efforts to minimize the impact of Covid-19.

"If you are able to walk to the trailhead without driving, you can access the trail. Parking on most WMNF roads is prohibited," she said. "Remember to pack out what you pack in." - So what is the policy on using a mountain bike to access a trail? I ask because while all this bandying about is amusing it's completely illegal. Any police enforcement of illegal executive orders is a felony. If the governor has issued an illegal order - that's a felony too! Everyone keeping track? Bad for the old career.

Why are there thousands of cars going into MA everyday for work and then back? Aren't they risking the spread of the virus back into NH? The signs clearly say you Must Quarantine for 2 weeks if you enter.

Yeah, it is also ok for Mass people to go into NH and buy up Costco and booze, and its ok for people in Southern NH to come north but not those Mass people. Same with Maine crossings. Guess what Gov you lost my support, why don't you look to Fl and see how they have contained things with 20X the population. The Mass Gov is a disgrace, do you have to join him with your commie behaviour. We do have a constitution. We live in the United States of America, not the make things up as you please NH. Time to change Live Free or Die to hide in your house and die. You need to study the data to see why some people get this and die and why others don't and figure out how to help those that are prone to the bad stuff from this as oppose to shutting down our economy putting us all at risk to what that entails.

The USFS should have closed the WMNF early on, as a matter of public safety, just as they did for Storm Irene. This is too little, too late.

To say we closed the parking lot only and do not allow people to park on the road, but the trail is open if you can walk there is a bit disingenuous. If you can walk 14 miles to the UNH trailhead feel free to hike the trail. What was the difference with the closure of Tuckermans Ravine and all the other trails surrounding it? Can I now hike there as well if I can walk to the AMC hut?

Evidently the people disobeying the law can’t read the signs.

The DMV should suspend their licenses until they are required to take a vision test and confirm their ability to safely read signs and navigate on the road.

As usual laws don’t apply to these

More entitled people who think that rules don't apply to them. I don't know why these cars aren't ticketed, towed, and/or booted to get the message across.