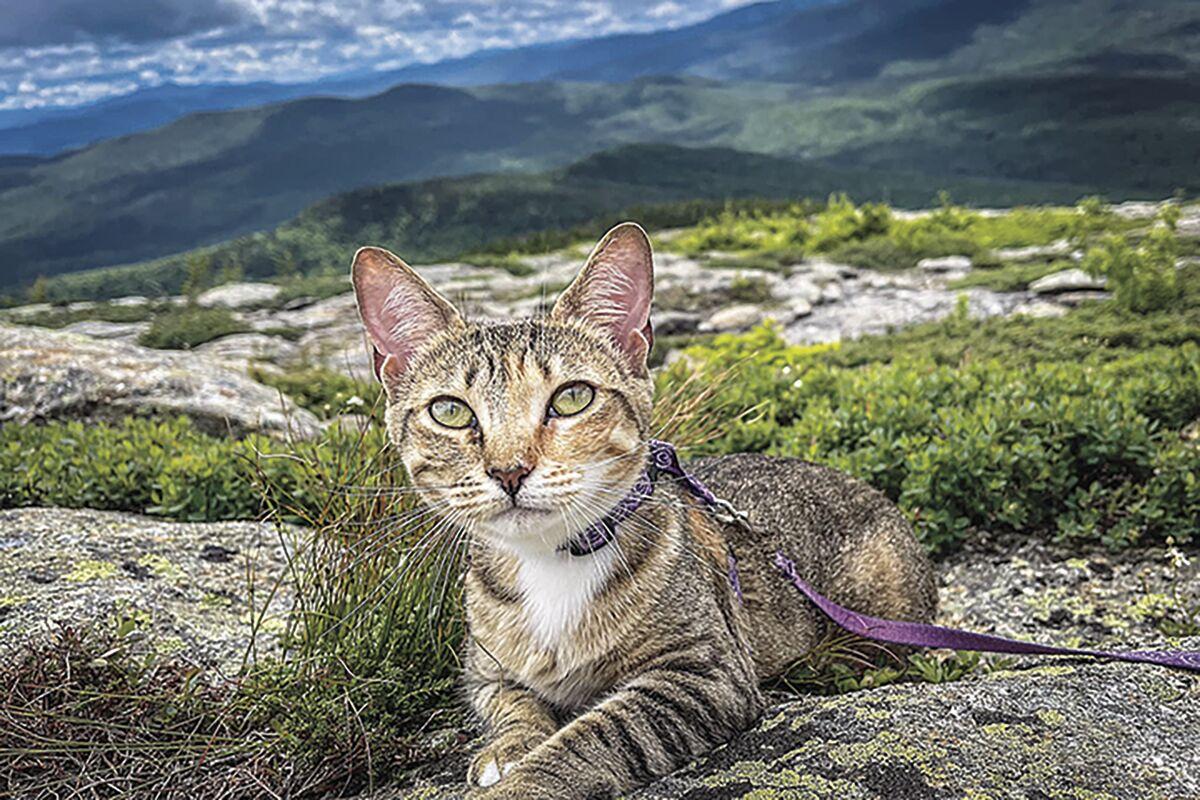 Floki is seen on a hike of North and South Baldface with Mel Elam earlier this week. (MEL ELAM PHOTO) 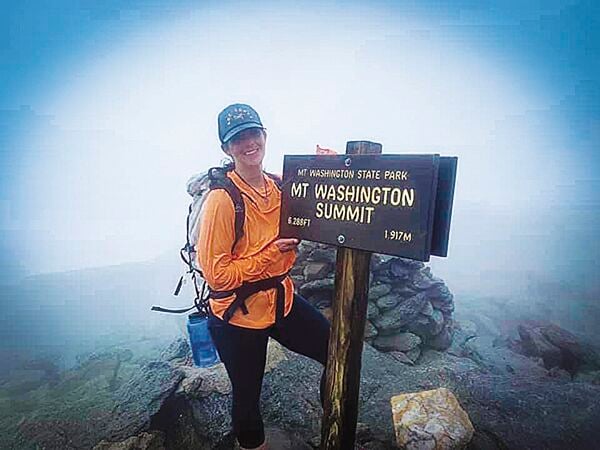 Mel Elam and her cat Floki (avoiding the wind in her backpack) take a photo on top of Mount Washington, Floki's final peak of the 48 highest mountains in New Hampshire. (COURTESY PHOTO) 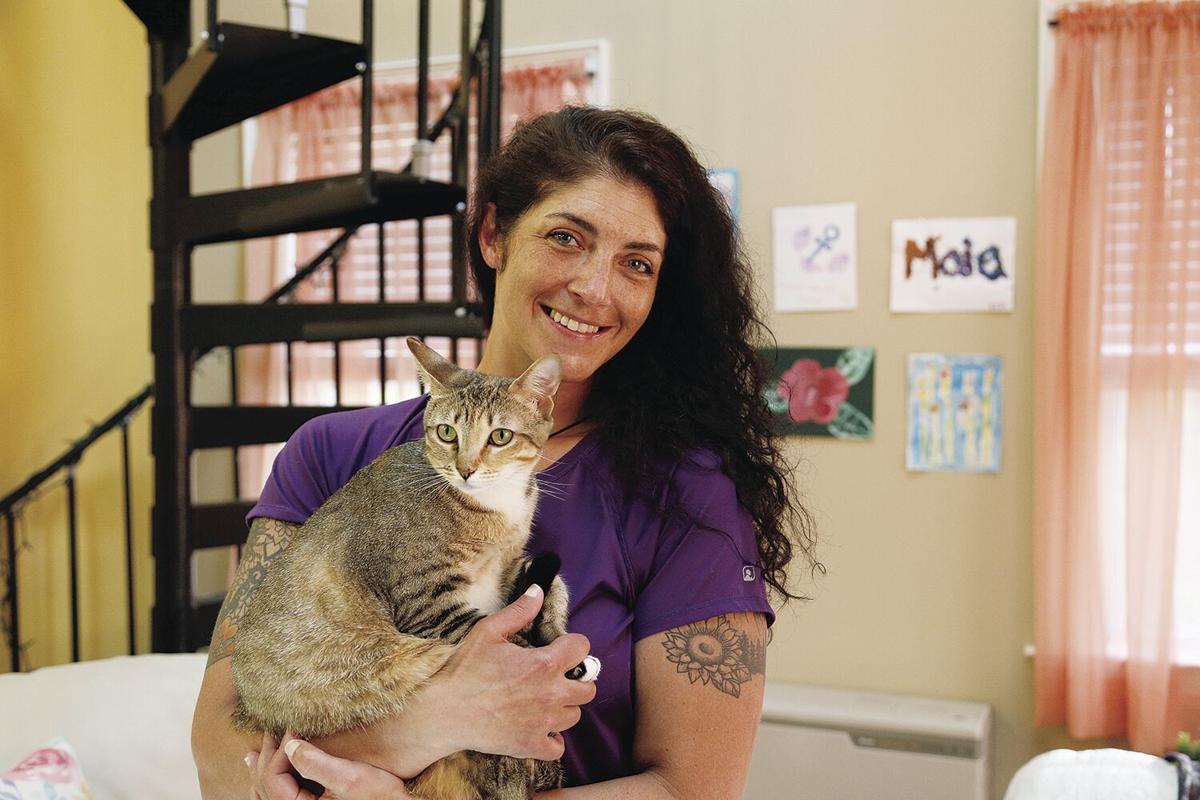 Floki is seen on a hike of North and South Baldface with Mel Elam earlier this week. (MEL ELAM PHOTO)

Mel Elam and her cat Floki (avoiding the wind in her backpack) take a photo on top of Mount Washington, Floki's final peak of the 48 highest mountains in New Hampshire. (COURTESY PHOTO)

CONWAY — Floki the cat and her human, Melissa Elam, recently succeeded in climbing all 48 of New Hampshire's 4,000-foot-plus mountains by summiting Mount Washington, a milestone that Elam of North Conway called "bittersweet."

They will now be climbing smaller but still scenic mountains to raise funds for the Mt. Washington Observatory and Conway Area Humane Society.

Elam, 36, who is originally from Boston, came to the Mount Washington Valley in 2009, living first in Tamworth before moving to North Conway.

Elam has four children: Vincent, 15,  Elijah, 13, Shiloh, 9, and Maia, 5. She works as a surgical technologist at Memorial Hospital.

After the passing of her original hiking partner, a chocolate Lab named Leia, and a senior male cat named Darth, Elam went to the Conway Area Humane Society last September to find a companion for her other cat, Tula.

She was searching for a small black kitten, not a 10-month-old gray striped domestic shorthair. But it was a match. And since then, Elam and Floki have been climbing New Hampshire's mountains. Floki either rides in Elam's pack or take a stroll on a leash, and seems to enjoy every minute.

Elam named Floki after a character on the History Channel show “Vikings” who she described as a mischievous boat builder. She thought she’d be getting a male kitten but said she kept the name "even though she’s female.”

According to Conway Area Humane Society Executive Director Tim Westwig, the cat was a stray who was brought into a Fort Lauderdale shelter with a sibling who was ill and didn’t survive. She was brought to Conway from Florida along with 20 other cats.

Word started getting out about Floki after their first 4,000-foot mountain climb on Mount Moosilauke last September. A woman shot a candid photo of Elam cuddling Floki and posted the photo on Facebook, and a star was born.

When the Sun last checked in on the duo in February, they had hiked 26 of the 48.

Joining them was a group of six friends — Anthony Forshay, Mark Burke, Ashley Cyr, Mark Vojtko, Michaela Marshall and Eric Sweet — and a dog named Finris. They rode the Mount Washington Cog Railway back down.

"We did a modified Northern Presidential traverse," Elam explained. "So we started off of Route 2, and we summited Mount Madison first, because (Floki) needed Madison, Jefferson and Washington."

Floki and Elam could skip Mount Adams because they had already climbed it.

"It was a very bittersweet day," said Elam, who said wrapping up the 48 made her think "of all the experiences that got me to where I was that day."

Floki's climbing all 48 4,000-footers has turned her into a world-class celebrity. Stories about her and Elam have appeared in USA Today. Elam said that news outlets in Mexico and Austria have also reached out to her.

During the last climb, safety was a concern, and they prepared for rain and wind, as Mount Washington is famously "home to the world's worst weather."

"Just after Jefferson is when the winds started really picking up," said Elam. "They were probably 60 miles an hour with gusts up to 70."

Because of the nasty weather, Floki didn't get out of the pack at the summit, but she did some of the journey on the way to Mount Washington under her own power.

"She did keep trying to peek her head out to experience the weather, but we were really careful about making sure that she wasn't exposed," said Elam, who added they went inside the Observatory and were recognized by the staff members there.

Floki will have another crack at Mount Washington soon as she and Elam plan to participate in "Seek the Peak," a major fundraiser for the Obs on July 16-17 in which participants need to raise at least $200.

Elam says she and Floki also want to help the Conway Area Humane Society with its Trails and Tails event in September, though "nothing is etched in stone yet," said Elam.

Floki and Elam are also working on the list of the "52 with a view" — a group of scenic mountains. She and Floki climbed the Baldfaces in Chatham on Tuesday.

"There were a handful of people out there that did recognize her," said Elam of her feline celebrity companion.

To see photos and videos of Floki tackling the 4,000-footers, find “Adventures with Floki” on Facebook or go to Instagram, where the profile tag is adventureswithflokicat.

Wow, what a feathering the cap for both of them just considering Mt. Washington and the other two to get there. Congratulations on finishing this milestone of the 48 and bringing attention to the shelter. ❤️