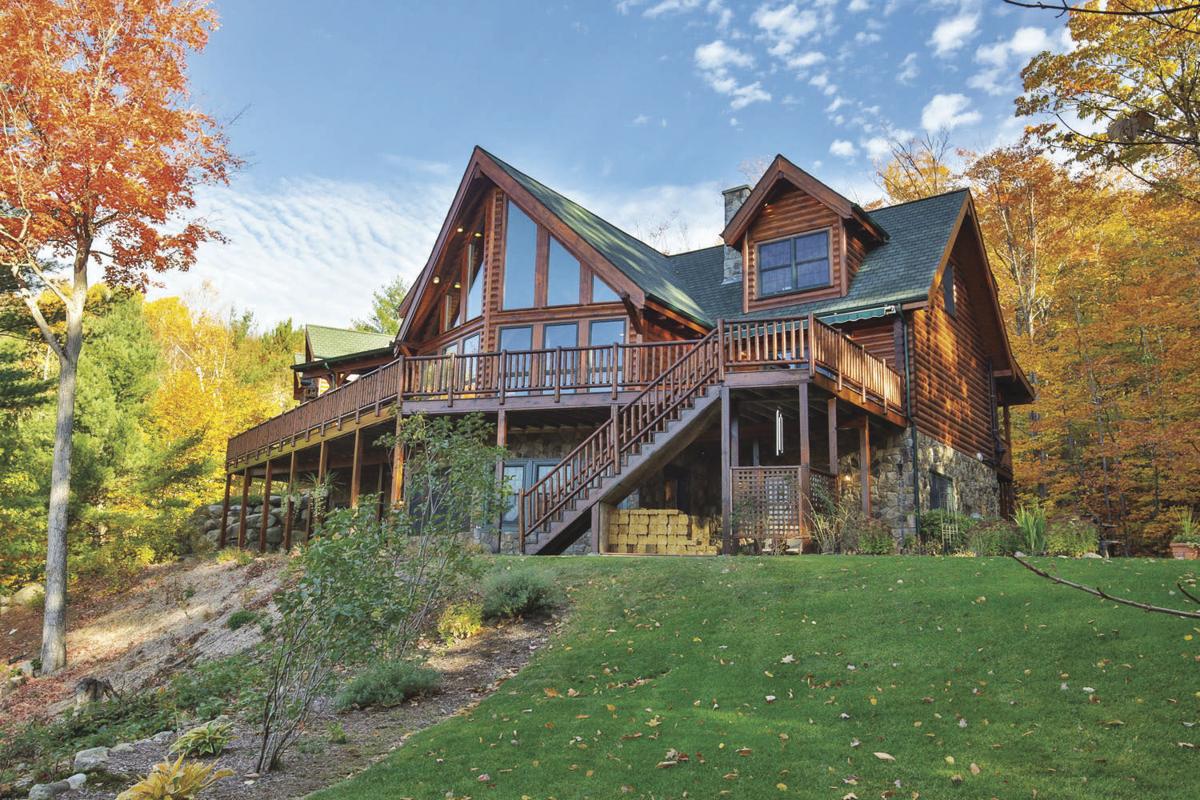 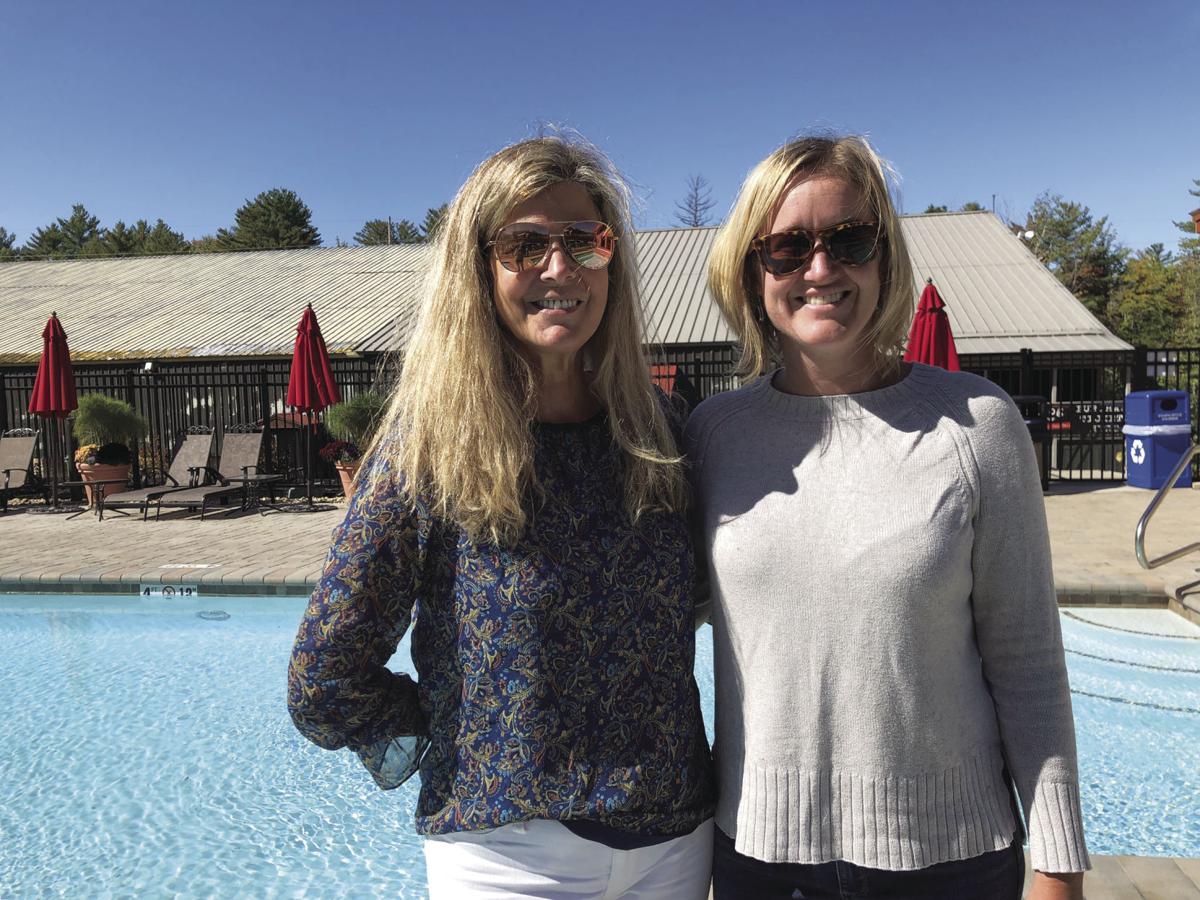 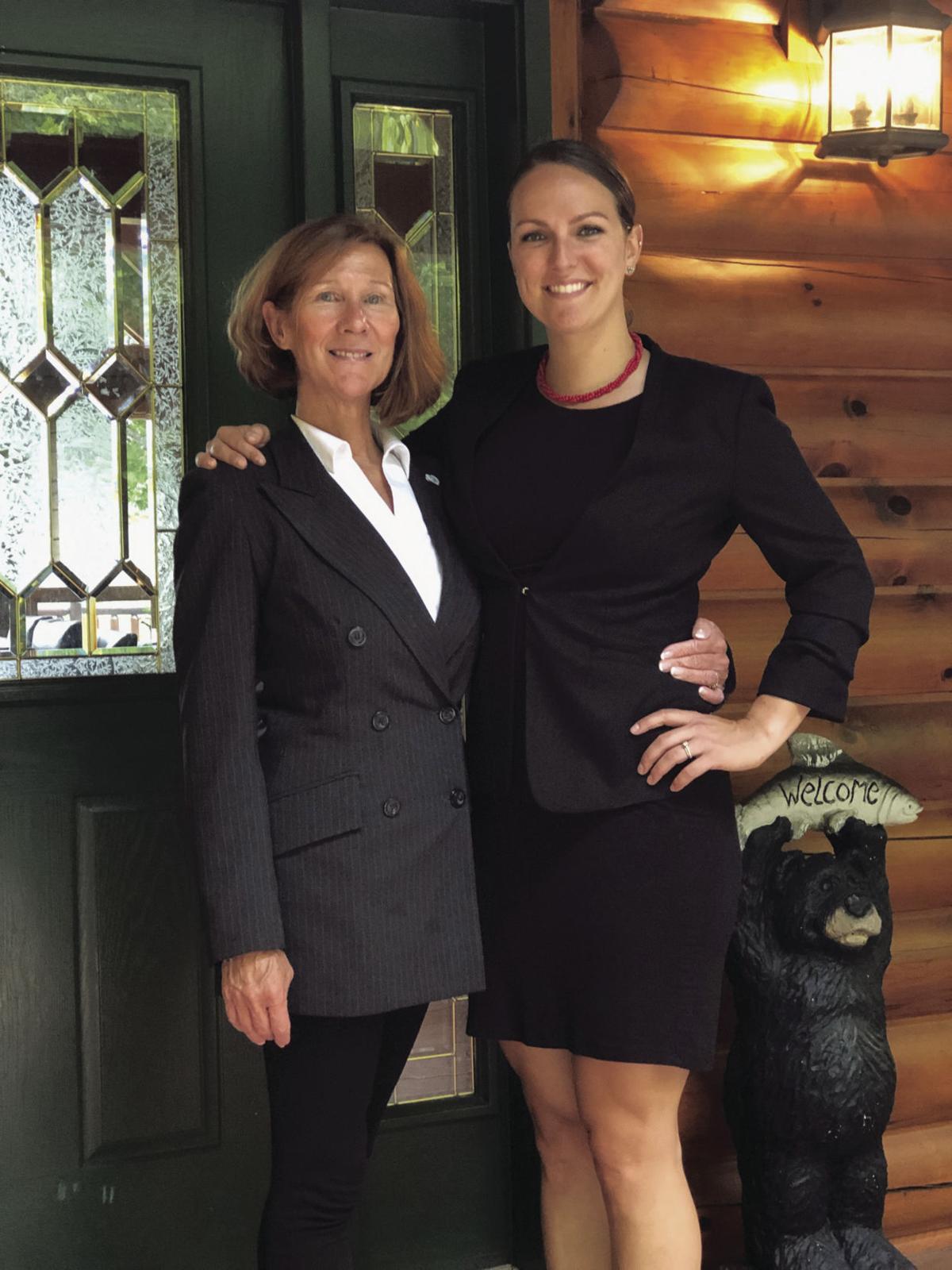 Realtor Theresa Bernhardt (left) of Keller Williams Lakes Mountains Realty of North Conway and her daughter, licensed assistant Sharrene Bernhardt Henderson, are shown at the home at 456 Glen Ledge Road that Bernhardt sold to a New Hampshire couple in January for $1.21 million. The property and the homeowners were featured in a Sept. 20 Wall Street Journal article on high-end New Hampshire ski homes, entitled, "“For New Hampshire Ski-Home Buyers, The Icier The Better.”(COURTESY PHOTO) 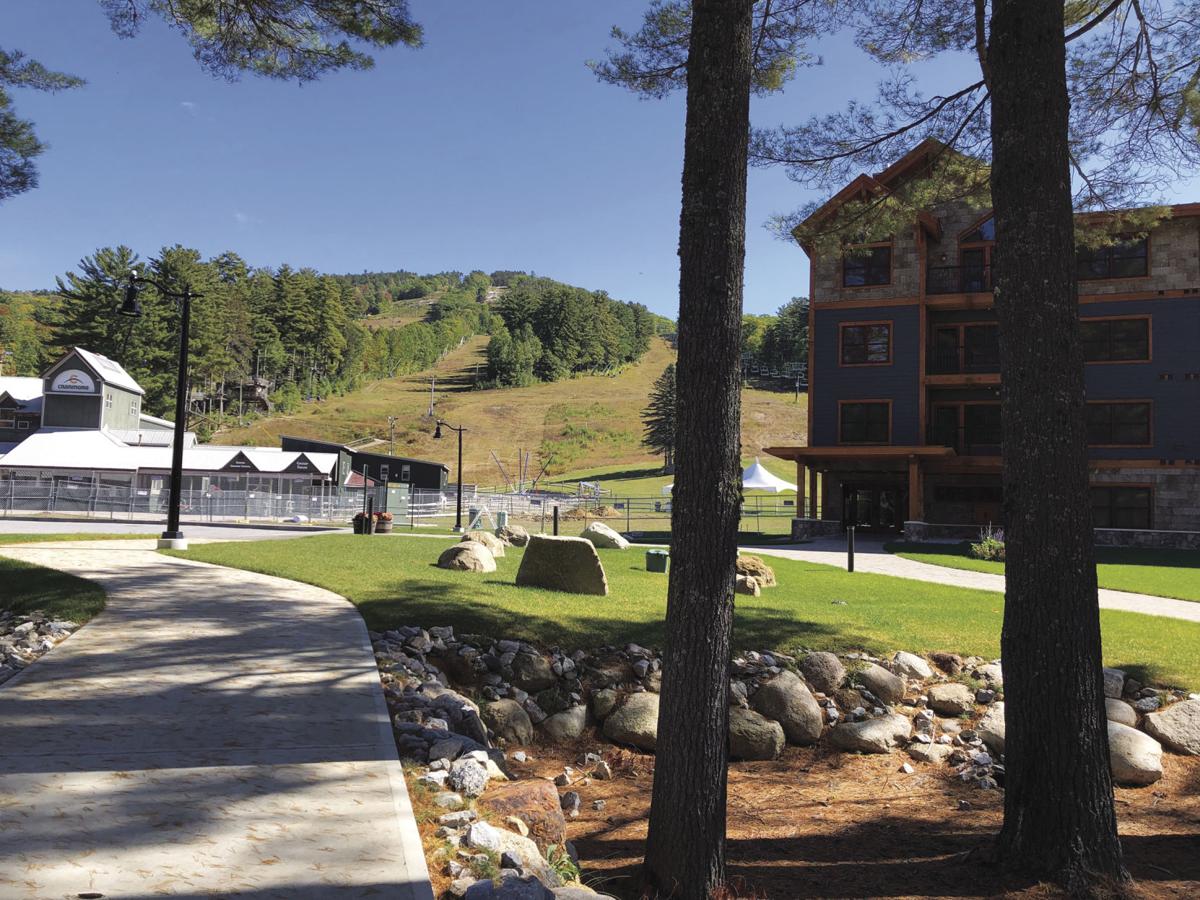 The site of Kearsarge Brook Phase Two is seen to the left of Phase One, which was built in 2017. (MARGARET McKENZIE PHOTO)

Realtor Theresa Bernhardt (left) of Keller Williams Lakes Mountains Realty of North Conway and her daughter, licensed assistant Sharrene Bernhardt Henderson, are shown at the home at 456 Glen Ledge Road that Bernhardt sold to a New Hampshire couple in January for $1.21 million. The property and the homeowners were featured in a Sept. 20 Wall Street Journal article on high-end New Hampshire ski homes, entitled, "“For New Hampshire Ski-Home Buyers, The Icier The Better.”(COURTESY PHOTO)

The site of Kearsarge Brook Phase Two is seen to the left of Phase One, which was built in 2017. (MARGARET McKENZIE PHOTO)

A luxurious log vacation home in Glen that was sold in January for $1.21 million and a three-bedroom unit at Cranmore’s new Kearsarge Brook Condominiums that went for $600,000 were both recently featured in The Wall Street Journal.

Theresa Bernhardt of Keller Williams Lakes and Mountains Realty of North Conway was thrilled with the article. “It was great to see the national exposure,” she said last week.

Bernhardt, who was named “Realtor of the Year” by the White Mountain Board of Realtors in 2018 and also served as president of the group last year — represented buyers Gosia and Mark Moreau on the Glen sale.

Bob Carper was the builder and seller of the 5,700-square foot home, dubbed Black Bear Lodge, that is located at 456 Glen Ledge Road.

“The Moreaus had contacted me directly in December, and I showed them that property along with some other listings. We put it under contract that month,” said Bernhardt.

Carper, past board member and past president of the Mt. Washington Valley Chamber of Commerce, is the New England representative for Natural Element Homes of Sweetwater, Tenn. He said he started building Black Bear Lodge in 2004 and finished it the following year.

“It has south-facing views toward Attitash’s Cathedral, Ammonoosuc and Saco trails,” he told the Sun recently. When you add the heated garage, it measures 7,000 square feet,” said Carper, adding, “We’ve been in national Log Home Living magazine before, but this is the first time in The Wall Street Journal.”

Bernhardt said the WSJ article also mentioned another listing of hers, a 4,400-square-foot property at 164 Birch Ledge Road in the Ledges of Birch Bend in Bartlett. Built in 2018 by local contractor Doc Gilmore, its asking price is $825,000.

Bernhardt said she was contacted by Gamerman in August “out of the blue,” with Gamerman explaining she was writing a story on ski vacation homes as part of a story on mansions.

“They wanted to focus on the Northeast for their ski second homes,” said Bernhardt. “I wrote back right away, saying that the Glen Ledge property had recently sold and that it was a big log home and definitely a high-end home and a desirable New Hampshire property.”

The Moreaus told Bernhardt they’d be open to being interviewed. Webb then came to Glen, spending six hours on the shoot with the Moreaus and their three children, Bernhardt said.

The WSJ article noted that in addition to buying their Bartlett ski home, the Moreaus also own a six-bedroom chalet at Loon Mountain in Lincoln, for which they paid $680,000 last year.

Gosia Moreau is a software designer, according to the article.

“Glen is a log cabin home, which is unique and cool. It’s very private and has beautiful views of Mount Attitash, and there’s also shopping at the outlets,” she told Gamerman.

Gosia — who founded an operations software company — and her husband, Mark, own four New Hampshire homes, including their primary residence in Windham and a lake house in Meredith, the WSJ said, which added that homeowers have seen their homes to be solid investments. In fact, the Moreaus said they rented their Loon chalet (which is listed on vrbo.com) so much last winter that they rarely got to use it.

According to a Realtor.com study mentioned in the story, home sales in New Hampshire’s White Mountains region grew 24 percent between January and May of 2019 compared with the same period last year.

Because “despite its reputation for icy slopes and punishing winters, the Granite State is drawing ski-home buyers with its mix of year-round recreational opportunities, its family-friendly vibe and easy access to restaurants and shopping,” Gamerman wrote.

Echoing that assessment was Realtor Diane McGregor, who is based out of Badger Realty’s Jackson office. She agreed that “our luxury homeowners are coming for the lifestyle.”

McGregor noted that with Vail Resorts purchasing both Attitash and Wildcat Mountains as part of the company’s pending acquisition of Peak Resorts throughout the nation, she expects the sale will boost real estate sales in the region, largely because of its Epic multi-area national ski pass.

It was through McGregor that Gamerman visited Kearsarge Brook at Cranmore. Part of a $50 million base redevelopment that calls for 106 units and 45,000 square feet of new base lodge space over the next six to eight years, the upscale condominiums are a project of The Fairbank Group, which is headed by the father-and-son team of Brian and Tyler Fairbank.

The Fairbanks selected John Ashworth of Bull Stockwell Allen, San Francisco, as lead architect of Kearsarge Brook, a firm that has worked extensively with such resorts as Stowe, Beaver Creek and Crested Butte.

The Kearsarge Brook units are represented by the Badger Realty Sales Team of Michele Jordan and Eileen Difeo.

The two recently met with the Sun to show off Kearsarge Brook’s sold-out Phase One, discuss Phase Two next door (on which contractor Atlantic Construction Group of Groton, Mass., broke ground in August) and explain how the WSJ feature came about.

“Diane McGregor was contacted by Amy Gamerman, who was looking for luxury ski homes,” Jordan said. “She immediately thought of Kearsarge Brook, and sent her our way.”

The Badger agents got Gamerman in touch with the Morses, who purchased a three-bedroom condo at Kearsarge Brook last year.

Dr. Katherine Morse is a doctor of anesthesia practice, and her husband, Jamie, is an ER physician. They and their three children live primarily in Rye, “but all of them ski, and were excited about the ‘ski in, ski out’ amenities at Cranmore,” Difeo said.

The Morse kids, ages 8 through 11, are enrolled in freestyle and pre-racing programs.

“We did look in Vermont — we were tempted, but we felt this was perfect for our family,” the WSJ quoted Katherine Morse as saying. “Cranmore is a very family-friendly mountain.”

Jordan and Difeo touted Cranmore Snowsports Director Karen Dolan’s children’s programs as being a big draw for Kearsarge Brook buyers, but they were also quick to say that it’s not only families that are buying condos there.

“We have young couples with no kids, grandparents and empty-nesters as well,” Jordan said, noting that buyers hail from Rhode Island, Connecticut, New Hampshire, and even North Carolina.

In addition, Kearsarge Brook is not just for skiers.

“What’s really special about Cranmore is its proximity to the village and all the amenities,” Difeo pointed out. “Our town has a lot to offer: shopping, spas, restaurants, yoga.” She also noted that the Mount Washington Valley Recreation Path, when built, will end up right on Cranmore’s doorstep.

Another draw is the fact that “there are no rental restrictions at KB,” Jordan said. Owners can rent their units out themselves for short-term or long-term as they want.

The slopeside or sunset view condos come with stainless/granite kitchens and generously sized rooms and corridors. All the trim is solid wood, as are the interior and closet doors. LVP (luxury vinyl plank) flooring offers the look of wood but with waterproof durability to fend off abuse from ski boots. While the Phase One units offer carpeted bedrooms, Phase Two will feature LVP floors throughout, Difeo said.

Other amenities at Kearsarge Brook include ground-floor ski lockers for each unit, membership access to the heated pool/hot tub, gated parking and of course mountainside entry to Cranmore.

Incentives for buyers in Phase Two, which is expected to be completed by next fall, include two years of year-round passes to Cranmore.

The new phase will be connected to the first condo building and share the main entry, locker room and elevator.

Like Difeo at Kearsarge Brook, who noted that “North Conway is booming,” Bernhardt commented that the local real estate market continues to be strong. “Interest rates are very favorable,” she said. “The inventory is still very tight, and there is a good number of buyers.”

She said the current trend is for homes in the 3,500-square-foot range versus the 5,700-square-foot size. “That’s why it took so long to sell the Glen Ledge home,” she said. “And those nearing retirement are seeking single-level living as they buy a second home.”

Brenda Leavitt, manager of Badger Realty, stressed that the luxury home market is not just about price or size. “It’s also about the quality of materials as well as amenities and features of the home.”

Case in point, she said, “is the project we built at the corner of Skimobile and Cranmore Road.”

“We sold out of all six individually owned homes within a couple of months. They had not made their way to the open market,” Leavitt said. “The price point was from $358,000 to over $425,000.” The selling prices worked out to over $300 per square foot, she said.

“The location, combined with the mountain theme, was the winning element with these homes,” Leavitt said. “This project proved the popularity of a smaller, somewhat more affordable luxury home.”

Whether it’s a condo like Kearsarge Brook or a free-standing home as at Timber Point, the one driving factor, she said, is “the buyers are all coming here for the same reason — quality of life!”

Carper countered that he continues to see demand for larger luxury homes.

“Everyone says there is a trend to smaller homes,” said Carper, “but I am not seeing that; maybe it’s because I deal in the high-end market. Most still want the 3,000-to-4,000-square foot homes, and there is one home being built in Jackson for 8,600 square feet.”