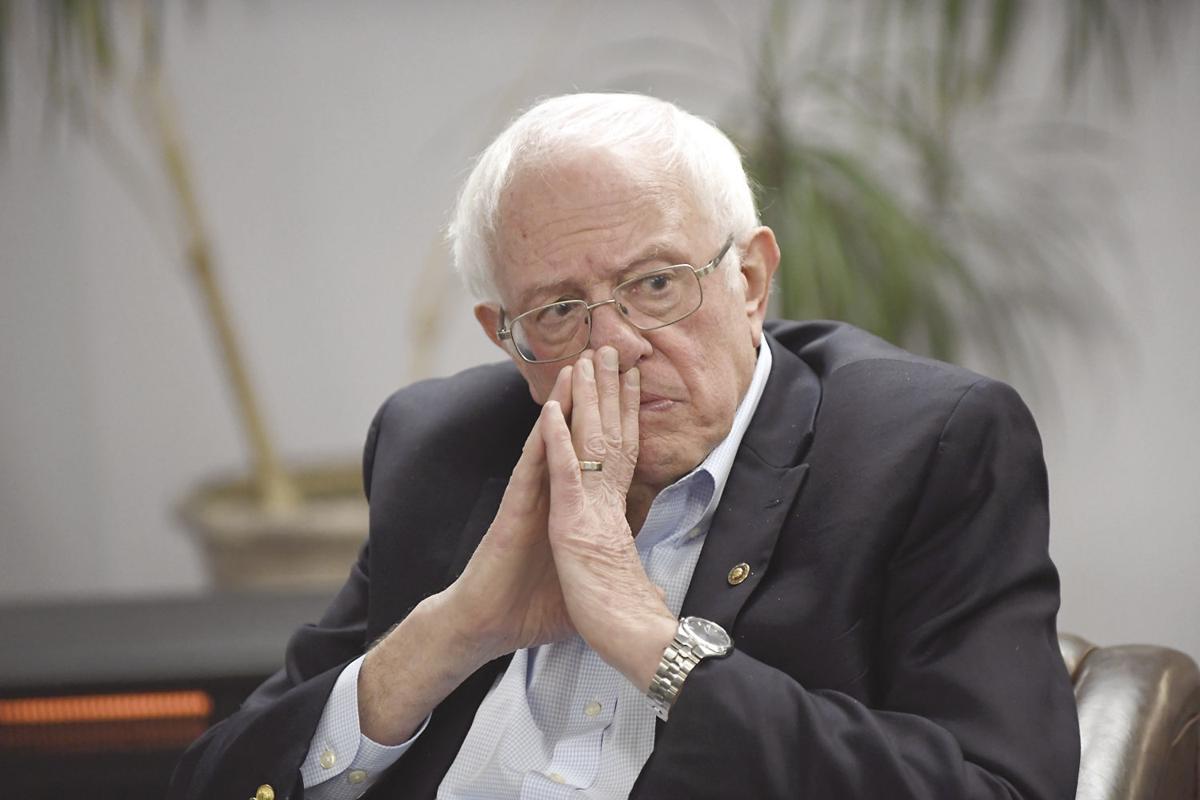 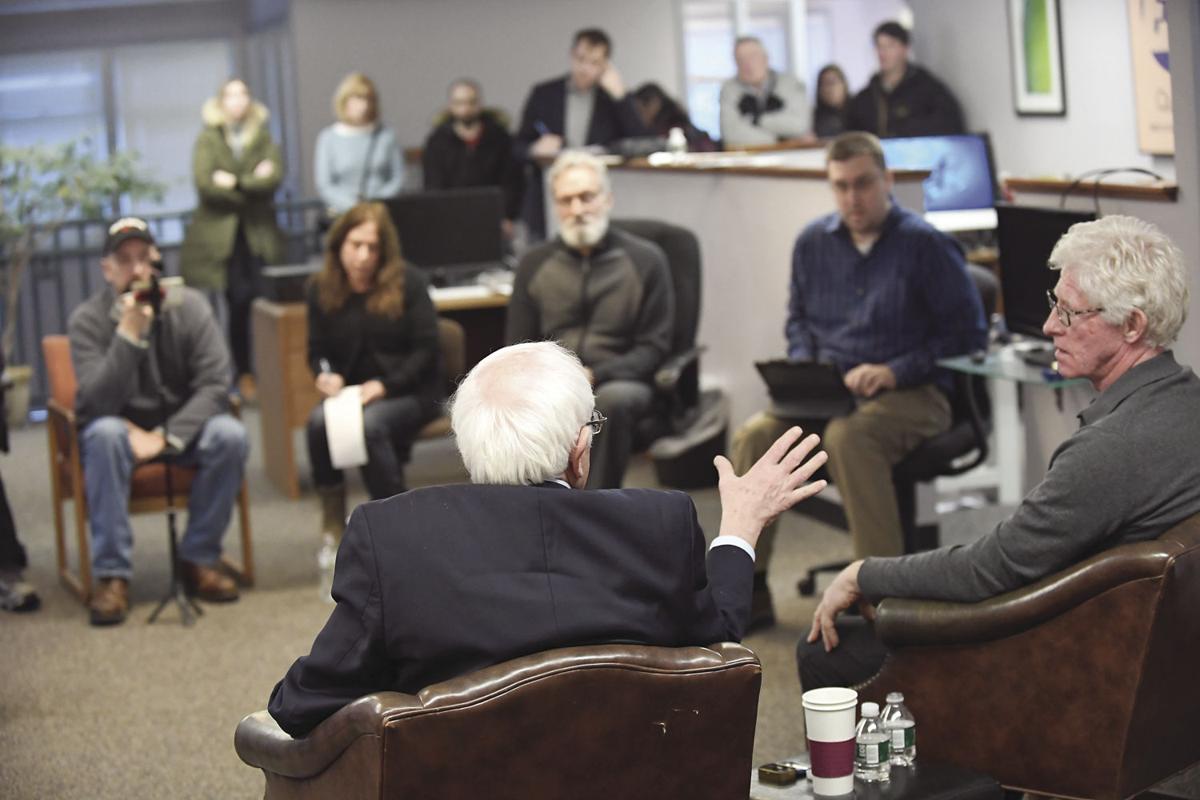 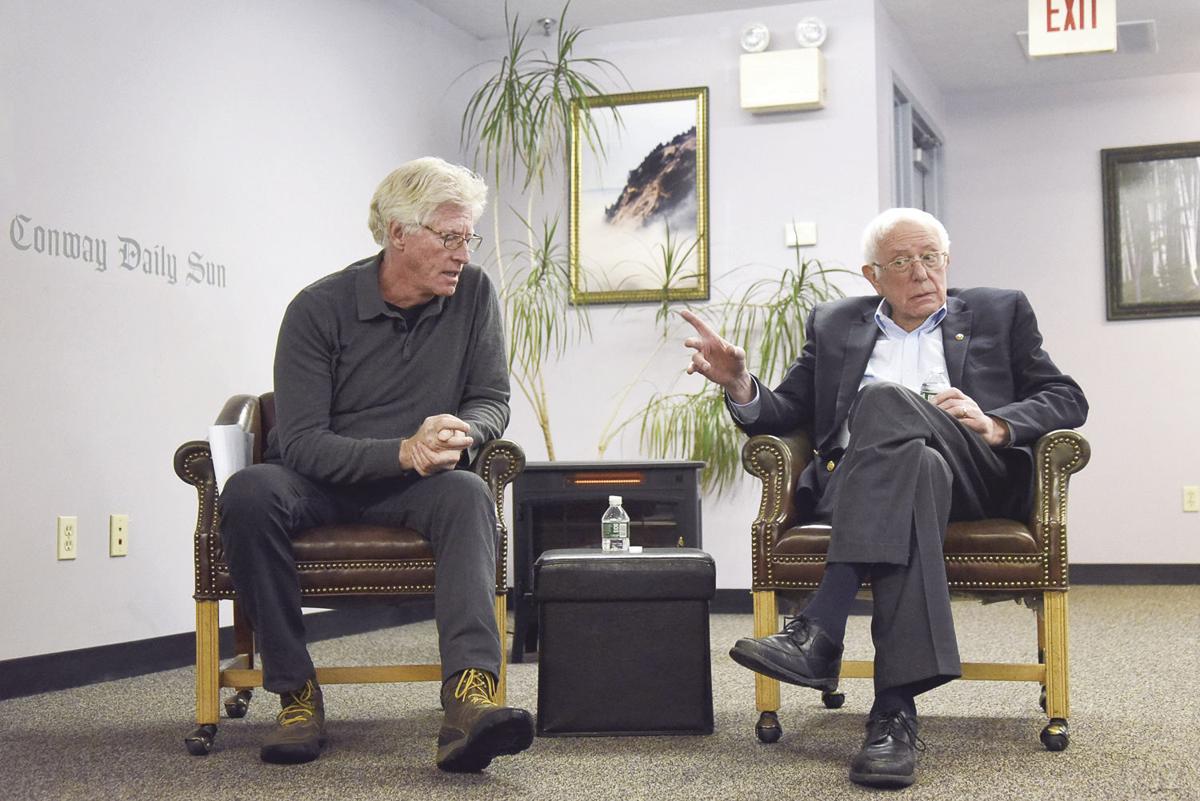 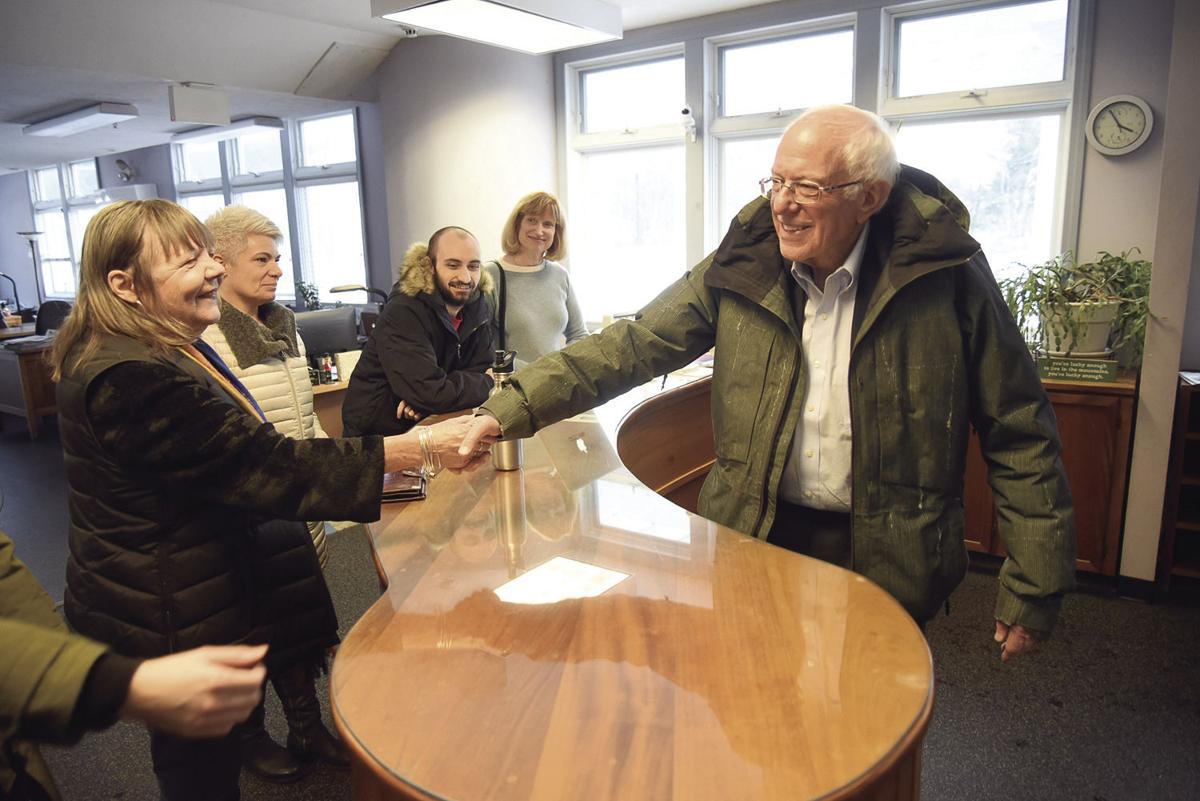 Democratic presidential hopeful Sen. Bernie Sanders (D-VT) shakes hands with Myfanwy Phillips, who was waiting to listen in on the editorial board interview at the Conway Sun office Sunday. (JAMIE GEMMITI PHOTO)

Democratic presidential hopeful Sen. Bernie Sanders (D-VT) shakes hands with Myfanwy Phillips, who was waiting to listen in on the editorial board interview at the Conway Sun office Sunday. (JAMIE GEMMITI PHOTO)

CONWAY — Fresh from a campaign rally at Tuckerman Brewing Co. in Conway Sen. Bernie Sanders sat down with the editorial staff of The Conway Daily Sun on Sunday afternoon to discuss how things have changed since he last ran for president in 2016 and how he will deal with the impeachment hearings looming this week.

The first thing out of the Vermont Democrat's mouth was to express his appreciation to the Granite State voters who elevated him over Hillary Clinton during the last presidential primary in 2016.

"I owe the people of New Hampshire a deep debt of gratitude," Sanders said.

"Well, we want a smashing victory here in New Hampshire," he continued. "And what that was about was not me. It was about people saying, you know what, maybe we should raise the minimum wage to 15 bucks an hour. Maybe health care is a human right. Maybe we should deal with climate change. Maybe we should make public colleges and universities tuition-free."

In the past two cycles, Sanders has faced a headwind from the national media, perceived as critical of his plain-spoken message, as well as the Democratic National Committee, which favored Hillary Clinton in 2016.

"The big newspapers out there, the big networks, you know, they are owned by very wealthy media conglomerates," he said. "By and large, they do not support my agenda. Now does that mean to say that all the media all the time is hostile? Absolutely not."

In 2016 in the N.H. Primary, Sanders bested Hillary Clinton in the popular vote by a margin of 60 to 38 percent. However, according to WMUR, many of the state's super delegates "ignored" the popular vote and therefore Clinton and Sanders had a tied delegate count of 16-16.

"We started the first campaign, before the first votes were counted in Iowa and New Hampshire, 500 delegates down," Sanders said, explaining he had to get about 2,382 delegates to win the nomination.

"It's like, you know, me running a 100-yard dash with you, and you're starting off at the 30-yard line. And that's absurd. My own view is, you know, we are the anti-establishment campaign."

This time around, Democratic Party rules have changed and now no candidate has a giant lead in delegates at the outset of the contest.

He then doubled down, saying: "I happen to think Donald Trump is the most dangerous president in the history of our country. He is a racist, sexist, homophonic and religious bigot."

Asked by Adam Hirshan, publisher of The Laconia Daily Sun, if he planned to recuse himself from a Senate impeachment vote against President Donald Trump, since Sanders is running against the president, the senator said he would not.
"I swore an oath to respect the Constitution," Sanders said, explaining his duty to vote as a senator. "Although I am disturbed that Sen. Mitch McConnell is not allowing us to hear all the witnesses' information, it is now my job to weigh the evidence."

Conway Daily Sun Publisher Mark Guerringue asked if, with the Iowa caucuses coming up Feb. 2 and the New Hampshire Primary less than two weeks later, "Do you plan to fly out at night to attend campaign events?"

Sanders said his campaign team has roughed out a schedule, "and we will plug in events as we have time. They (in Washington) can't even tell us how the long the damn trial is going to be. So we are going to do the best we can."

He added: "I wish I could spend more time in New Hampshire and Iowa."

Guerringue brought up the fact that fellow Democratic candidate Joe Biden has said he would be a one-term president if elected and asked if Sanders would consider doing the same.

Sanders said, "It absolutely depends on the circumstances, how things were going. But to go in as a lame duck president? The answer is no, I would not."

The Vermont senator also took some time to contrast his record with that of Biden.

Asked by editor Lloyd Jones what moments he is proudest of so far, Sanders replied, "I am proud of how we have changed the dialogue with the American people over the past four years about what is possible. A $15-an-hour minimum wage? Many states now have that. Tuition-free public university. It is an idea whose time has come. Medicare for all: A huge majority of people want that. And climate change. Four years ago, I was the only one saying it. Now it is the one thing on everyone's minds."

In August, podcaster Joe Rogan made headlines when he asked Sanders whether, as president, he would disclose information about UFOs, which has been a hot topic since 2017 when New Hampshire man David Fravor told The New York Times his story about chasing a Tic Tac-shaped UFO as a Navy pilot in 2004.

Sanders replied that his wife (Jane O'Meara Sanders) would "demand" that he disclose that information.

The Sun followed up by asking whether studying the Tic Tac could possibly lead to green technology.

"Let's not jump the gun!" said Sanders waving his hands and confirming he was familiar with news articles about Fravor and other pilots.

"Of course we have to explore that, if it is true," said Sanders stressing the Sun shouldn't quote him as being a full-fledged believer. "Presumably they are coming from a rather long distance away."

When Guerringue joked, "Thanks for writing our lede," Sanders let out a big belly laugh and clapped his hands.

For more, go to berniesanders.com