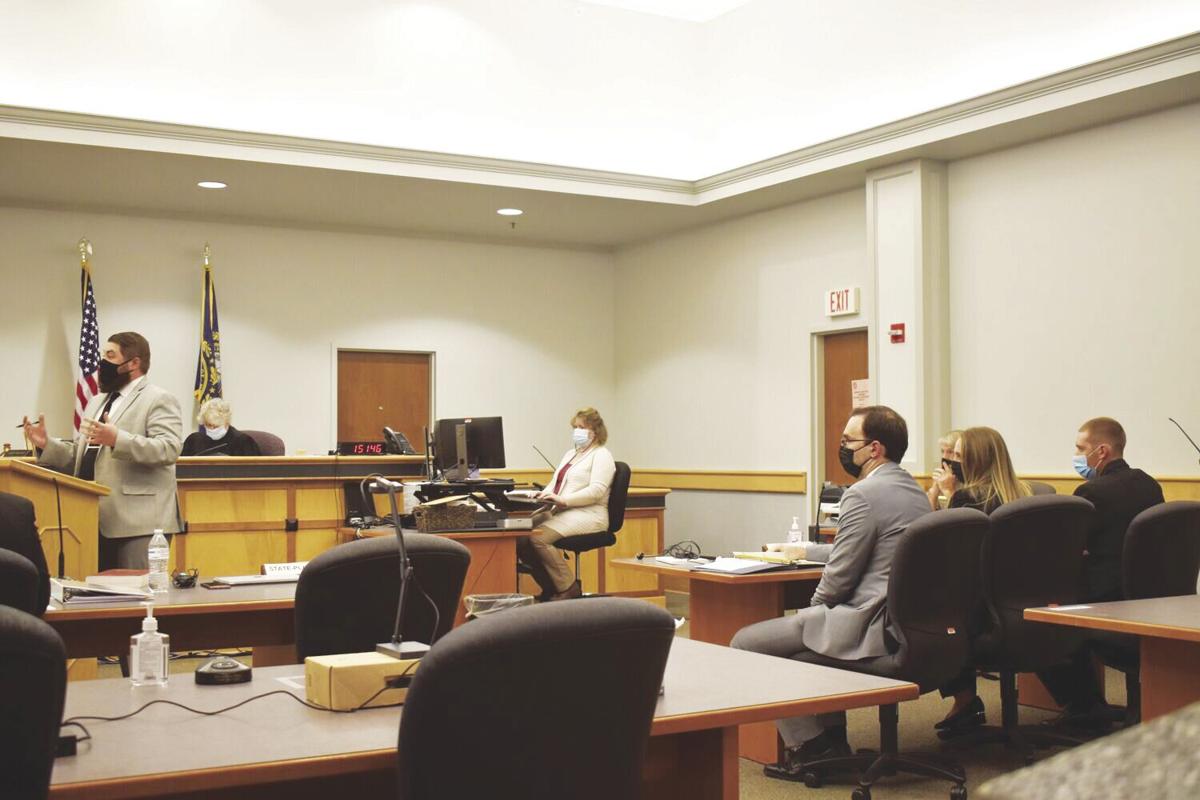 Assistant Carroll County Attorney Jeffrey Tynes makes closing arguments in the case of State v. Jonathan Ames on Tuesday. On the bench is Judge Amy Ignatius. At the defense table from left to right is public defenders Justin Littlefield and Rachel Melby and Ames, who was later found guilty. (DAYMOND STEER PHOTO) 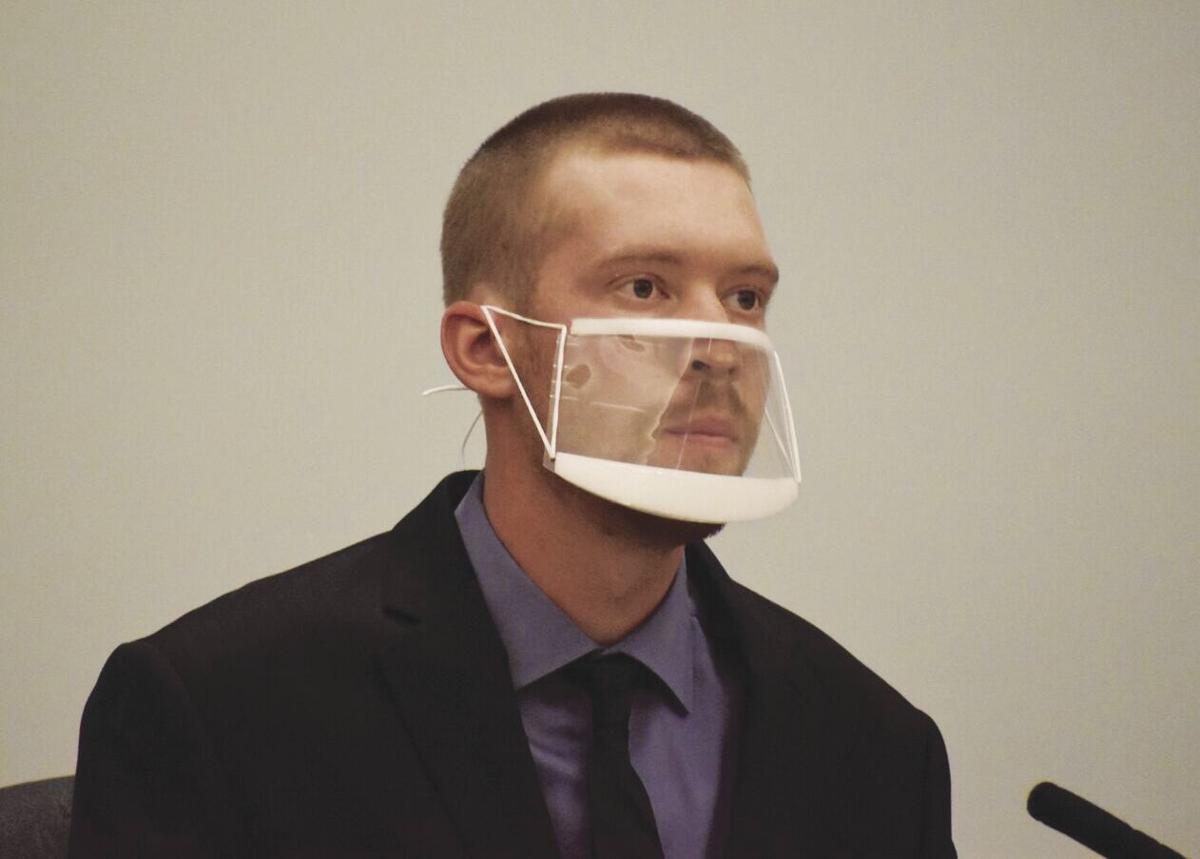 Jonathan Ames takes the stand in his own defense in an animal cruelty trial that took place in Carroll County Superior Court on Tuesday. (DAYMOND STEER PHOTO)

Assistant Carroll County Attorney Jeffrey Tynes makes closing arguments in the case of State v. Jonathan Ames on Tuesday. On the bench is Judge Amy Ignatius. At the defense table from left to right is public defenders Justin Littlefield and Rachel Melby and Ames, who was later found guilty. (DAYMOND STEER PHOTO)

Jonathan Ames takes the stand in his own defense in an animal cruelty trial that took place in Carroll County Superior Court on Tuesday. (DAYMOND STEER PHOTO)

OSSIPEE — A Carroll County Superior Court jury on Tuesday found an Ossipee man guilty of animal cruelty for shooting a dog that was staying at his then-home in North Conway.

In July 2019, Jonathan Ames, 25, of Ossipee was indicted on a Class B felony of animal cruelty for an incident that occurred in Conway on April 19 of that year.

According to the indictment written by then deputy county attorney Steve Briden, “The defendant, Jonathan Ames purposely beat, tortured or mutilated an animal; to wit, the defendant shot Ozzy, a medium-sized brown and white dog, in his face with a gun.”

“The defendant then abandoned Ozzy and drove off while Ozzy was suffering from significant pain,” the indictment read.

A jury of six men and six women found Ames guilty of a lesser misdemeanor shortly before 4 p.m. Tuesday. He was acquitted of the felony. He is to be sentenced Nov. 24.

The prosecutors at his trial were John Nehrings and Jeffrey Tynes. Ames was represented by public defenders Justin Littlefield and Rachel Melby.

The judge, lawyers and other court officers wore masks. Witnesses on the stand wore a clear mask so their facial expressions could be seen. However, some of the testimony was difficult to hear.

Ames took the stand Tuesday and admitted to shooting the dog but said it was in self-defense after the dog had bitten him.

Littlefield asked him why he shot the dog.

Unfortunately for Ames, the dog didn’t die immediately, and left a trail of blood from the driveway to the porch. Ozzy was taken to North Country Animal Hospital where he died.

The shooting took place at outside a North Conway home on Sidetrack Road where Ames lived with his fiancee and several children.

They had returned from a night of bowling in Fryeburg, Maine, and had company over that evening when the shooting occurred.

At the time, they had been caring for the dog for several months. Ozzy was owned by a man named Frank Mansfield.

Ames said that Ozzy had defecated on the floor of the home. He brought the dog over to the mess and gave Ozzy a spanking. Ames said his father had taught him this was how to train a dog.

The dog then bit him as he was trying to get him on a leash.

He attempted to bring the dog to his fiancee's truck but it was locked. So he put it in his truck. Ames said his intention was to keep the dog away from the people in the home.

Ames was asked if he remembered telling Mansfield that if he didn’t pick up the dog in five minutes he would kill it, but Ames said he didn’t remember ever saying that.

He said when he opened the door to the truck, the dog was about to attack him so he grabbed a gun kept in the truck door and shot the dog.

After getting shot, Ozzy flopped out of the car, said Ames, who explained as a deer hunter he was familiar with dead animals.

He drove to his mother’s house to seek medical attention as she is a nurse and he wanted to avoid a hospital bill.

Littlefield in his closing arguments said Ames had no intention to torture the dog as the state must prove. He said shooting the dog was clearly a snap decision during an event that transpired quickly. He pointed to the location of the shooting to make his point.

“That screams of an emergency, that makes it clear there was no premeditation," said Littlefield. "You don’t shoot an animal inside your car unless it's urgent."

Tynes gave the closing arguments for the prosecution.

He said Ames put the dog in the truck, then went back inside the house and announced that Mansfield had five minutes to retrieve the dog or else he was going to shoot it.

Ames, on the stand, said he didn't recall saying that.

Tynes reiterated in his closing arguments that Ames went back out to the truck, opened the cab door, retrieved the gun from the truck and shot the dog in the face and drove off without checking to see if the dog was dead.

The bullet inflicted “severe pain” on Ozzy and therefore Ames did torture the dog, said Tynes.

The prosecutor suggested that Ames could have simply left the dog in the truck and waited for Mansfield or called animal control or police as the dog wasn’t threatening anyone because it was in the truck.

“Instead of closing the door to contain the dog, he grabs the gun out of the door. He decided to shoot Mr. Mansfield’s dog. He didn't care if this dog lived or died. He put a bullet in this dog's face and fled the scene, abandoning the dog on the pavement.”