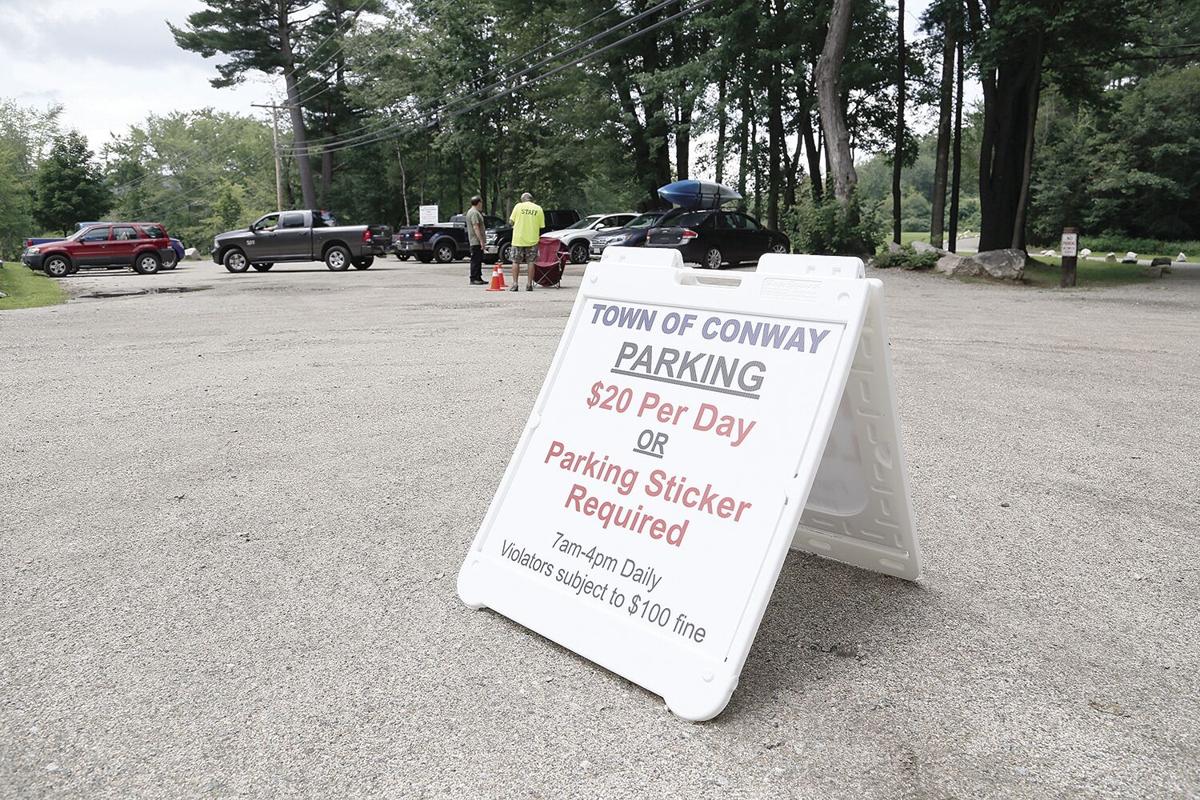 The parking lot at the First River Bridge Park, which has instituted paid parking for those without a town sticker for the summer. Trouble is many more people are parking for free along the road. (RACHEL SHARPLES PHOTO) 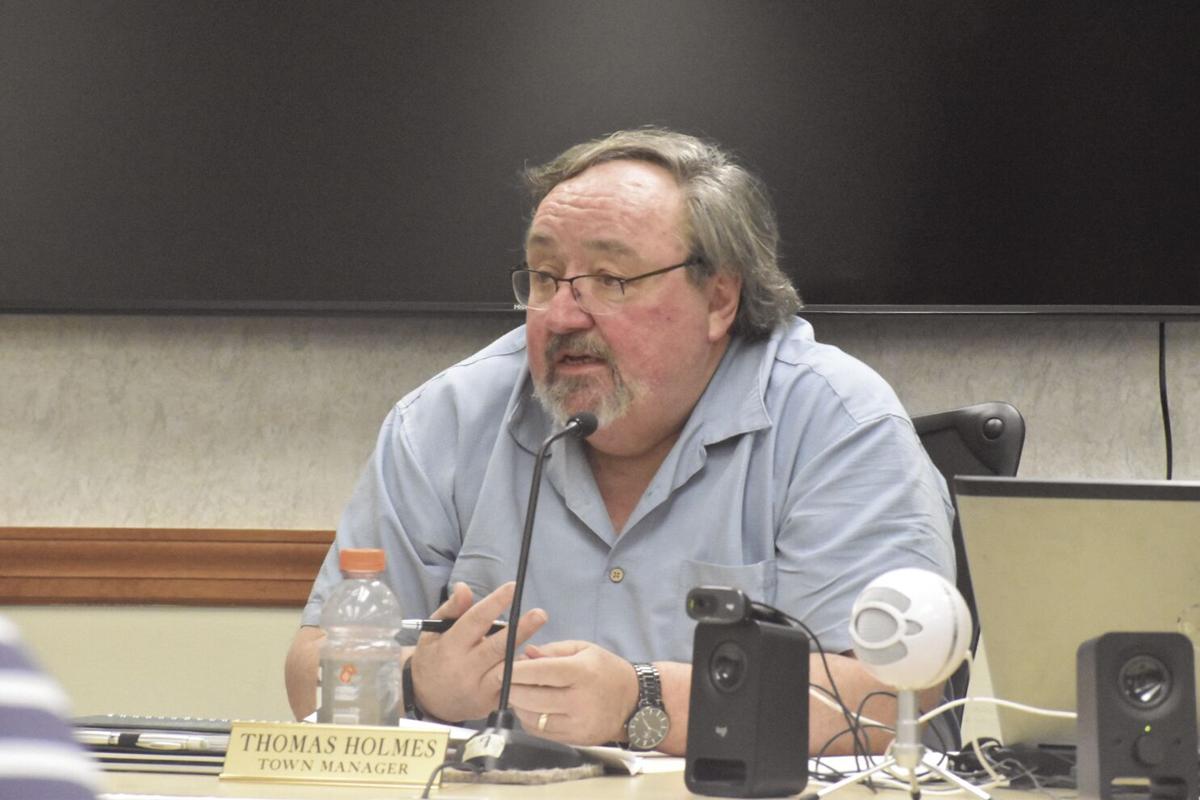 The parking lot at the First River Bridge Park, which has instituted paid parking for those without a town sticker for the summer. Trouble is many more people are parking for free along the road. (RACHEL SHARPLES PHOTO)

CONWAY — The town manager told selectmen Tuesday that the new paid parking program is losing money and he said he will be cutting attendants.

The paid parking program, which began Memorial Day weekend, is in now effect daily at First Bridge in North Conway, Davis Park in Conway and the Smith-Eastman Landing on Meeting House Road behind the Conway Police Station. All three are popular tubing and canoe put-ins.

Residents of Conway and Albany and second homeowners of those towns can park for free with a sticker, but all others have to pay $20 for the day.

Earlier this year, selectmen also voted to limit parking at Conway Lake to those with special stickers.

Selectmen discussed the parking program Tuesday, for which this is the inaugural year.

“We’re bleeding red,” said Town Manager Tom Holmes, adding the revenue shortfall could be due to bad weather on key holidays like Memorial Day and July 4, as well as last weekend.

“When we have that kind of weather on the weekend, we collect next to nothing and we’re paying four attendants $16 an hour.”

In addition, prior to the rain, there was a drought and the Saco River was running low, making it unattractive to tubers.

Selectman Mary Carey Seavey said the weather has been “horrendous.”

Holmes said the town has grossed about $16,000 or $17,000 from parking fees, while payroll for the attendants is $3,000 per week. There is a parking kiosk on Meeting House Road. Holmes said months ago the cost of the kiosk was about $8,000 and the town had to have signage made.

In addition, now that the livery services are running shuttles again after COVID restrictions were lifted, there are fewer cars at the kayak put-ins and people are finding free alternatives.

However, Holmes said a lot of locals have thanked the town for making it possible for them to enjoy the rec sites without having to deal with crowds.

“I’ve received nothing but positive comments from that segment of the population,” he said.

Rec Director John Eastman agreed that weather has been a factor. He said one sunny day he visited Davis Park and the lot was full with people who paid for parking, and that means the town made at least $500.

As a cost-cutting move, Holmes mentioned he’s eliminating the attendant Smith-Eastman and just leaving the kiosk. He is also cutting back on the other attendants’ hours.

Eastman said enforcement could be handled by having him or one of the remaining attendants periodically check on Smith-Eastman in the same manner they check on Conway Lake.

Holmes said selectmen next season should seriously consider having kiosks at the sites instead of attendants.

One issue they didn’t anticipate is that many people come to Meeting House Road to use the trails there instead of the kayak put-in. Those people don’t want to pay $20 just to go for a walk.

Holmes said they could reprogram the kiosk to accommodate those people by offering blocks of time rather than the full day only.

Selectman Carl Thibodeau said people have complained to him that there aren’t options for parking for less than a full day at Meeting House Road.

“They don’t want to pay $20 to be there for a couple of hours,” said Thibodeau, adding the number of cars parked along the road at First Bridge was also a topic of complaints.

On Wednesday, Holmes emailed the Sun to say they are going to change the rate at Smith-Eastman to $3 per hour. The rate at other sites will stay the same. Partial-day passes from the kiosk won’t be valid at the other sites.

As for First Bridge, Holmes said staff is thinking about how to handle that for next year.

Another possible idea to discuss for next year, said Holmes, is having discounted passes for residents of surrounding towns.

Holmes also talked about Conway Lake. He said it appears there is room for up to five vehicles with boat trailers in the parking lot there, and vehicles with trailers were not allowed in the lot. Those vehicles either had to park in the street or at Pine Tree School.

Boaters have complained about the distance between the school and the ramp making put-in in and takeout a cumbersome process.

“We’ve had several people approach the town,” said Holmes, noting that because vehicles with trailers were not allowed to park in the lot they were parking in the street and taking up the few available spots there.

Chairman David Weathers made a successful motion to allow for three vehicles with stickers and trailers in the parking lot, and it passed 4-1 with Thibodeau in the minority.

Thibodeau didn’t say why he voted no, but during the discussion he questioned the number, and that prompted Eastman to reiterate there was room for five.

The Sun asked if the town was making any other changes to parking.

“We are pulling the attendant from Meeting House Road and will rely on the kiosk and roving parking enforcement there,” said Holmes by email Wednesday.

TeleTalk question: How do you think the parking program is going so far?

Conway Town Manager Tom Holmes reported to selectmen this week that the new paid parking program is losing money and he is cutting attendants,…

The parking lot attendants had a summer position that lasted till the middle of July. Eliminating one and cutting hours is fiscally responsible but poor planning and forecasting on the Town’s part. I see a lot of decisions get made by Conway with little forethought or understanding of economics outside the immediate time we are in and vicinity of our location. Maybe these decisions should have budget committee approval in order to get the green light.

I have been vacationing in Conway for over 20 years, And now, with your short term rental ordinance and this whopping $20 BS to park, I fear Conway is getting hostile to the very people that make much of their business, the vacationers.

Good luck with that!