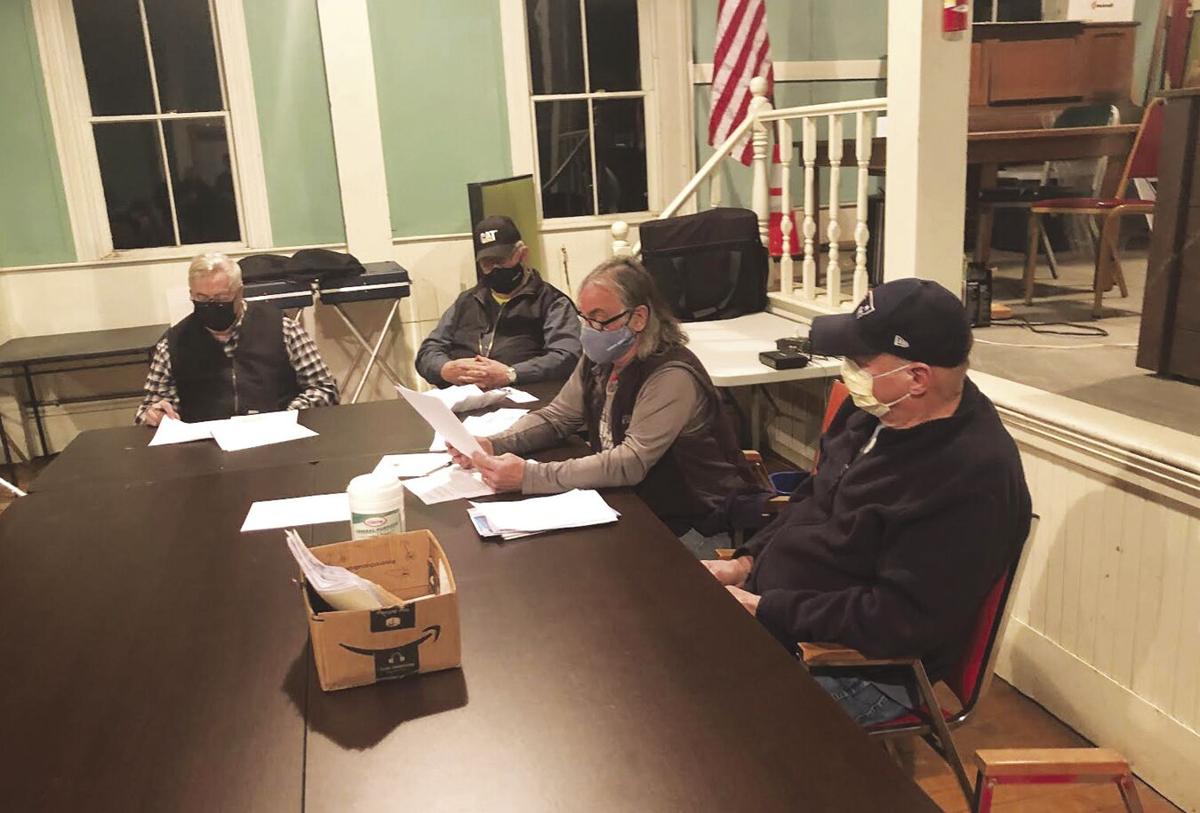 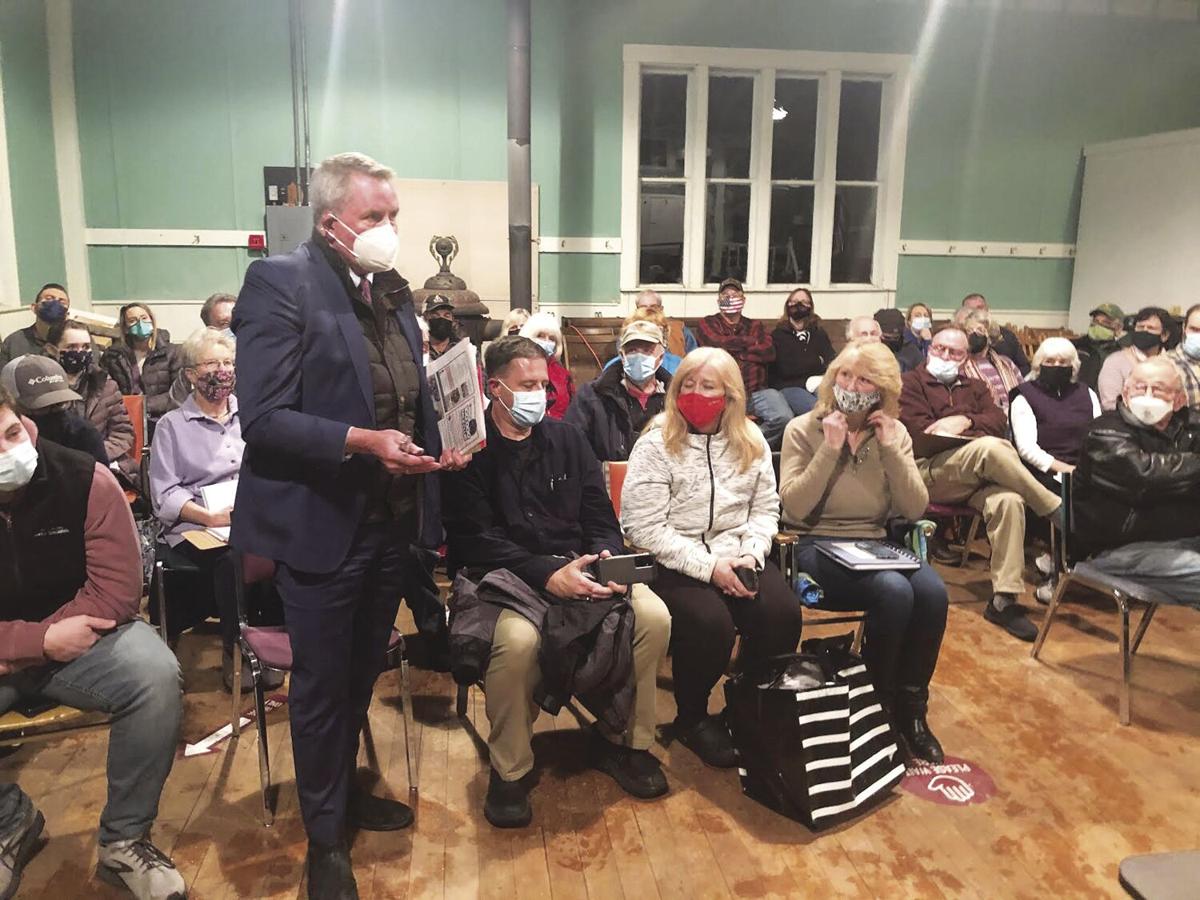 At Tuesday’s meeting, attorney Paul F. Driscoll of Norman Hanson and DeTroy, LLC, of Portland, Maine said that in a letter he wrote to the board, his clients, a group of residents, “urge the board to enact a moratorium on all solar generation facilities in Lovell until the town’s zoning ordinance can be adequately updated to address any solar facility of the size and scope proposed by Walden.” (TOM EASTMAN PHOTO)

At Tuesday’s meeting, attorney Paul F. Driscoll of Norman Hanson and DeTroy, LLC, of Portland, Maine said that in a letter he wrote to the board, his clients, a group of residents, “urge the board to enact a moratorium on all solar generation facilities in Lovell until the town’s zoning ordinance can be adequately updated to address any solar facility of the size and scope proposed by Walden.” (TOM EASTMAN PHOTO)

LOVELL, Maine — Although the Lovell Planning Board had voted earlier this month not to explore a moratorium on large-scale solar projects in town, at a well-attended meeting on Tuesday, Lovell selectmen voted 2-0 to draft such an ordinance.

A proposal from Walden Solar Maine III to build a 35-megawatt solar farm on private property in Lovell engendered much opposition from the public at a Dec. 2 planning board meeting, with abutters lamenting the unsightly look of the project.

The project would consist of two solar panel arrays on 177 acres of private property between Christian Hill Road and Shave Hill Road.

At Tuesday’s meeting at Lovell Town Hall, attended by close to 50 masked residents, selectmen scheduled a public hearing on the moratorium to be held Jan. 18 at the Lovell Fire Station at 7 p.m.

“We’re going to hold the meeting at the fire station because of the expected large crowd,” said Goldsmith.

However, when Goldsmith asked for public comment, there was little, other than from Drew, who said, “There was so much interest in the whole process, so many people at the last planning board meeting, that we felt the only prudent thing to do was to go ahead with the moratorium.”

That drew a round of applause from attendees.

Providing the only other public comment during the brief meeting was attorney Paul F. Driscoll of Norman Hanson and DeTroy, LLC, Attorneys at Law of Portland, Maine. He said that his firm represents Our Eden Association, a non-profit corporation whose “directors all reside or own property in Lovell.”

“We urge the board to enact a moratorium on all solar generation facilities in Lovell until the town’s zoning ordinance can be adequately updated to address any solar facility of the size and scope proposed by Walden,” wrote Driscoll in a letter to the board, a copy of which he gave to the press.

At the planning board meeting, resident Lynn Hurd said she was born and raised in Lovell and feels fortunate to have been able to enjoy Christian Hill’s beauty. She said she frequently sees drivers stop to take it in and take pictures.

“At present, there is talk that I will look down toward the mountains ... only to see a huge section of woods removed and an enormous mass of solar panels and whatever apparatus is involved in its place,” said Hurd.

After Tuesday’s meeting, she praised Goldsmith and Drew. “I was happy that they voted to have a moratorium. I don’t know a whole lot about politics, but I’m hoping, one step at a time,” she said.

On Wednesday, Goldsmith told the Sun that the selectmen had conferred in executive session at their Dec. 21 meeting with legal counsel James N. Katsiaficas of Perkins Thompson of Portland, Maine. Goldsmith said Katsiaficas drafted the moratorium document that was approved Tuesday.

“After getting the legal advice, we three selectpeople felt that the best thing to do is to put it out to the town and let everyone involved have a say,” said Goldsmith.

He said the planning board, which next meets Jan. 5, has not accepted Walden’s application and therefore the town’s legal adviser said the solar company would not be grandfathered in or exempt from any regulations should they be enacted.

“Of course who knows in litigation about all of this,” said Goldsmith.

Goldsmith said the next step would be to hold the public hearing on Jan. 18. Following that, a special town meeting would be held on Jan. 25.

“If they vote for the moratorium at the special town meeting, the town is allowed 180 days to work with different groups to come up with some kind of wording (regarding solar) to fix it with a new ordinance. Then it goes back to another public hearing,” said Goldsmith.

After that, he said, “Then another special town meeting would be held to approve the new ordinances which would probably relate to solar ordinances.” He said the moratorium was effective as of Tuesday’s meeting.

The document approved says a moratorium is necessary “to allow a reasonable amount of time for the town to analyze and plan properly for development of large-scale solar energy system”; and selectmen “intend to engage a planning consultant to prepare draft zoning ordinance and comprehensive plan amendments as necessary.”

It continues: “The select board intends to engage a planning consultant to prepare draft zoning ordinance and comprehensive plan amendments as necessary to regulate large-scale solar energy systems, and the planning board and code enforcement office would study those drafts and the zoning ordinance and comprehensive plan to develop appropriate amendments to address large-scale solar energy systems, which amendments would receive public hearing and would be offered to the select board for town meeting action.

In addition: “It is anticipated that such a study, review and development of recommended zoning ordinance and comprehensive plan amendments will take at least 180 days from the date the town enacts the moratorium.”

Because solar isn’t in the town ordinances, the planning board must look at the most closely similar entity that is listed.

Planning board members said if they could, they would change that rule somehow to give themselves more latitude.

A consultant for Walden suggested that the array is similar to a telecommunications facility.

Walden Solar’s project summary says the panels will create carbon-free, affordable electricity supply for over 9,500 Maine homes. The power will be sold to Central Maine Power at about 3.7 cents per kilowatt hour. The overall project life is 40 years. A 600-page application has been posted to Lovell’s website, lovellmaine.org, as has the moratorium document.

Thank you Lovell selectmen for the moratorium. Lovell is a destination with wonderful scenery, wildlife, and people. Hopefully, the Lovell residents will come together to take the time and care to plan for Lovell's long-term future. The following 2 videos celebrate life in/around Lovell. https://www.youtube.com/watch?v=TTkn4ASKvS4