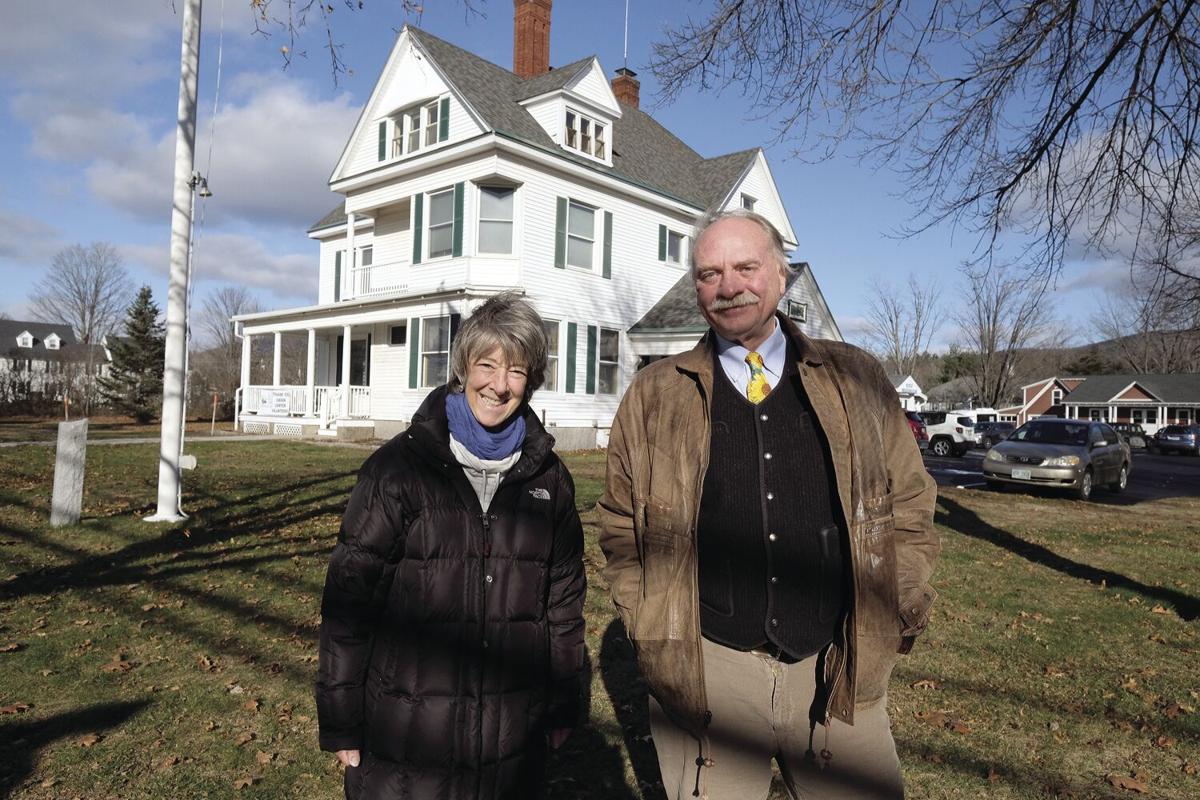 Marianne Jackson and George Cleveland are seen in front of the Gibson Center for Senior Services in North Conway on Wednesday. Cleveland is stepping down after 20 years as executive director of the center. Jackson will serve as interim director. (JAMIE GEMMITI PHOTO) 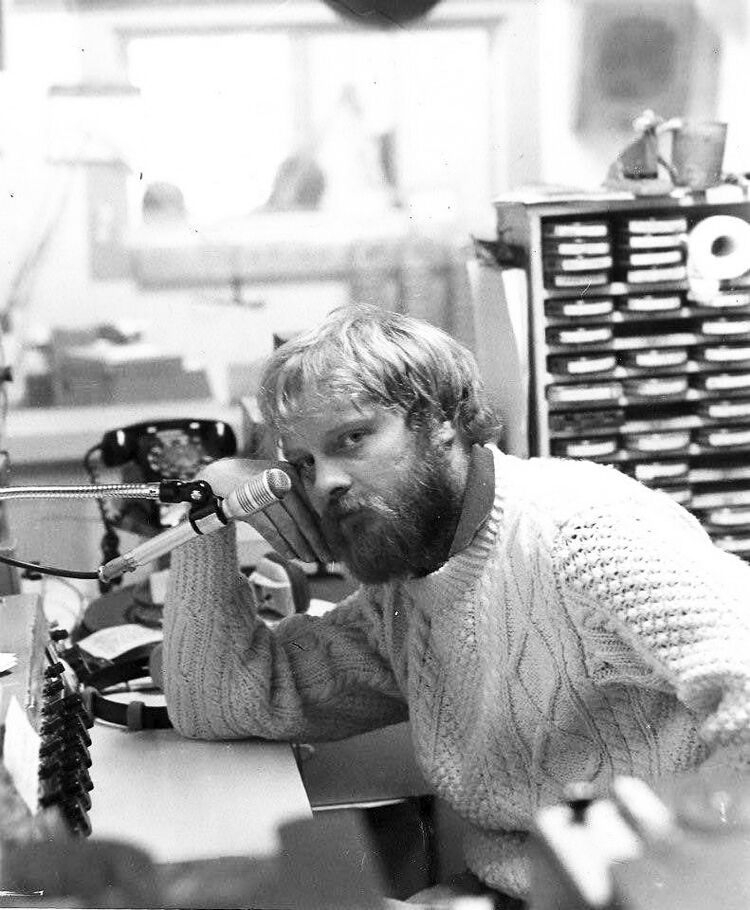 DJ George Cleveland is seen during his early days at WMWV 93.5-FM, where he worked for many years before becoming executive director of the Gibson Center. (FILE PHOTO) 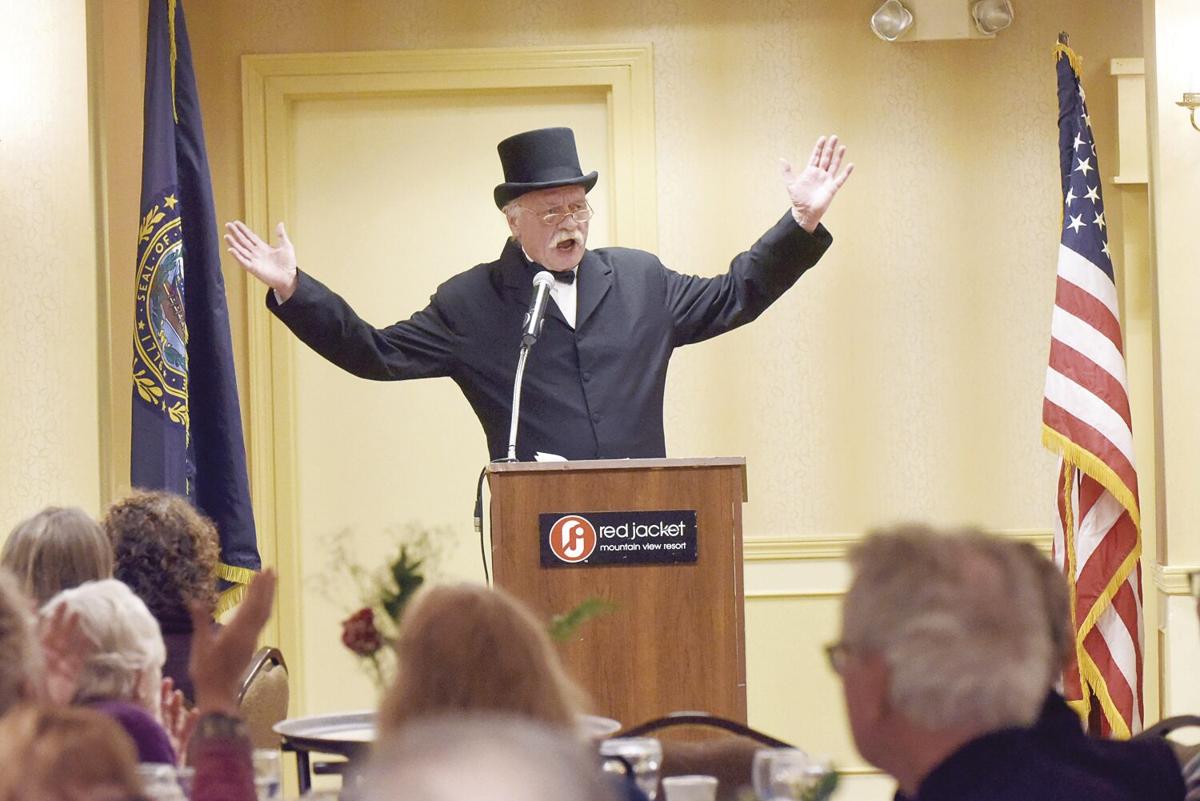 George Cleveland makes a speech in character of his grandfather Grover Cleveland during the Democrats' annual fundraising dinner at the Red Jacket in 2019. (JAMIE GEMMITI PHOTO)

Marianne Jackson and George Cleveland are seen in front of the Gibson Center for Senior Services in North Conway on Wednesday. Cleveland is stepping down after 20 years as executive director of the center. Jackson will serve as interim director. (JAMIE GEMMITI PHOTO)

DJ George Cleveland is seen during his early days at WMWV 93.5-FM, where he worked for many years before becoming executive director of the Gibson Center. (FILE PHOTO)

George Cleveland makes a speech in character of his grandfather Grover Cleveland during the Democrats' annual fundraising dinner at the Red Jacket in 2019. (JAMIE GEMMITI PHOTO)

CONWAY — George Cleveland is not retiring — he just says that come Jan. 1, he's stepping down from a 20-year gig as executive director of the Gibson Center for Senior Services of North Conway.

His letter of resignation was accepted by the Gibson Board Finance Committee Tuesday.

Tapped to serve as interim director by incoming board president Barbara Campbell and the committee was Dr. Marianne Jackson of Madison, a board member and co-chair of the Gibson Center’s Age-Friendly Mt. Washington Valley initiative.

Cleveland will continue to provide guidance as needed.

The Finance Committee expects to put together a search committee in December to secure a permanent executive director in 2021, according to Campbell, who on behalf of the committee, thanked Cleveland for his years of service, noting, “George has provided tremendous guidance, consistent wisdom, wonderful creativity and enthusiasm.”

Cleveland said he is grateful for having been able to make positive changes for the center.

“I am not going anywhere — for now. But I am entertaining several options. All doors are open. It’s just time after 20.5 years to let new blood to come in,” Cleveland said Wednesday at the center, where staff had just finished a second day of offering Thanksgiving meals through its “grab and go” program after the popular daily lunches were discontinued in March due to the pandemic.

“I feel it’s time for someone fresher to come in,” said Cleveland, who was a radio personality at local station WMWV 93.5-FM in Conway before succeeding the late Paul Lodi as executive director at the Gibson Center in August 2000.

He said he applied for the post because he was familiar not only with the needs of the center but also of many of the other non-profit organizations in the valley, having interviewed many of their directors for WMWV’s “Drive Time” show over the years.

Then-Gibson board members Ken Cargill of Tamworth and Bob Murphy of Silver Lake said they were struck by Cleveland’s positive energy and force of personality that set him apart from the rest of the field, despite his lack of managerial experience.

“I was having those thoughts and kept them to myself, but then I turned to Bob, and he said pretty much the same thing, that George could do this, that he could learn the rest,” Cargill said this week.

Said Macomber, “Nothing ever seemed to faze George — he has always remained upbeat and easy to work with.”

Echoed Fauver, “George has a marvelous sense of humor, and more than once he rallied the board during a tense moment.”

Added Wroblewski, “His humor, wisdom and grace will always stand tall in my memories. And as for Marianne, she has been a member of our finance committee for three years and has been nothing short of energizing in her contributions.”

Grandson of Grover Cleveland, the nation’s 22nd and 24th president, whom he strongly resembles and personifies for Democratic Party gatherings, Cleveland has continued Lodi’s approach of making the Gibson Center a vital part of the community – bucking the stereotype of a senior center as being “just a place for old people.”

“We like to say that 90 is the new 60,” laughed Cleveland. “Yes, it’s a place for our seniors, but all ages are welcome. This is not God’s waiting room; there is lots of fun stuff going on here – Jill Reynolds always has lots going on. And, before COVID, our daily lunches were an active part of everyone’s lives."

According to Cleveland, the center’s main goal is to combat a widespread malady: loneliness.

“That is the common underlying goal of every single movement we do here,” said Cleveland.

Since the pandemic hit, everyone, especially seniors, have become more isolated, and Cleveland said Gibson staffers have been sure to keep tabs on its clientele as a complement to the Conway Police Department’s “Project Good Morning’” daily welfare checks.

Among Cleveland’s achievements during his tenure at the Gibson has been the acquisition of the Silver Lake Landing for senior housing in 2005.

Another was the $600,000 acquisition and renovation of the adjoining former Thelma Kenison home next to the Gibson Center on Grove Street, which was transformed about a decade ago into the center's thrift shop (known by some as the Unique Boutique).

Another achievement was the raising of funds for a new transportation van, which is expected to be delivered next March.

Interviewed this week, Jackson — a retired physician — said she is sorry Cleveland lis eaving but feels energized to step into his shoes, for however long.

“Carroll County is the oldest county in New Hampshire, and New Hampshire is the second oldest state in the nation with over 30 percent of our population over the age of 65," she said.

"We have just adopted a new mission statement with the input of every staff person and our board members. We are looking forward to continue to work together to make the Gibson Center the preeminent senior center in the state and to be able to serve seniors and all generations, where all seniors are welcomed and where everyone meets their maximum potential.”