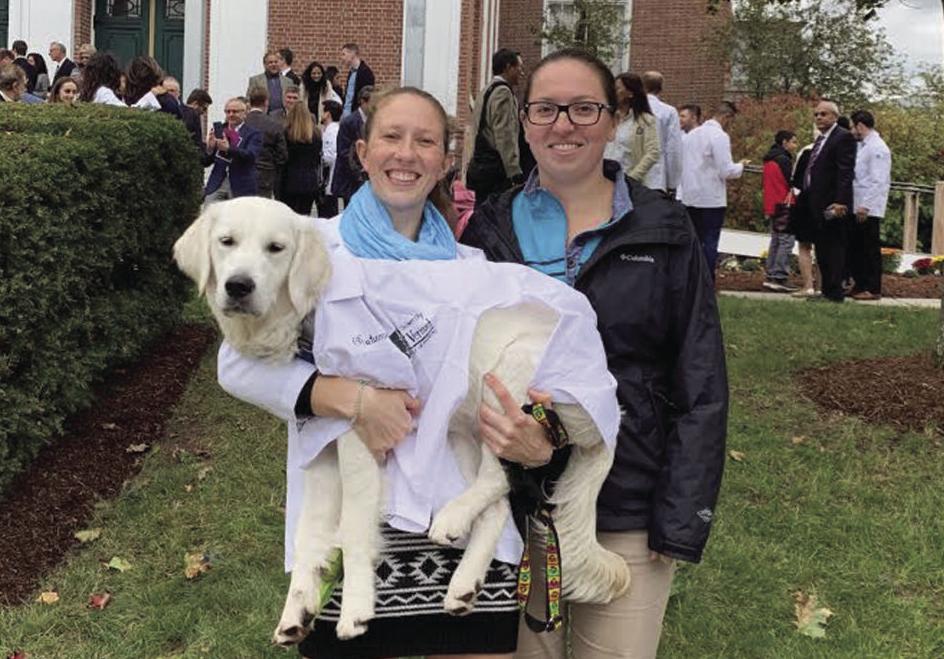 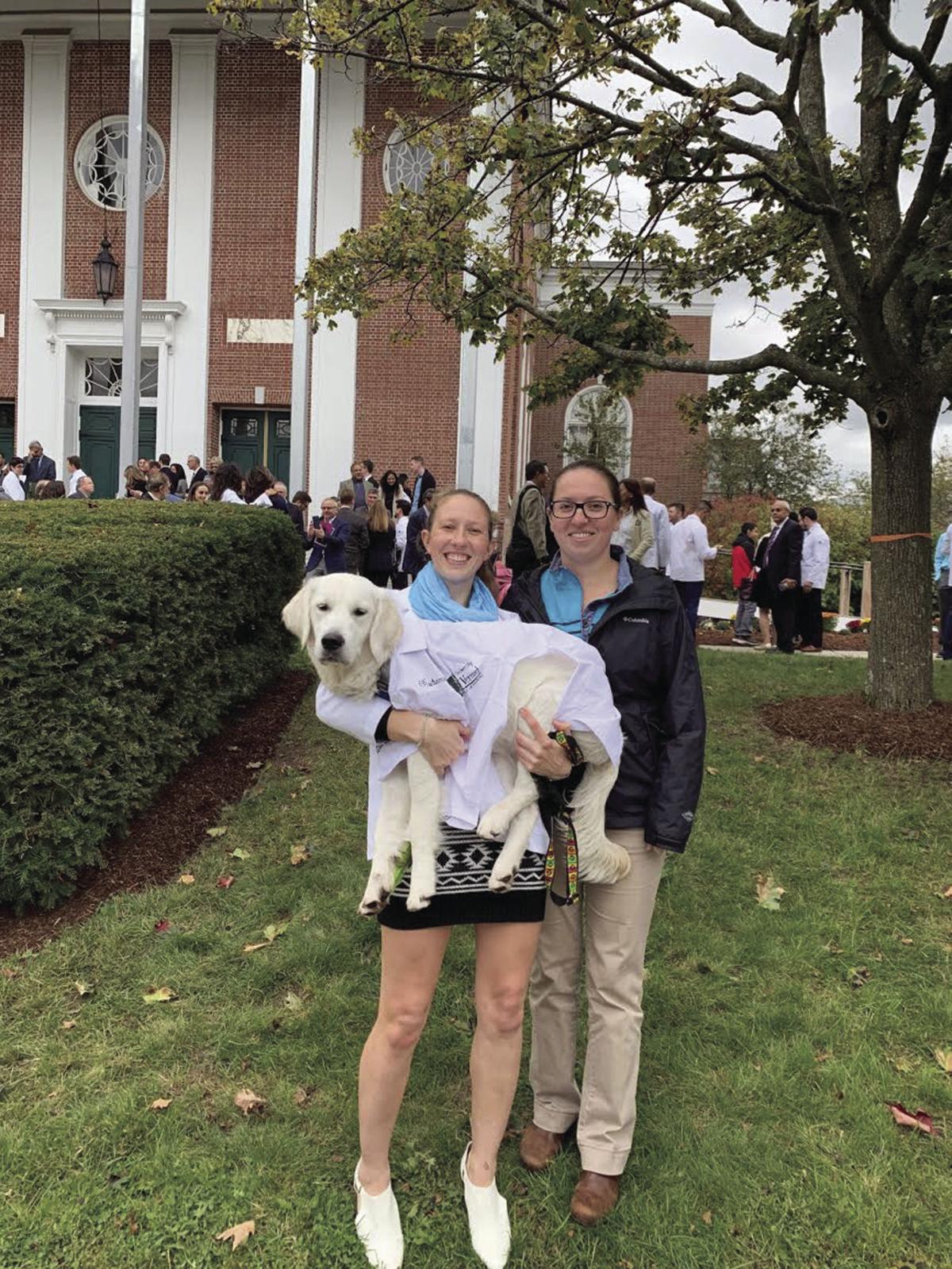 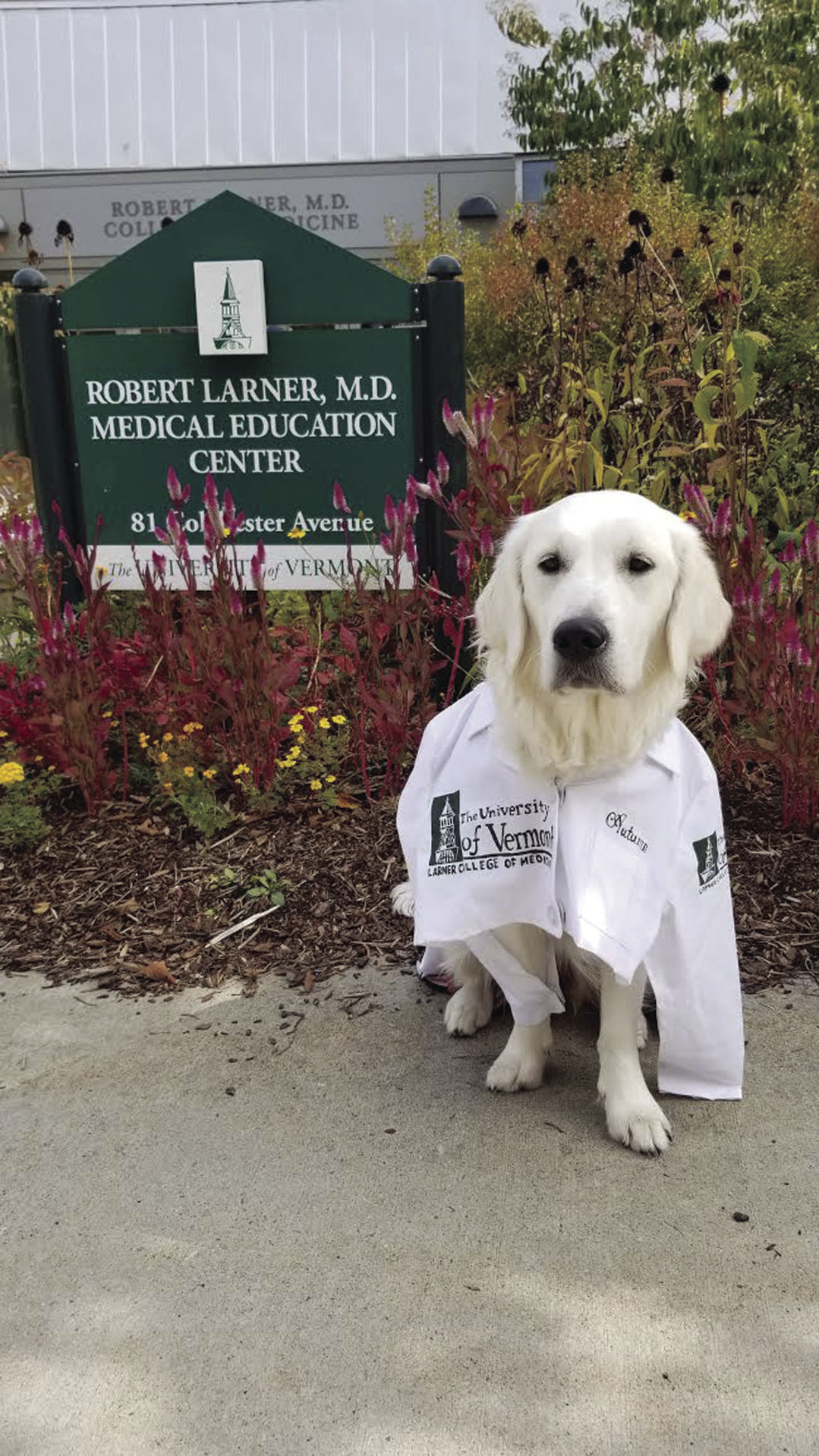 Autumn, who is attending medical school at the University of Vermont with her handler Lara Murnik, is shown modeling the special white coat made for her by Murnik. (COURTESY PHOTO) 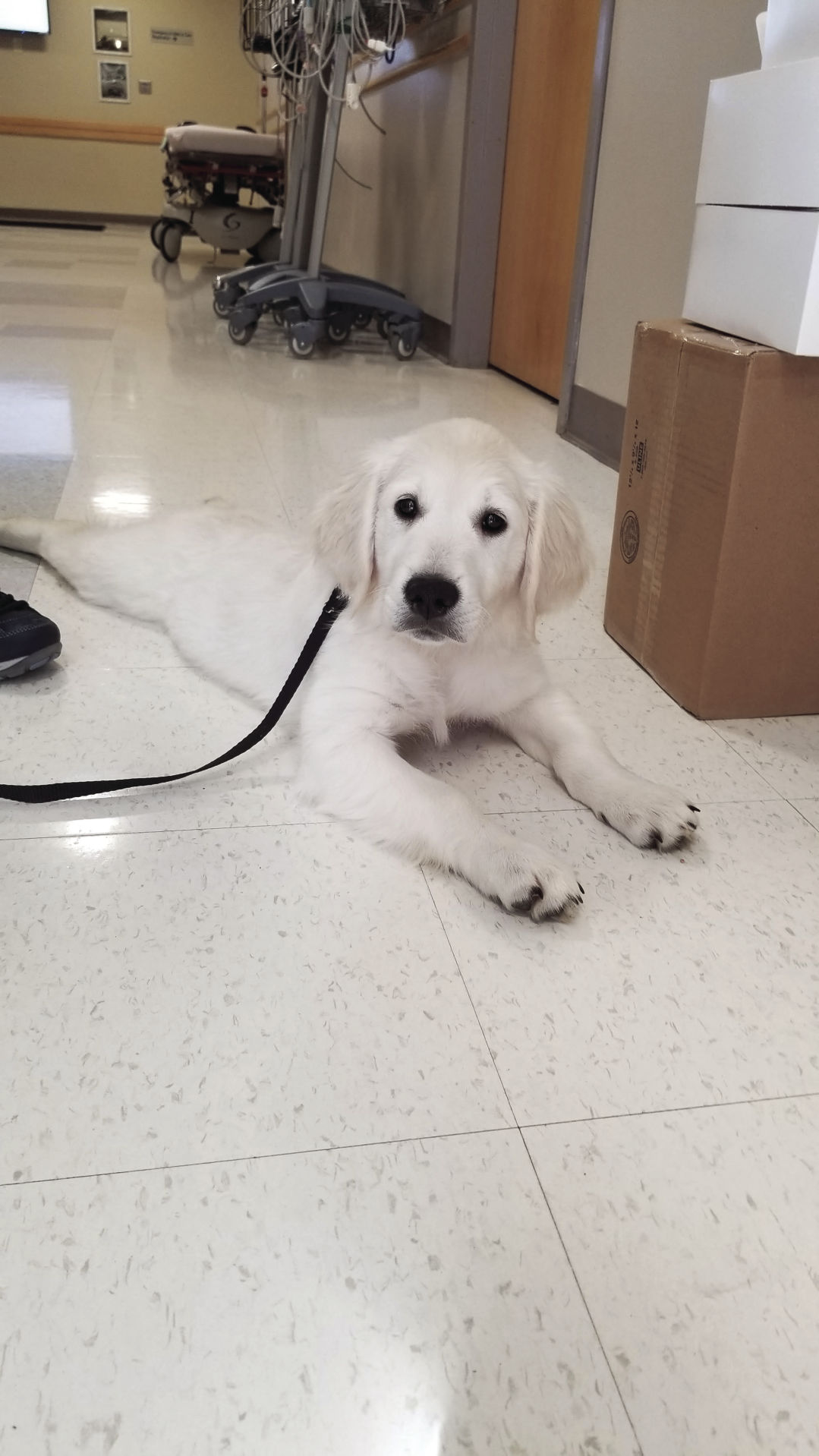 Autumn, who is attending medical school at the University of Vermont with her handler Lara Murnik, is shown modeling the special white coat made for her by Murnik. (COURTESY PHOTO)

CONWAY — A Kennett High graduate and the Little Angels of Bartlett service dog she is fostering are attending medical school together.

Lara Murnik, 24, of Bartlett, a 2014 graduate of Kennett, is in her first year at the University of Vermont’s Larner College of Medicine in Burlington, Vt.

Her service dog in training, Autumn, is a 9-month-old English cream golden retriever that is part of the Little Angels Service Dogs facility in Bartlett. Her mother was from Little Angels' breeding program and her father was part of Salty Dogs of Jackson owned by Scott and Lynn Saunders.

Last Friday was a big day for Lara, Autumn and family.

“Lara and Autumn both participated in the ‘White Coat’ ceremony at UVM’s medical school last week,” said Susan Carrette of Bartlett, mother of both Lara and her sister, 2011 Kennett High graduate Haley Murnik, 26, who works as a surgical ICU nurse at Dartmouth-Hitchcock Medical Center in Lebanon.

Both avid hockey players when they’re not seeing to medical matters, Lara and Haley obtained their EMT training from SOLO Wilderness Medicine School in Conway and have worked for Bartlett-Jackson Ambulance since the age of 17.

Lara graduated in 2018 from the University of New England in Maine with a bachelor of science in pre-med studies, and Haley – a 2012 KHS grad – obtained her nursing degree in 2014 from Colby Sawyer in New London.

Carrette said the white coat ceremony is held to welcome all first-year medical students into the field.

“It’s when they go up on stage and get their white medical jackets and then everyone takes the Hippocratic Oath,” said Carrette, a former counselor in the mental health field.

Although Autumn already wears a natural fur white coat, Lara said she crafted a small canine white coat for the dog to don for the ceremony. “She looked very professional!” beamed Lara.

When she was brought up on stage to get her coat, “One dean held Autumn’s leash and the other deans patted her,” said Lara’s mom, Susan.

Carrette and her former husband, Rick Murnik, father of both Haley and Lara, attended Friday’s ceremony, as did Haley and other friends.

Rick Murnik is executive director of the Bartlett-Jackson Ambulance Company.

“I think it’s great that Autumn and Lara are attending school together,” said Murnik, noting that Lara had also brought Autumn on ambulance training as she and Haley both have worked for the Jackson-Bartlett Ambulance as EMTs. “These service dogs need to be around people, and the more exposure they get, the better it is. It is good for them to experience different things. There is another graduated service dog on the UVM campus who is also from Mount Washington Valley (from the Assistance Canine Training Services program in Fryeburg, Maine), so it’s neat to think there are two service dogs on the UVM campus, one in training and the other a graduate of A.C.T.S., and they both come from the valley.”

Autumn has become something of a rock star at the medical school, according to Lara and her parents.

“The professors take Autumn when Lara is testing. Autumn turned 9 months old this week, and Lara turned 24. I just think it’s a great story how both Lara and Haley, both Kennett High graduates and local girls, are both doing well in their chosen fields, and a nice hook is having Autumn there with Lara,” said Carrette.

She said she and Autumn were brought together seven months ago when she paid a visit to Little Angels.

“I went down to Little Angels (located at the former Sky Valley Motel off Route 302) last March. So, I reached out as a member of the medical community (as a member of the Bartlett-Jackson Ambulance Service) because it’s good for the dogs and the medical community to interact. I ended up coming home with a 12-week old dog: Autumn!” laughed Lara in a phone interview Tuesday from school, where she had just finished two anatomy exams earlier that day.

“She is wonderful," said Lara of her constant canine companion. "She is such a good girl; she loves kids and she is so smart.”

Little Angels, based in San Diego, Calif., and since last November, also in Bartlett, trains service dogs as does A.C.T.S. It's motto is “Changing Lives, One Dog at a Time.

Josh Drew of the L.A. Drew family of Intervale serves as general manager. He is assisted by his mother, Darlene Drew, a service dog recipient as well as family contact/fundraising coordinator, younger brother and service dog recipient Ryan Drew and their staff of four full-time and one part-time trainers.

Currently, Little Angels has about 35 dogs on site in Bartlett, and has graduated two dogs, pairing them with partners. Their San Diego campus has about 65 dogs.

Lara said Autumn has become an unofficial but beloved mascot for her medical school classmates.

“After the white coat ceremony,” she said, “many parents were coming up to tell me that they had heard all about Autumn from their kids and how glad they were to finally get to meet her!”

Lara said she and Autumn live off-campus and make the mile-and-a-half walk in to school every day, making for a good round of exercise for both.

She said she asked permission from the UVM medical college deans to bring Autumn with her to medical school. They agreed that it would be a good experience not only for Autumn and Lara, but also for students as a way to get used to working with patients who own service dogs, or who can benefit from their interaction with the highly-trained animals.

“When I first got Autumn, I assumed it would be a temporary arrangement for a few months,” said Lara, whose family has always had dogs when she and Haley were growing up. Once they had two golden retrievers, a Gordon setter, a black Labrador retriever and a German shepherd all at the same time. Suffice it to say, her family loves dogs. “I did not assume either that UVM would allow me to bring her with me or that Little Angels would want one of their dogs in training to leave the valley. But they were both very accommodating and it has proved to be a great learning experience for everyone.”

Josh Drew of Little Angels agreed, saying that Lara is a good foster handler and that the experience has been a boon for all involved.

He said service dogs end their training after about 18 months and are then assigned to a client.That's always tough for the handler/trainer to let go, but it is part of the exercise.

“Lara has been an amazing foster handler for us. She works very hard and she is incredible with her dog,” said Drew. “We are incredibly grateful for all she is doing, donating her time, training Autumn. Having Autumn in such a learning environment is wonderful as it helps her to be socialized in different settings. She knows that in time, as with all service dogs in training, she will have to give Autumn up, but she is a trooper, she really is.”

Lynn Saunders of Salty Dogs said she is proud to be part of Little Angels. "It's a great program, and I'm very happy to hear about Autumn and Lara's going off to school together," she said this week.

"The University of Vermont is committed to providing equal access to its facilities and programs for individuals with different abilities in compliance with institutional, state and federal policies and laws. This includes individuals who use service animals, who are accompanied by a service animal in training, and for students or employees who require an emotional support animal as a reasonable accommodation. Autumn is a welcomed member of our Larner College of Medicine community."

For more information about service dogs, go to littleangelsservicedogs.org or assistancecanine.org.