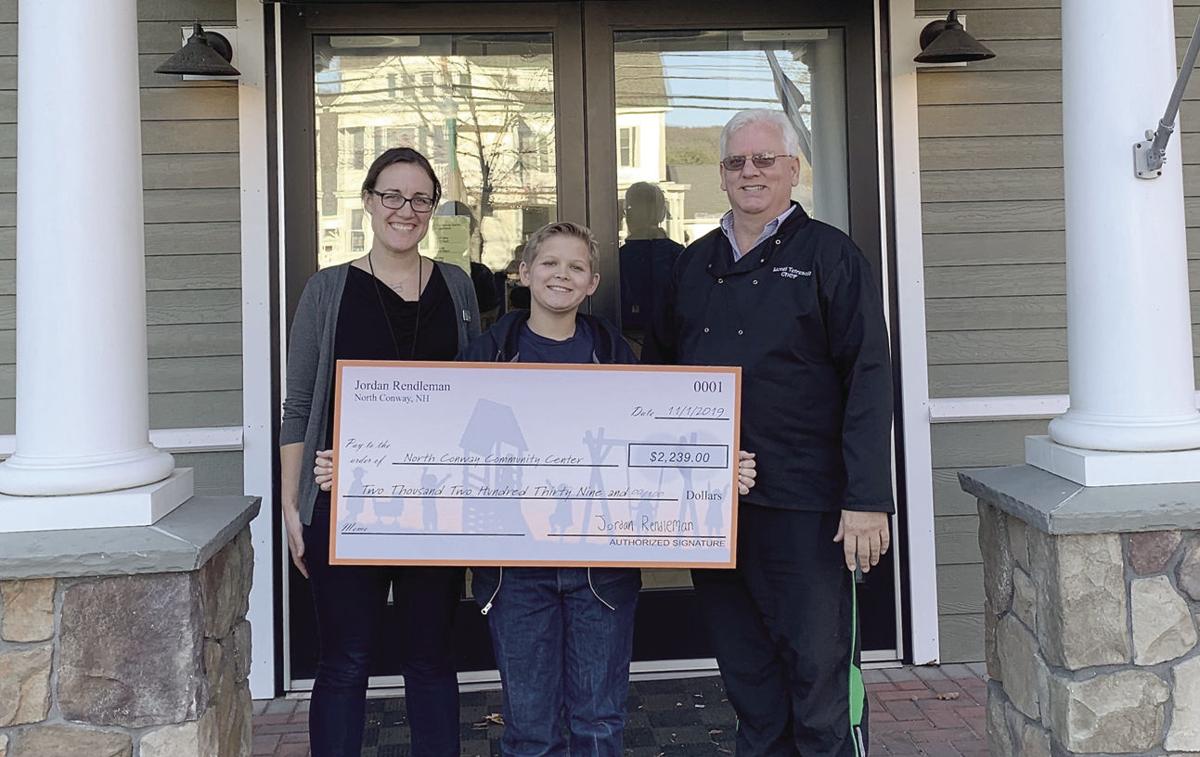 Jordan Rendleman, 13, of North Conway, wants to make the playground at the North Conway Community Center wheelchair and handicapped-accessible for all children. Last week he and friend Lionel Tetreault (right) presented a check to Carrie Burkett, general manager of the community center. (COURTESY PHOTO) 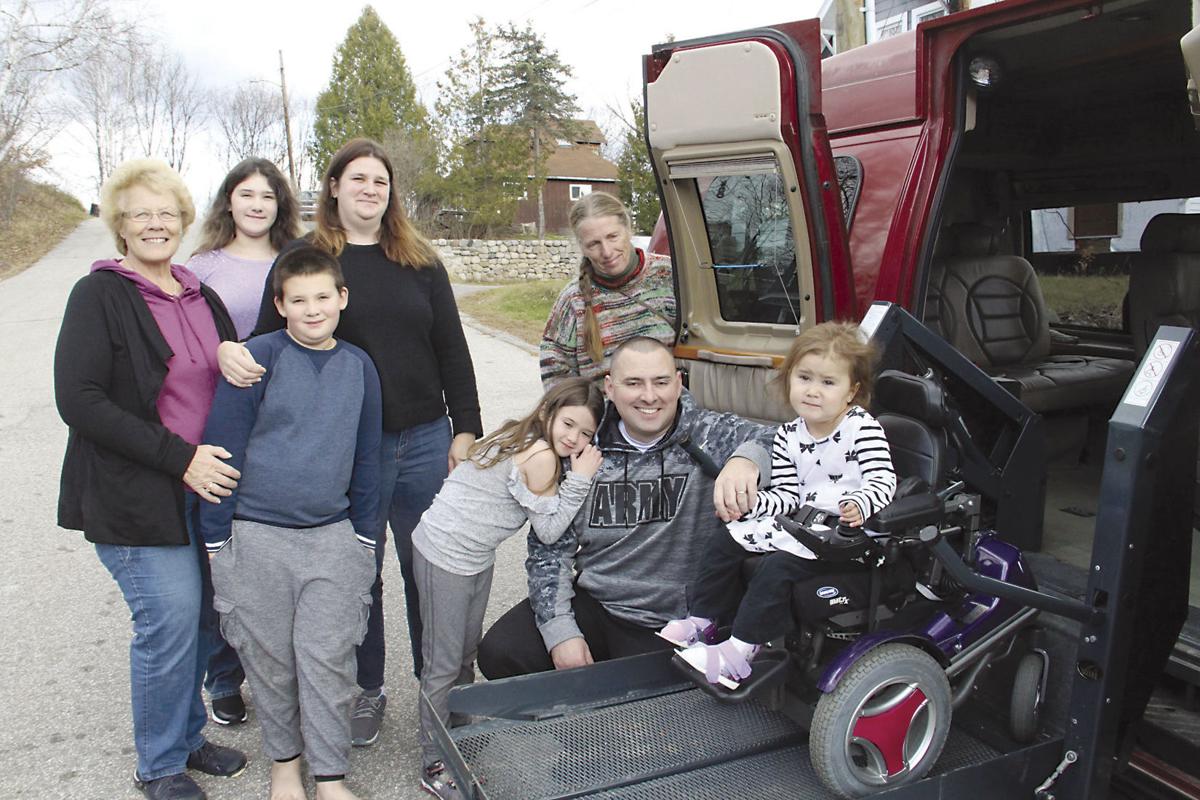 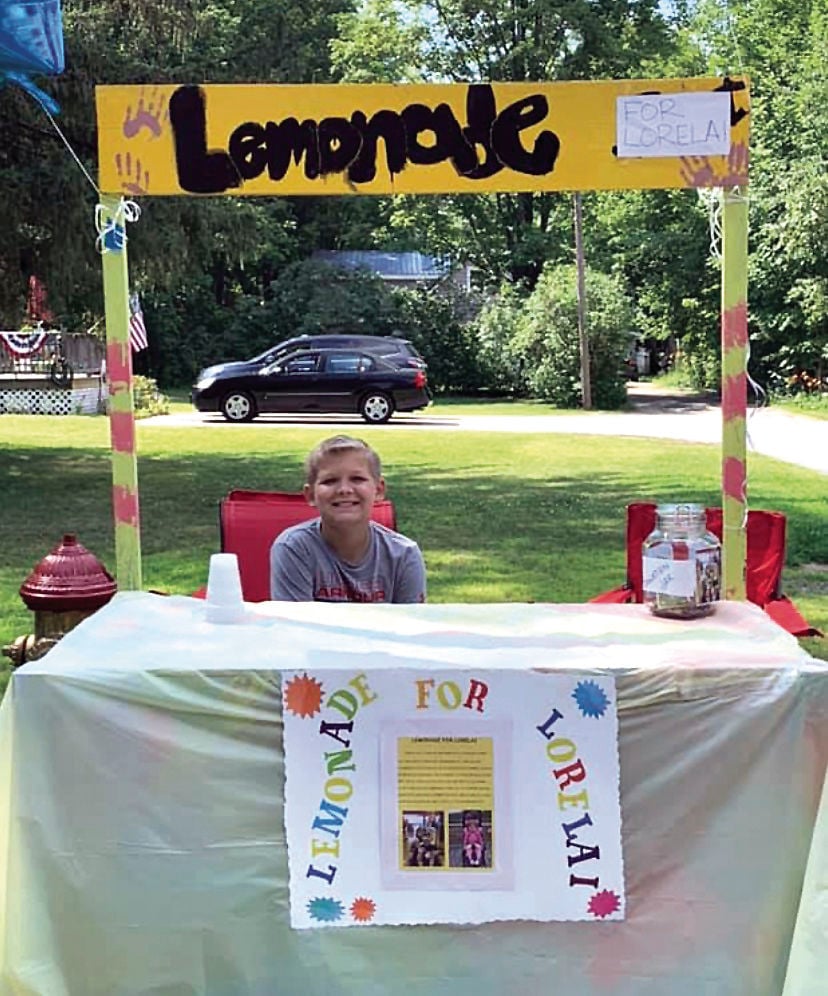 Jordan Rendleman, 13, of North Conwaran a lemonade stand over the summer to raise money for handicap-accessible equipment. (COURTESY PHOTO) 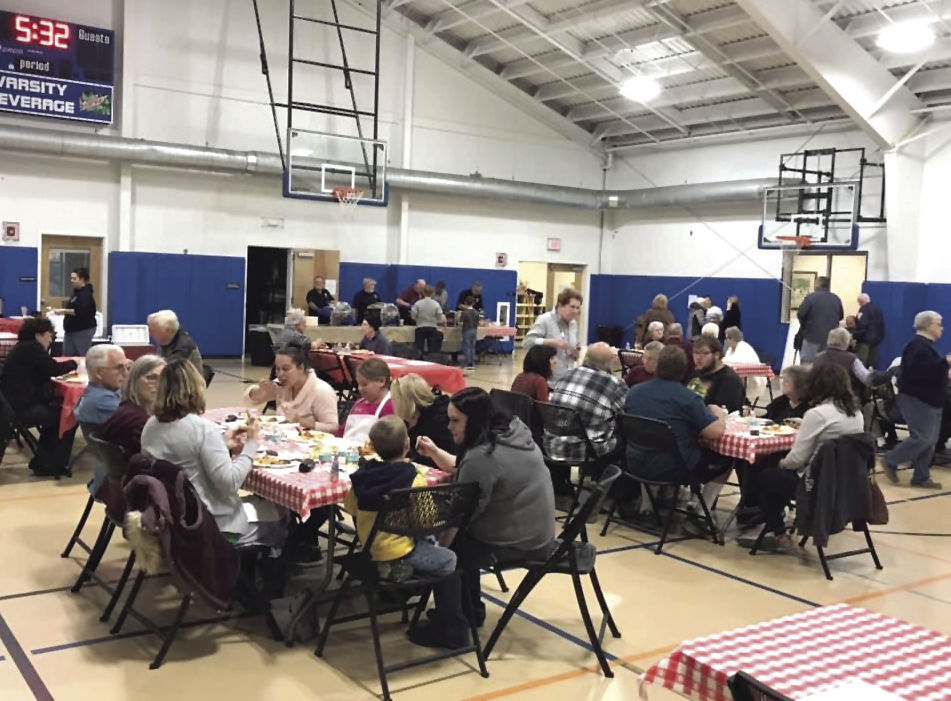 Jordan Rendleman, 13, of North Conway hosted a spaghetti dinner at the center this summer to raise funds for the equipment. (COURTESY PHOTO) 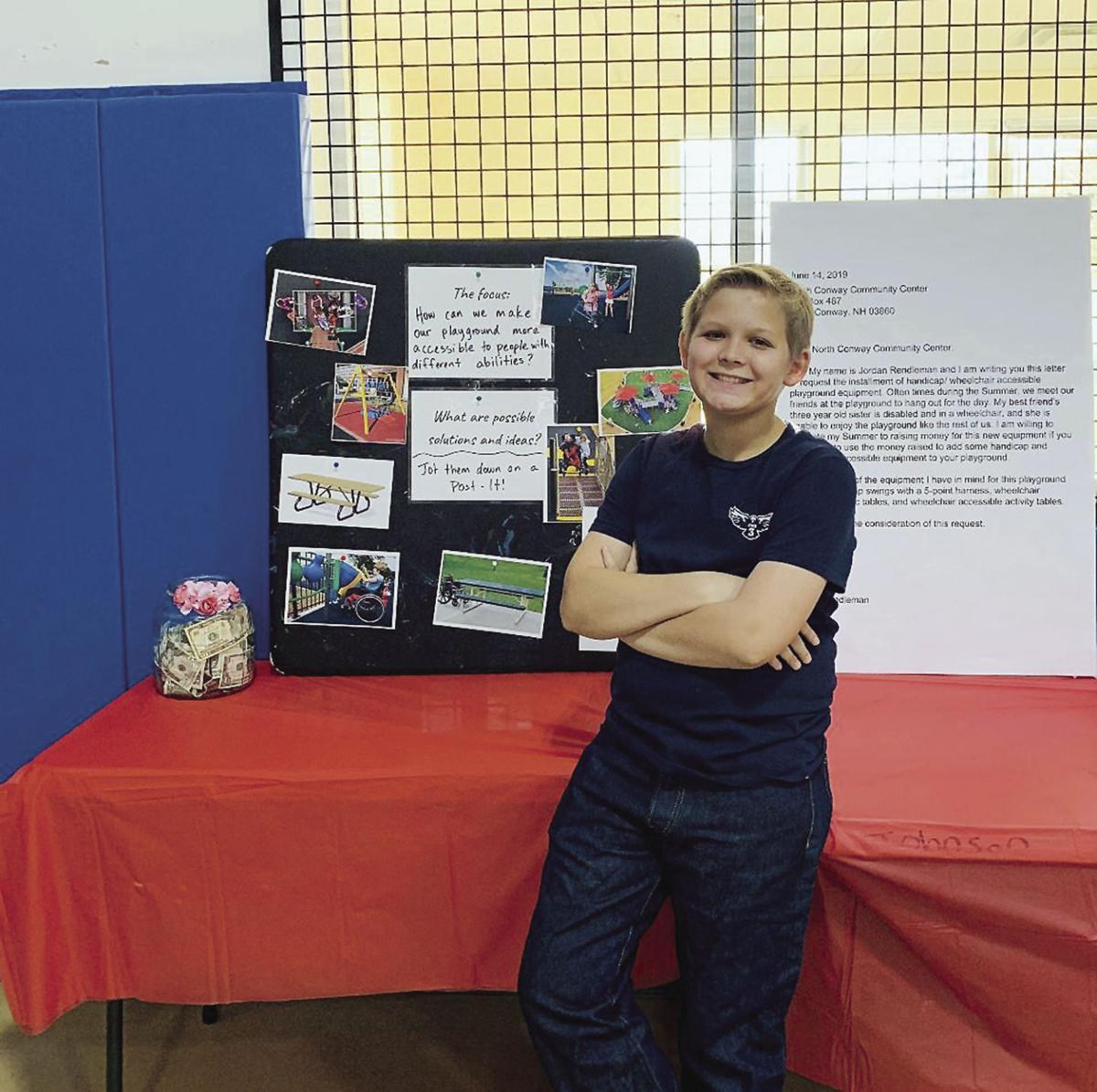 Jordan Rendleman, 13, of North Conway, wants to make the playground at the North Conway Community Center wheelchair and handicapped-accessible for all children. (COURTESY PHOTO)

Jordan Rendleman, 13, of North Conway, wants to make the playground at the North Conway Community Center wheelchair and handicapped-accessible for all children. Last week he and friend Lionel Tetreault (right) presented a check to Carrie Burkett, general manager of the community center. (COURTESY PHOTO)

Jordan Rendleman, 13, of North Conwaran a lemonade stand over the summer to raise money for handicap-accessible equipment. (COURTESY PHOTO)

Jordan Rendleman, 13, of North Conway hosted a spaghetti dinner at the center this summer to raise funds for the equipment. (COURTESY PHOTO)

Jordan Rendleman, 13, of North Conway, wants to make the playground at the North Conway Community Center wheelchair and handicapped-accessible for all children. (COURTESY PHOTO)

CONWAY — Jordan Rendleman wants to make a difference in the world, and is starting out by trying to do something for his community.

The local teen has been working to raise funds to make the playground area at the North Conway Community Center handicap/wheelchair accessible for kids like 3-year-old Lorelai Priest of Berlin, who would love to play with her siblings and friends.

To achieve that goal, Jordan, 13, son of Melissa and Tee Rendleman of North Conway, ran a lemonade stand this summer and, with the help of family friend Lionel Tetreault, also put on a memorable spaghetti dinner June 12 at the North Conway Community Center.

On Nov. 1, Jordan presented a check for a whopping $2,239 to Carrie Burkett, the community center's general manager.

“Jordan is good friends with Lorelai’s (13-year-old) sister, Libby, since they were babies,” Jordan's mom said.

“We’d always meet up at the park or playground. Jordan would see Lorelai unable to use the playground, and he said it’s not fair that she and others with disabilities could not enjoy the playground like everyone else, so he took it upon himself to make a difference.”

The eighth-grader who attends Kennett Middle School started a lemonade stand and whenever he had an opportunity over the summer manned it, calling it “Lemonade for Lorelai.”

“Oftentimes during the summer, we met our friends at the playground to hang out for the day," Jordan wrote. "My best friend’s sister is disabled and in a wheelchair, and she is unable to enjoy the playground like the rest of us.

“I am willing to dedicate my summer to raising money for this new equipment if you are willing to use the money raised to add some handicap- and wheelchair-accessible equipment to your playground."

Some equipment he had in mind was a five-point harness, wheelchair- accessible picnic tables and a wheelchair-accessible activity table.

Tetreault learned about Jordan’s mission and immediately offered a helping hand. The North Conway resident works for Sysco Foods and loves to cook.

"Jordan is a remarkable young man,” Tetreault said. “Here’s this 13-year-old kid actually doing something positive in a world that seems to be getting increasingly negative. You won’t many 13-year-olds as wonderful and caring as Jordan.”

Tetreault said he saw what Jordan was doing and wanted to join the team.

“You know me, I know a lot of people, and I can cook (formerly at The Nestlenook in Jackson). I said, ‘Let’s come up with a dynamite spaghetti dinner.'"

He said the dinner got rave reviews. "I had one woman come up to me and said, 'When I saw at the chunks of tomatoes and garlic, I knew it was a real sauce.'”

The Our Lady of the Mountains Council No. 7575 of the Knights of Columbus learned of the dinner and contacted Tetreault to volunteer their support.

“I can’t thank the Knights of Columbus enough,” he said. “I’m very happy to be a part of this, not because I work for Sysco, but my grandson and granddaughter play in that playground. I want to bring the community center back to being a true community center.”

He added: “Melissa (Rendleman) and her dad (Craig France) are both on the North Conway Fire Department, and once other departments learned what Jordan was trying to do, donations came in from firehouses in New Jersey and New York.”

Burkett said she was impressed with Jordan and said the community center wants to do its part to help.

“It was really this great, organic process,” she said by phone Tuesday of the fundraising effort.

“Jordan, he visited the park with a friend whose little sister couldn’t access the park. Lionel found out about what Jordan was trying to do and got excited about helping, and it became one of those amazing third-party fundraisers where the community stepped up.”

She added: “Jordan started the momentum, and we intend to pick up on it and are in the process of thinking of ways we can step up.”

“We’re thinking about how we can use this momentum,” she said.

Burkett was happy to see the center host the spaghetti dinner.

“Lionel was great to see in the kitchen,” she said. “The whole building smelled delicious with the smell of garlic. It was so nice to see so many families and seniors come out — it was the quintessential community center moment — kid starts fundraiser; local guy pitches in; and the community responds.

"This is one of those great projects that has community support. I’m excited to see where it goes.”

The community center has a donation page on its website — northconwaycommunitycenter.org/donate.

The fundraising for the playground equipment will continue with a turkey dinner in the works for the near future.

“Jordan’s younger brother Ryan said to me, ‘Lionel, can we do another dinner?’” Tetreault said.

“I said kiddingly, ‘Yes, and I’m going to dress you up as a turkey.’

"He’s actually looking forward to dressing up. He doesn’t have to do that, but I’m serious about another dinner.

He added: “To think this all started with a 13-year-old wanting to do something nice. We need more Jordans in the world.”