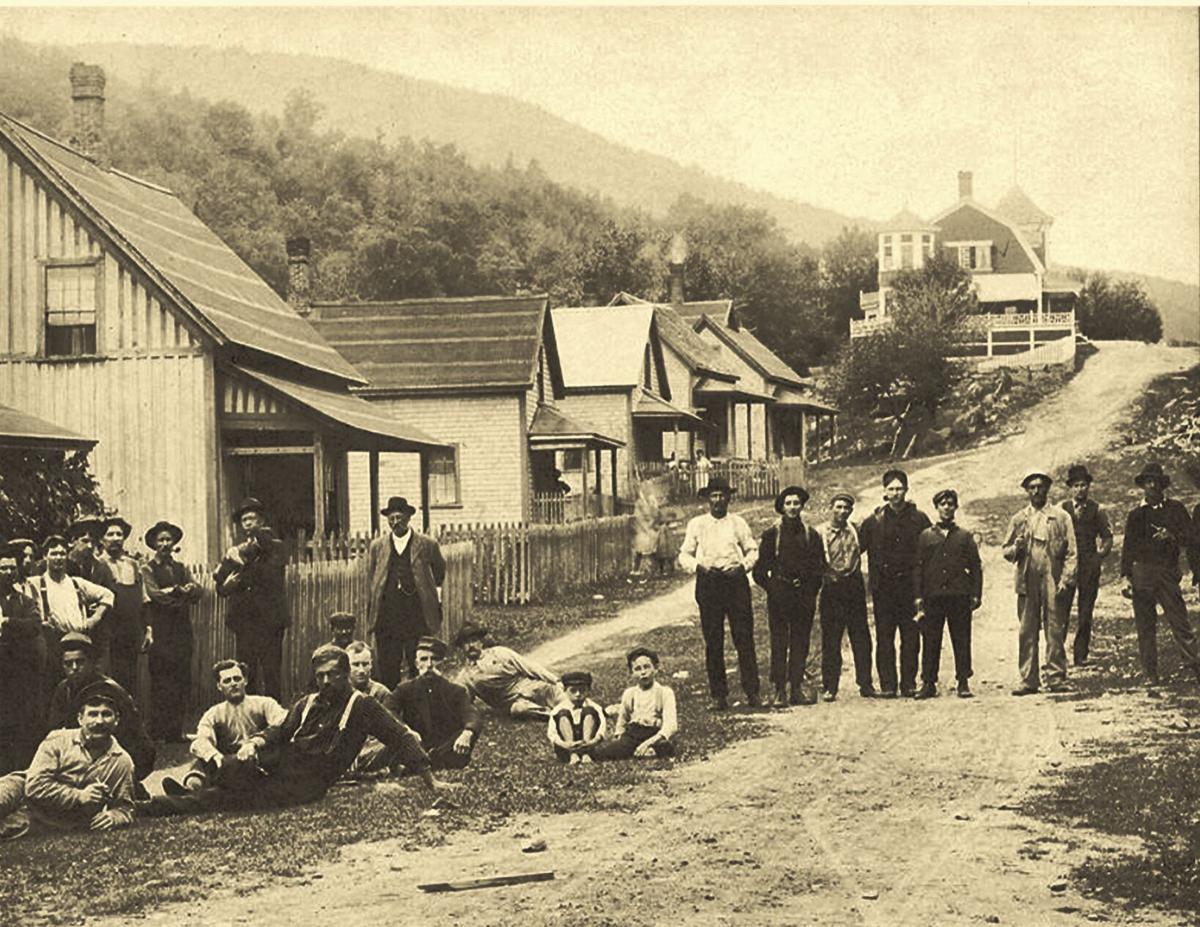 In the Sawyer River Valley of Crawford Notch, there was once a bustling timber town called Livermore that has, quite simply, vanished. (COURTESY PHOTO) 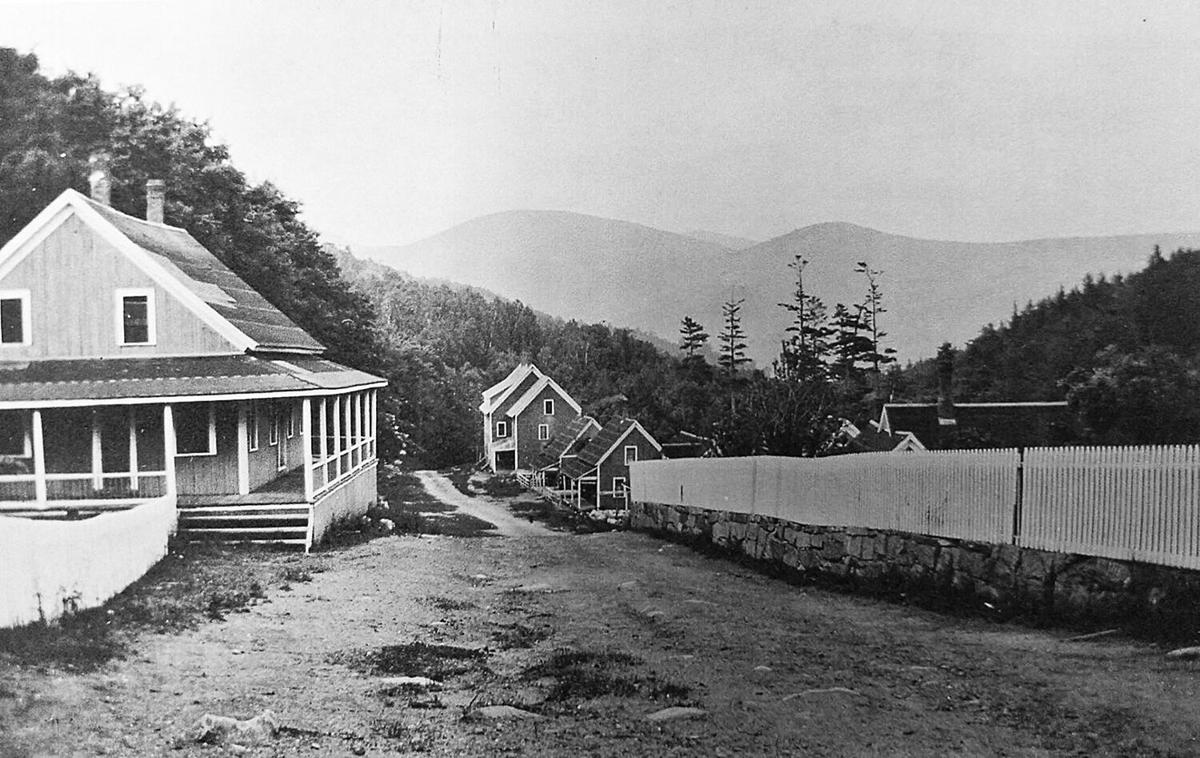 The main street was known as “Railroad Row,” with dozens of houses located within the immediate area. All the structures were owned by the Saunders family. (COURTESY PETER CRANE, COLLECTION OF BILL GOVE) 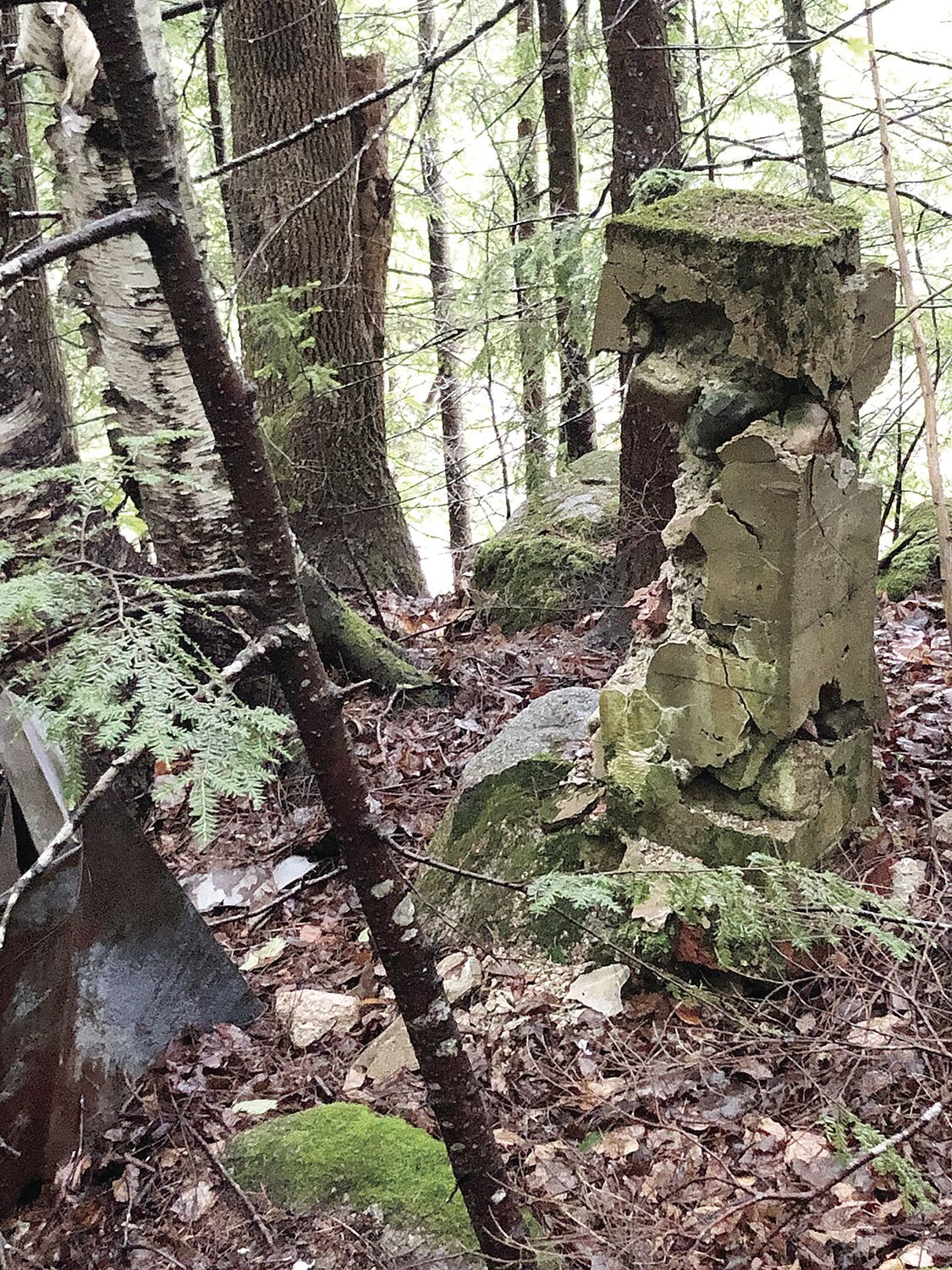 A typical ruin in the former logging village of Livermore. (TOM EASTMAN PHOTO) 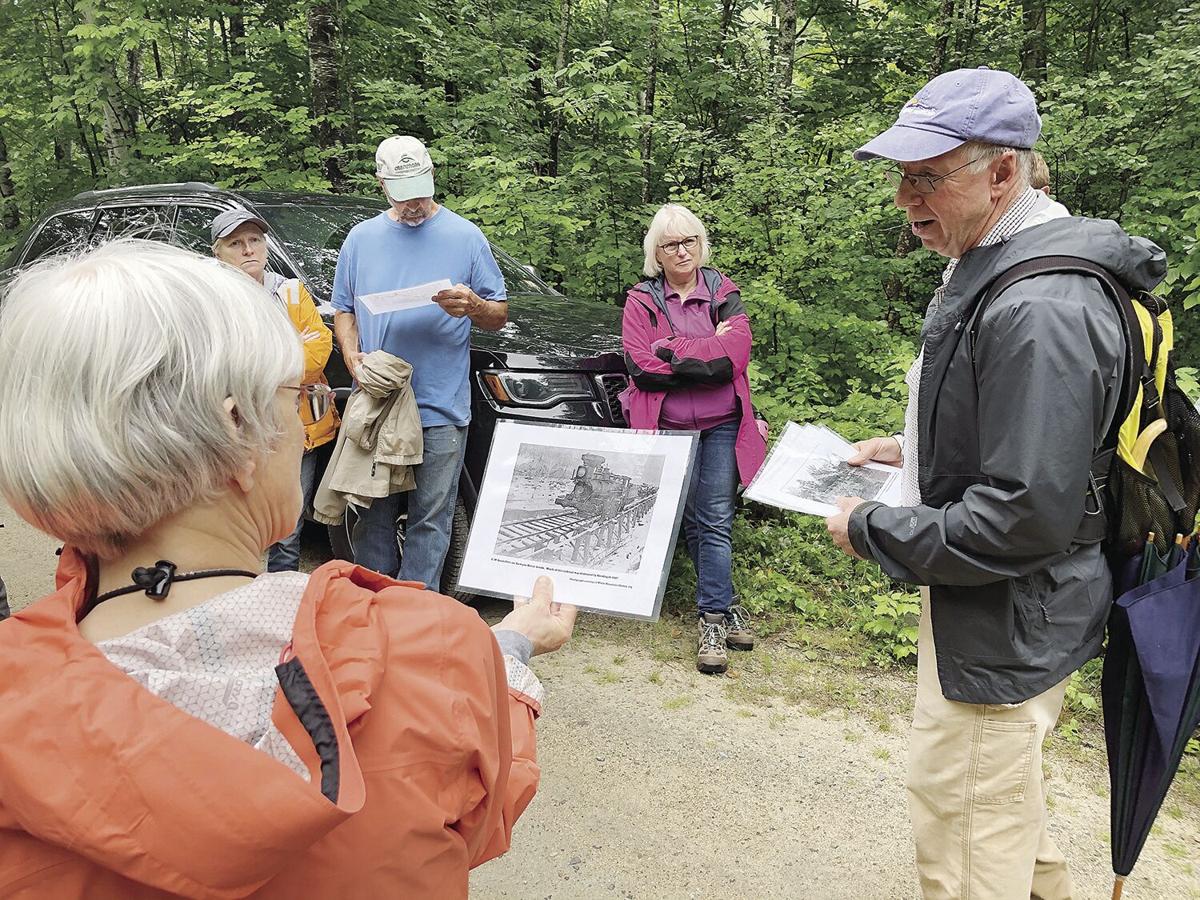 Cort Hansen stresses to participants of Sunday’s hike to Livermore the importance of not disturbing the ruins of the old logging village, noting the U.S. Forest Service forbids the removal of items from the site. (TOM EASTMAN PHOTO) 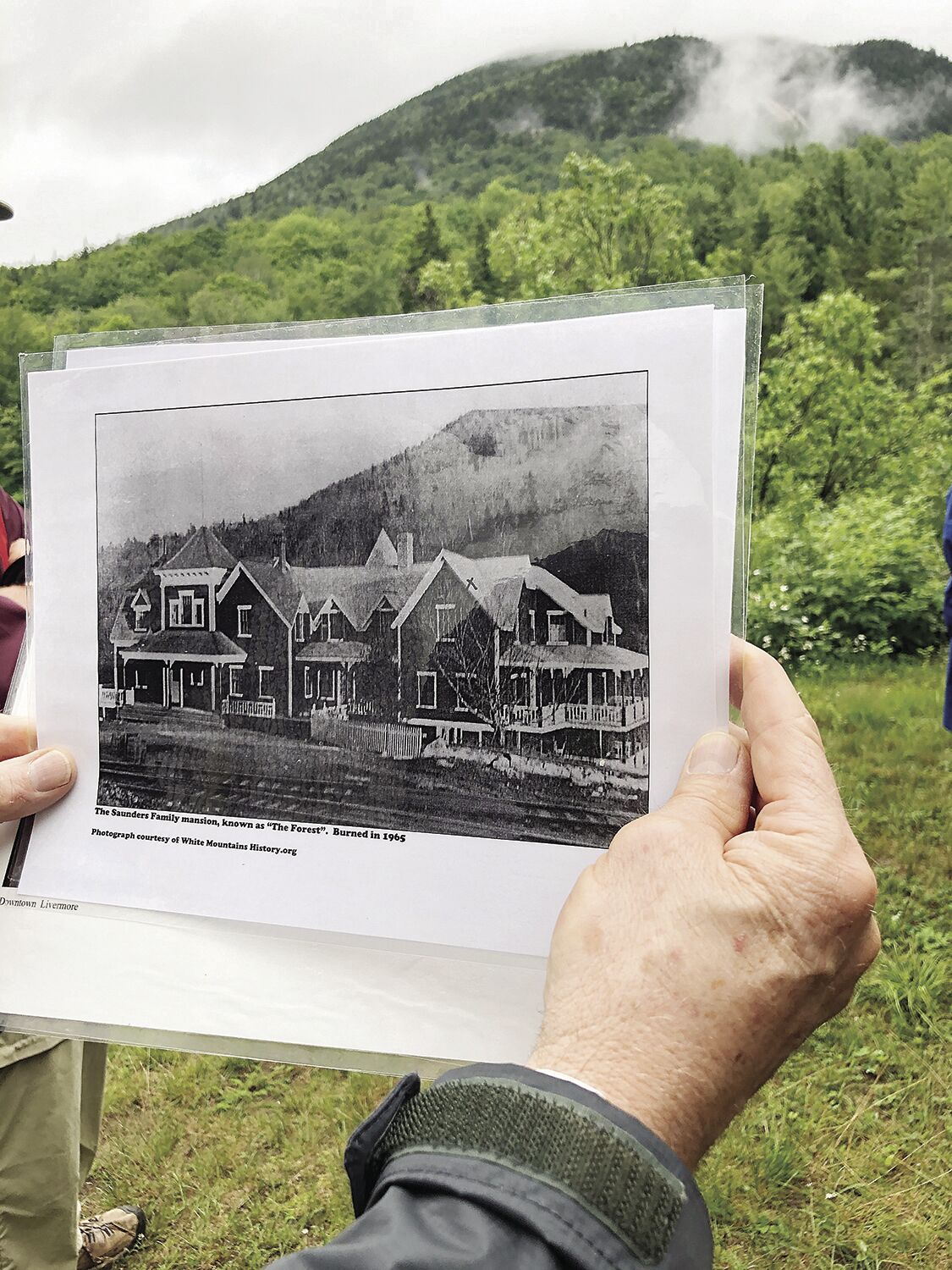 The Saunders mansion then (in the photo) and now (the forested background). (TOM EASTMAN PHOTO) 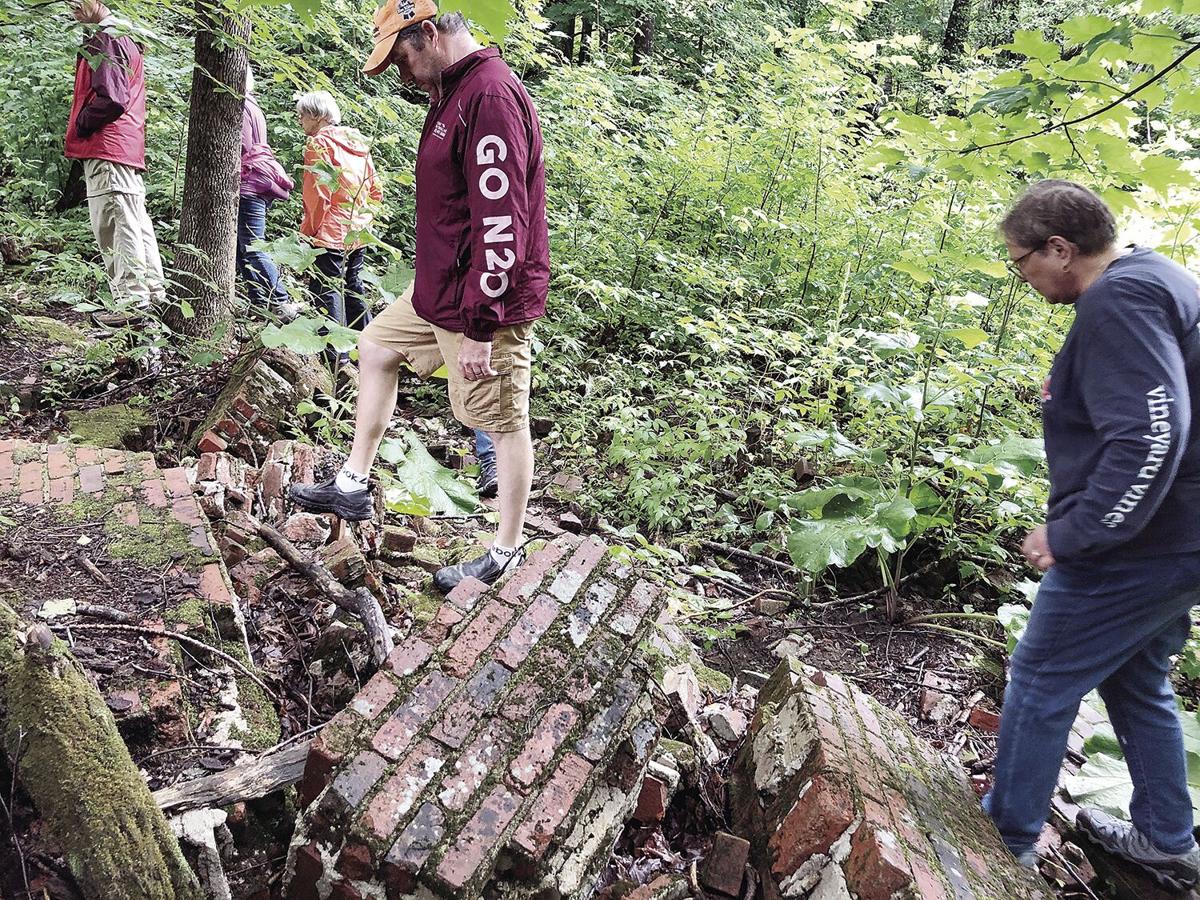 Livermore history our participants walk across the brick ruins of the old Mill No. 3. (TOM EASTMAN PHOTO) 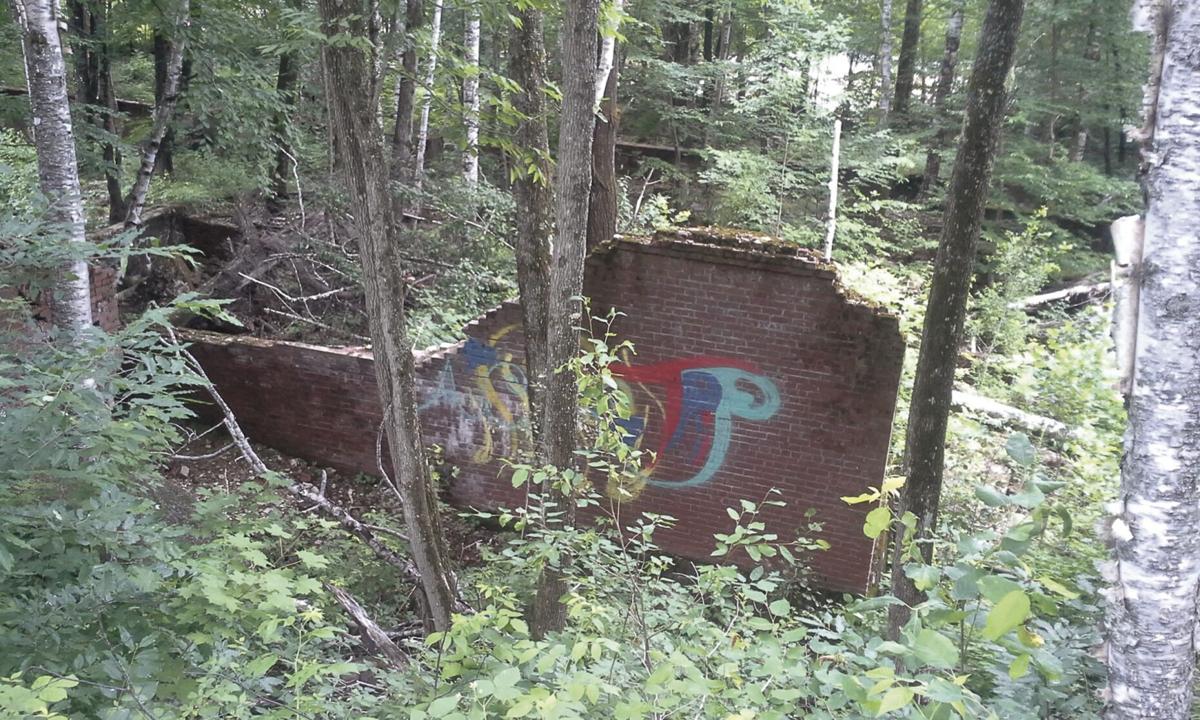 Graffiti unfortunately seen on a brick ruin at Livermore in 2020. Defacing archaeological sites over 50 years old is a federal crime, according to the U.S. Forest Service. (ROBERT TAKACS PHOTO)

In the Sawyer River Valley of Crawford Notch, there was once a bustling timber town called Livermore that has, quite simply, vanished. (COURTESY PHOTO)

The main street was known as “Railroad Row,” with dozens of houses located within the immediate area. All the structures were owned by the Saunders family. (COURTESY PETER CRANE, COLLECTION OF BILL GOVE)

A typical ruin in the former logging village of Livermore. (TOM EASTMAN PHOTO)

Cort Hansen stresses to participants of Sunday’s hike to Livermore the importance of not disturbing the ruins of the old logging village, noting the U.S. Forest Service forbids the removal of items from the site. (TOM EASTMAN PHOTO)

The Saunders mansion then (in the photo) and now (the forested background). (TOM EASTMAN PHOTO)

Livermore history our participants walk across the brick ruins of the old Mill No. 3. (TOM EASTMAN PHOTO)

Graffiti unfortunately seen on a brick ruin at Livermore in 2020. Defacing archaeological sites over 50 years old is a federal crime, according to the U.S. Forest Service. (ROBERT TAKACS PHOTO)

HART’S LOCATION — Once upon a time there was a logging village known as Livermore in the Sawyer River Valley of Crawford Notch.

Now it exists only in memory — and in the photographs and crumbling foundations that are featured in a fascinating history tour offered by former U.S. Forest Service employee and White Mountain history enthusiast Cort Hansen, co-owner of Ragged Mountain Equipment.

I was lucky to be among them.

Years ago, with my late brother Mountain Ear publisher Steve Eastman and friends, I once cross-country skied past the site of the former village, but until Sunday, I had never ventured there in summer.

After rendezvousing at Ragged Mountain Equipment in Intervale at 1:30 p.m., our caravan of seven vehicles made its way north on N.H. Route 16 and then onto Route 302 in Glen, after which we drove through Bartlett and up to Hart’s Location and Sawyer River Road in the White Mountain National Forest.

We took a left onto the dirt road and headed up a mile and a half until Hansen pulled over and we all joined him for a talk about the tour we were about to take.

“The third and last mill shut down in 1928 after a very bad flood event in November 1927. Yet look at how the forest has reclaimed the area,” he said, adding, “Up until the 1960s there were likely people still around who were born and raised in Livermore.”

He credited several historians for their research, including the late C. Francis Belcher, author in 1980 of “Logging Railroads of the White Mountains” and the Appalachian Mountain Club’s first executive director; late logging railroad author Bill Gove; and Dr. Peter Crane of the Mount Washington Observatory, who wrote his 1993 doctoral dissertation on the history of Livermore.

As we saw, there is one private camp up there today, but after the Forest Service bought the acreage for the White Mountain National Forest in 1937, the village’s buildings were dismantled by local crews of the Civilian Conservation Corps that President Franklin D. Roosevelt established during the Great Depression.

“Peter’s research shows that after 1937 there were some structures standing, including the Saunders mansion and the mill. But they were nuisances for the Forest Service, and Peter indicates that somewhere around 1935 the CCC may have assisted in removing the railroad tracks. There was some talk of using the railroad bed for a new road, but the road wasn’t built until after World War II in the late 1940s,” Hansen said.

Adding to the tour participants’ enjoyment were many photographs of the former village that Hansen collected from various history sources, including digital copies from Crane’s collection and the non-profit website whitemountainhistory.org.

We started the tour at the former site of the schoolhouse.

“You can really see this old cement foundation better in the fall,” said Hansen as we looked at a gap in the heavy foliage to the foundation of what was once the village school.

He said the townspeople originally had to pay rent for the school to the Saunders family, operators of the mill. That led them to buy the adjacent lot from the Saunderses in 1921.

“This was a full-fledged town with administration like communities of today,” said Hansen. “Peter Crane writes that the town voted in June 1921 to expend $1,000 to purchase the existing school and the land it sat on. A committee was formed to build a new schoolhouse — they raised and appropriated $3,323.12 to build a new school in 1924 and to equip it for students.” The average student body numbered about 20, with students ranging in age from 6-year-olds to teenagers.

Our next stop was the foundation of the old company store, located next to a private cottage. It’s near the former village center. Adjacent to it is the old site of the Saunders mansion, which burned down in 1965.

Hansen held up pictures of the old mansion, The house is gone, but 3,371-foot Mount Tremont behind it appeared the same on Sunday as in the photos, with wisps of feathery clouds rising from the ridgeline the day of our tour.

Next we made our way to the ruins of old mill No. 3, clambering past the old bricks that lay on the ground.

“There were two prior mills,” Hansen said. “The records are a bit vague but the first one that was built in 1875 burned in 1876 — it wasn’t unusual for mills to burn back in those days,” he said.

“The second one was built in 1877 and lasted until a fire in October 1918. There was a lag until they built the third mill between 1920 and 1922 at a cost of $45,000 — speculation is that the two key people at the time in the Saunders family operation, Daniel Saunders Jr. and son Charles G., had died by 1918 and the first railroad engine got wrecked in 1920 when it fell into the Sawyer River, so that may explain the lag,” Hansen said.

A short hike west was the former site of the mill pond, which allowed for mostly softwood spruce logs and select hardwoods to be stored and then floated down to the mill, where they would be made into dimensional lumber and laths used for homebuilding.

From there they would be brought by the village’s logging railroad down to the Sawyer River Station siding in Crawford Notch for shipment by the Portland & Ogdensburg Railroad, later the Maine Central. The railroad was cut through Crawford Notch in 1875, clearing the way for Livermore to be founded in 1876 with its connecting railway, which ran 8 miles west to today’s Kancamagus Highway (U.S. Route 112).

It served the seven logging camps that operated in winter on the Saunderses’ holdings, and Hansen described how many loggers were seasonal workers.

“Sometimes farmers worked as cutters and teamsters, and with the ending of the agricultural season, went into the woods to work in the fall,” he said, but many men were from Maine, often from the banks of the Penobscot and Kennebec rivers. More  came from eastern Canada, either the Maritime provinces (where they were referred to as P.I.’s after Prince Edward Island), or from Quebec or New Brunswick.

“In Livermore, many of the loggers were French Canadian,” Hansen said.

The camps were mostly low buildings of rough-hewn logs covered with bark or tar paper. Inside the bunkhouses, men lived in one or two large communal rooms. The kitchen was generally at the front of the building and the bunk room at the rear.

We next made our way down what was once the main street, winding through the overgrown path down past the company store site, high above the Sawyer River. We came across a baker’s proofing box, rusted and rising from the tangled brush. We then climbed up a steep section to the left, opposite Paradise Falls, coming out on the dirt Sawyer Pond Road.

Both at the start and end of the tour, Hansen underscored that the U.S. Forest Service urges people visiting the old village site to treat it with respect. In fact, the 1906 Antiquities Act protects archaeological sites over 50 years old and makes it a federal crime to disturb them.

At the end of the three-hour tour (which Hansen hopes to host again in the fall), our knowledgeable guide saluted the Saunders family for being ahead of its time in terms of sustainable forestry.

“They selectively cut the whole time of their operation there,” said Hansen, contrasting that with other timber barons, such as J.E. Henry, who clear-cut areas such as Zealand Valley before moving onto the Pemigewasset Valley near Lincoln, and whose brutish logging practices eventually led to the passage of the 1911 Weeks Act that resulted in the creation of the WMNF in 1918.

The Saunderses, on the other hand, “cut the big stuff first, then years later they did a second cutting and then a third cutting. They were still cutting virgin timber the latter part of the 1920s when a lot of the virgin timber had been cut everywhere else in the White Mountains,” Hansen said.

A good legacy to pay tribute to today, whether hiking or mountain biking this season in the valley that once upon a time was a logging village but which now can be remembered as Livermore — no more.

The rise and fall of once-teeming timber town

HART’S LOCATION — The Saunders family who operated the Grafton Lumber Co. and owned the White Mountains town of Livermore came from Lawrence, Mass.

So nice to see this well-written article about Livermore. I remember visiting it with my mother as a child, and have wondered how it looks these days. Tom Eastman’s observations of that once-populated town are much appreciated.