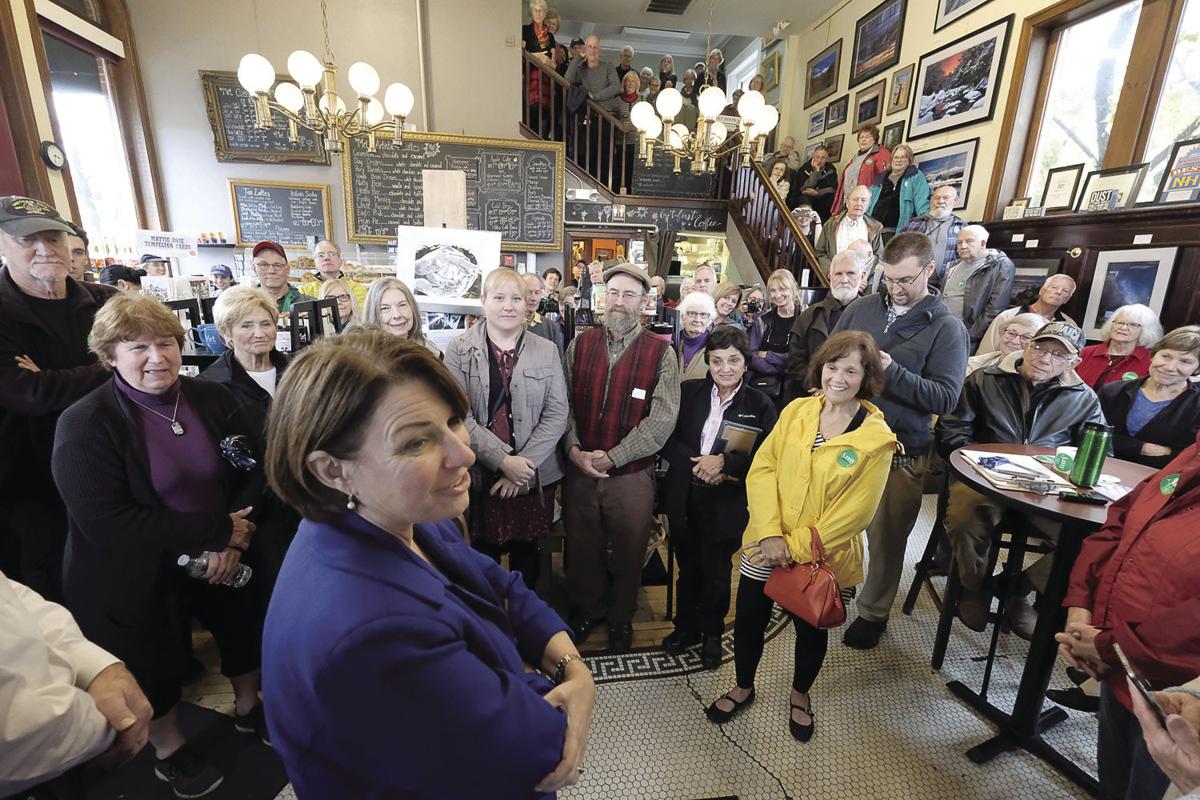 Democratic presidential hopeful Sen. Amy Klobuchar (D-Minn.) gives a short stump speech to a standing-room-only crowd at the Met Coffee House in North Conway  Thursday during a campaign stop on her way to Berlin as part of a 10-county tour of New Hampshire. (JAMIE GEMMITI PHOTO) 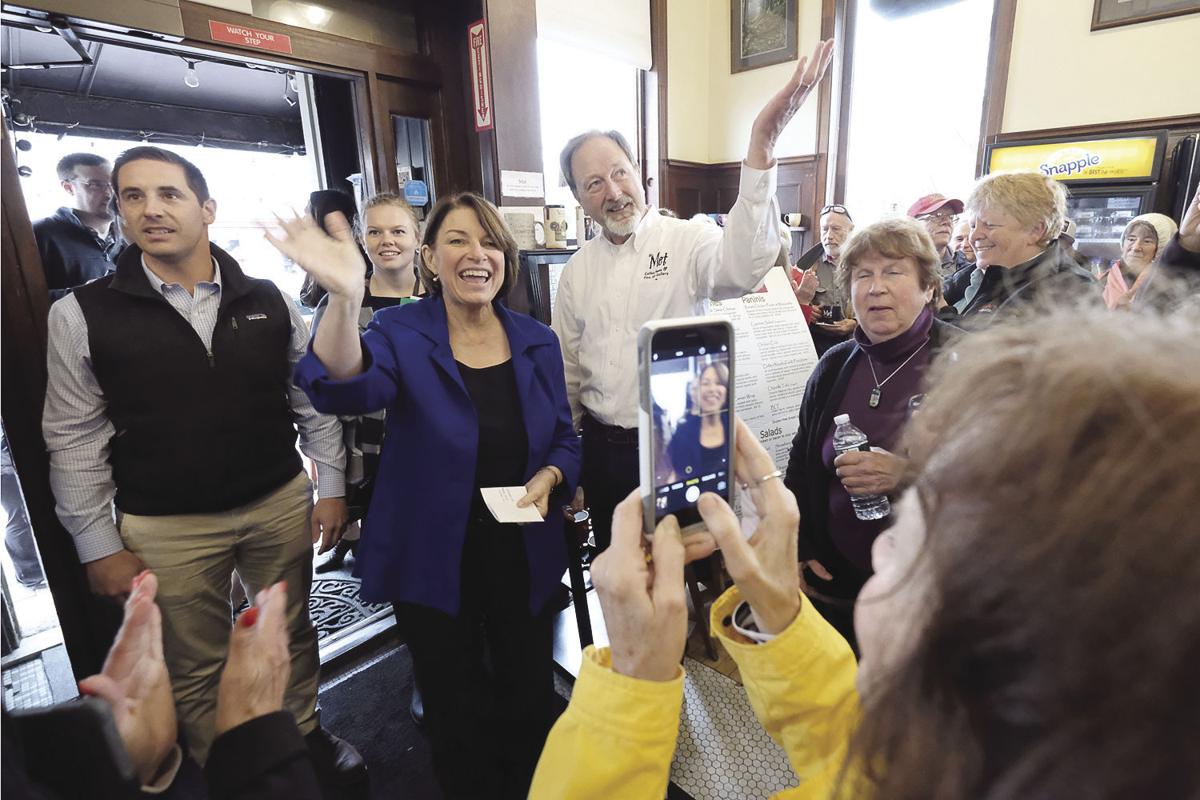 Sen. Amy Klobuchar (center) waves to the crowd at the Met Coffeehouse during a campaign stop in North Conway on Thursday afternoon as she is welcomed by owner Larry Flaherty who motions to the the crowd gathered on the business’ second floor. (JAMIE GEMMITI PHOTO) 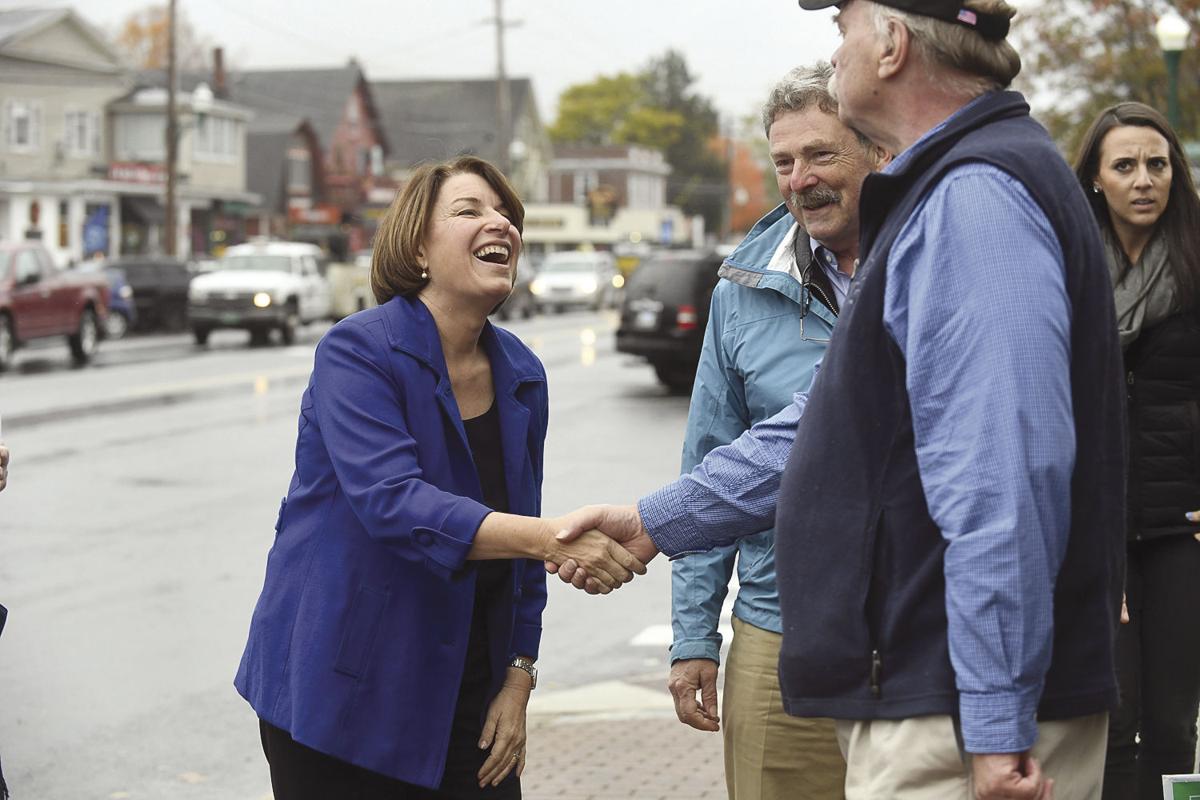 Sen. Amy Klobuchar (right) shakes hands with George Cleveland introduced to her by Chuck Henderson in front of the Met Coffeehouse in North Conway on Thursday. (JAMIE GEMMITI PHOTO)

Democratic presidential hopeful Sen. Amy Klobuchar (D-Minn.) gives a short stump speech to a standing-room-only crowd at the Met Coffee House in North Conway  Thursday during a campaign stop on her way to Berlin as part of a 10-county tour of New Hampshire. (JAMIE GEMMITI PHOTO)

Sen. Amy Klobuchar (center) waves to the crowd at the Met Coffeehouse during a campaign stop in North Conway on Thursday afternoon as she is welcomed by owner Larry Flaherty who motions to the the crowd gathered on the business’ second floor. (JAMIE GEMMITI PHOTO)

Sen. Amy Klobuchar (right) shakes hands with George Cleveland introduced to her by Chuck Henderson in front of the Met Coffeehouse in North Conway on Thursday. (JAMIE GEMMITI PHOTO)

CONWAY — Presidential hopeful and U.S. Sen. Amy Klobuchar drew a standing-room-only crowd Thursday at The Met Coffee House in North Conway, where she spoke about the weather, ISIS and more. But unfortunately for some, she didn’t take questions from the audience.

Klobuchar (D-Minnesota) was on a tour of all 10 New Hampshire counties in 30 hours starting Wednesday. Before coming Carroll County she was in Laconia to see an addiction treatment organization. She came to The Met after stopping at Veno’s Specialty Foods and Meats in Conway. After the Conway stop, she headed to Berlin. The tour was to end in Grafton County.

“It’s been a great day despite the rain,” said Klobachar, 59, to the Sun outside of the Met, making reference to a passing nor’easter. “I’m used to that having announced in the middle of a blizzard. We’ve been having huge crowds in the rain no matter where we go.”

Klobuchar formally entered the 2020 race during one of the worst weather presidential announcements in recent memory — outdoors in a driving snowstorm in frigid temperatures on Feb. 10.

The senator said she made a bee line to New Hampshire after the Democratic Debate in Ohio Tuesday because she considers the Granite State critical to her campaign.

“I am someone who goes everywhere; not just where it’s comfortable,” said Klobuchar, explaining why she felt the need to visit all 10 New Hampshire counties in such a short period of time. “I’m someone who likes to reach out to people whether they are fired up Democrats, or independents or moderate Republicans. We have seen them show up everywhere.”

She is considered to have had a strong debate performance Tuesday, and her campaign announced Wednesday it reached $1.1 million in contributions in 24 hours since the debate.

When the Sun asked Klobuchar why New Hampshire voters should be excited about her, she responded: “First of all, I wear sweaters like they do. I have grown up in the North County myself, and that would be Minnesota. Our states have a lot in common.”

Later, she told the audience at The Met she is the daughter of a newspaper man and a teacher.

Secondly, Klobuchar said, she is a person who gets things done. Since getting to the Senate, she has helped pass more than 100 bills where she was the lead Democrat. She said her work is similar to that  New Hampshire’s U.S. senators, Maggie Hassan and Jeanne Shaheen, who are both Democrats.

“Jeanne Shaheen is someone that’s had to literally carry foreign policy over in NATO because Donald Trump is not doing it,” said Klobuchar. “They are good friends and advisers to me and I’m also someone who believes that what unites us is bigger than what divides us.”

Despite being an hour or so late to The Met, Klobuchar still was able to greet a standing room only audience of 100 or so people. The crowd size pleased the senator.

“The one thing you knew about me after I announced in the middle of a blizzard is I would be there rain or shine,” she said.

Klobuchar said New Hampshire was one of the few states with the “wisdom” to elect two women to the U.S. Senate, and one of the others is Minnesota.

During her talk, she spoke about a number of topics like what she said was President Donald Trump’s mishandling of the Kurds in Syria, who have been attacked by Turkey. Klobuchar said she’s been been to the Turkish border before.

“When you stand there you just realize what these Kurds have done,” said Klobuchar. “They stood at our side to fight ISIS, they lost 11,000 people and he (Trump) just leaves them for dead, basically.”

She also faulted the president for failing to lead on climate change and getting out of the Iranian nuclear deal. Domestically, she said Trump is failing to improve infrastructure like rail, cell phone and broadband.

Klobuchar said she wants to build a “blue wall” of Democratic states like Pennsylvania, Michigan and Wisconsin.

“We are going to make Donald Trump pay for it,” said Klobuchar.

Some at the event were unhappy that Klobuchar didn’t take questions from the audience. Instead, Klobuchar posed for pictures with attendees that were taken by her entourage.

“A candidate makes us wait — sure she’s trying to cram a lot in — but then doesn’t take a single question,” said attendee Andy Davis of Albany. “Selfie lines are good for the candidate but they are not good for the people.”

Farnum would have liked the Klobuchar to take questions but was still interested in her as a candidate.

“I think she could have had a really big turn out in a bigger space,” Leonard said.

The Sun asked Klobuchar if she is  familiar with New Hampshire man David Fravor who was made famous by The New York Times in 2017 for his account of chasing a UFO off the West Coast as a U.S. Navy fighter pilot in 2004.

Fravor was on the Joe Rogan Experience show, which has been seen over three million times on Youtube since Oct. 5.

“No, but I’m going to read up on it when I get in the car,” said Klobuchar. “I’m actually looking forward to reading about it.”

Klobuchar and John Bessler, her husband, have a daughter, Abigail, age 24.

For more go to amyklobuchar.com.