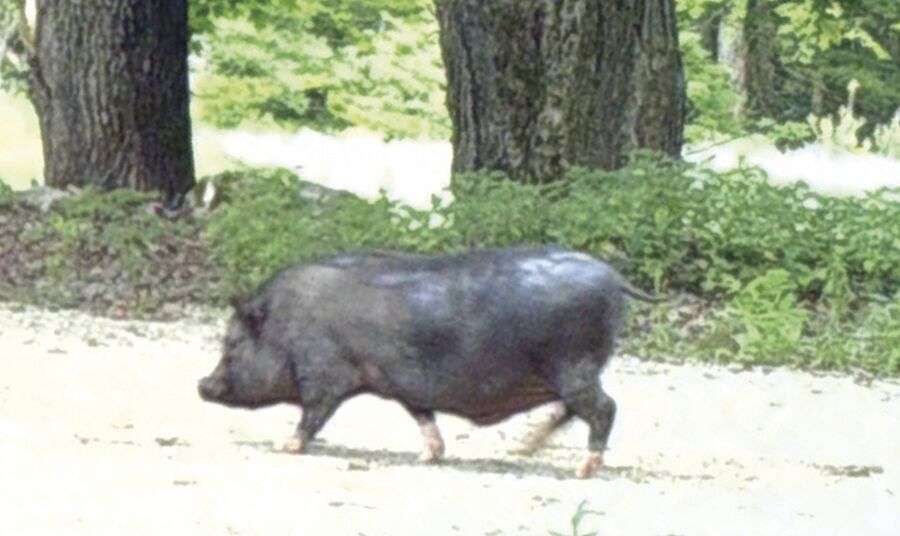 Ossipee Police posted this picture of the lost pot-bellied pig on Facebook on Monday. By Thursday it was located and is now in the care of the SPCA in Stratham. (COURTESY PHOTO) 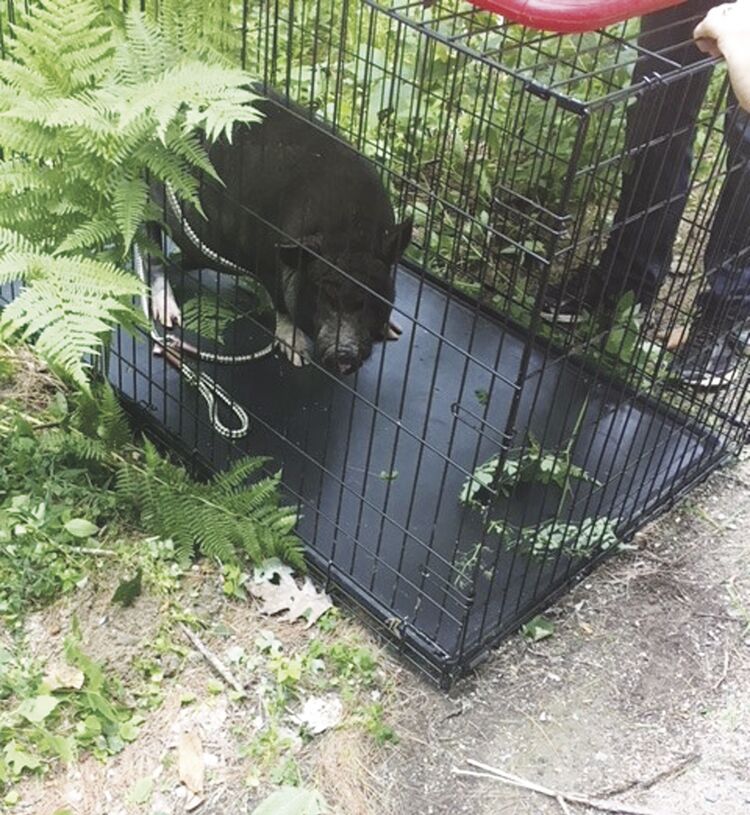 Francis the pot-bellied pig is seen in the cage provided by the SPCA after he was located in a rural section of Ossipee. (COURTESY PHOTO)

Ossipee Police posted this picture of the lost pot-bellied pig on Facebook on Monday. By Thursday it was located and is now in the care of the SPCA in Stratham. (COURTESY PHOTO)

Francis the pot-bellied pig is seen in the cage provided by the SPCA after he was located in a rural section of Ossipee. (COURTESY PHOTO)

OSSIPEE — A pot-bellied pig that was seen wandering around Hanson Road over the past few days was captured Thursday in a “coordinated effort,” Ossipee police said.

On Monday, the department reported on Facebook they’d gotten a call about a lost pig and reached out to the public for help. On Thursday afternoon, they announced the pig was found.

“Just wanted to update everyone on the Pot Belly Pig,” the police posted at 1 p.m. “New Hampshire SPCA was able to come up today and catch our Pot Belly Pig and hopefully will find him a home someday. Thank you to SPCA!”

The local Society for Prevention of Cruelty to Animals chapter is based in Stratham.

SPCA Equine and Farm Manager Carrie Fyfe shared with the Sun Friday that she and another SPCA farm technician, Haley Turmel, helped locate the pig, whom they dubbed “Francis,” in a “very rural” part of town. “He was very shy and obviously quite fearful,” Fyfe said.

She said that Francis “tried to split a couple times” but in under an hour they were able to corral him against a stone wall and get a slip lead around his leg and neck. They let him calm down before leading him into a crate.

Gayer, who also serves as Albany and Effingham’s animal control officer, said she was first on scene and found Francis hiding in some bushes. She said the rescue took about a half-hour.

“I never had a call on a pot-bellied pig before,” said Gayer. “He was a cute little thing.”

They tried to lure him with dried corn, but Francis didn’t fall for it. “He was, like, ‘I don’t think so,’” said Gayer, who thinks that Francis will make someone a “great pet.”

Gayer said she advised a homeowner who spotted Francis to leave their shed and barn open before the storm so he could have had a place to go.

The pig is “small” by pot-bellied standards and weighs between 65-80 pounds, she said. If properly fed, he is likely to stay under 125 pounds.

He is a young neutered male and they can tell he’s between a year and 3 years old because he has little tusks. Pot-bellied pigs reportedly can live to be around 20 years old.

The SPCA legally has to hold Francis for seven days to give an owner the chance to reclaim him. But Fyfe said since “this guy has been on the lam for a while, we are doubtful anyone is going to step forward.” He will be evaluated, vaccinated and once cleared legally and medically, be ready for adoption.

Francis appears to be in good shape but he has some scarring on his rear end.

Because they are so long-lived, pot-bellied pigs need a committed owner. They also need fenced-in outdoor space because they like to root around. They should also have a sturdy shelter from snow and sun. They are social and like company of other pigs and farm animals. They enjoy toys, puzzles and swimming pools.

“All those things keep them engaged and using their little brains for good,” said Fyfe. “They are very intelligent, and they do get bored.”

Pot-bellied pigs have been known to assist police departments with drug detection.

Fyfe said they have “an incredible” sense of smell and are “highly trainable.”

Asked what pigs eat, Fyfe said they like to munch on plants they dig up. At the SPCA, pigs get a small amount of special pig pellets twice per day, and they also supplement with vegetables and fruit.

“They don’t eat a ton,” said Fyfe. “A big mistake people make is overfeeding them.”

Castaldo said members of the public have been interested in the pig’s welfare.

“They want to know what will happen,” he said.

Anyone interested in adopting Francis should monitor nhspca.org and complete a pig adoption application.