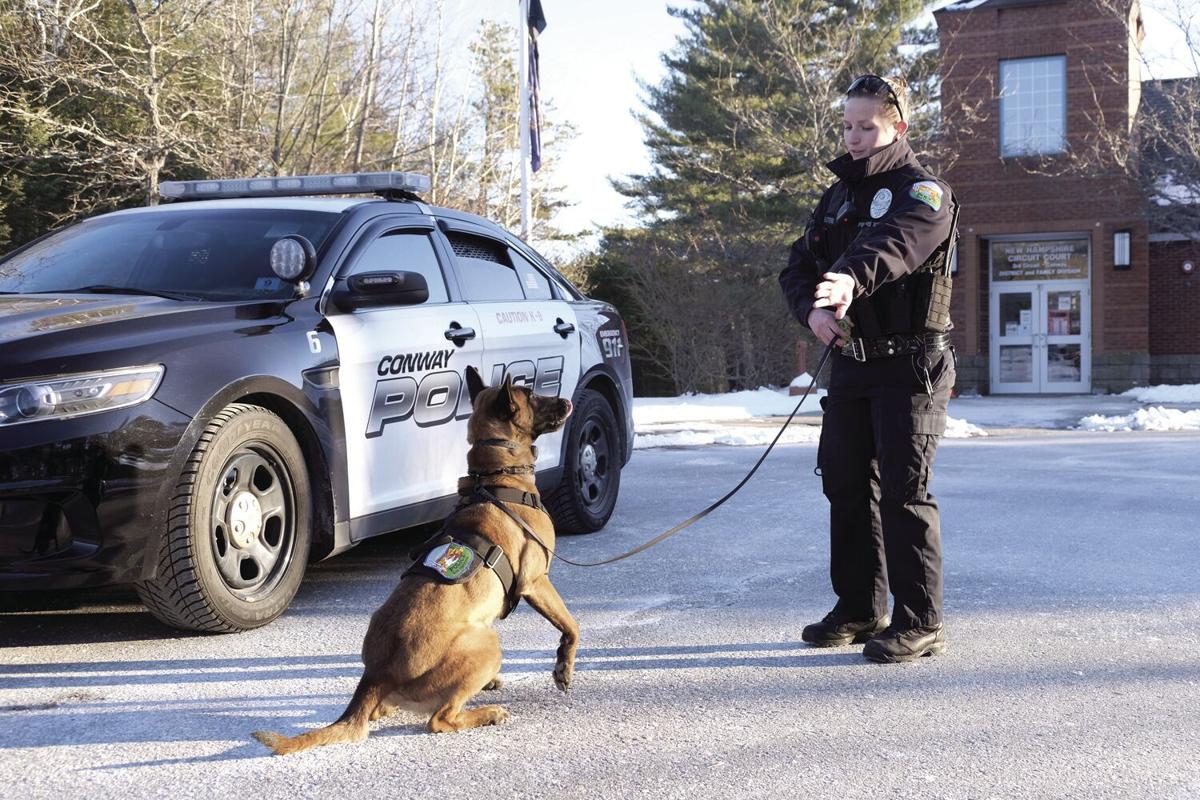 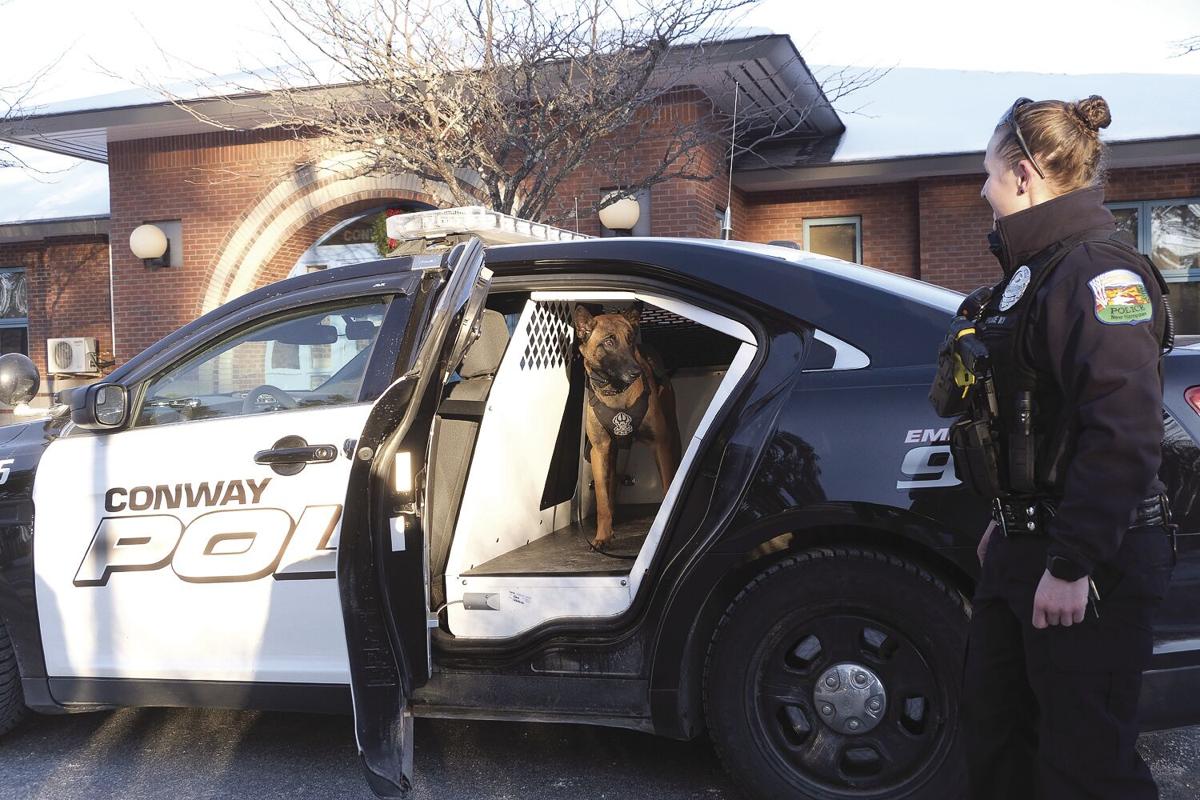 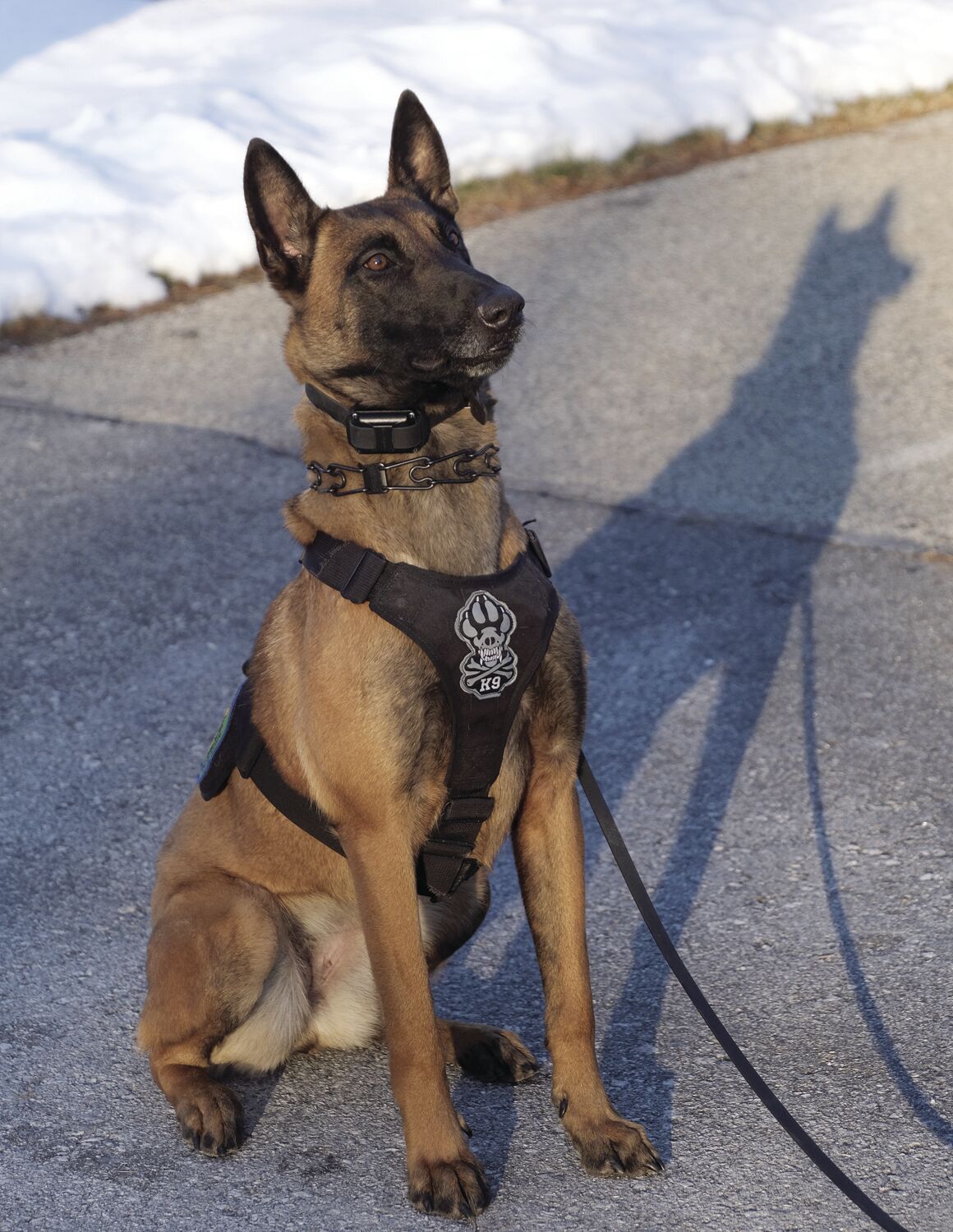 CONWAY — The youngest member of the Conway Police Department is already the most fleet of foot on the force at just 16 months old.

Summit, a Belgian Malinois, is Conway PD's first K9 since 2004. She is partnered with Patrol Officer Morganne Sterl, who came up with the idea to bring a dog onto the force.

Dec. 28 marked the first day the two hit the roads of Conway on patrol.

“She gets a normal rotation just like all the other officers," Police Chief Chris Mattei said last Friday. "But she’s on call if we need anything in town. If she’s off-duty, she can get called in."

Sterl, a dog trainer before joining the department three years ago, did the research in scouting for a K9. Conway was able to secure a grant for acquiring the new K9 officer through the Stanton Foundation, created by former CBS President Frank Stanton.

The Stanton Foundation’s K9 Unit Establishment grants provide $27,000, which is expected to cover the cost of purchasing the dog, training the dog and a police officer, retrofitting a cruiser for the K9 unit, setting up a kennel at the officer’s home, and food and veterinary care for the dog for the first three years," the foundation's website said.

Summit will be certified in two areas, Mattei said. The first is as a patrol dog, he said, "which means tracking, whether it’s a suspect track or if we have somebody get lost in the woods."

Summit will also be certified in drug detection. “It'll be very good for Conway and will allow other police departments that are fairly local to Conway,” said Mattei.

While this is Sterl’s first police dog, she grew up with dogs and currently has a Dutch shepherd and a border collie mix.

“She’s a super well-rounded dog,” she said. “She looks like a normal dog, but outside of that, she’s all business — she loves to work.”

She said she's always been fascinated by police service dogs "for the work that they're willing to do. And they're another animal. You get the Malinois and the shepherds, they are like Division I athletes. You add in the ones who are capable of being police search dogs, they are another breed of their own.”

Mattei said he, former Chief Ed Wagner and Sterl went to Littleton, Mass., to learn about the Stanton Foundation, where they met Summit for the first time.

“They brought Summit out of the vehicle, and the person who's running the program says, 'Now, it may take a while for the dog to bond,’ recalled Mattei. "Well, it was funny. ... Summit went right over to Morganne and leaned right up against her. It was crazy.”

Summit is the department's third K9 officer. Pachee, a 4-year-old Belgian Malinois joined Conway PD in October 2002 but was recalled by the Working Dog Foundation after two months and replaced by Thor, an 11-month-old Dutch shepherd, in November of that year.

Thor partnered with (now retired) Sgt. George Walker, and helped track criminals and lost individuals and search for drugs. Three weeks on the job, Thor made his first collar, tracking down and then treeing an individual involved in a domestic disturbance.

Thor, named the 2004 dog of the year by the Working Dog Foundation, completed his final shift in August of that year before going into retirement.

Summit is already a big hit with her colleagues.

“Everyone wants to pet her,” Mattei said, “and that’s not what can happen.”

“They all want to snuggle with her,” Sterl added.

The department renovated a 2-year-old cruiser into a K9 unit.

“We had to order some special equipment for the whole back seat area, which now is set up as a compartment for the dog,” said Mattei. “It has door pops on it. So Morganne from outside the cruiser can hit a button, and it will pop the doors open if she needs the dog to come out. It's heat-sensitive, temperature-sensitive, so alarms will go off if it gets too hot in there.”

He added: “It's all funded by the grant, and we got another $1,000 grant through the local Walmart, so everything is all paid for."

For a job well done, Summit gets the reward of play tug with Sterl with a ball and rope attached.

“She’s a really good dog, she wants to please,” said Sterl. “She loves the ball and loves tug toys, anything that moves that you can engage her with is good for her.”