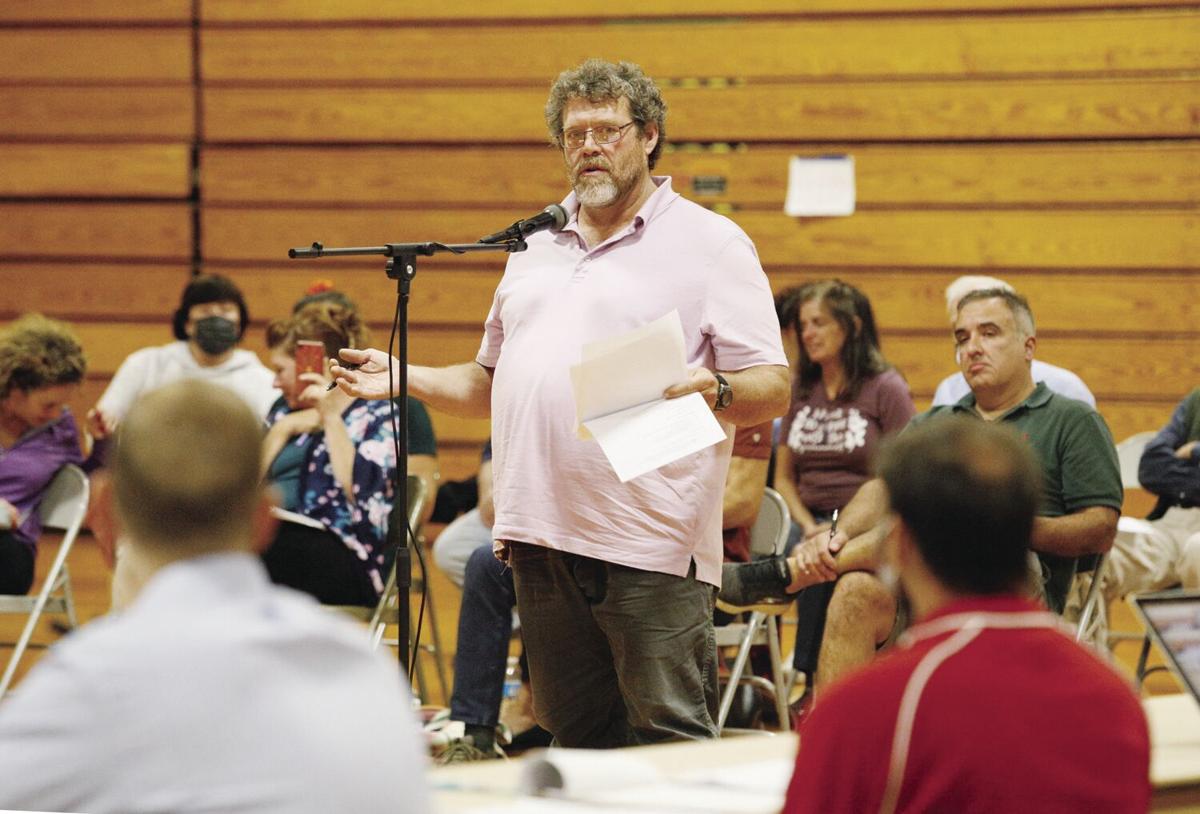 Conway resident Mike DiGregorio speaks during the public comment section of the Conway School Board meeting in the Seidenstucker Gym at Kennett Middle School on Tuesday night. (RACHEL SHARPLES PHOTO) 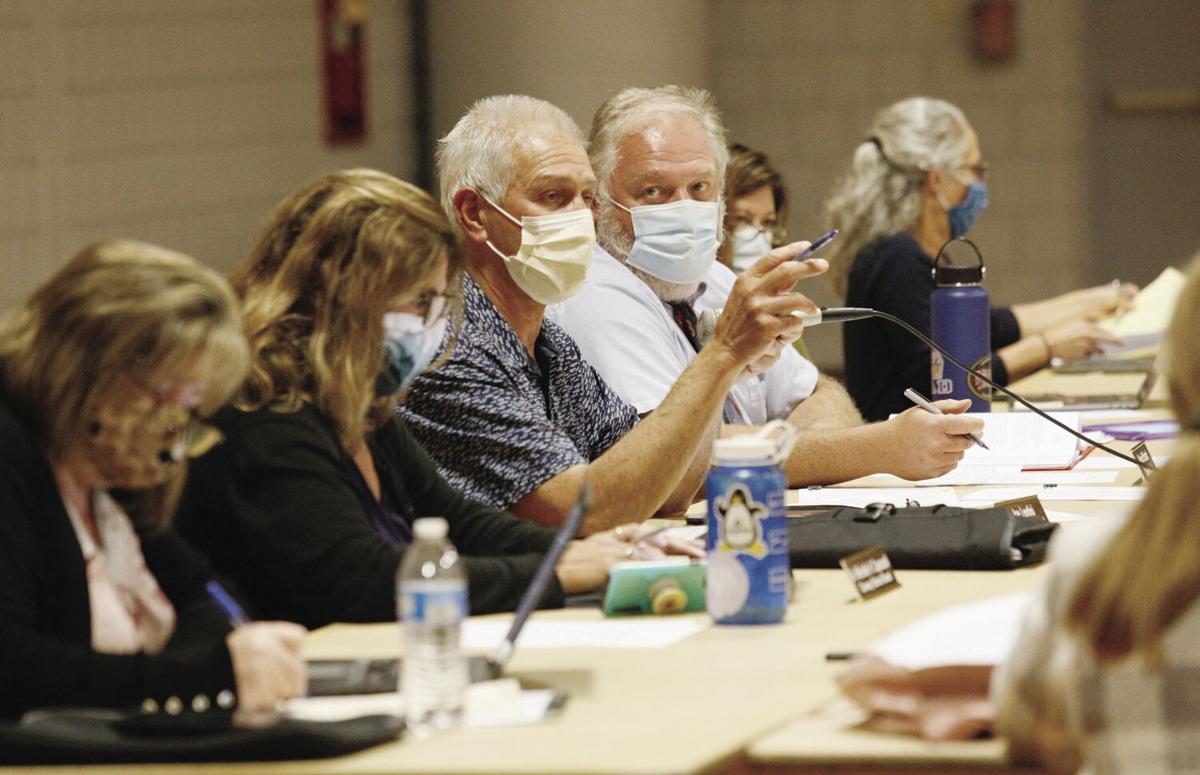 Conway resident Mike DiGregorio speaks during the public comment section of the Conway School Board meeting in the Seidenstucker Gym at Kennett Middle School on Tuesday night. (RACHEL SHARPLES PHOTO)

CONWAY — The Conway School Board on Tuesday opted not to adopt a public comment policy at its meeting, voting 6-0 to table the proposal and send it back for revision by the board’s policy committee.

Moving to table the policy was Joe Mosca, seconded by Randy Davison. Mosca sits on the policy committee with school board chair Joe Lentini and board member Jessica Whitelaw.

Lentini helped craft the policy, which was approved at a first reading last month by a 4-2-1 vote.

It could come back before the board at its next meeting Oct. 25.

The policy would let the board limit an individual speaker to five minutes per person. “All speakers are to conduct themselves in a civil manner," it says.

"Obscene, libelous, defamatory or violent statements, symbols or signs shall be considered out of order and shall not be tolerated. The board may terminate the speaker’s privilege of address if the speaker does not follow this rule of order."

It continues: "The board vests in its chair, or other presiding officer, authority to terminate the remarks of any individual when they do not adhere to the rules above.”

The creation of the proposal followed meetings at which lengthy and occasionally heated public comment periods caused proceedings to run hours past their usual length.

After Tuesday night’s unanimous vote, Lentini told the Sun, “It comes down to finding that balance between giving the public who come in an opportunity to speak and give us input, which is critically important, but also giving us the time to get the board’s work done.”

Board members Dr. Michelle Capozzoli, Mosca and Davison shared concerns about the draft policy, with Capozzoli and Mosca saying it needed more work, and Davison saying no matter how hard it may be for the board to hear criticism, it is the board’s duty to do so.

“We have to listen to the community,” said Davison.

“I don’t understand why we are changing (the policy) because a topic has come into play that people are having difficulty with," referring to concerns about students wearing masks that people have been voicing at the meetings.

"The policy should stay the way it is – we may not necessarily agree with what the community comes forward with, but we need to listen to listen," Davison said.

Capozzoli said she had done research on how other towns handle time limits on public comment. Many are far stricter than the one being proposed for Conway.

She also found the proposal to be uninviting to the public. Still, she underscored the need for input and civility in public discourse.

“We are representing our children. Just as teachers are held to a certain standard, we would expect when folks come to speak with us they use a civil manner and I don’t think that’s unreasonable (for us) to ask for that,” Capozzoli said.

She also explained that the public needs to understand that the board follows proceedure and that there are times when they need to go into nonpublic session.

“I cannot vote in favor of the way it is now,” said Capozzoli.

Mosca concurred, noting, “I agree 100 percent with what Michelle said that there are things that need to be changed in this policy, so I cannot vote for it, either,” said Mosca.

Capozzili countered that when she sits on the SAU 9 board, she likes to hear comments from the towns that send their students to Conway schools. But Mosca said those sending towns all have their own school boards and resident have the opportunity to speak there and this was the Conway School Board.

Voting to table along with Lentini, Capozzoli, Whitelaw, Mosca and Davison was school board member Ryan Wallace.

Among audience members speaking against the proposal was Michael DiGregorio, a former selectman, past school board member and current Conway Village Fire District commissioner.

“In my 30 years of public service in this community I never considered limiting the speech of individuals and I never will,” said DiGregorio.

He continued: “Years ago, when we had a vigorous debate about whether to build a new high school, not once did we shut off debate. Why? Because the school board knew we were getting something for the town and we had to listen …

“But today, if you have something that the board doesn’t like, you limit speech … I have never seen the town so angry about the way they are being treated by the school board during public comment," he concluded.

Other speakers were Conway Municipal Budget Committee chair Jim Lefebvre, who spoke strongly in favor of the public’s right to free speech, albeit in a civil manner; Nicole Nordlund of Madison, who has a daughter at Kennett Middle School and who spoke how the Madison School Board handles allowing the public to get items placed on the agenda for comment; Kevin Clifford of Madison, father of a KHS freshman, who also spoke about the Madison School Board's pubic comment policy; Cassie Cox of Center Conway who has children at Pine Tree School; and Robert Chase of Bartlett, whose child attends Josiah Bartlett Elementary School in Bartlett.

Cox said she had to pay for a babysitter to exercise her right to free speech to attend Tuesday night’s session. She urged the board to vote the proposed policy down.

Clifford said he appreciated the courteous way with which he was treated by the Madison School Board when he appeared there compared to his earlier appearances before the Conway School Board. On a positive note, he praised Kennett High's recent homecoming activities and hosting of a recent motivational speaker who had an impact on his son, he said.

Bill Aughton, a past school board member, told the Sun he also was impressed with the civility shown at Tuesday night’s meeting by all concerned.

“It was nice to see that. We need more of that," said Aughton.