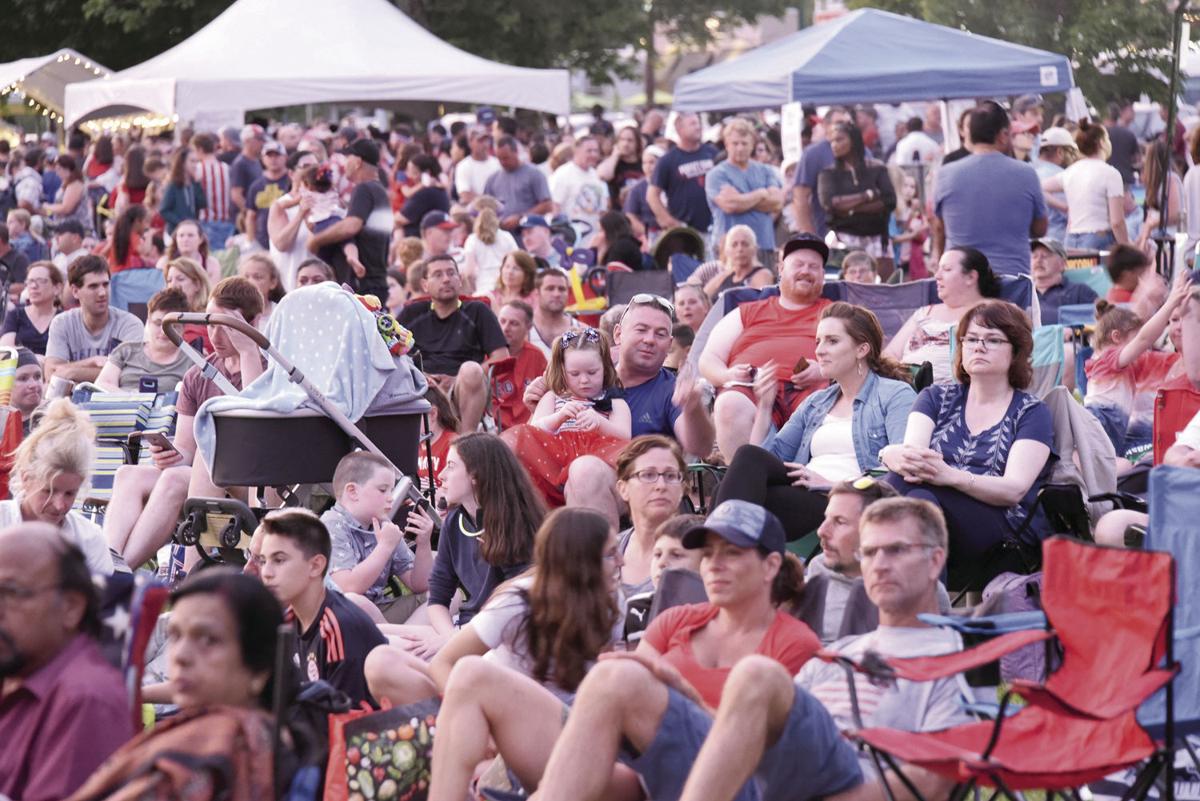 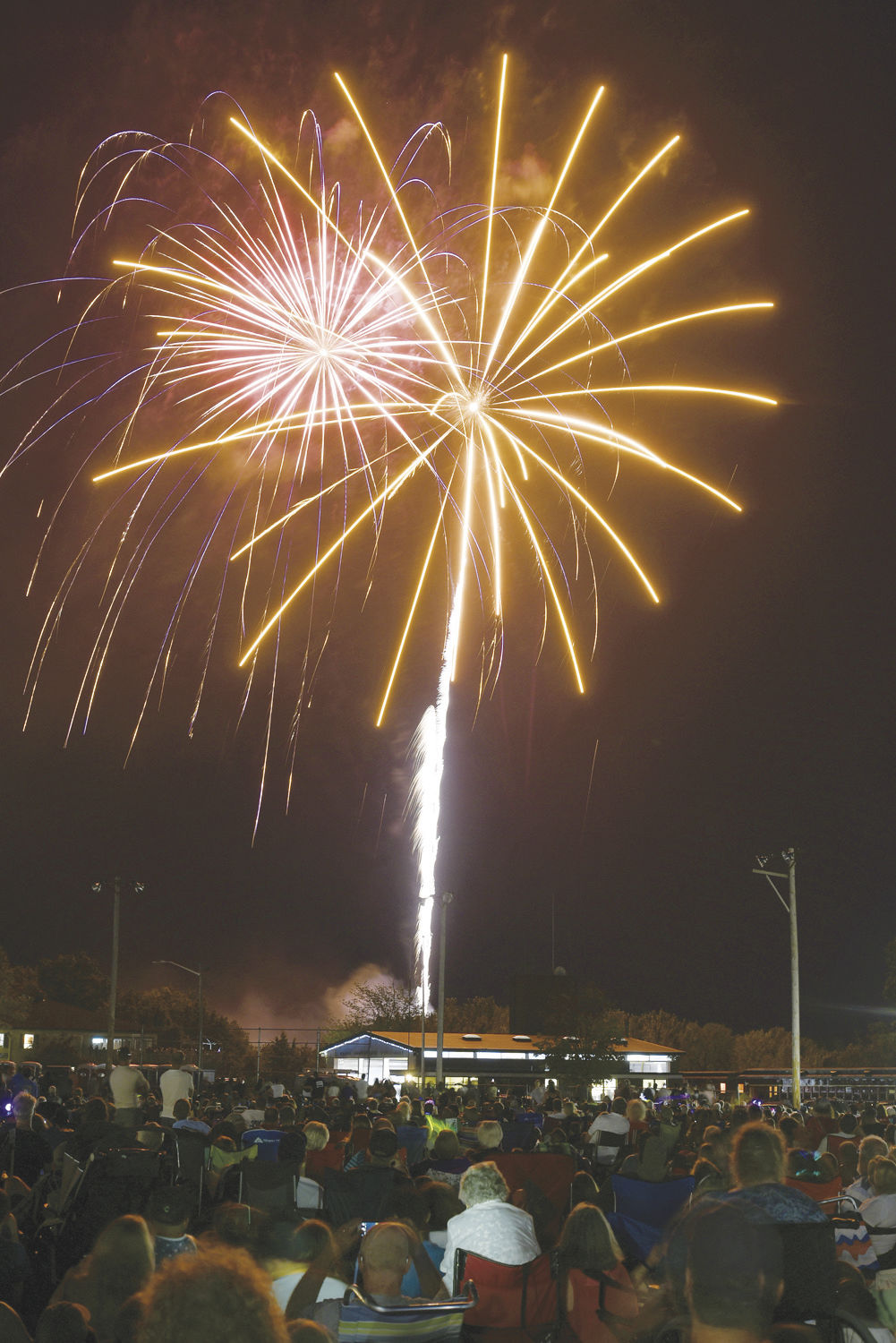 Thousands sit in Schouler Park and around the village of North Conway gathered to watch the 4th of July fireworks Thursday night. (JAMIE GEMMITI PHOTO)

Thousands sit in Schouler Park and around the village of North Conway gathered to watch the 4th of July fireworks Thursday night. (JAMIE GEMMITI PHOTO)

CONWAY — North Conway’s Schouler Park has played host to large crowds in the past, but town officials believe the one that filled the park on the Fourth may have been the largest yet in the village.

Thousands were in the park or its vicinity Thursday night, and despite it being one of the hottest Fourths — the first 90-degree day of 2019 in the Mount Washington Valley — things went off without a hitch.

“By 7 p.m., there wasn’t a blade of grass to sit on,” Michael Lane, assistant director of the Conway Parks and Recreation Department, said Friday. But, he added, "It was a very smooth day. From what I’ve been told, there were little to no issues."

(Meanwhile, Independence Day celebrations continue today at Bretton Woods Ski Area, with its annual Star-Spangled Spectacular. A $5 donation per car will be collected for a local charity at the gate. There will be family-friendly activities, live entertainment, food and fireworks. Bring your preferred seating. Gates open at 5 p.m. For more information, call (603) 278-3320 or go to brettonwoods.com.)

As for the crowd in Schouler Park, Conway police estimate 10,000 people attended the Fourth of July festivities, which ran from 3:45-10 p.m. and featured four entertainment acts, food vendors and a 30-minute fireworks show.

“I spoke with (Conway Recreation and Parks Director) John Eastman, and we both think it was probably one of the most heavily attended that we have seen in a very long time,” Conway Police Lt. Chris Mattei said Friday.

He said there were only two traffic accidents — "one at the intersection of Artist Falls Road and the North-South Road, when a driver headed east on Artist Falls Road failed to stop at the stop sign and struck a northbound vehicle, and one person was brought to Memorial Hospital, and another on Hurricane Mountain Road, when a 19-year-old west-bound driver veered off the road just inside the gate on the North Conway side. That driver was charged with DWI,” said Mattei.

North Conway Fire Chief Pat Preece agreed with Mattei on the turnout in the park. “It was definitely one of the largest crowds I have ever seen in town,” he said. “Even though we were packed, people really behaved themselves and celebrated the day the right way.”

Despite temperatures heading over 90, officials were prepared with a first aid tent.

“There were one or two people who needed a bottle of water," Preece said.

Mattei said there were two incidents involving drunkenness, leading to one individual being taken into custody. “We also had two juveniles who were separated from their parents, and we were able to reunite them,” he said.

Mattei commended officers and the public for the smooth dissipation of the traffic after the fireworks. “It normally takes 30-40 minutes, and even with that crowd of 10,000, it was dispersed within 40 minutes,” he said.

“I want to thank visitors and local residents alike for their cooperation and the staff of the Conway Parks and Recreation Department for putting on the great event. You know, there is so much negativity in the news, and it was really great to see everyone come together for an uneventful, trouble-free celebration,” Mattei said.

Susan Logan of Conway Scenic Railroad reported that the Firecracker Express, which picked people up at the Conway Village station, dropped them off in North Conway, then brought them back to their cars after the fireworks show, was also well-attended.

“With 423 passengers on the train returning to Conway last night, we were at 92 percent capacity,” she said. “Many people expressed their thanks for having the train shuttle as an option to driving and sitting in traffic.”

Also getting good reviews were the bands that entertained the crowds in the park: Act One Dance Company, Riley & Dan Parkhurst, Junco and Candie Tremblay & Fighting Fiction.

“We’ve heard nothing but good things,” Lane said. “We also had a lot of compliments about the fireworks.”

Conway’s celebration kicked off earlier in the day Thursday with a parade in Conway Village.

Serving as grand marshal was Phyllis Sherman of Sherman Farms.

“We were glitch-free,” Lane said. “It was well attended, a lot of great floats.”

The crowd in Schouler Park took a while to build, he said.

“I attribute that to the weather, it was hot,” Lane said. “It was more of a late-arriving crowd. But all of the vendors did very well. I know there were lines pretty much all night.”

He added: “I’d like to give a shout-out to our staff, who worked from early morning until late into the night. It was a team effort with a lot of moving parts. These folks did so much and most of it was done under the radar. You look at Schouler Park (Friday morning), and you’d never guess there had been thousands of people there less than 10 hours earlier.”

The parks and rec department received a number of compliments on its Facebook page.

Keri George of Conway wrote: “Amazing job by all. Friendly smiling faces even in the heat. Great night. Thank you so much!!!”

Lisa Robitaille of Albany agreed. “Great job. Another fabulous fourth in the books!!! Thank u!!!”

The heat is expected to continue for one more day. Temperatures again topped 90 on Friday.