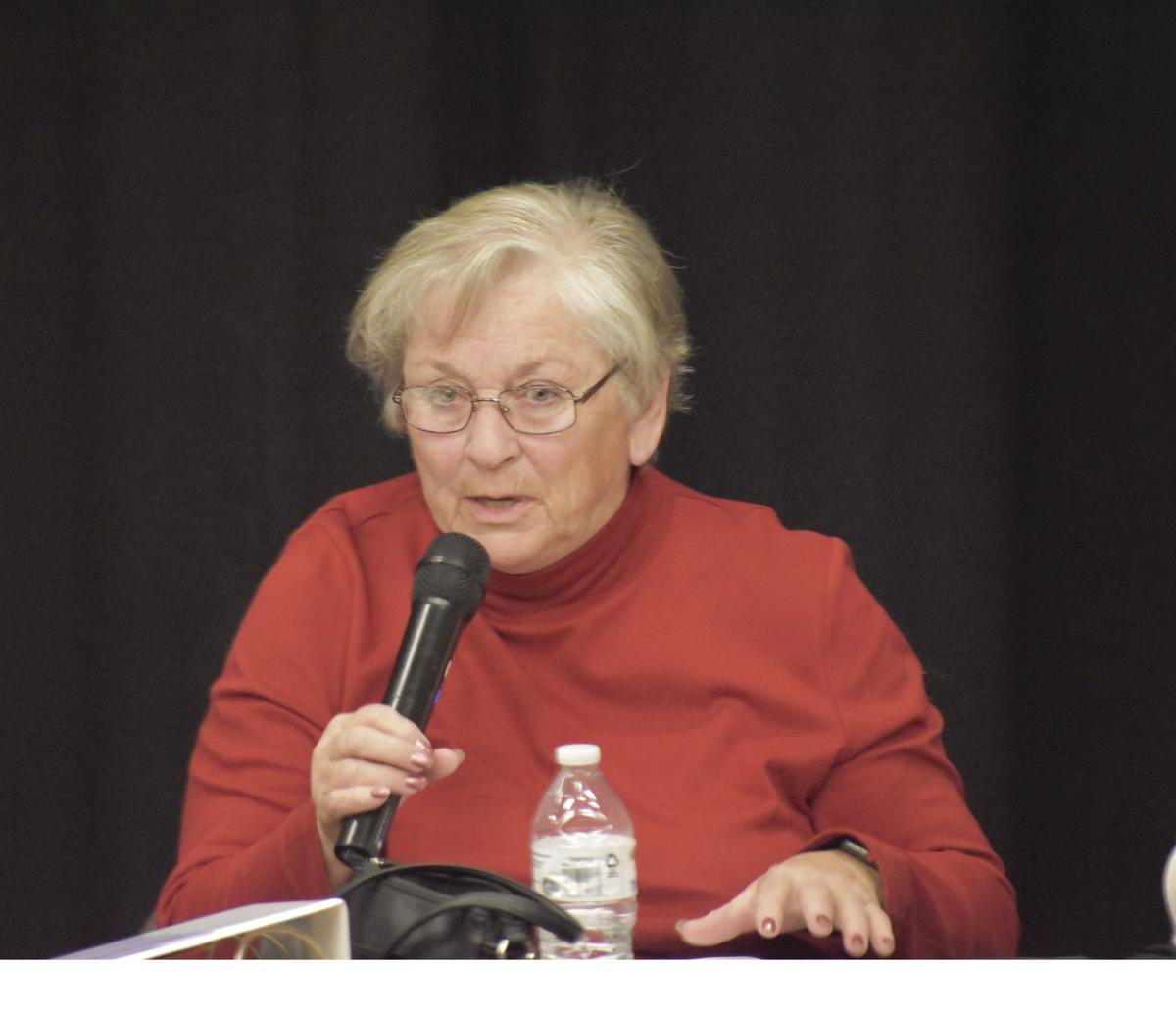 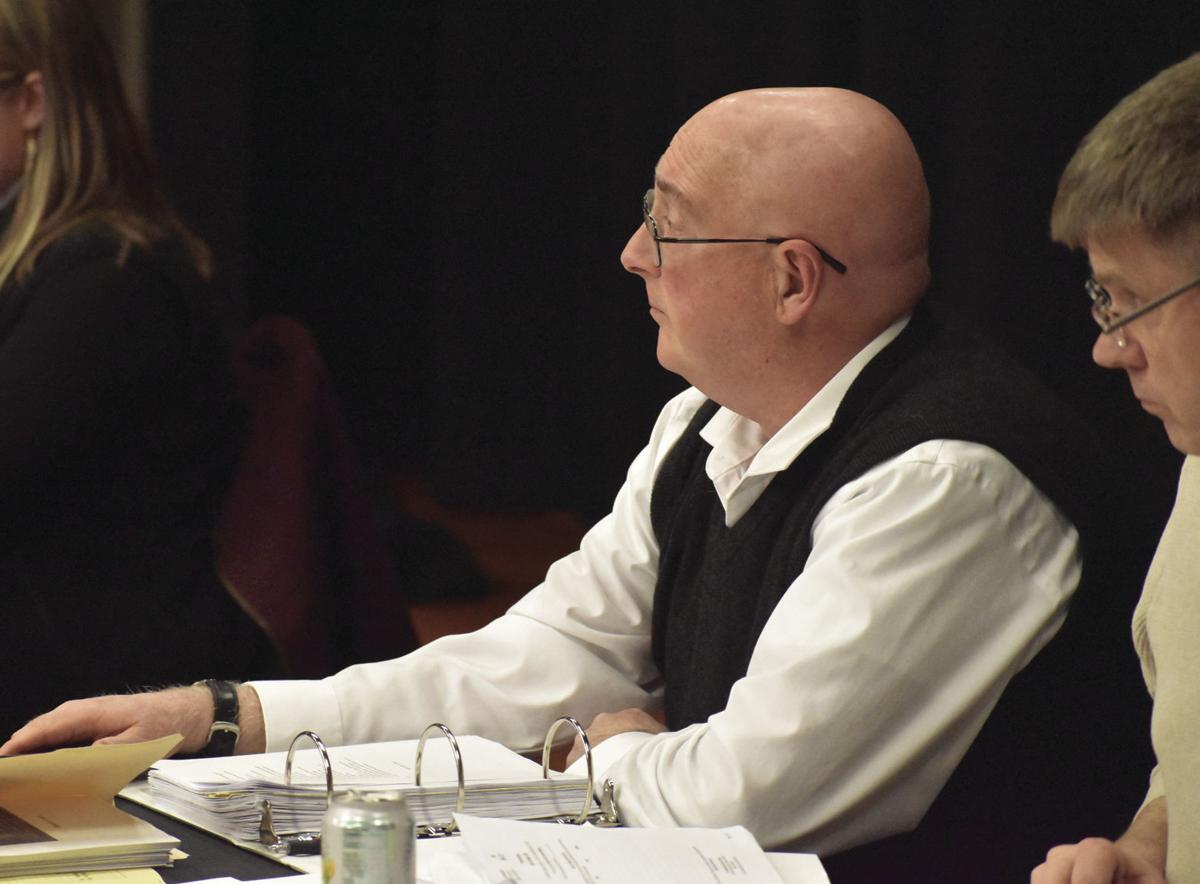 Budget committee chairman Jim LeFebvre Wednesday spoke out against a petition warrant article calling for an independent commission to redraw the state's political map after this year's census. Fellow budgeteer David Jensen, right, was among those to sign the petition. (DAYMOND STEER PHOTO)

Budget committee chairman Jim LeFebvre Wednesday spoke out against a petition warrant article calling for an independent commission to redraw the state's political map after this year's census. Fellow budgeteer David Jensen, right, was among those to sign the petition. (DAYMOND STEER PHOTO)

CONWAY — Petitioners are asking town voters to support a warrant article calling for an independent commission to do the redistricting that will draw the state's political map following the 2020 census.

Erik Corbett, the man behind the petition locally, said, "I don't think either party should be in charge of redrawing the maps and essentially picking their voters.

"There are some really funky districts drawn in the southern part of the state," he said.

Voting districts in New Hampshire are redrawn every 10 years. The last time they were set was in 2012.

The petition was created "to see if the town will urge that the New Hampshire General Court, which is obligated to redraw the maps of political districts within the state following the 2020 census, will do so in a manner that ensures fair and effective representation of New Hampshire voters."

It also requests that the New Hampshire General Court (the Legislature) "shall appoint an independent redistricting commission that draws the new district maps in a way that does not rely on partisan data such as election results or party registration or favor particular parties or candidates."

It also asks that, within 30 days of the vote, "the record of the vote approving this article shall be transmitted by written notice from the selectmen to the Town of Conway's state legislators and to the governor of new Hampshire informing them of the instructions from their constituents."

Residents will have the chance to discuss the petition (Article 42 on the warrant) at deliberative session on March 4. They will then get the opportunity to vote it up or down at the polls on April 14.

Corbett, who is past Carroll County Democrats chair, said an effort is afoot to have this article placed on warrants and ballots across the state.

Corbett, who moved from Bartlett to Conway last year, said there was a bill last year in the Legislature to do the same thing, but the governor vetoed it.

He said another bill is in the Senate right now, and these petitions are aimed at putting pressure on the governor.

The most egregious example of unfairly drawn districts, Corbett said, is Executive Council District 2, which spans the state and includes Concord, Durham and Keene. It was written to give one district to the Democrats and the other four to places that lean Republican.

John Colbath, the selectmen's representative to the budget committee, said the petition came into the town hall just before Tuesday's deadline and selectmen had not had a chance to review it yet.

Selectmen are to take it up at their meeting today (Tuesday).

"It's my understanding that it's an initiative that's going to be tried to be put on the warrant of every town in the state," said Colbath. "I don't know what political entity is behind the initiative."

In the past, the budget committee only dealt with articles that had a direct cost to the town. But because of a law change that was sponsored by former Rep. Frank McCarthy (R-Conway), the committee now may examine and endorse any article that comes before the town.

Steven Steiner was the only resident to offer an opinion on the article.

"If no one knows what it is, and we are talking about redistricting, you are nuts on voting yes on this," said Steiner.

Leonard told him she knows something about it.

"Essentially, it's saying that political parties should not be the decision-makers," she said. "It's saying that redistricting should happen by population shifts but it shouldn't be a political thing. It should be neutral."

Jensen asked budget committee chairman Jim LeFebvre said the committee should decide whether to recommend it or not.

He then spoke out against the article, saying that creating the commission would "take away the political responsibility from the New Hampshire General Court and lays it on a group of people who may or may not have been elected by the populace of the state."

But Cheri Sullivan, the school board representative to the committee, suggested that having the independent commission could be a way for the state to avoid legal battles.

"I think the goal is to make it equal and not be partisan," she said.

Meanwhile, former speaker of the House Gene Chandler (R-Bartlett), who has been involved in several redistricting efforts, said said such a proposal would be unconstitutional because the state constitution says it is the Legislature's job to draw the districts.

"That's a high hurdle to overcome," said Chandler in a Feb. 13 phone interview. He has been on the past two or three House redistricting committees and explained that bipartisan committees of lawmakers (one for the House and one for the Senate) draw the political lines. A majority of the committee is made up of whichever party is in control of that body.

The committees would coordinate to draw lines for the executive council and congressional districts. They draft bills that then go through the normal legislative process, getting approvals from both chambers before being signed by the governor.

"I think it's worked well for a number of years," said Chandler of the current process. "No matter who does it, there would be complaints," he added.

Chandler said changing who does the redistricting would lead to a different set of problems. There is no such article on Bartlett's warrant this year.

He said redistricting for the House in particular is "incredibly complex." He said not only do the districts have to divide up the population evenly between each representative, but they cannot cross county lines because each House member also has a seat on the county legislative delegations.

There can be no more than 400 state representatives and no fewer than 375.

"District 1 is so big it's unbelievable," said Chandler of the executive council district that stretches from the Canadian border to the Lakes Region, and includes Carroll County.