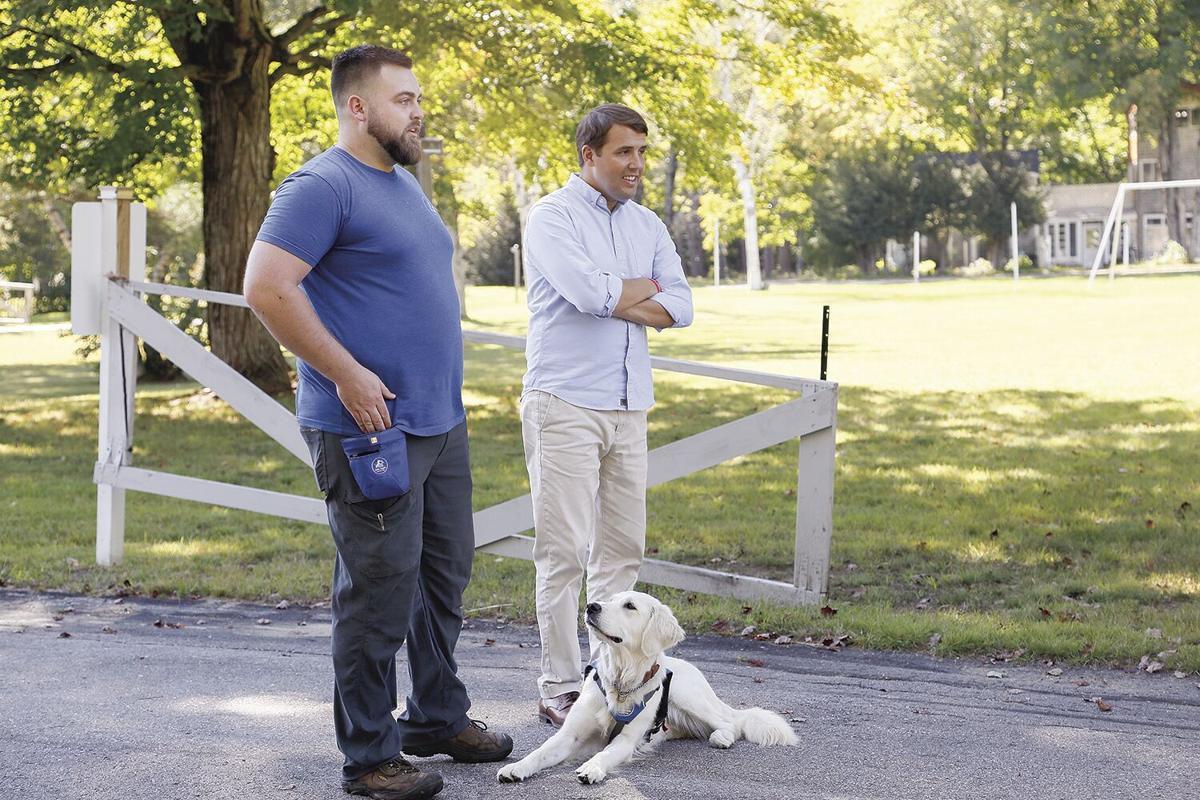 Congressman Chris Pappas (center) talks with Little Angels Service Dogs executive director Josh Drew (left) (and community outreach dog Nellie at their feet) about their facility and what they do while watching a scent-tracking demonstration on Thursday afternoon at the service dog ranch in Bartlett as Pappas made some local stops on a day out-and-about. (RACHEL SHARPLES PHOTO) 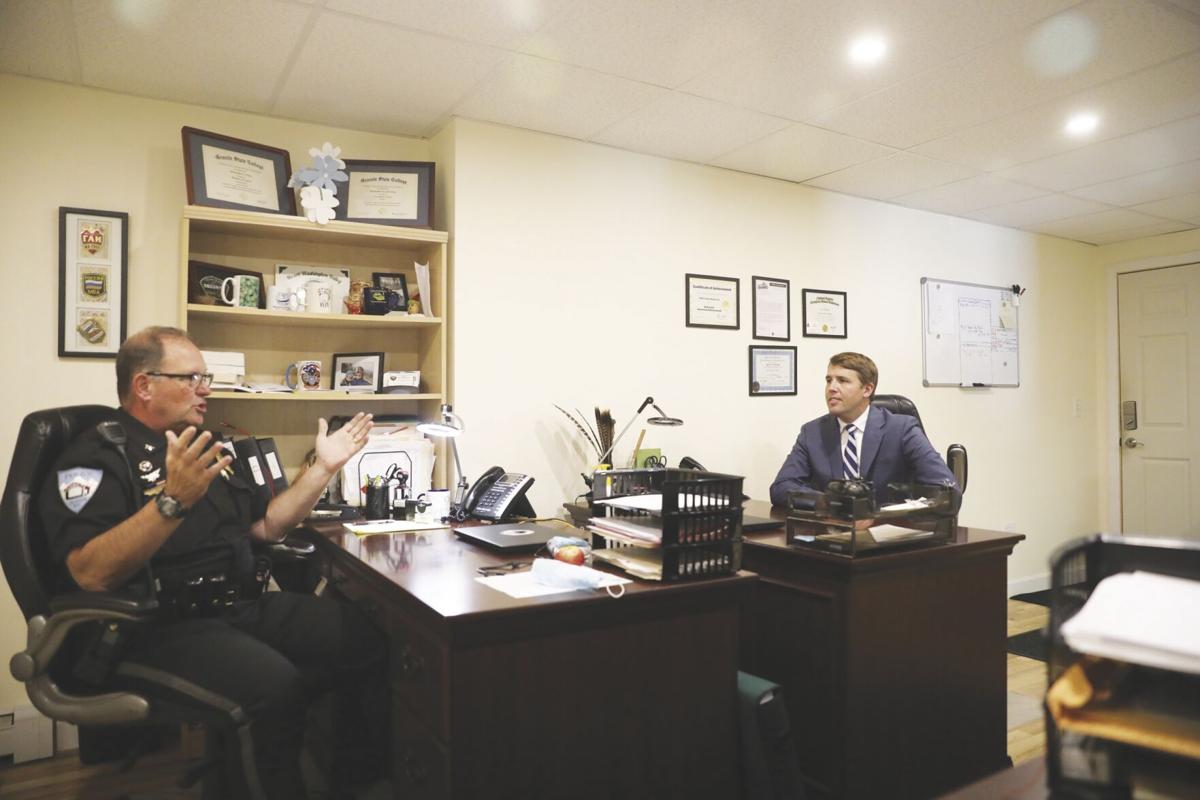 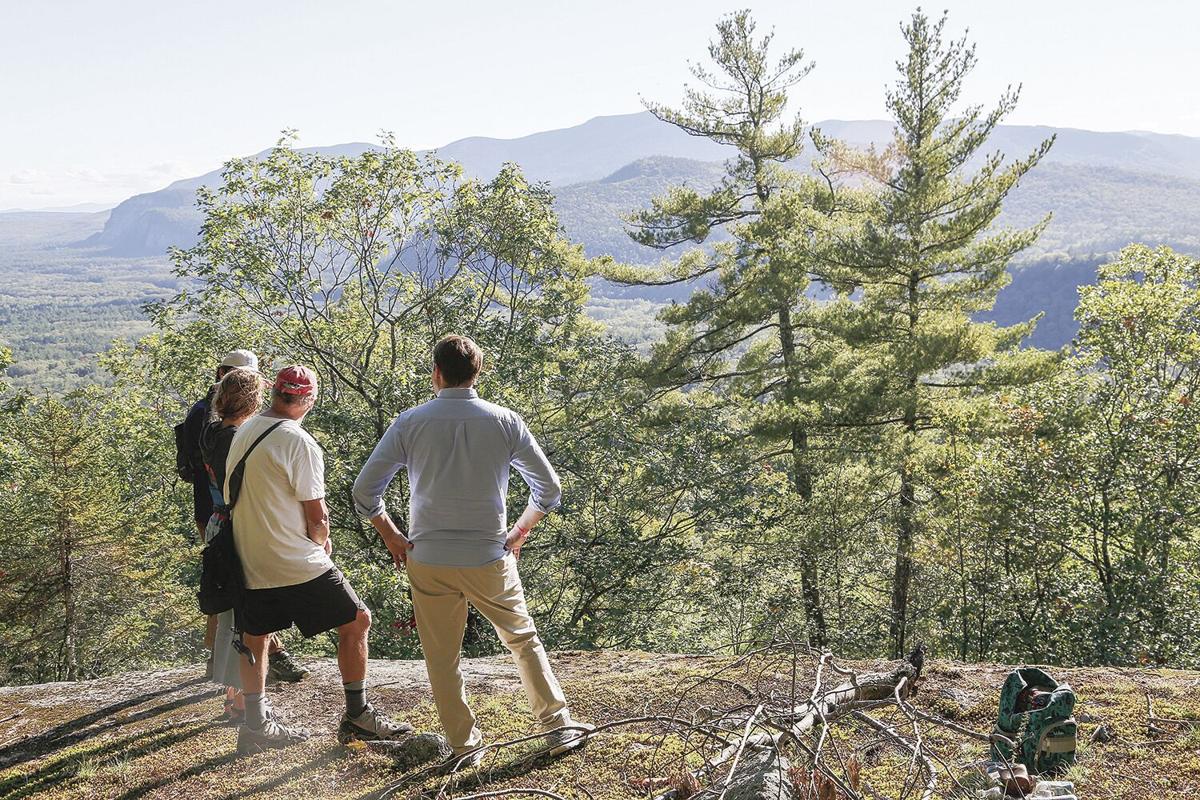 Congressman Chris Pappas (center) talks with Little Angels Service Dogs executive director Josh Drew (left) (and community outreach dog Nellie at their feet) about their facility and what they do while watching a scent-tracking demonstration on Thursday afternoon at the service dog ranch in Bartlett as Pappas made some local stops on a day out-and-about. (RACHEL SHARPLES PHOTO)

But first he stopped in for a visit with Jackson Police Chief Chris Perley at the police station in Jackson Village, where they discussed the work Chief Perley is doing with NH NAMI (National Alliance on Mental Illness) to incorporate the program into all the police department training in Carroll County.

From there, it was a short drive to Bartlett, where Pappas and his staff (community liaison Victoria Laracy, communications director Collin Gately and district director Kari Thurman) were greeted with a wagging tail by service dog Nellie as they arrived at the Little Angels site on Route 302.

Executive Director Josh Drew led Pappas around the facility, showing him the offices, the puppy barn and other buildings used to train the dogs.

Drew also talked about how Little Angels got its start in the area after his younger brother Ryan got his own service dog from the Little Angels facility in San Diego, piquing their interest in furthering the mission on the East Coast.

Pappas asked questions about where Little Angels gets their dogs and how the dogs are then partnered with individuals, especially veterans as he has worked on legislation to help get veterans with PTSD connected with dogs. Drew explained how some rescues are trained as service animals, but most of their dogs come from a special breeding programs designed to raise dogs with top-notch qualities for serving others. Drew also talked about how they receive many more applications for service dogs than they're able to give dogs to, so while they do help pair dogs with individuals of all kinds of physical and mental needs, often they point veterans to other services to avoid a very long waitlist.

Service dog trainers Spencer Simms, Ryan Drew, and Megan Jeske demonstrated dog-in-training Casey's skills in scent-tracking for Pappas. Casey, a golden retriever, will be paired with a child with autism, so he has been trained with the child's pajamas to locate the child if his parents couldn't find him.

In Congress, Pappas co-led the Puppies Assisting Wounded Service Members (PAWS) Act that establishes a competitive grant program through the Department of Veterans Affairs to pair ervice Dogs with veterans suffering from PTSD.

In the afternoon, Pappas met up with members of the Upper Saco Valley Land Trust at a trailhead on Dundee Road for a hike through the Dundee Community Forest. The group walked up to a ledge overlooking many of the local peaks in the Mount Washington Valley.

The 1,200-acre Dundee Community Forest, which is a partnership project between USVLT and the Trust For Public Land, is still in the works as the land trust has yet to close on the property, but Pappas spoke with Executive Director William Abbott and Abby King and Jeff Sires of the USVLT board about their plans once they do own the land.

Pappas, an avid outdoorsman, expressed how much he enjoyed hiking the property and learning more about the USVLT's mission. The USVLT is hoping to officially close on the property within the next six months depending on the success of the fundraising campaign and grant efforts.

Pappas voted to pass the bipartisan Great American Outdoors Act, which was signed into law last year. This legislation aims to preserve New Hampshire’s natural environment by providing permanent, full funding for the Land and Water Conservation Fund and creating the National Parks and Public Land Legacy Restoration Fund. This legislation fully funded the LWCF at $900 million annually. This fund is used each year to enhance and establish local, state and national preservation areas.

While walking back down from the ledge, Mark Dindorf, USVLT vice president and Hart's Location selectman, chatted with Pappas about the issue of broadband access especially in Hart’s Location. Pappas said he planned to look deeper into the issue.

Pappas also said he is signing to co-support the Newspaper Sustainability Act, which allows people and businesses certain tax credits for supporting their local papers. He stated, “It’s important to support local journalism.”