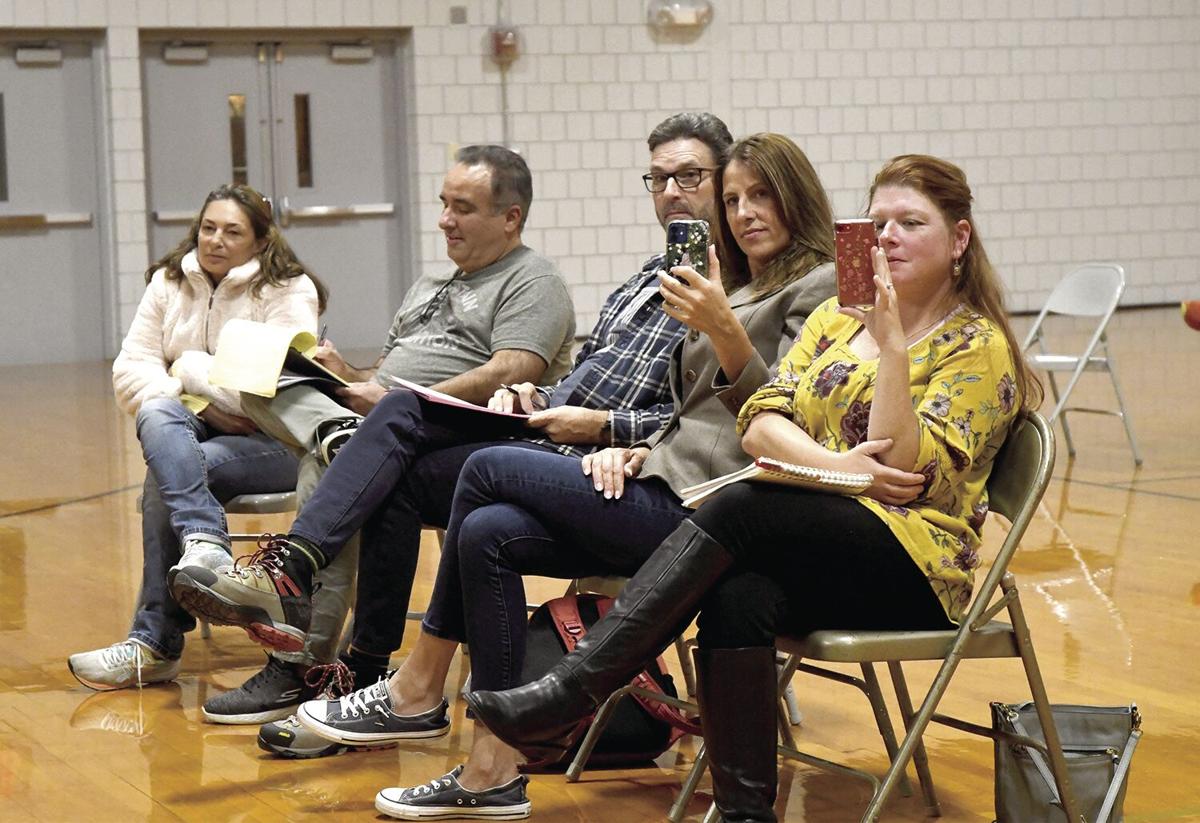 Citizens (from left) Nella Thompson of Eaton, Kevin Clifford of Madison, Robert Chase of Bartlett, Bibbs Dutton of Madison and Wendy Richardson of Conway do not believe public comments should restricted by the Conway School Board. (LLOYD JONES PHOTO) 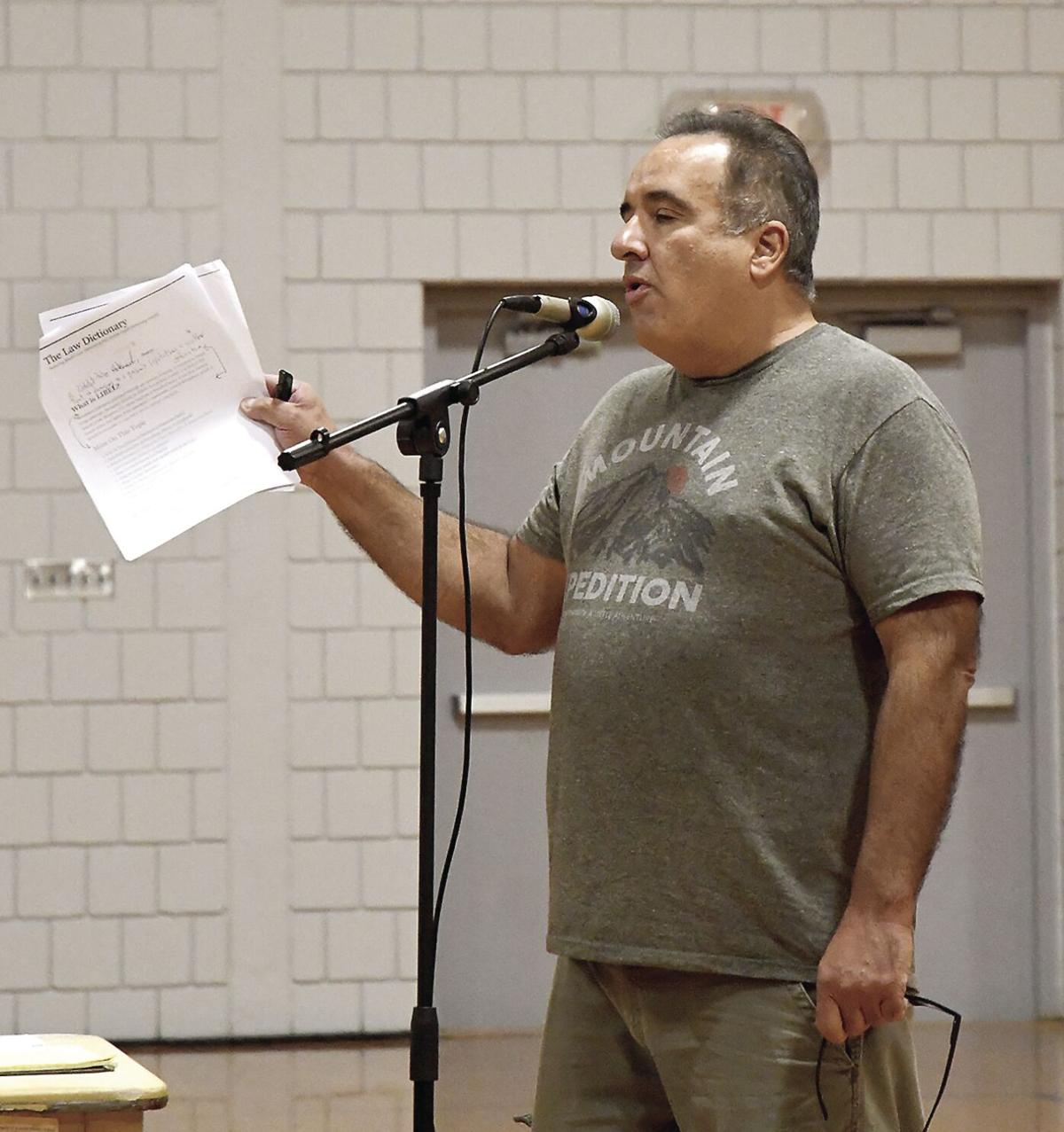 Kevin Clifford of Madison does not believe public comments should restricted by the Conway School Board. (LLOYD JONES PHOTO)

Citizens (from left) Nella Thompson of Eaton, Kevin Clifford of Madison, Robert Chase of Bartlett, Bibbs Dutton of Madison and Wendy Richardson of Conway do not believe public comments should restricted by the Conway School Board. (LLOYD JONES PHOTO)

Kevin Clifford of Madison does not believe public comments should restricted by the Conway School Board. (LLOYD JONES PHOTO)

CONWAY — A group of concerned citizens who have been regulars at recent school board meetings believes the Conway School Board’s new public comment policy is designed to squash their participation.

School Board Chairman Joe Lentini helped craft the policy, which was approved at a first reading Monday by a 4-2-1 vote. Policies require two readings. If there are no changes, the policy will come up for a final vote at the board’s Oct. 12 meeting. (For more on the policy, see related story.)

Lentini said at Monday’s meeting. “I think it’s very important that we have some control over what goes on at our meeting,” he said, adding that some citizens have stopped attending the meetings “because things have been so contentious.”

“I’m not exactly sure what your definition of ‘contentious’ is,” Kevin Clifford of Madison said during the second public comment session which lasted about 23 minutes on Monday.

Clifford is among the group that has been attending the meetings and spending several hours commenting on such topics as student mask-wearing and vaccines.

“We have the right to call you out,” Clifford told the board.

“It looks like you’ve got a small cabal going on here that’s trying to put together some censorship, and I don’t know where you’re getting your instruction from,” said Clifford. “Is it from (Mark) Zuckerberg and Facebook or Jack Dorsey (CEO of Twitter)?”

He continued: “You guys need to read the law. You should have an attorney come and talk to you about some of these cases that I cite you like New York Times vs Sullivan. This has been happening all over the country. As soon as you guys get some heat, it’s ‘Oh, let’s squash it.’ I don’t know what kind of contention there is here. We’re just telling you what’s on our minds. And, I’m telling you what’s on my mind. If you consider that contentious, I can’t help it.”

Clifford said the policy “says all speakers have to conduct themselves in a civil manner. How do you define that?” he wondered.

“‘Obscene, libelous, defamatory or violent statements will be considered out of order and shall not be tolerated. The board chair may terminate the speaker’s privilege if the speaker doesn’t follow this rule order.’ Where do you guys come up with this stuff?” he asked.

“The New Hampshire School Board Association obviously doesn’t like parents. They have a very long history of that. So obviously, they would want to squash our free speech rights.”

Clifford added: “What do you guys consider obscene? We’re living in 2021. Because you hear the F-word, is that obscene? Or if somebody gives you the finger? I can tell you they have every right to do it, not that I’m going to do it, but they have the right to do it.

“How you define obscene, I don’t know. But some definition and some school board chair like Mr. Lentini is going to get there and he’s going to say that this is too contentious. This is too obscene. It’s too vehement. And he’s going to cut you off. I can see it coming and the rest of you that voted for this should be ashamed. Really? We’re in America.”

“The other thing which I find kind of interesting is you actually use the word privileges in this document,” he said. “So us exercising our First Amendment right now is a privilege at the school board meeting according to you (pointing at Lentini), and you (Capozzoli), you (Jessica Whitelaw) and you (Joe Mosca) seem to think that’s OK, that it’s a privilege. You guys need to wake up, man, I’m telling you. You think that all this censorship is going to change anything. Those people aren’t showing up because it’s contentious. They’re not showing up because they just don’t show up. Do you think that this policy is going to make any changes?

Fellow Madison resident Bibbs Dutton was also frustrated not only with the board but with the Sun.

“Lots of discussion about the F-word, I’m the one that did it,” Dutton said. “I did it in a passion trying to make my point. Lloyd (Jones, education editor) put it in the paper, quoted me. Thank you for quoting the fact that I actually apologized, and I did.

“But the thing is, you only put (the F-word) in this whole discussion,” Dutton continued.

“I actually had three minutes, three minutes of discussion. And you never once mentioned anything else that I said except for that. I have had bullying, text messages, emails. People have personally called my home. I have been bullied because of what you put in the paper,” she said.

“And had you put all the other items that I had actually talked about, which actually would make my (F-word use) relevant, I wouldn’t be in this position right now.”

She added: “We are not extreme crazies. We are passionate parents who want the world to be better for our children and yours.”

Dutton shared a meme she found on Facebook: “If you leave your children in a world where you’ve never stood up, they’ll inherit a world where they were they will never be able to stand up for themselves.”

Later in public comments, Clifford returned to the microphone to ask Lentini about the application process for filling the newly vacated school board seat with Monday’s resignation of Courtney Burke.

“What I was asking for is that people put what they think qualifies them to be eligible,” Lentini replied.

“So what qualified you to be on the school board when you first took this job?” Clifford asked. “It’s like many of the correspondences I sent to the board. It’s crickets — chirp, chirp, chirp — that’s what I hear from you guys. That’s the problem with you guys. You want to restrict our speech here. I can’t even get you to answer my emails, so where am I supposed to address you? Out in public.”

He added: “Please post the qualifications because I’ll be looking for someone to fill that position. And, then I’m going to be helping by using my money to figure out a way to unseat you. And unseat the rest of you American traitors.”

“You know we can try,” replied Clifford. “I’m not sure I’m going to be successful but I’ll use my own money because people like you who are trying to squash our speech should not be sitting in these positions.”

CONWAY — The Conway School Board took a step toward adopting a public comment policy after approving the first reading Monday night.

It folks were not rude and disrespectful when they show up and offer comments, they might be taken more seriously and appreciated. The attitude you present is the attitude you get back.