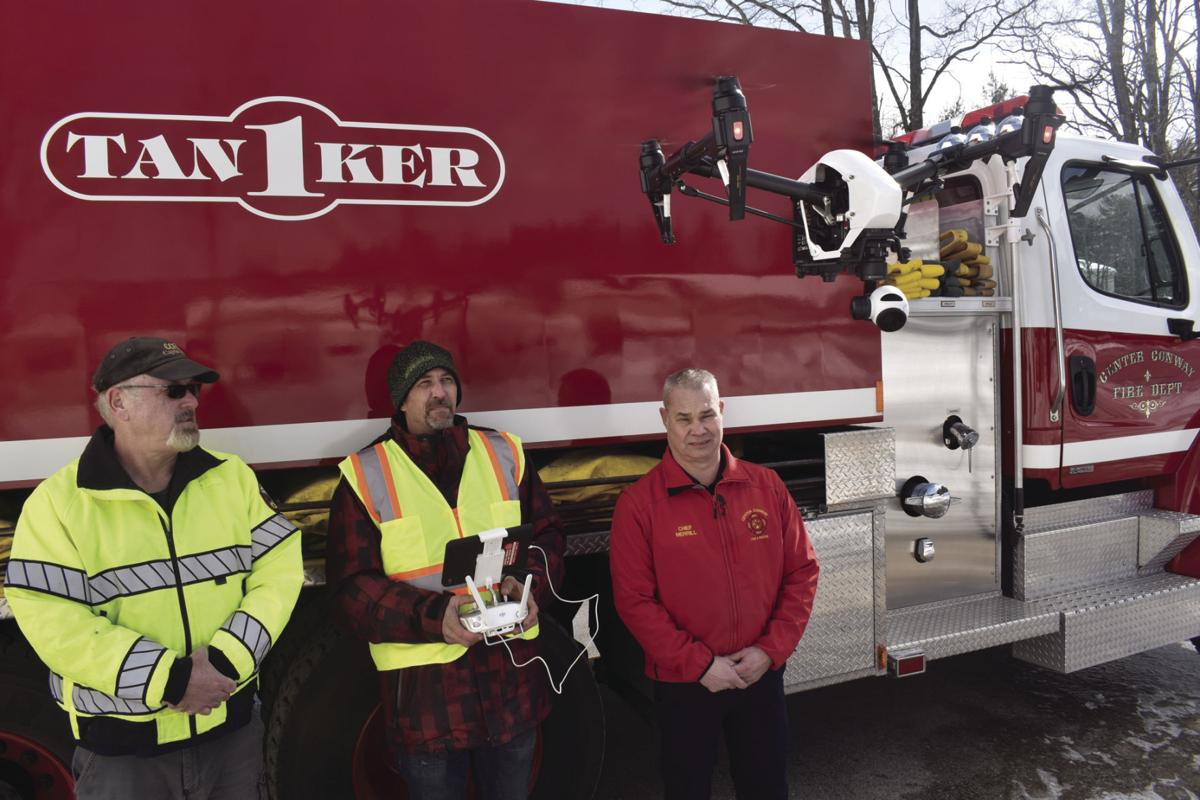 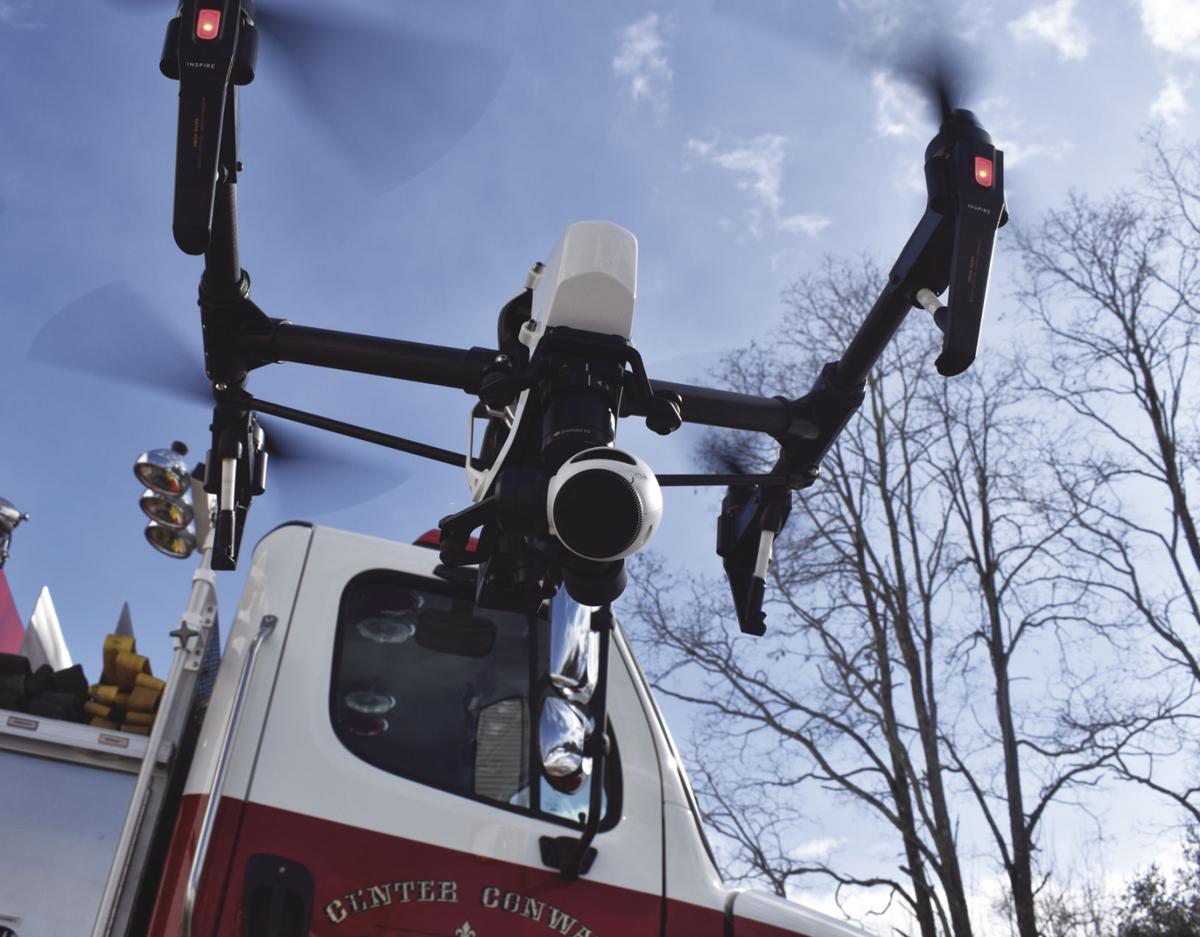 CONWAY — While Laconia police are just starting to dabble in the use of drones, the Center Conway Fire Department has been using them for years to assist with search and rescues and forest fires.

Center Conway Fire already has such an UAV costing $10,000, with perhaps half of the cost paying for the infrared camera.

The Center Conway department’s drone pilot is Jason Bagley, 49, an FAA-approved search-and-rescue UAV operator who is a member of the nearby Redstone Fire Department (he flies drones for them, too).

Bagley has five drones of his own, which he frequently utilizes for rescues. Bagley has been a search-and-rescue UAV pilot since 2014.

Redstone Chief Neil Henry also flies his own personal drones and uses them for calls like brushfires. He has also piloted the Inspire owned by Center Conway.

“They are going to be a common thing down the road,” as prices go down and people become more accustomed to them, Henry said. “They are pretty handy.”

Center Conway’s unit is made by DJI Inspire, a Chinese brand that is headquartered in Shenzhen, widely considered China’s Silicon Valley. At the forefront of drone development, its offices can be found in the United States, Germany, the Netherlands, Japan, South Korea, Beijing, Shanghai and Hong Kong.

Other area fire departments have asked Center Conway to assist them with their drone, as has the Conway Police Department.

According to Bagley, he and his drone respond to all mutual aid calls. “Anybody that requests us, we’re available, we fly it.”

Last year, Henry flew the Inspire on behalf of Center Conway in Moultonborough to help find a missing person at night.

Bagley also has used it locally on Saco River rescues to spot brush fires and to help police a find missing persons in various places.

“Eyes in the skies are better than eyes on the ground,” Bagley said.

Center Conway Chief Glenn Merrill said the drone allows searchers to cover a large amount of area in a short time with less manpower than would otherwise be needed. This comes in handy when looking for brushfires in remote areas.

“We we can fly the drone and pinpoint where (the brushfire) is, and we can give (fire units) the coordinates to it,” said Merrill, adding they’ve done that in Tamworth.

He said the fire in Tamworth was on the top of a mountain, which would take an hour to hike to. He said it took the Inspire 30 seconds to fly to it. The drone was used to find a water supply. The Inspire can fly at 43 mph. It has a maximum range of about 2 miles depending on the weather.

Merrill said they also used the Inspire to help North Conway to check out a collapsed roof in Birch Hill.

“Theoretically, we could actually be able to see through a building for heat signatures, for a victim,” said Norris, while adding, “Can’t say we’ve tested that.”

The firefighters said the camera on the Inspire should be sensitive enough to see a victim’s body heat through the walls of a house. It also feasibly could pick up hidden hot spots during a house fire.

“That’s why that camera costs so much stupid money,” said Norris.

If the Center Conway Fire Department were summoned to do a rescue on Conway Lake, Bagley said he would bring his Phantom UAV because it can carry objects like rope and a life preserver.

Bagley can fly objects of up to 3½ pounds with the Phantom.

The drone also can be used to locate a victim in Conway Lake. “So as the crew is dispatching, we have a boat; another crew can put that drone out there and do a preliminary search before the boat is even in the water,” said Norris.

Bagley pilots the UAVs with remotes synced to an iPad or an iPhone. The screens allow him to pay close attention to how much flying time he has left. A signal also is sent to a monitor in the department’s command vehicle so the chief can see what the UAV’s camera captures.

Merrill and Norris said Conway is lucky to have Bagley, with all the training, experience and equipment he brings.

Bagley said it took him about 70 hours to do all the paperwork to earn his FAA approvals. Much of that had to do with safe flying through different weather conditions. He said the Inspire can fly in winds of up to 23 mph.

Norris said UAV piloting requires a lot of practice to get good.

The FAA has strict rules about who can fly where. Bagley is exempt from many of those rules when responding to an emergency. Hobbyists must stay under 400 feet and are barred from flying over major infrastructure or crowds. Recreational flyers cannot fly from New Hampshire Department of Transportation property. The White Mountain National Forest requires written permission.

Merrill said he encourages people to think about joining the department and said they would be happy to include those with an interest in drone-flying.

The Inspire doesn’t require much in the way of maintenance, say the firefighters, adding they do have to keep the batteries charged. A charge can last about 23 minutes. The department has five batteries for the Inspire.

“There is an automatic setting on it so when that battery gets to a certain level, it will come back to the home location,” said Norris. “So you’re not gonna drop out of the sky.”

Bagley has two small, camera-equipped UAVs that could be flown inside buildings to look for victims.

The DJI Spark drone is about 5 inches in length and could be used in houses.

The DJI Mavic is bigger and could be used in schools and big box stores.

Even with all those advantages, there aren’t likely to be a huge number of first-responder drones flying over Conway any time soon.

Conway Police Chief Ed Wagner said it’s not cost-effective for the police department to have one and Conway Police Lt. Chris Mattei said the police asked to have Center Conway’s help during a search for a missing person over the summer.

Conway Village Fire Chief Steve Solomon said quality drones are expensive and cited a “myriad of laws” such as restrictions from NHDOT and the National Forest about where and how to use them.

“There are privacy issues with flying drones over private land,” said Solomon.

“Who owns the airspace? These are just examples. There are other rules as well, and each year we see new rules proposed.

“It’s simply too difficult for a small department to smartly and successfully manage a drone program.

“Should Conway Fire Rescue really need a drone for something, there are private contractors that can be utilized,” Solomon said.