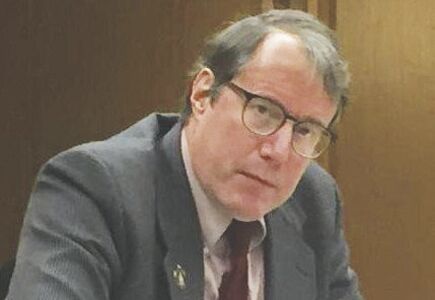 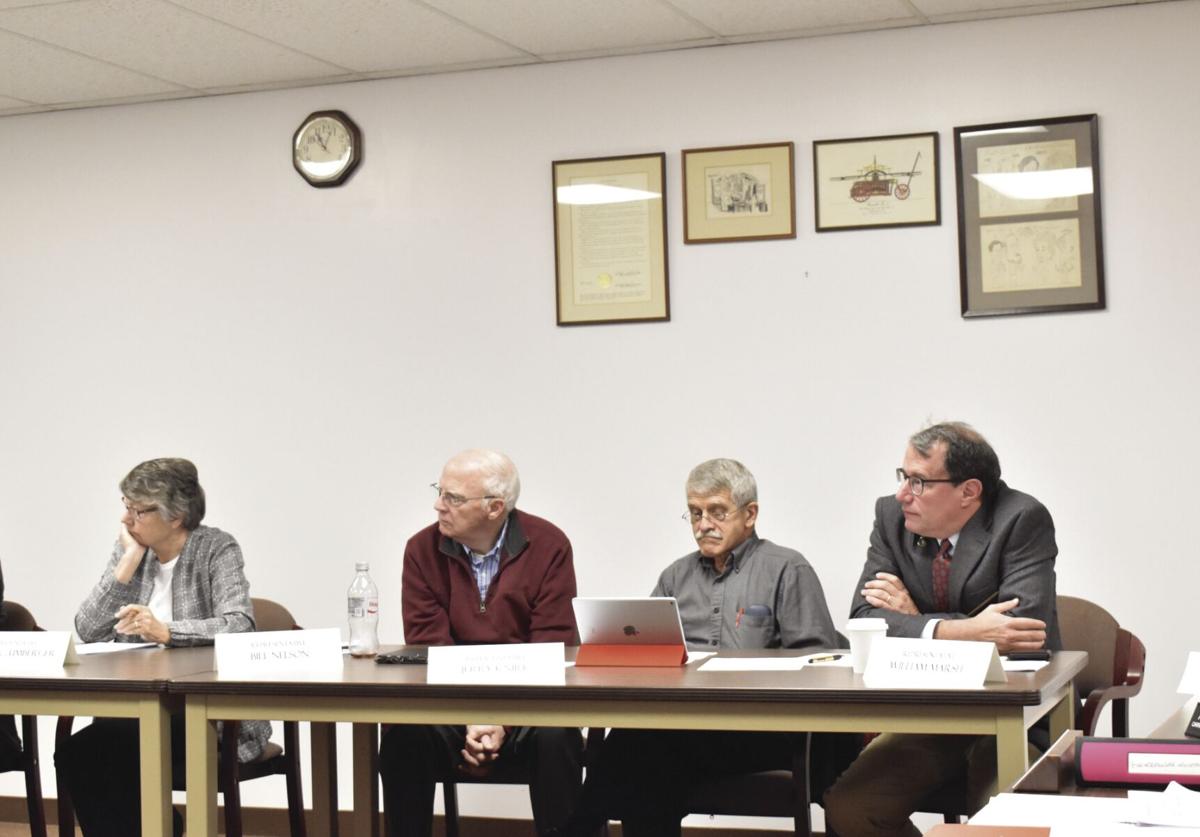 State Rep. William Marsh (right) is seen at a delegation meeting in 2017. With him (from left) are state Reps. Karen Umberger (R-Conway), William Nelson (R-Brookfield) and Jerry Knirk (D-Freedom). They were discussing Marsh's motion to support assisted living in the county. Marsh switched political affiliations Tuesday, saying he is fed up with the N.H. Republican Party. (DAYMOND STEER PHOTO)

State Rep. William Marsh (right) is seen at a delegation meeting in 2017. With him (from left) are state Reps. Karen Umberger (R-Conway), William Nelson (R-Brookfield) and Jerry Knirk (D-Freedom). They were discussing Marsh's motion to support assisted living in the county. Marsh switched political affiliations Tuesday, saying he is fed up with the N.H. Republican Party. (DAYMOND STEER PHOTO)

CONCORD — State Rep. William Marsh of Brookfield has switched parties, releasing a statement Tuesday that he was opting to leave the Republicans to become a Democrat. Marsh said he made the decision following a series of disagreements with GOP leadership over vaccines and the handling of the COVID-19 pandemic.

In a statement he shared at noon Tuesday, Marsh said: “Just now, I met with the Town Clerk of Brookfield and officially changed my party affiliation to Democratic.

“The events leading up to this are public information. On June 3, I spoke on the House floor against Amendment 1864h to SB 155 — an amendment which would have restricted our ability to control the spread of COVID-19 in N.H. much as Gov. (Ron) DeSantis (R-Fla.) has done in Florida. That speech is printed on page 148 of House Journal 8.

“Consequent to that speech, I was removed from the Vice Chairmanship of the Health, Human Services and Elderly Affairs Committee,” said Marsh, who is an ophthalmologist.

“This summer has provided me time to consider what my beliefs truly are. Politics is really a team sport. I have come to realize a majority of Republicans, both locally and in the N.H. House, hold values which no longer reflect traditional Republican values.

“And so I am recognizing the reality that today’s Republican Party is no longer the party I first joined when campaigning for President (Ronald) Reagan many years ago. Further, I feel the local Carroll County Republicans and Winnipesaukee Republicans have been taken over by extremists who see no place for moderates like me in the Republican Party.”

Marsh had planned to “quietly finish” his term and then enjoy retirement, but “unfortunately events have forced my hand,” he said.

“As we all know, the combination of the infectious Delta variant and waning immunity is causing COVID-19 to surge both in N.H. and throughout the United States,” he stated.

“ICUs are filling up and younger people are getting sick and dying. The American Academy of Pediatrics recommends vaccination of children over age 12 and masks in schools as control of this virus will require multiple interventions.”

Marsh added: “Maintaining in-person education is a priority, and we need every tool to do that for our children.”

“The constitutionality of vaccine mandates is well-established by the 1905 precedent of Jacobson v. Massachusetts, which upheld mandatory smallpox vaccinations,” he stated.

“In a civilized society, individual rights are limited when they start to impinge on the rights of others. By denying the appeal of Klaassen v. Trustees of Indiana University to the United States Supreme Court, Justice Amy Coney Barrett upheld this precedent, allowing a university to require COVID vaccinations.

He added: “I was a physician long before I became a representative. Doctors live by the principle ‘first do no harm.’ I cannot in good conscience support this selfish refusal to take reasonable precautions.

“And while I might wish for a viable third party, the reality in our country is that does not exist. So far, N.H. has done remarkably well with COVID by taking all reasonable precautions while carefully reopening our economy. I was proud to be part of the Governor’s Economic Reopening Taskforce that made that happen.

“I cannot stand idly by while extremists reject the reasonable precautions of vaccinations and masks which made that happen. And so I have reluctantly changed my party affiliation. I urge others to consider what is happening and come to their own conclusions.”

Fellow physician and state representative Dr. Jerry Knirk (D-Freedom) said he had many conversations with Marsh as he wrestled with whether to leave the GOP.

“He emailed me before (Tuesday’s) event,” Knirk said by phone Tuesday. “He and I have had many long conversations about this.”

Knirk said Marsh had considered either going undeclared or choosing to join the Democratic Party.

“I’m glad he made this change,” Knirk said. “Bill is as driven as I am by science and actually values public health. Unfortunately, there are some in the Republican Party who do not value science or pubic health.”

He added: “Bill was good in the Republican Party. He was a voice of moderation. Sadly, his party wouldn’t listen to him or put up with him. I told him the Democratic group has a very large tent. It’s not monolithic at all. We disagree in our caucuses often, and I told him he could easily fit in and in our party it’s OK to agree to disagree.”

Knirk said GOP leadership had planned to strip Marsh of his committee assignments.

“Instead of giving leadership the luxury of doing that, Bill decided to control his own destiny,” he said. “We would love to have him back on the Health and Human Services and Elderly Affairs committees.”

“Today’s political stunt was shameful but no surprise. This is the same House GOP that attempted to hide a super spreader event from the public last November and spent tax dollars refunding businesses that were fined for ignoring the governor’s safety guidelines. From the start of the pandemic, N.H. Republicans have been working overtime to mislead the public, feed into conspiracy theories, and disrupt common sense efforts to slow the spread of COVID,” Cushing said.

“Vaccination is our path out of the pandemic. While Democrats are working to keep the economy open, Republicans are doing everything they can to force us back into lockdown. The Speaker’s rants about vaccines today were nothing more than an attempt to fuel flames of discontent and directly conflicts with his message to the House that he ‘wished he had a list’ of members who were vaccinated.

“Today’s antics were so extreme that longtime Republican Rep. Bill Marsh changed party affiliation because he ‘cannot not stand idly by while extremists reject reasonable the precautions of vaccines and masks.’ We welcome Rep. Marsh to the Democratic Caucus where common sense prevails.”