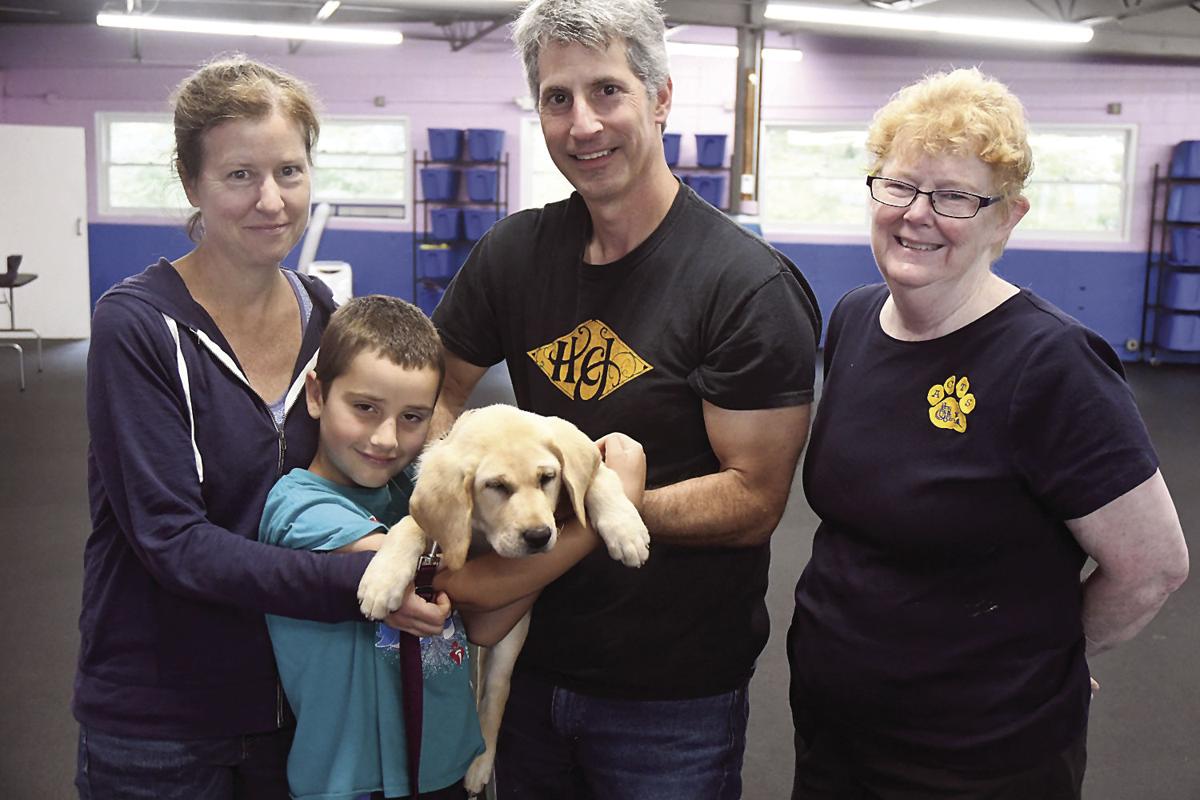 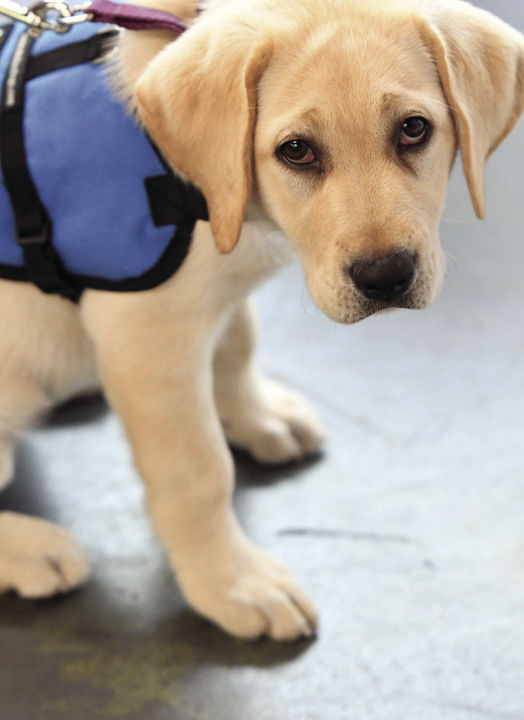 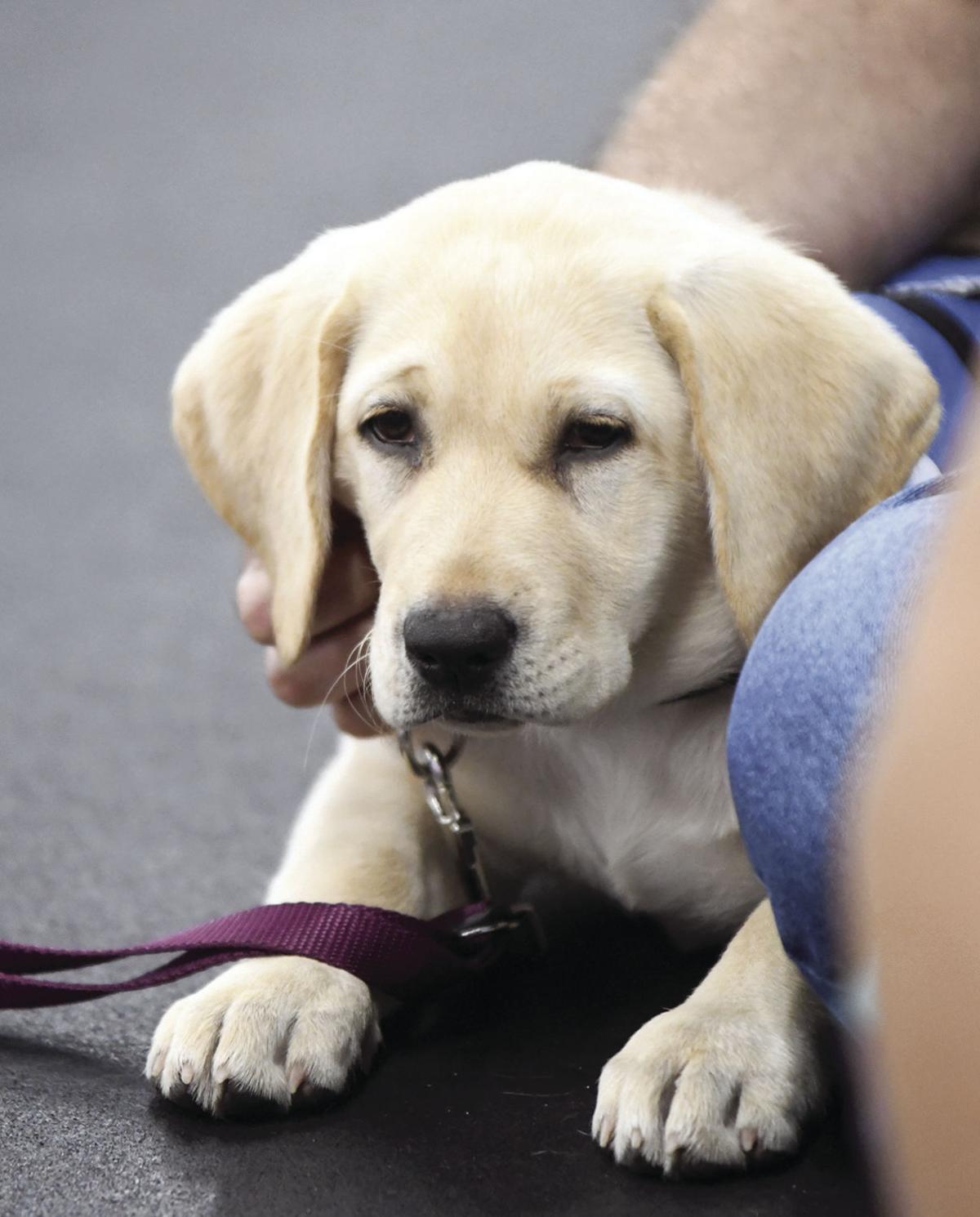 On Thursday, Feather met her family for the next two years, the Alkalays: Ed and Barbara and their three children — Sam, 15, Leah, 14, and John 8 — who live in Albany and are first-time puppy raisers for the local program.

Ed, 52, an attorney at Alkalay & Smillie PLLC in Conway, thinks so much of the program he agreed earlier this month to serve on the board of directors for A.C.T.S.

“I think Leah was the driving force in us becoming puppy raisers,” he said while seated on the floor at Telling Tails Training Center in Fryeburg, Maine, with Feather resting her head on his leg.

“We’re a family that loves to have animals. We have a dog, we have a cat, and we have fish."

But he said his daughter was asking for another pet, "and we were like, no, we have enough in the house right now." But then, he said, "We heard about this opportunity.

“It’s win-win because we love animals. We want animals in the house, and this is an opportunity to not only have an animal in the house but to do something really positive. Hopefully, in two years, some will get a service dog.”

A.C.T.S. was started in Center Tuftonboro in 2007 and moved to the Mount Washington Valley in 2014. Since then, the volunteer-run non-profit has graduated 30 teams.

Robin Crocker, 62, owner of Telling Tails and A.C.T.S.' head trainer, spoke about what’s next for Feather.

“Feather will go through the program like all of the rest of them,” she said. “She’ll learn foundation skills, she’ll learn to tug, how to fetch and how to nudge with her nose."

Those skills will come into play either for service dog work or therapy dog work for Feather, she said, "depending on which way she goes.”

Susquehanna, according to its website, “has placed over 300 dogs with people throughout Pennsylvania and the surrounding states.”

Crocker said: “They have a breeding program and are part of a cooperative that is involved with Assistance Dogs International, and we’re part of that cooperative even though we don’t breed,” Crocker said. “Being part of that, we receive a puppy three or four times a year from another organization that has been specifically breeding for assistance dog or service dog work."

She added: "We have one other co-op puppy right now, Fennel, and we have another one arriving from North Carolina on Saturday."

Feather will go to work at the Tech Village with Ed and Barbara on a daily basis, along with Gus, the family’s 9-year-old black Lab.

“We plan on taking her a lot of different place,” said Barbara, 54.

Of the Alkalays, Crocker said: “I think this is really going to be a good fit.”

Feather also will spend the next eight weeks enrolled in the A+ Puppy Program, which meets once a week.

When Feather reaches 14 months, A.C.T.S. officials start to think about what might be the best match for each puppy.

“Human and dog teams are matched based on a number of criteria, including temperament, lifestyle and required skills,” Cocker explained.

“With a match in mind, we will start to work on the specific requirements of each client. Dogs generally complete their training at the age of 2. Once the dogs are ready to meet their new partners, the dogs and clients train with us for two weeks,” she said.

“We have a person for the puppy coming on Saturday,” she said. Of other dogs that may be coming, she said, "how many of those we’ll be able to take will be dependent upon the number of puppy-raisers we can get.”

It’s always hard for puppy-raisers to say goodbye, but they also realize that thanks to their help, the dog will go on to make a disabled person's life much easier.

“We can’t imagine it not being difficult in some ways, but we know what we’re getting into,” Ed said. “We know that two years from now, she’s not going to be with us.

Puppy-raisers are supported by a team of volunteers that include Big Sisters, who provide moral support and logistic support with equipment, food and vet care; Aunties and Uncles, who help during field trips, practices and when they are unable to care for their puppies; regional trainers, who run weekly sessions in Fryeburg and Raymond, Maine, and in Center Tuftonboro; and administrators and board members who keep the organization running smoothly.

“It truly takes a village to raise an A.C.T.S. puppy,” Crocker said.