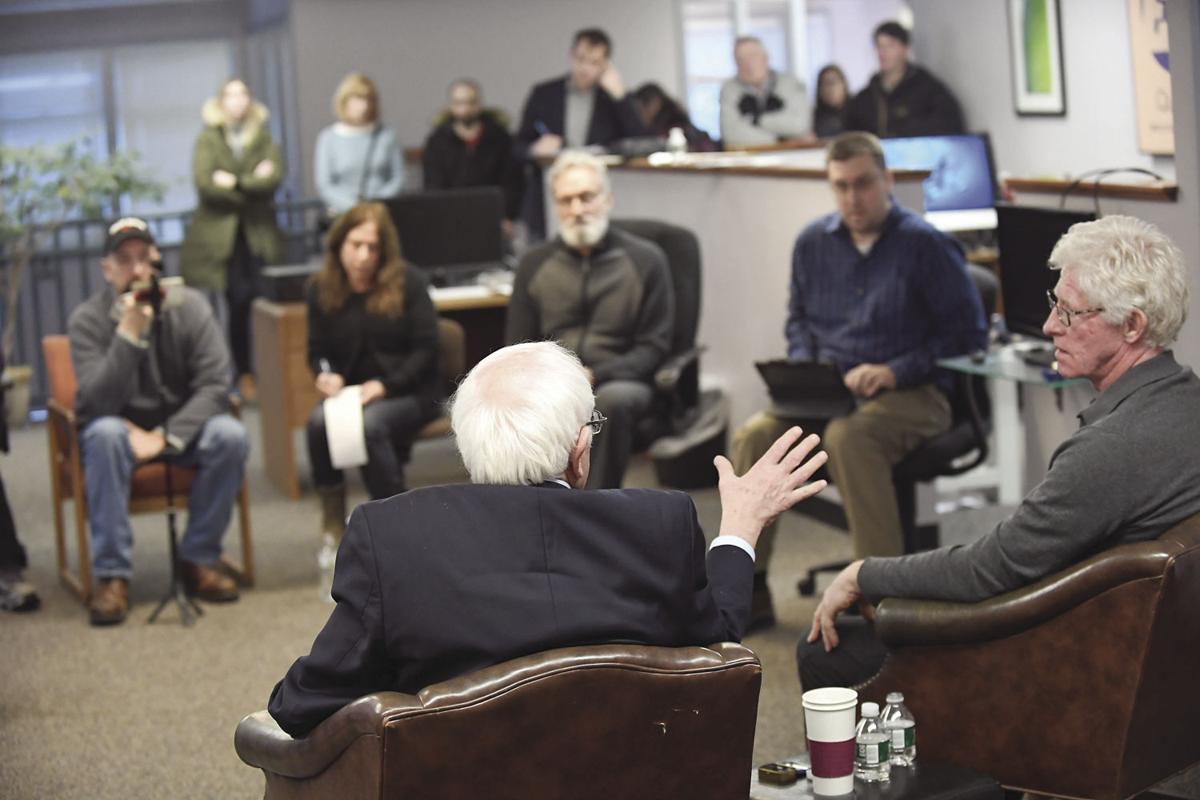 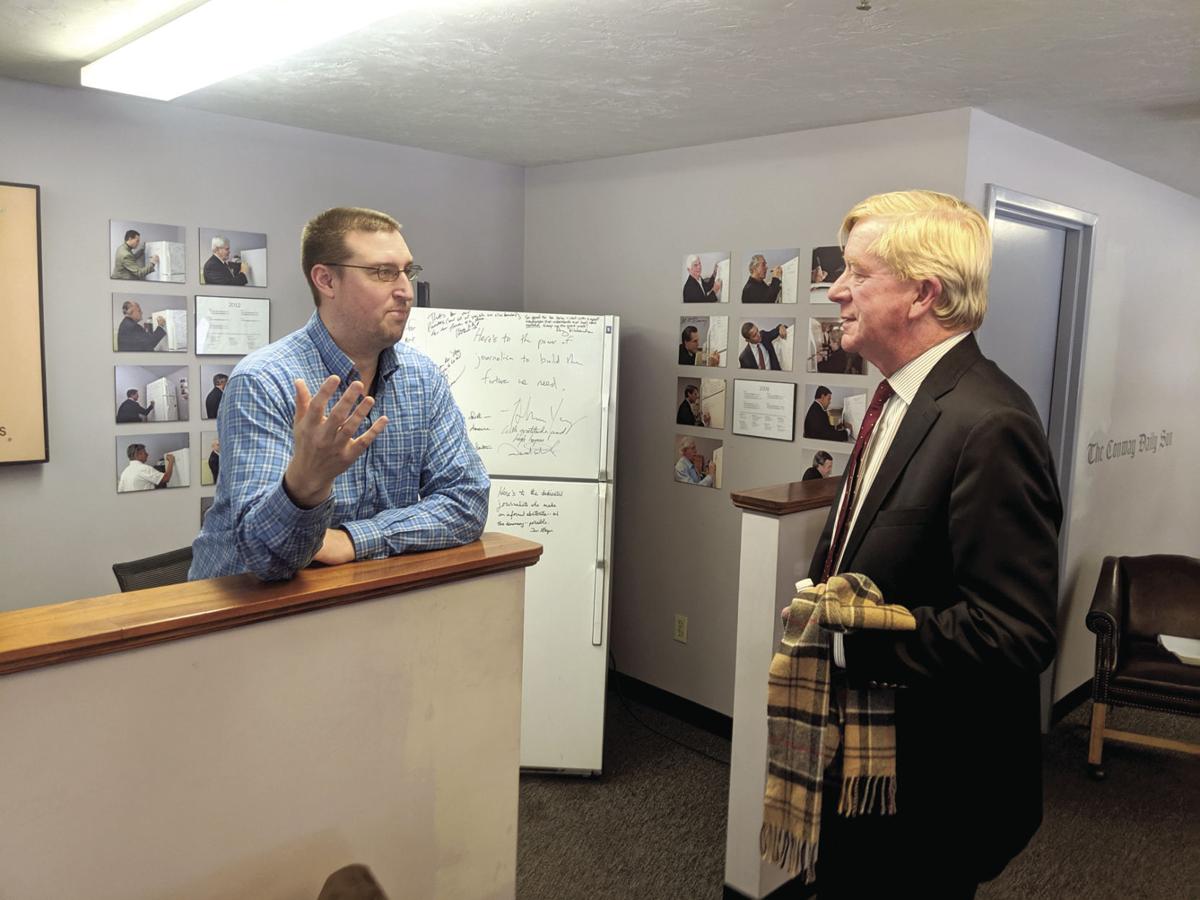 CONWAY — Tune into the History Channel tonight (April 24) at 8 p.m., and you’re sure to see familiar faces. That’s because Episode 12 of the “Ancient Aliens” show is spotlighting “Aliens and the Presidents,” and features Conway Daily Sun interviews.

Throughout the campaign season, the Sun asked every presidential candidate that came through the newsroom about the possibility of looking into UFOs.

The show “Ancient Aliens” debuted in April 2010, and history.com describes it this way: “’Ancient Alien’s explores the controversial theory that extraterrestrials have visited Earth for millions of years. From the age of the dinosaurs to ancient Egypt, from early cave drawings to continued mass sightings in the U.S., each episode in this hit series gives historic depth to the questions, speculations, provocative controversies, first-hand accounts and grounded theories surrounding this age old debate. Did intelligent beings from outer space visit Earth thousands of years ago?”

Thanks to its famous UFO question posed of every presidential candidate that came to New Hampshire this election cycle, the Sun showed up on the History Channel’s radar, earning it an appearance on “Aliens and the Presidents.”

The show is 42 minutes long and rated TV-PG. It first aired on the History Channel last Saturday and is up next tonight (Friday, April 4) at 8 p.m. The show is also available to watch online at history.com.

Regarding Episode 12, history.com says: “The White House has consistently denied having any knowledge of alien craft visiting Earth, but presidential encounters with UFOs and other strange phenomena can be found going all the way back to George Washington. Is it possible that extraterrestrials have been monitoring — and even influencing — America’s presidents?’”

Following a segment with FOX newsman Tucker Carlson, the show turns its attention to the Sun and the New Hampshire Primary (which, although he is no longer running, was won on the Democratic side by Bernie Sanders of Vermont).

“As the 2020 election year begins to heat up, several of Donald Trump’s presidential challengers are asked by New Hampshire-based reporter Daymond Steer of The Conway Daily Sun where he or she stands on the issue of UFOs and government disclosure,” says the narrator.

The Sun has asked this question of the candidates since Granite Stater David Fravor made headlines in 2017 for claiming he encountered a UFO while flying a fighter jet for the Navy off the West Coast in 2004. Other Navy men have come forward about that encounter and others since then.

Buttigieg, who came to the Sun on Jan. 3, said he didn’t think humans were alone in the universe. Sanders, who visited Jan. 19, about a month ahead of the Feb. 11 primary, said that if reports of UFOs are true, they might yield insight into green technology.

Meanwhile, on her Dec. 30, 2019, visit, Klobuchar said: “I think one of the things a president could do is to look into what’s there. What does the science say? What does our military say?”

The Sun asked George Cleveland of Tamworth about the show. He is the former grandson of U.S. President Grover Cleveland and a UFO enthusiast.

“It was great to see Daymond and our friends at the Conway Sun featured so prominently at the start of the show. People may chuckle, but it’s good to see our local paper staying on top of the UFO issue, especially considering our proximity to the location of the best known incident of the modern era — the Betty and Barney Hill encounter,” said Cleveland. “And of course, I am not allowed to discuss the Grover Cleveland UFO papers.”

“Ancient Aliens” isn’t alone in picked up on the Sun’s curiosity about UFOs.

On its weekly “Approval Matrix,” New York Magazine rated Klobuchar’s comments on UFOs to be both “high brow” and “brilliant.”

Las Vegas newsman George Knapp, who broke the Bob Lazar/Area 51 story back in 1989, featured an interview with me with video and an article featured on mysterywire.com in March.

The Sun’s interview with another former Democratic presidential candidate, Sen. Michael Bennet of Colorado, in December was mentioned in a lengthy article in Popular Mechanics, titled, “Inside the Pentagon’s Secret UFO Program.”

The Sun’s UFO question also was the topic of a story on Motherboard, a tech website owned by Vice, in February.

That article was headlined: “This Reporter Keeps Asking Presidential Candidates About UFOs and It’s Amazing.”

“I’ve never seen a UFO or an alien,” I told Motherboard. “UFOs have always fascinated me and because of the revelations from the Nimitz case, I feel like UFOs could be one of the greatest news stories of our time, and I want a piece of it.”