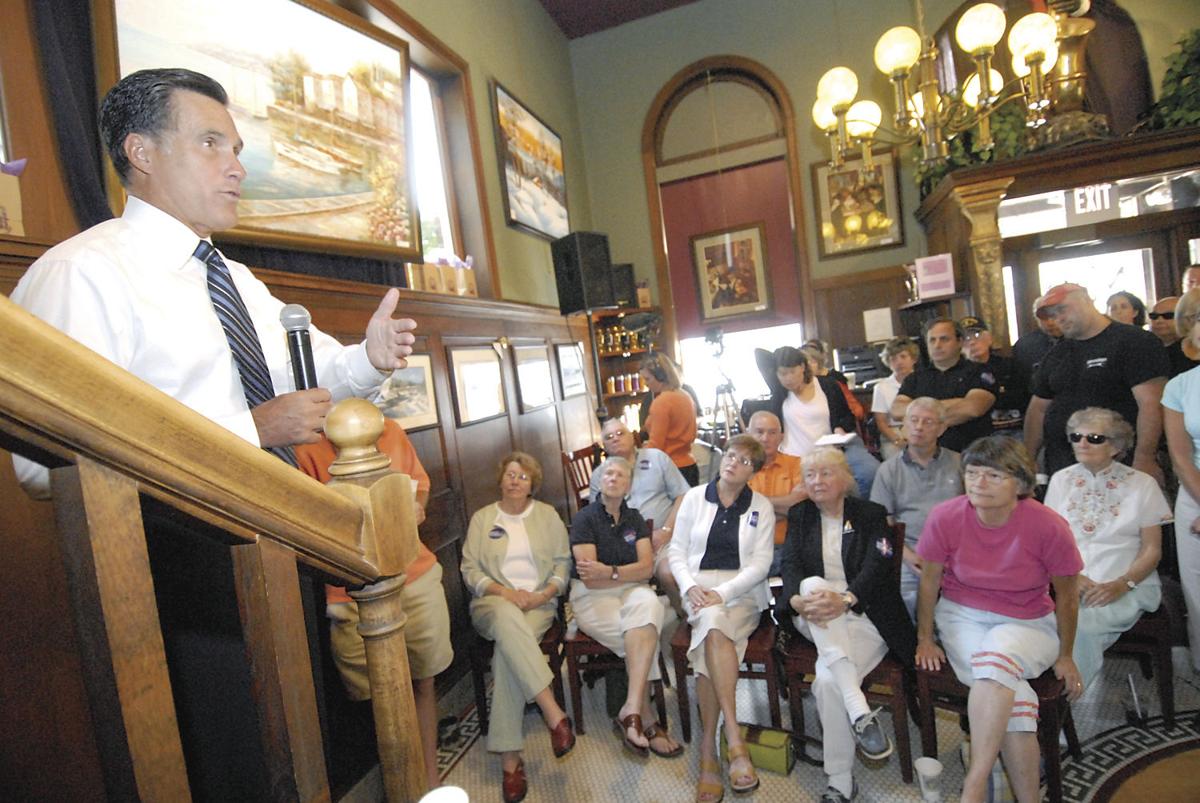 Utah Republican Sen. Mitt Romney, seen at a campaign stop at The Met Coffeehouse in 2007, won praise for his integrity from many and criticism from some Republicans for his lone Republican vote to convict Republican President Donald Trump this past Wednesday. (JAMIE GEMMITI PHOTO) 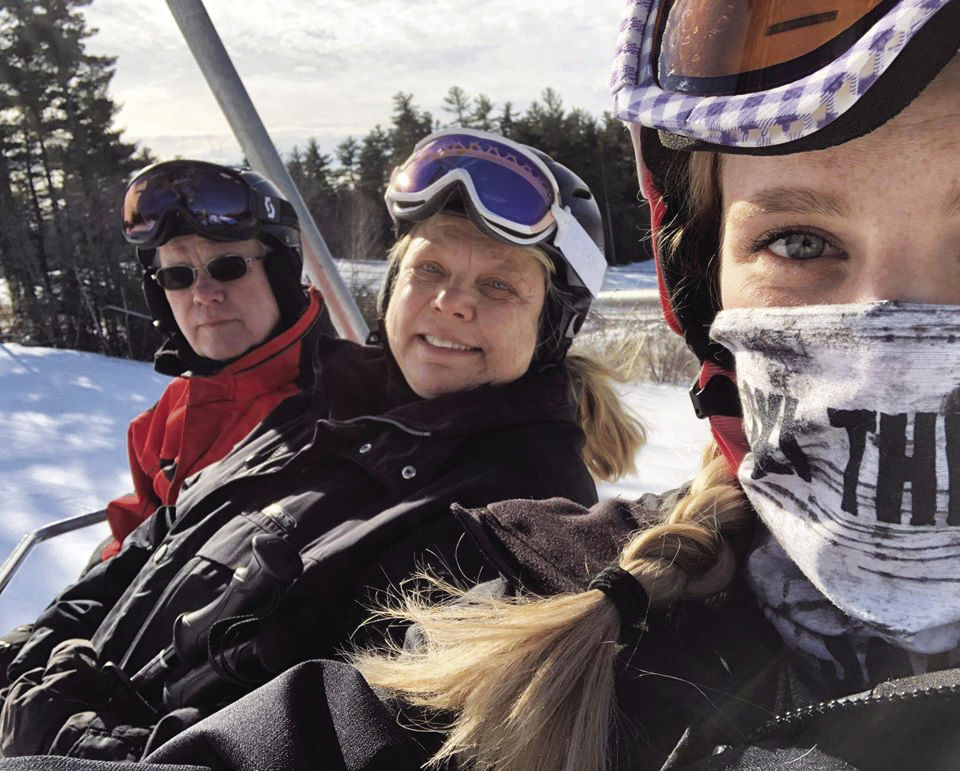 Kudos this week to veteran Cranmore Mountain Meisters racer Ingrid Carlson De-Witt (center) of Silver Lake, shown with husband Mike and daughter Heidi at Cranmore Wednesday. Ingrid who returned to skiing Wednesday after being off the boards since last March 27 when she tore her ACL skiing at Jay Peak. Equipped with a brace, she made wide turns on the sunny Meisters race course, slower than she is used to, but nonetheless showing grit and resolve. (COURTESY PHOTO)

Utah Republican Sen. Mitt Romney, seen at a campaign stop at The Met Coffeehouse in 2007, won praise for his integrity from many and criticism from some Republicans for his lone Republican vote to convict Republican President Donald Trump this past Wednesday. (JAMIE GEMMITI PHOTO)

Kudos this week to veteran Cranmore Mountain Meisters racer Ingrid Carlson De-Witt (center) of Silver Lake, shown with husband Mike and daughter Heidi at Cranmore Wednesday. Ingrid who returned to skiing Wednesday after being off the boards since last March 27 when she tore her ACL skiing at Jay Peak. Equipped with a brace, she made wide turns on the sunny Meisters race course, slower than she is used to, but nonetheless showing grit and resolve. (COURTESY PHOTO)

SO, WHAT A CHALLENGING week this has been for the nation, regardless of your political leanings.

Let’s hope for New Hampshire to once again do its job of picking not corn, like Iowa, but presidents as we head down the home stretch to this Tuesday’s first-in-the-nation presidential primary.

After the fiasco of Monday’s results-troubled Iowa caucus, the world is truly watching what we voters do here in the Granite State to select a top candidate in the crowded Democratic field.

After that dismal performance, some are calling for doing away with the Iowa caucus, which would be great for our primary, which is celebrating its 100th anniversary of being the first-in-the-nation primary for presidential elections.

As the online NH Journal noted, “The results of the Iowa caucus are in. Winner? New Hampshire!”

It’s going to be interesting to see how the race pans out in the next few days following the virtual tie at the top of the results in Iowa between Sen. Bernie Sanders of Vermont and former South Bend, Ind., Mayor Pete Buttigieg. Sanders’ campaign claimed victory based on the popular vote; Buttigieg also declared victory.

According to a Boston Globe/Suffolk University poll released Friday, Sanders leads the pack in New Hampshire with 24 percent support, while Buttigieg is close behind at 23 percent and Massachusetts Sen. Elizabeth Warren is third with 13 percent. Former Vice President Joe Biden is fourth at 11 percent and Minnesota Sen. Amy Klobuchar in fifth at 6 percent. Others with smaller showings were Rep. Tulsi Gabbard (4 percent) and entrepreneur Andrew Yang (3 percent), the latter of whom will be at Kennett Middle School Sunday night from 7:30-9 p.m.; and businessman Tom Steyer (3 percent). Not showing much support in the poll were former Massachusetts Gov. Deval Patrick and Sen. Mike Bennet of Colorado.

As readers saw, the Sun endorsed Sanders in an editorial on Wednesday.

Of course, many people are still undecided — so stay involved, get informed, watch the rallies (whether on TV or in person) and be sure to vote on Tuesday.

Yours truly will be up in Hart’s Location at midnight Monday night for the first-in-the-nation polling. I love the tradition, which it shares with Millsfield and Dixville Notch.

ALL THIS IN A week that saw the Republican-controlled Senate’s acquittal of President Donald Trump, followed the next day by a very partisan State of the Union address by Trump, in which he awarded the Presidential Medal of Freedom to conservative radio show commentator Rush Limbaugh and turned away and did not shake Democratic House Speaker Nancy Pelosi’s hand after his speech, after which she ripped up her copy of his speech.

Republicans didn’t like it, but many Americans saluted Utah Republican Sen. (and 2008 and 2012 presidential candidate) Mitt Romney for showing true political courage by voting to convict No. 45 of abuse of power, becoming, as The Washington Post reported, “a lone voice of dissent in a Republican Party that otherwise has marched in lockstep with the president throughout the impeachment proceedings.”

Amazing to see such integrity in today’s polarized political environment.

IN OTHER NEWS, friends gathered at Delaney’s Hole-in-the-Wall on Tuesday afternoon and early evening to express their condolences to Kathleen Donovan and sons, and to celebrate the life of late former Cranmore operations director and past N.H. state parks regional director Kevin Donovan, who passed at age 70 on Jan. 29 at home in Intervale.

MWV Hog Hall of Famer David Cianciolo of Badger Realty served as an eloquent master of ceremonies and praised Kevin as a “unique special person who possessed a variety of talents, ranging from high-end management skills as well as human resources.”

“Kevin was not just the boss; he was a leader, coach and innovator of creative ways to examine and solve problems,” said David. He added that Kevin “built stadiums and moved mountains, whatever it took to get the job done,” referencing Mud Bowl’s Hog Coliseum with other volunteers in 1981, Cranmore’s Equine Classic stadium the first year it was held in 1985 before the event was moved to Attitash, and helping to replace the bleachers at the former Cranmore Tennis Stadium in 1990.

Among those in attendance were former Cranmore General Manager Marilyn Miller, who called Kevin her “rock” during their years of working together, and former Cranmore Booth Creek era GM Ted Austin, who came over from his and Martha’s home in Norwich, Vt., to pay his respects. Paula Sullivan Jones read a note from husband Fred Jones, who was out of town and unable to attend, with Fred saluting his longtime friend, Kevin, for his leadership at the mountain during their years working there together.

IN OTHER GATHERINGS, there was a huge turnout, according to Roy “the Skiing DJ” Prescott and Attitash events director/Delaney’s bartender Corey Madden, at the Cancer Round II fundraiser for Atittash employee Sharon Swanson at Matty B’s last Saturday.

Similarly, Tuckerman Brewing will host a fundraiser Feb. 9 beginning at 5 p.m. for the Morisette family, who lost their belongings in a fire.

There will be an opportunity for photos, autographs, posters and more at the venue. Tickets can be ordered online at mwvstfeb2020.brownpapertickets.com.

GO, ICE EAGLES! See you tonight at the Kennett High Eagles ice hockey game at the Ham against Monadnock at 6 p.m. The Eagles lost to Monadnock earlier this season in an away game in Keene, 2-1.

BLUE SATURDAY AND SUNDAY: The Theater in the Wood tonight at 7 p.m. hosts the John Lackard Blues Band and the Red Parka presents the Juke Joint Devils from 5:30-9 p.m. on Feb. 9.

HAVE A GREAT skiing weekend. After this week’s wintry mix, great weather is in the forecast for today and tomorrow, so make some turns on the ski trails. Punxsutawney Phil, did not see his shadow on Groundhog Day/Super Bowl Sunday, so get ready for some early spring skiing!