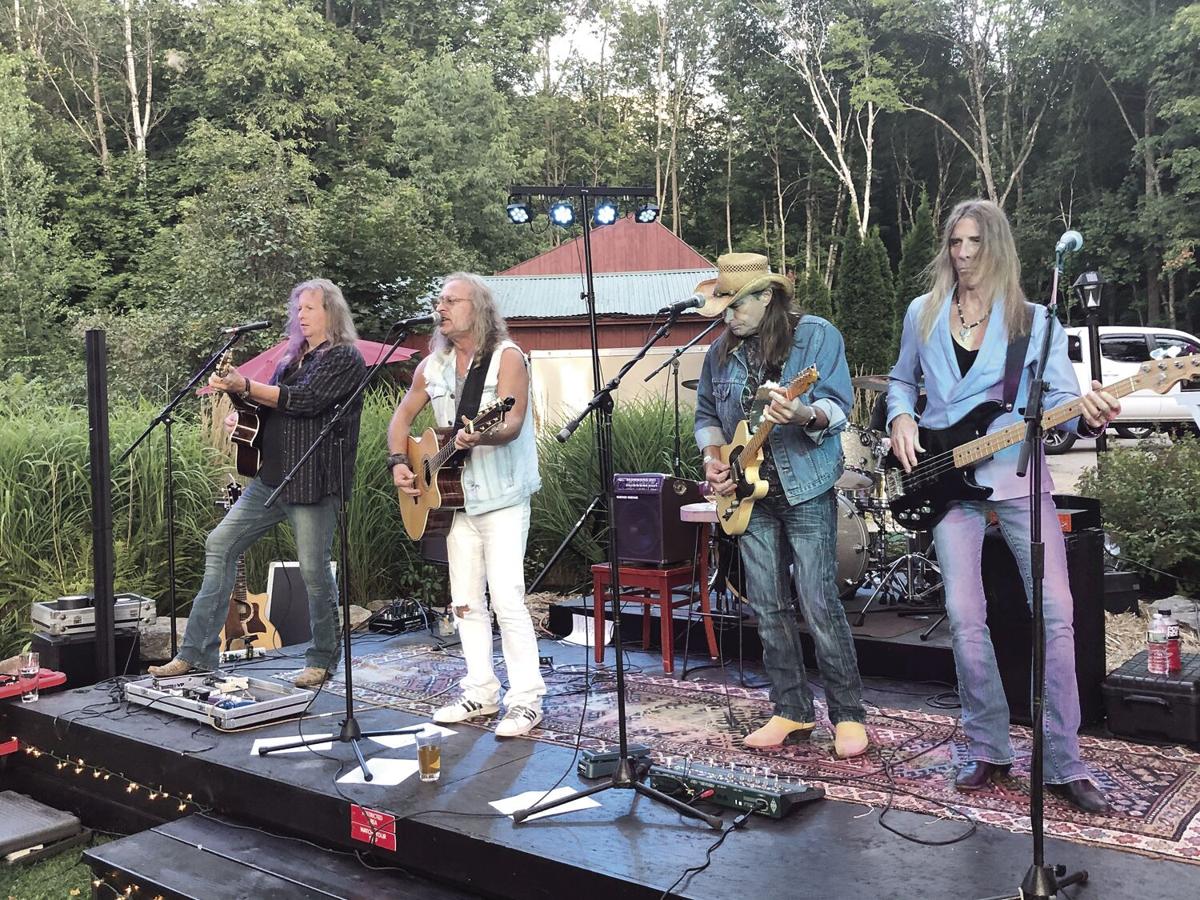 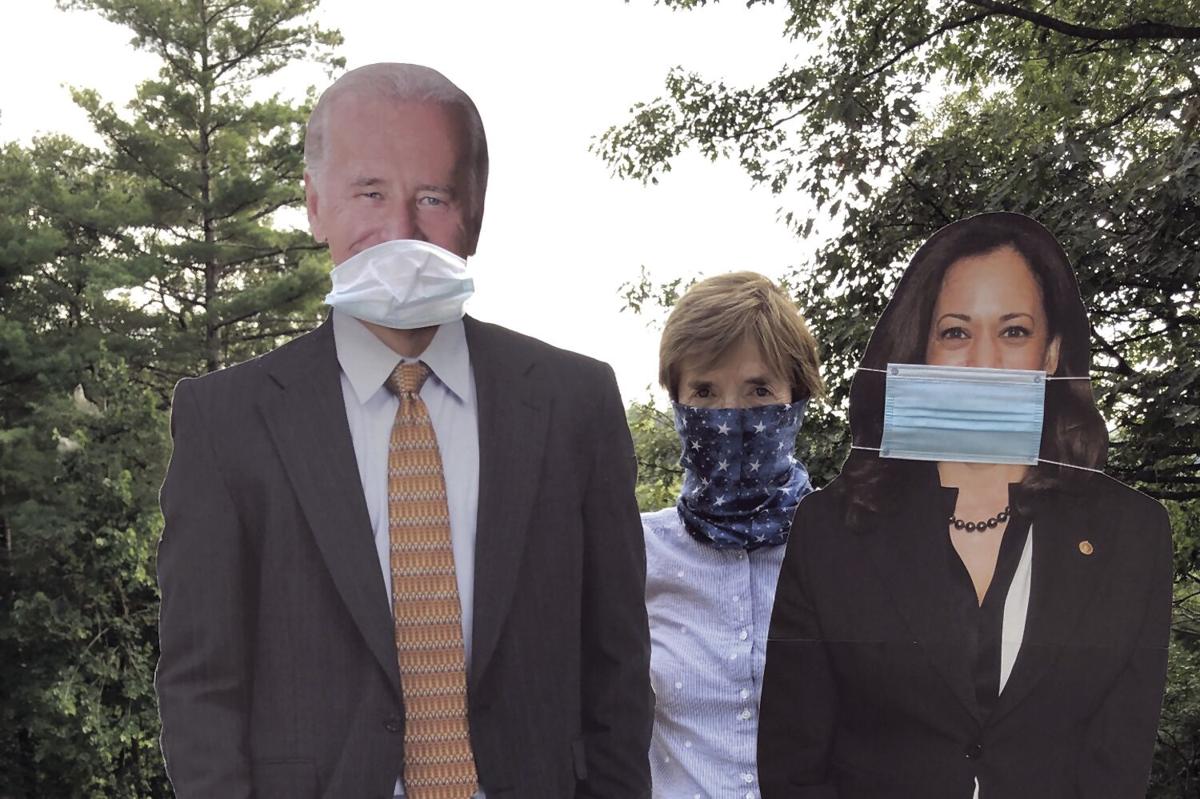 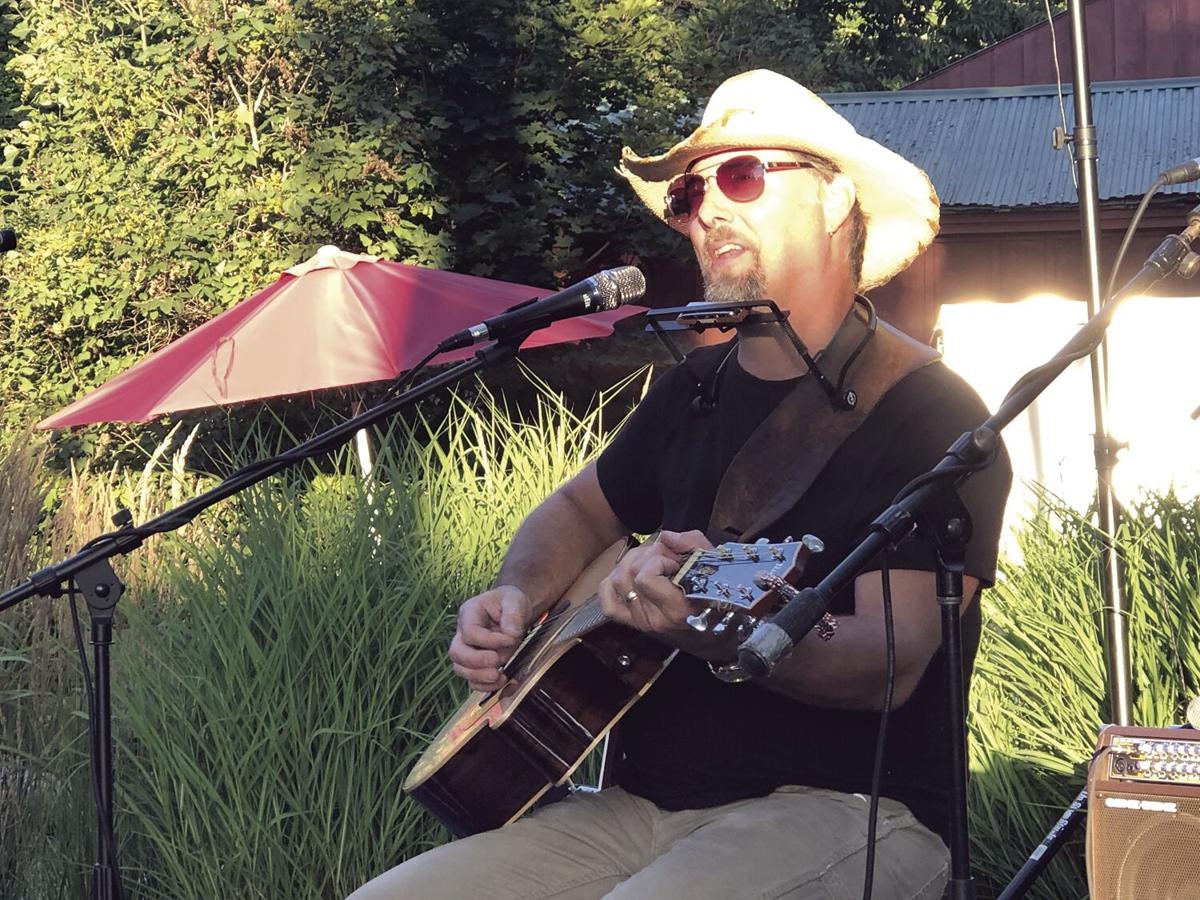 ONCE AN OUTLAW FAN, always an Outlaw fan.

On a beautiful mid-August night Thursday, Wildcat Inn & Tavern dinner guests were treated to a sold-out Cold River Radio Show Mini-Concert featuring local favorite, opener/host Jonathan Sarty and Once an Outlaw at the splendiferous outdoor gardens behind the Wildcat Inn and Tavern.

They performed on a new outdoor stage built by Jonathan, who in addition to being the hardest-working man in local show business, is also a crafty carpenter and painter who has been using those skills during the pandemic to good use given that his once-plentiful schedule of 300 gigs a year have been curtailed due to the constraints on live music by the pandemic guidelines.

“Jonathan and I were outside in the gardens a few weeks ago, envisioning the Outlaws concert, and we looked at that corner and said to each other, ‘Hey — let’s build a stage!” said proprietor Stu Dunlop, who said with the stage/porch on the tavern’s Igloo building now gives the gardens two possible stage venues.

“I have always wanted to do outdoor music. the pandemic virus has allowed us to do that as people love the Wildcat for music,” said Stu.

This past Thursday night, two special acoustic shows were presented with dinner seatings at 5 and 7 p.m.

With limited seating to 50, everyone sat socially distant at their gardens tables, and staff and guests alike wore face masks with guests required to wear them upon entering and when leaving their tables to go to other tables or to the restroom.

The group was led by guitarist Chuck Farrell of Tuftonboro (who can also be seen with Jon Butcher, James Montgomery, Barry Goudreau of Boston band fame, the Shadow Riders and Bruce Marshall).

Comprising the band were members of the Marshall Tucker Band, The Outlaws, Foghat, Southern Rock All-Stars and Blues Project.

Chuck said me a few weeks ago when we first talked about the concert that Once an Outlaw started when Chris Anderson of the Outlaws, AJ Vallee of the Southern Rock All-Stars and Farrell (along with members of the Peacheaters) hooked up for a run of New England shows last fall. It was so well received that a 20-date summer/fall Northeast tour was scheduled. Like many other tours in 2020 it got torpedoed.

Chuck said the group added bassist Jeff Howell, formerly of the group Foghat, to the line-up when he filled in on a show in Albany, N.Y. After some discussions and gentle persuasion, he became a permanent member.

The final piece to the puzzle came with Chris Hicks of the Marshall Tucker Band. Chris was scheduled to do a 30-date farewell tour with Charlie Daniels and Marshall Tucker in 2021. With the passing of Mr. Daniels recently, Hicks had an open schedule.

Hicks and Howell already knew each other from their time in the Outlaws and when he heard of the new project things just came together.

“Stu Dunlop  and the folks at the Wildcat have always treated us just wonderfully,” said Chuck, “including when we performed at the Wildcat last October with Chris Anderson and Bruce Marshall and before that with the Shadow Riders. I just love performing and spending time in the MWV. I'm glad we were able to return the favor this year.”

They played such Marshall Tucker Band classics as “Fire on the Mountain,” “There Goes Another Love Song,” “This Ol’ Cowboy” (one of my favorites) “Hurry Sundown,” “Old Friend,” “Ghost Riders,” “Can’t You See” and “Green Glass.”

The music alone would be enough of a treat, given how starved we all have been here in the valley since mid-March when the pandemic hit, but the food prepared by Executive Chef Bryant Alden, newly inducted into the American Academy of Chefs (as we wrote about a few weeks back) and staff was the icing on the cake, with my guest Joy Orff Frankio and I once again enjoying the exquisite lemon sole stuffed baked shrimp and scallops — the coup de gras was the new Tin Can Co. food catering trailer being run by Chef Bryant and wife Patti Alden, which served up delicious strawberry and blueberry crepes for all the dinner guests.

“Patti and her crew will be serving their crepes at our Hoot Nights on Tuesday nights,” said Stu.

He told me he enjoyed breakfast with the band Friday morning, and they were ecstatic with the setting and grateful for the chance to play before a live audience again.

“We’ve got Al ’The Rev’ Shafner and The Revones Aug. 29 and Jonathan is talking with jazz-blues guitar great Duke Robillard about a show in September. We are also speaking with Jeanne Mason of Mountaintop Music about a show, also in September, so we’ll let everyone know,” said Stu.

OF COURSE, in addition to the Wildcat, socially-distant live music continues outside on the patio Fridays and Saturdays at the Red Parka Pub, Thursdays outdoors at Max’s at the Snowvillage Inn and from 3-6 p.m. Fridays, Saturdays and Sundays at Tuckerman Brewing Co. in Conway and at the Shannon Door Pub on the patio from, Friday and Saturday, with Riley Parkhurst there tonight from 6-9 p.m.

Tuckerman features the local rock bands Rek-lis, today and the Riley Parkhurst Project Sunday and the Simon Crawford Band next Friday, Aug. 28, Chimera Aug. 29 and Rek-lis again on Aug. 30. Go to tuckermanbrewing.com for the schedule.

ON THE RESTAURANT SCENE: As has been well-reported, it’s been a crazily busy pandemic summer here in the valley for local outdoor outfitters, restaurants and shops as we locals welcome visitors but ask them to try exercising some good manners and not to trash our local much-beloved resources.

The MWV Chamber has started a campaign asking people to be courteous when they come and to wear masks to protect our front-line industry workers.

Makes sense, no matter what political tribe you are part of, right?

DO YOU HAVE GREY POUPON? Best story I have heard this summer concerns the Shannon Door Pub when Renee Hawkes was serving a couple from out of town earlier in the season outdoors at the tables set up in the parking lot.

As the story goes, according to Renee’s father-in-law BJ Hawkes, the woman guest asked Renee for fresh ground pepper and Mediterranean sea salt, and Renee returned with a salt and pepper shaker, to which the woman allegedly replied, “Oh, that’s not what I asked for, but I guess you only get those in a high-end establishment,’ to which Renee reportedly said, "That’s fine, Ma’am, but you do realize you’re dining in a parking lot?"

ENJOY THESE fleeting days of summer — and native corn! With the virtual Democratic convention behind us, now the Republicans have their week. Lots at stake this election season, so tune in and study up, American voters!