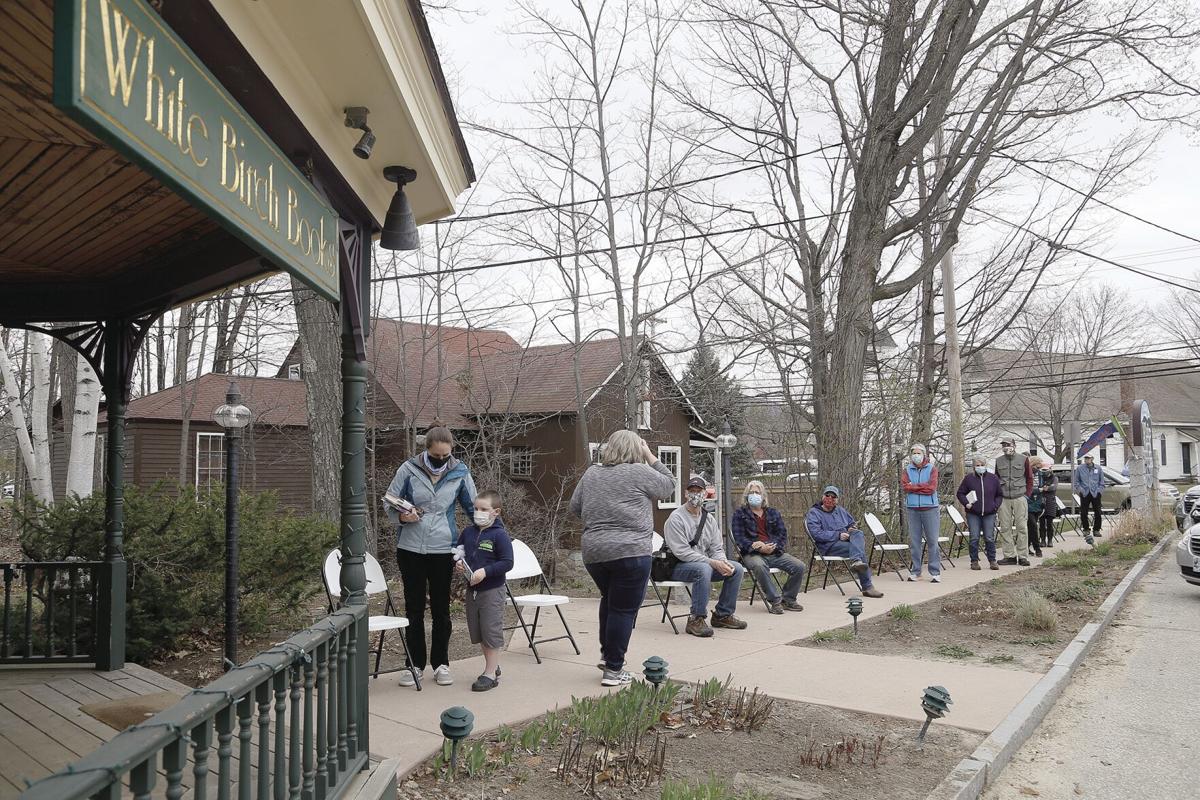 The line for a book signing with Mark Synnott hosted by White Birch Books stretches all the way to the road and around the sidewalk Thursday afternoon. (RACHEL SHARPLES PHOTO) 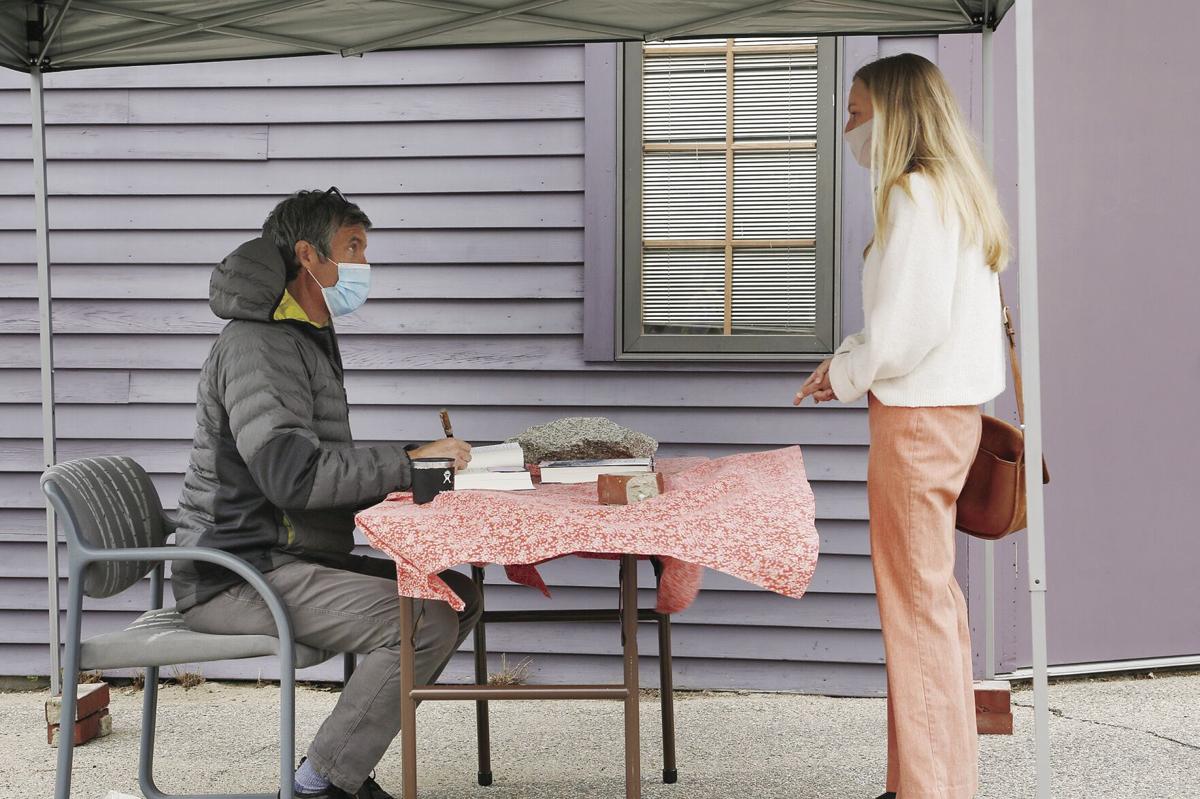 Mark Synnott chats with Jena Linder of Glen while signing her copy of his new book, “The Third Pole” at Thursday’s author event at White Birch Books in North Conway. It was the first in-person signing the bookstore has held since February 2020. (RACHEL SHARPLES PHOTO) 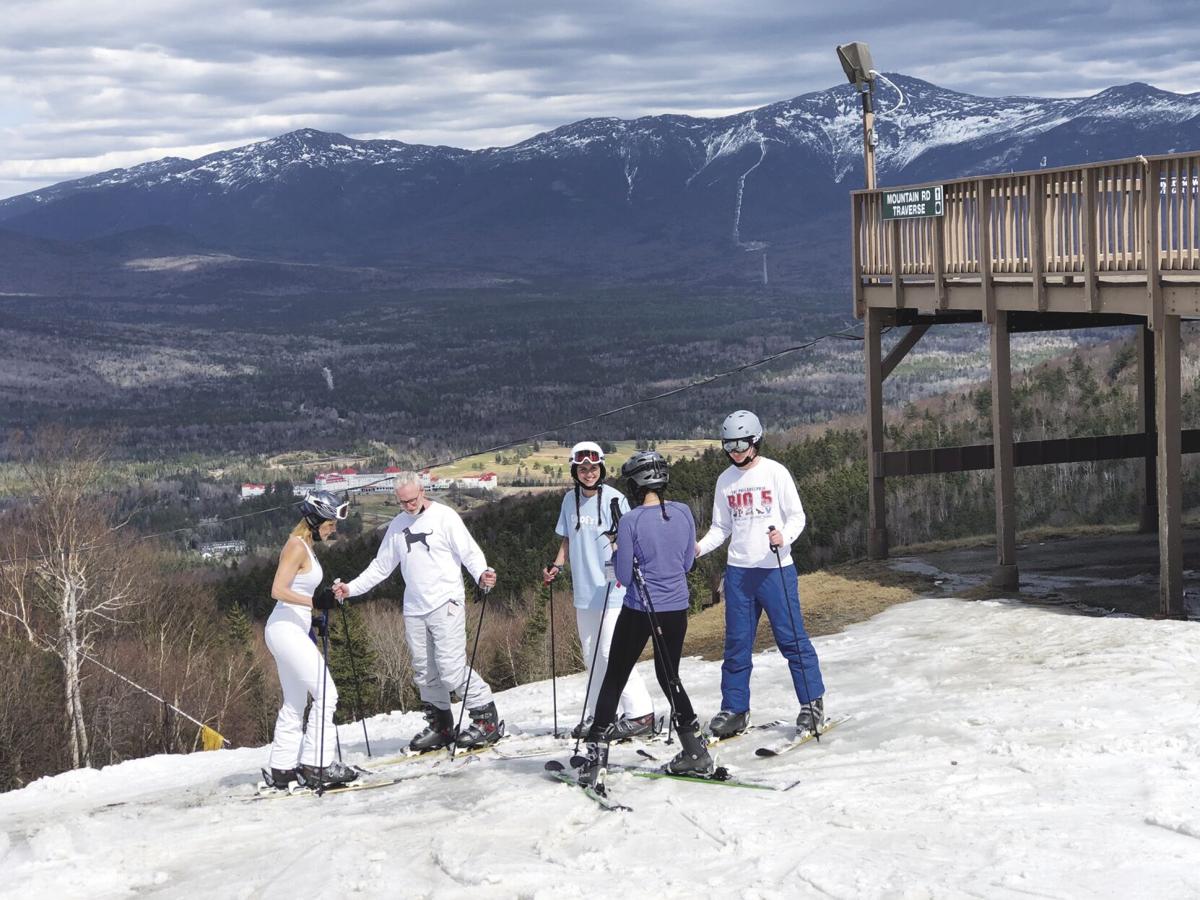 A family of skiers enjoys the last weekend of the season at Bretton Woods, taking in some spring ski runs in the 70-degree temperatures last Saturday. (TOM EASTMAN PHOTO) 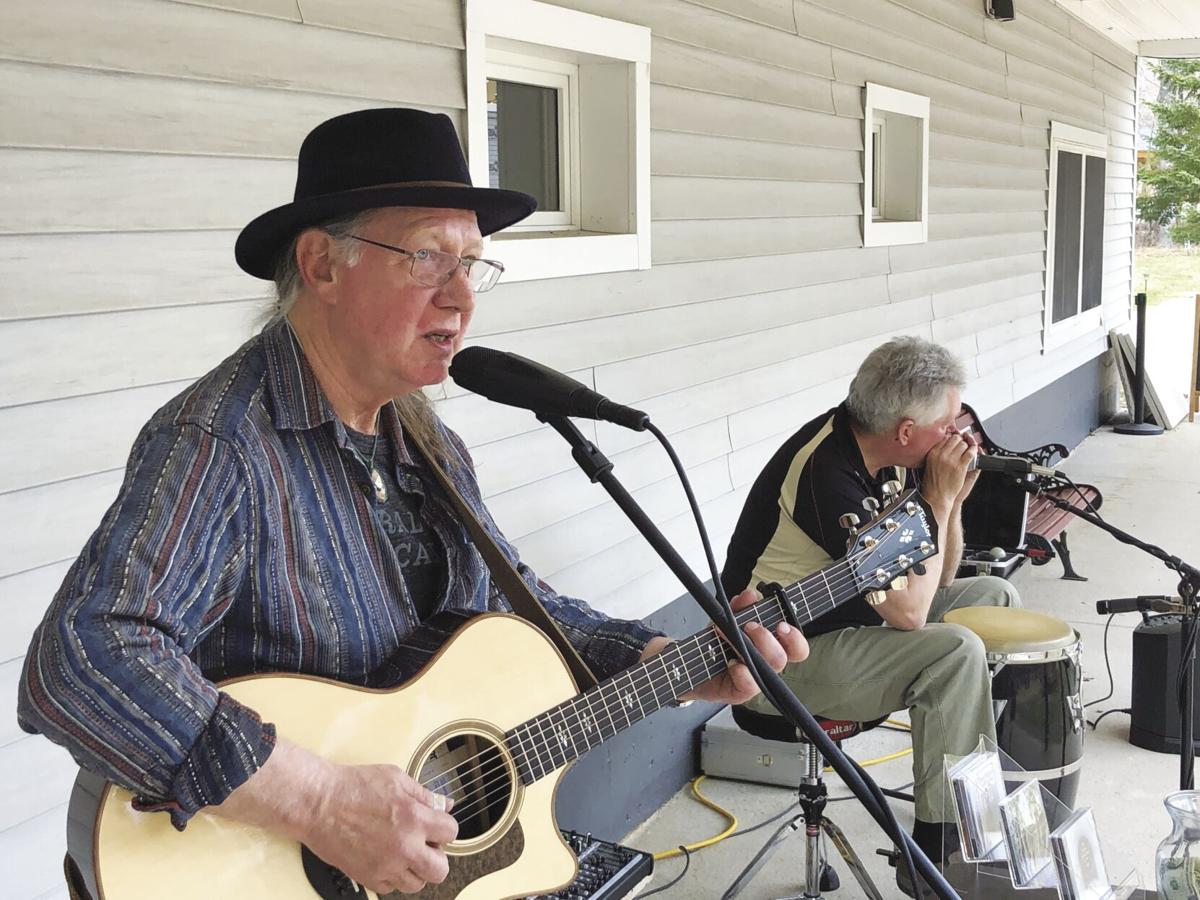 The line for a book signing with Mark Synnott hosted by White Birch Books stretches all the way to the road and around the sidewalk Thursday afternoon. (RACHEL SHARPLES PHOTO)

Mark Synnott chats with Jena Linder of Glen while signing her copy of his new book, “The Third Pole” at Thursday’s author event at White Birch Books in North Conway. It was the first in-person signing the bookstore has held since February 2020. (RACHEL SHARPLES PHOTO)

A family of skiers enjoys the last weekend of the season at Bretton Woods, taking in some spring ski runs in the 70-degree temperatures last Saturday. (TOM EASTMAN PHOTO)

APRIL FOOL’S CAME a little late this year with Friday’s nor’easter, which created havoc with the daffodil crowd and caused a temporary chill in everyone’s spring gardening, replacing our rakes and hoes with shovels we thought were safe to put away.

Although a bit of a nuisance, it’s not that unusual to get snow in April around here, according to local weather observer Ed Bergeron, who gave Friday’s weather a lowly rating of 10 cents out of a possible 50 cents on WMWV 93.5-FM’s “Morning Weather Show.”

“I didn’t go to the bottom of a nickel because we need the moisture,” Ed said.

EVEREST BOOK SIGNING: It was great to see the line of (masked and socially distanced) people outside White Birch Books in North Conway on Thursday afternoon, as they waited to get their copies of Jackson's Mark Synnott’s excellent new book, “Third Pole: Mystery, Obsession, and Death on Mount Everest," autographed by the author.

It was the first live event the store has presented since February 2020, before the pandemic. But with proper precautions, it went off without a hitch.

“It went incredibly well. The weather cooperated, and it felt like old times to see so many friends in person,” said bookstore owner Laura Cummings.

She estimates they sold about 145 of the books, with another delivery from the publishers on its way.

She said they also got calls for more book orders after Mark appeared on National Geographic’s Backstage program earlier Thursday afternoon, during which he was interviewed by his editor, Peter Gwin.

Because of the pandemic, the national book tour that had been planned by Penguin Random House has been put on hold for now, making Thursday’s book signing especially newsworthy.

In addition to being interviewed by the Sun, Mark also was interviewed Tuesday morning by Laura Knoy on NPR’s “Exchange” program (tinyurl.com/24ha7588) and on WMWV by Roy “The Skiing DJ” Prescott  (tinyurl.com/29csf3pu).

Thom Pollard of Bartlett, a 2016 Everest summiter and 2019 Everest National Geographic climbing team member — with whom Mark concocted the idea for their joint Everest adventure in pursuit of solving the mystery of Sir George Mallory and Sandy Irvine and whether they reached the summit in 1924 — also has a great conversation with Mark on his Happiness Quotient podcast No. 76 (tinyurl.com/6xdbem5j).

I encourage you to check them all out. And buy the book.

As National Geographic describes the book, “This is no ordinary adventure story. It crosses geographic, economic, social, and political lines with a team of dreamers, highly trained professional athletes, and agents working to keep some of Everest’s secrets concealed forever.”

In a phone conversation with Mark on Friday afternoon, I asked how he was taking in all the good reviews and the experience of launching the book in these pandemic days.

“It was really great to see everyone come out. Some people said they had read my first book ('The Impossible Climb: Alex Honnold, El Capitan, and the Climbing Life') and they wanted to get this one, too,” said Mark, as-down-to-earth and unaffected by all of the attention as ever.

“I have to tell you,” he continued, “when you do an event, you’re kinda putting yourself out there and looking for some affirmation, so it’s really great when people come out.

"I’ve been doing this a long time (as a climber, speaker and author) and I have had it happen when no one shows — I once flew all the way to Atlanta for an event, and that happened, and I have had others, just complete duds! So I really appreciate people coming out like they did Thursday,” Synnott said.

More power to Mark and Thom for sharing their expedition's story. They appeared at a sold-out talk, “Everest, ’91 to ’19," put together by Tyler Ray of Granite Backcountry Alliance in November 2019 at Theater in the Wood with 1991 New England Everest Expedition leader Rick Wilcox of International Mountain Equipment.

To have three summiters in our valley is a big deal. Add Ellie Koeppel of the Wentworth's brother Mickey, who summitted Everest twice, and it's even more impressive.

IN TRIBUTE: I’d like to publicly extend my condolences to the Sherman family on the passing of WBNC/WMWV co-founder Joanie Thanhouser Sherman, 91, whose obituary, beautifully written by her daughters, was published by the Sun on Friday.

Along with husband Skip, with whom she won the MWV Economic Council's prestigious 2000 Bob Morrell Award for civic entrepreneurship, she was a force for good in this valley, sponsoring the Garden Trail and numerous arts endeavors.

I TOOK a marvelous Hawaiian-shirted ski outing to Bretton Woods last Saturday on the day before closing with friend Mark Guerringue, and we enjoyed the mashed potato snow and summerlike temperatures.

In honor of New Hampshire Craft Brewers Week, ongoing through today, we stopped at Ledge Brewing in Intervale on our way home, where we enjoyed the music outdoors of old friend Jono Deveneau and Doug Hazard. Very pleasant to be outdoors (wearing masks) and soaking in the sun. May it return sooner rather than later.