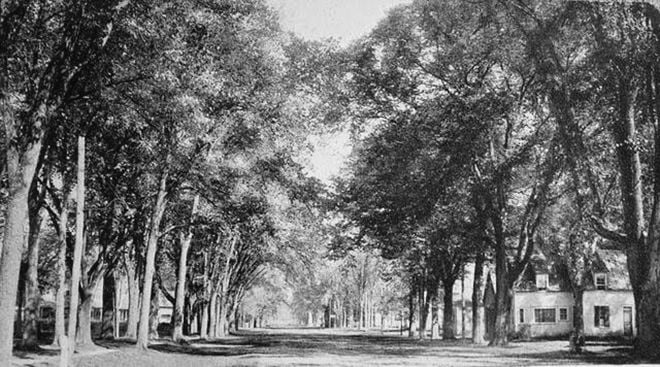 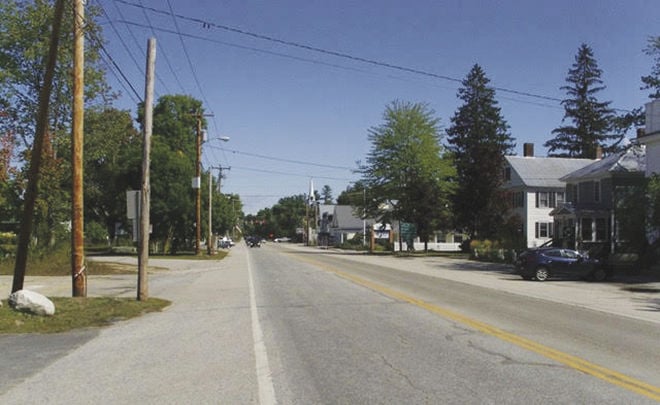 Anyone who has visited the Fryeburg Public Library has seen Ben Newman’s painting of an idyllic elm-lined Main Street in Fryeburg, Maine.

As the postcard here demonstrates, the painting was not the product of Newman’s romantic imagination. The image was taken between 1902 and 1905, because the John Stevens monument (visible in the center distance) was raised at the end of Portland Street in 1902, and this postcard was sent to Miss Alice Thompson of North Conway on Jan. 9, 1906.

The photographer doesn’t appear to have used a tripod. He just stepped into the road between Edward Hastings’s law office, on his left, and the home of the recently deceased merchant John Locke, on his right.

The buildings behind the trees at left are those of the four-story Hotel Oxford, which was raised on the site of Asa O. Pike’s rambling Oxford House after it burned down in 1887. Every few decades the hospitality industry tinkers slightly with the nomenclature of hostelries, and if the Hotel Oxford still survived it would probably have been renamed The Inn at Fryeburg Village in the 1990s.

As the 19th century began, the Hotel Oxford was under the management of Frank Plummer. Alongside the hotel, Jerome Bickford operated a livery stable that had once been part of the Oxford House. A. O. Pike had run the Oxford House essentially as a boarding house, but Plummer catered mainly to summer sojourners, about 75 of whom were staying there as the 1906 season drew to a close. Most were apparently out and about when a fire on the top floor burst through the roof late in the morning of Aug. 31.

Efforts to subdue the fire were worse than useless, and 72-year-old Alonzo Lewis died from injuries he suffered in the attempt; he fell from a ladder in a futile effort to douse the flames. With little water available to fight it, the blaze spread quickly before a strong southwest wind, jumping to adjacent buildings.

After the hotel and stable, the homes and businesses of lawyer Seth Fife and A. O. Pike’s widowed daughter, Mary Barker, were all consumed: Mrs. Barker and Fife’s wife ran competing millinery stores there.

The fire took nine homes and businesses on that side of the street, as far up as opposite the Congregational Church.

The elms all caught fire, too, and carried the inferno to Portland Street. The old Fryeburg House went up like a match, along with the Bradley, Walker, Evans and Durgin houses, the last of which stood more than halfway down to Warren Street from Main. For a time it seemed that the entire town might burn.

The bucolic scene was changed forever. Despite their size, the elms were too badly burned to survive, and they had to come down. Since the fire, no one has ever seemed to find Main Street worthy of a painting.