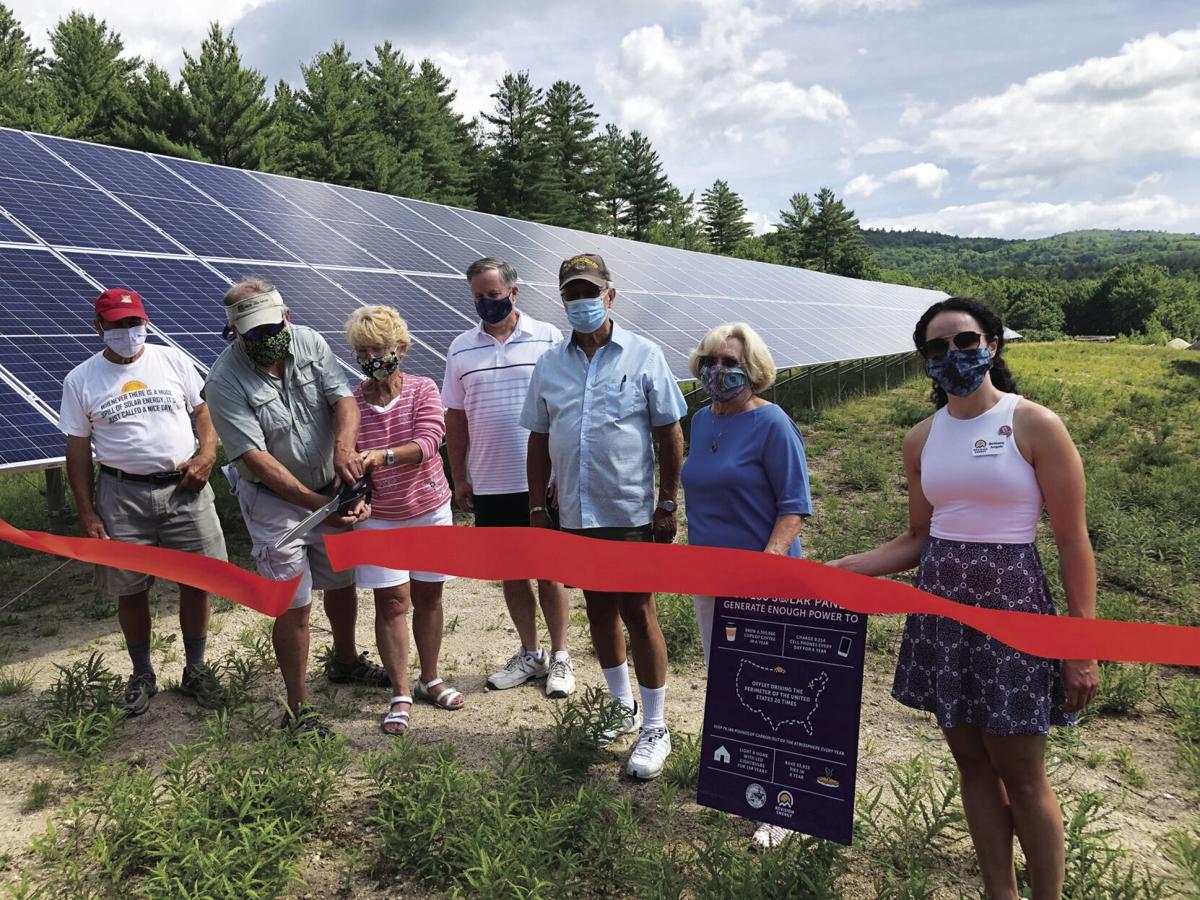 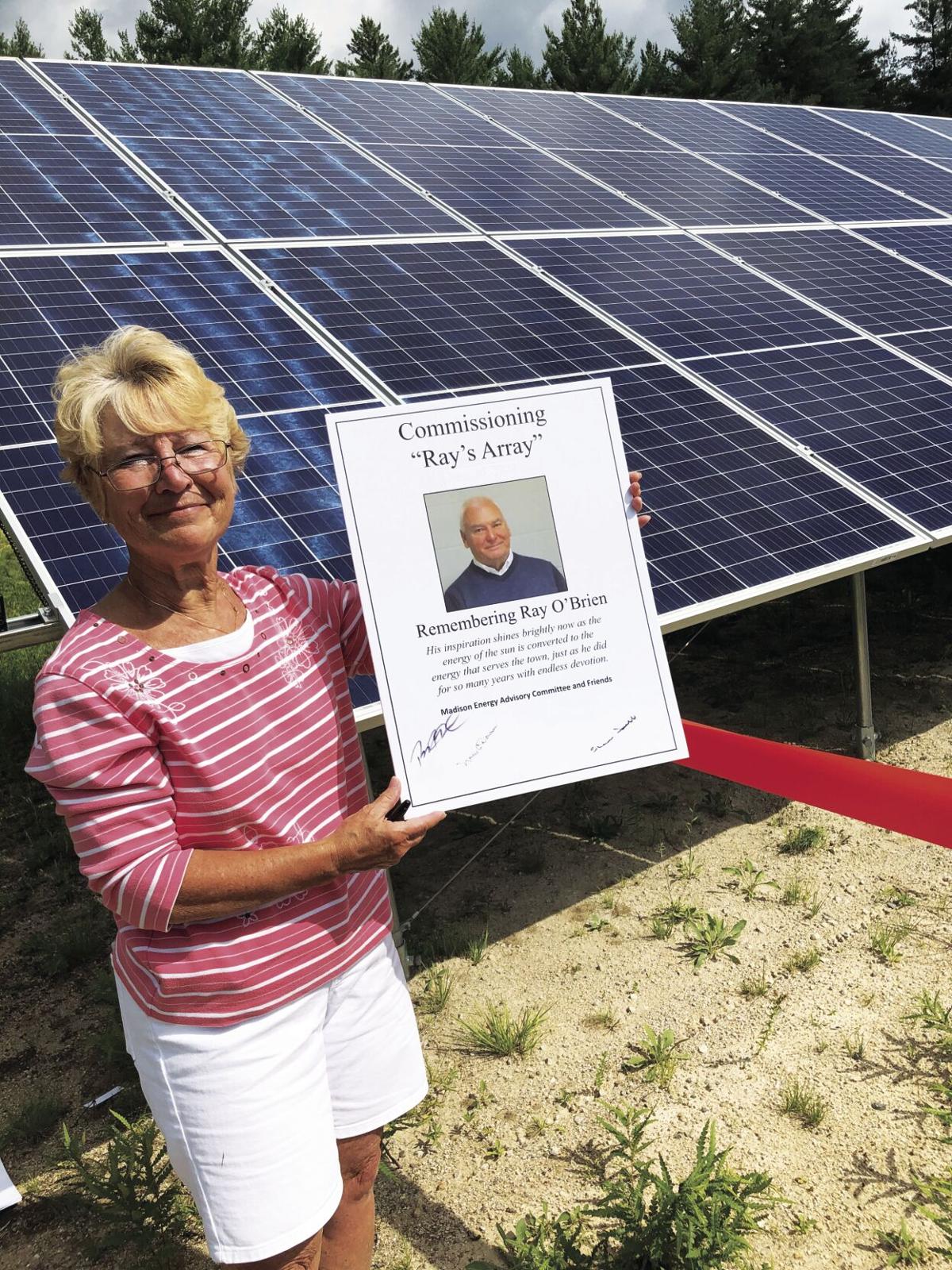 Noreen Downs holds a poster commemorating the late Ray O’Brien’s contributions to the solar effort at Monday’s ceremonies which was signed by those in attendance. (TOM EASTMAN PHOTO)

Noreen Downs holds a poster commemorating the late Ray O’Brien’s contributions to the solar effort at Monday’s ceremonies which was signed by those in attendance. (TOM EASTMAN PHOTO)

“He would be very pleased to have seen this come to fruition and to be acknowledged for his contributions but they have done a lot of work since then. He was very proud to have been part of it,” said Brenda O’Brien, who was joined by her family at the dedication of the new solar array, which was constructed last fall and this spring. It went on line July 2.

Noreen Downs, of the Madison Advisory Energy Committee, chaired Monday morning’s dedication, held behind the town garage, town hall, town fire department, town maintenance garage and library. All the buildings are being supplied power from the 63-kilowatt, 180-photovoltaic panel solar array, which was installed by ReVision Energy and will produce more than 80,000 kilowatt-hours of solar electricity each year.

She recognized fellow advisory committee members Russ Dowd and Lanoie, as well as Madison Selectmen Bill Lord and John Arruda, Revision Energy’s Brittany Angelo and Jill McLaughlin and Chuck Henderson, local representative for Sen. Jeanne Shaheen, for being present at the ceremony, which was attended by about 17 people.

“Back in 2013, Ray O’Brien, Russ Lanoie and I were part of the MWV Citizens for Energy Efficient Communities. We asked selectmen if they would be interested in having some analysis done on town buildings for energy efficiencies. We went before the town legislative body in 2014 and they approved the establishment of the energy committee. Ray O’Brien was the chair. At the end of 2014, we put together quite a list of timeline projects and half of them have been completed,” said Downs.

She said that at the end of 2018, the committee decided to look further into solar and did analysis of the energy efficiencies of Madison Elementary School and town buildings — she said the school was mired at the time in other projects concerning maintenance, however, and was not in a position to embrace the solar project; but, she sad, the committee put out a request for proposals focusing on town buildings.

Voters at town meeting last year approved a warrant article that authorized selectmen to enter into a lease agreement with a third party investor for rentinga piece of town property for the purpose of the installation of a ground-mounted solar array.

She said the Energy Advisory Committee will track the progress of this project in hopes that one day a similar project can be recommended for the elementary school, adding that the project is expected to save on the overall cost of electricity for years to come while providing a positive impact on the environment.

“What you see here today is the result of that effort. It took us about a year and a half for the paperwork which was finished in 2019 fortunately before the pandemic and the installation was completed a few weeks ago and actually turned on July 2. It is producing quite a bit of power which can be followed on a website. It is doing a fabulous job,” said Downs.

She said in addition to herself, Lanoie and Dowd, the committee also consisted of Selectman Bob King and Sloane Jarell, the latter two of whom were not present at Monday’s dedication.

“We were the five folks who were pretty involved with this project,” said Downs.

He also praised the vision of O’Brien in wanting to lead Madison’s alternative energy efforts, noting that as a teacher and community leader, O’Brien’s legacy was to plant seeds — the fruits of which townspeople are celebrating today with the new array.

“For me, this project represents Ray’s legacy of a person who fostered and promoted a learning culture,” said Dowd, who used to host O’Brien’s school classes on field trips to Pine Tree Power where he underscored that Pine Tree wasn’t about creating energy — it was about converting energy, a lesson that O’Brien explained to his students in terms that would stay with them.

Speaking on behalf of Shaheen, Henderson said that “Each successfully completed community solar project helps town committees and project champions to do the homework, gain the confidence, build consensus and go forward with their project. Today, we honor one such project champion by dedicating the project to Ray O’Brien. Ray approached the challenges of changing our energy use with boundless curiosity, perpetual excitement and the conviction that we can make the world a little better by working together to get something done.”

Angelo in her remarks said ReVision Energy “is honored to work with the town n the project.”

Those involved with the project signed a Madison Energy Advisory Committee and Friends poster, “Commissioning Ray’s Array,” which carried a photo of O’Brien, along with the following words: “Remembering Ray O’Brien: His inspiration shines brightly now as the energy of the sun is converted to the energy that serves the town, just as he did for so many years with endless devotion.”

According to a press release, the project was installed under a power purchase agreement, so there is no upfront cost to the town.

Under a PPA, an investor owns the solar array and sells electricity to the town at a discounted price over the utility’s rate.

For the town of Madison, that investor is Blue Haven Initiative, an impact investor dedicated to putting wealth to work for positive social and environmental change. Blue Haven is able to take advantage of a 26 percent Federal Investment Tax Credit and equipment depreciation write-offs that the municipality cannot take because it doesn’t pay taxes.

The town benefits because it can purchase the facility in the future at a reduced cost instead of owning it from day one. At the start of year six, the town can purchase the installation from Blue Haven at a fair market value, normally around 60 percent of the original cost. After the purchase, the town owns all the power generated. This project is estimated to save the Town of Madison almost $370,000 over the 40-year lifespan of the system, according to Angelo of ReVision Energy of Maine and New Hampshire.

“Madison is the first community in the valley to build a solar system for its town use,” said Lanoie after the meeting.

For more, go to madison-nh.org.