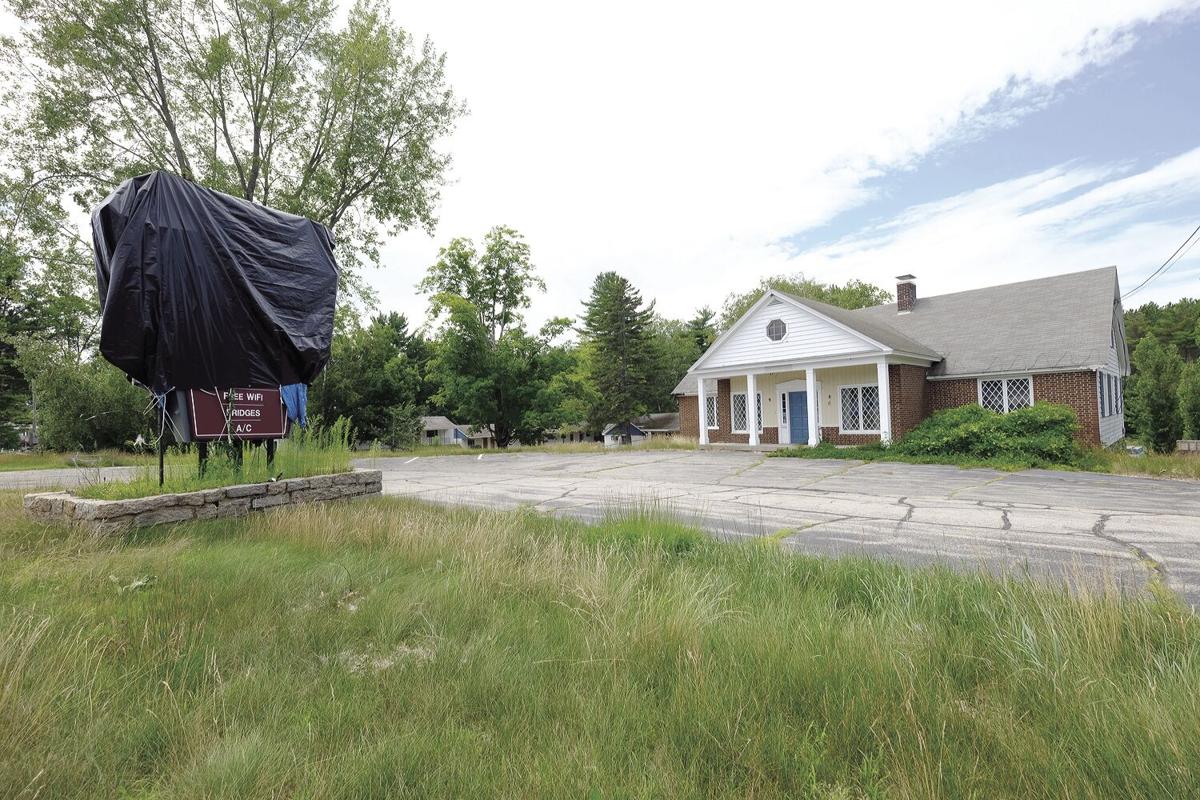 The former Junge’s Motel in North Conway is seen Tuesday. Plans for the property approved by the Conway Planning Board last Thursday include a hotel, restaurant and bank. (JAMIE GEMMITI PHOTO) 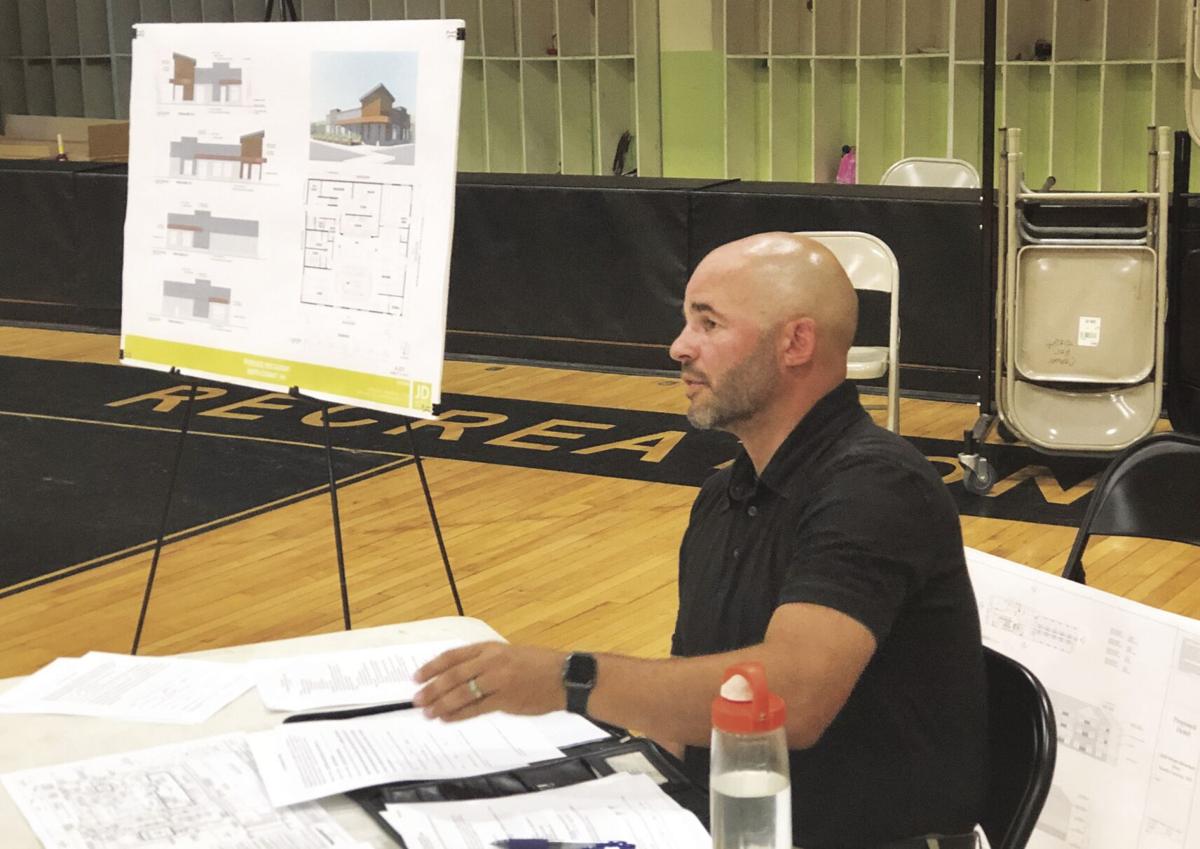 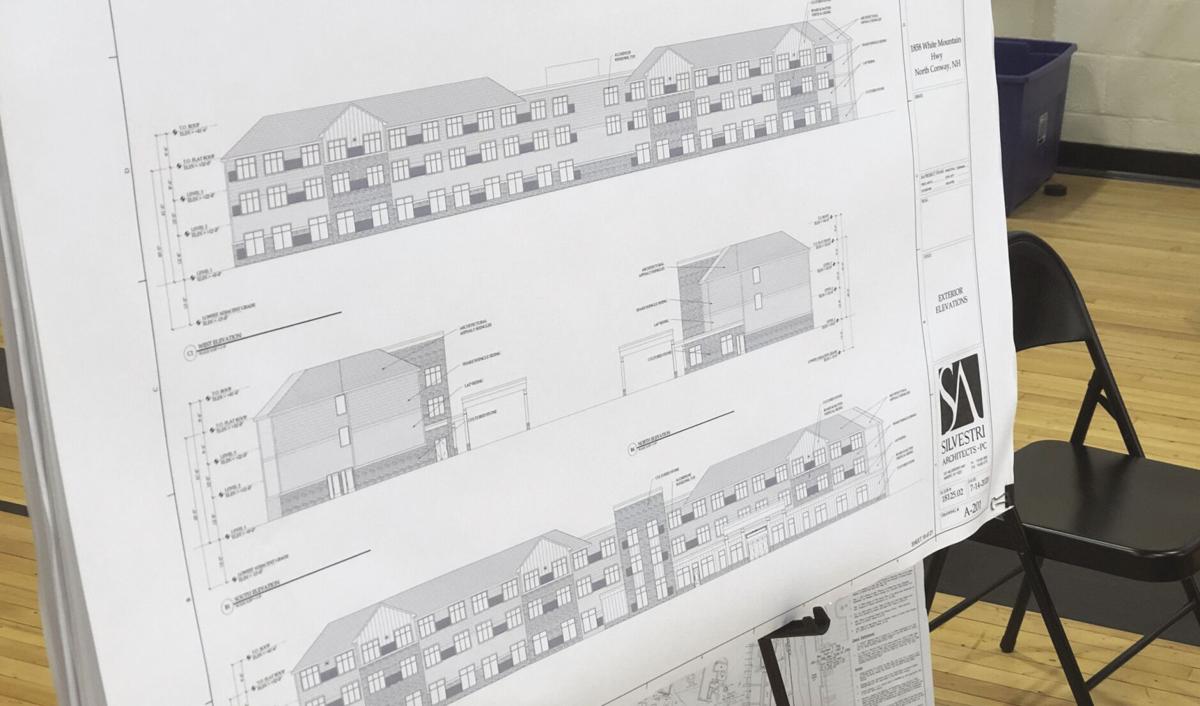 Elevations of the proposed hotel at the Junge’s Motel site in North Conway were presented to the Conway Planning Board last Thursday by HEB Engineers. (TOM EASTMAN PHOTO)

The former Junge’s Motel in North Conway is seen Tuesday. Plans for the property approved by the Conway Planning Board last Thursday include a hotel, restaurant and bank. (JAMIE GEMMITI PHOTO)

Elevations of the proposed hotel at the Junge’s Motel site in North Conway were presented to the Conway Planning Board last Thursday by HEB Engineers. (TOM EASTMAN PHOTO)

CONWAY — The Conway Planning Board gave unanimous conditional approval last Thursday to plans that would demolish the closed Junge’s Motel and put up a new hotel, restaurant and bank on the property at 1858 White Mountain Highway in North Conway.

The site totals about 5.1 acres and consists of two lots — one containing the closed motel, long a landmark on the strip, and the other an adjacent field. The board OK’d a lot merger at the developer’s request.

The 1950s-vintage motel was owned and operated by the Junge family, which sold the site and adjacent lot in 2018 and early 2019, respectively.

According to Earl Wason of Wason Hospitality Associates of Portsmouth, Jamsan Management Hotel Group — the Massachusetts-based company that is also developing the four-story, 80-room Home2Suites and restaurant near the juncture of Routes 302 and 16 — is involved with the Junge’s project along with other partners.

Asked why there had been a delay since March 2019, Wason said the buyers had been negotiating for a Fairfield-branded hotel, which is now going to be built at Cranmore Mountain Resort sometime within the next few years.

Ashok Patel of Jamsan also is part of the ownership group at the nearby Fox Ridge Resort in North Conway. Patel told the Sun in January 2019 that his company bought the 136-room, 31-acre resort from Red Jacket Resorts of Yarmouth, Mass., and undertook renovations to transform it into a year-round resort.

Envisioned on the Junge’s site are a 22,808-square foot, three-story, 114-room hotel; a 5,800-square foot restaurant space; and a 2,500-square-foot bank space with associated infrastructure.

According to project engineer Josh McAllister of HEB Engineers of North Conway, now that the approval has been received, he would expect his client to begin construction in fall 2020, with a planned spring/early summer 2022 opening.

Early site-plan review by the planning board began in March 2019, according to McAllister

The delay in returning to the board for continued site-plan review, he told the board at the July 23 meeting in Marshall Gym at the Conway Parks and Recreation Department inside Kennett Middle School, involved revisiting curb cuts with the state Department of Transportation as well doing a traffic impact study that HEB will be finalizing “within the next few weeks.”

Instead of three curb cuts on the site there will now be two, he said.

“Each entrance will consist of two exit lanes and one entrance for both curb cuts,” said McAlister.

The town requires connecting drives between commercial properties, but abutter Jan Filip of the Golden Gables Inn during public input said he does not want to have an interconnected drive with the property.

McAllister said when he first came to the planning board in 2019, his client was not sure who the tenants would be. McAllister said he now has that information but was not at liberty to divulge the branding of either the hotel, bank or restaurant.

Selectmen’s representative Steve Porter asked that McAllister convey to his client that townspeople would like to see the blue tarp hanging across the old Junge’s Motel sign be removed and also requested that the client mow the grass.

McAllister said he would convey those wishes to his clients.

According to McAllister, the 5.1-acre site has a sloped gradient leading down to the railroad tracks in back.

At the 2019 site-plan review sessions, then board member (now alternate) Ray Shakir wanted to have the hotel site perpendicular to Route 16, but McAllister had explained that due to the lot’s gradient, it would be difficult to achieve.

At those earlier sessions, board members also expressed dissatisfaction with the front facade of the proposed design of the hotel as well as with its flat roof.

McAllister in Thursday’s presentation showed that he and his client’s architect had listened to those concerns as the new proposal shows a front facade that is broken up by different design elements to add variety to the appearance. It also now has a faux pitched roof.

“There will be shingles with certain architectural elements to the roof to make it appear to be pitched even though it will be flat,” McAllister said.

He said the two ends of the long building will be broken up to look like separate buildings with a different look for the middle section.

He said a retaining wall will be built along the railroad tracks.

Although board members appeared to like the hotel’s modified plans, board member Earl Sires Jr. raised questions about the design of the proposed restaurant at the north end of the property.

Citing town regulations that promote “New England architecture,” Sires said he did not feel the proposed design meets that standard.

McAllister explained that the design, one that is being embraced throughout the country, incorporates New England materials along with more contemporary components.

Sires and fellow board member Sara Verney Frechette cast the two negative votes on that part of the project, with the board passing the restaurant design, 4-2.

In other business, the board ruled that site-plan review was not required for a request from Chuck Henderson to convert 1,400 square feet of light industrial space to office space at his former Chuck Roast Equipment facility at 90 Odell Hill Road, Center Conway. They unanimously ruled it was not a significant change of use.

In addition to a day care and offices for photographers, tenants also will include the administrative offices of Starting Point: Services for Victims of Domestic Violence and Abuse.

The board is next scheduled to meet Aug. 13 at 7 p.m. For more, go to conwaynh.org/planning.